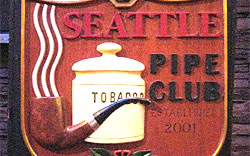 The Seattle Pipe Club held their 10th Anniversary Dinner on January 29, 2011, and PipesMagazine.com’s Publisher, Kevin Godbee, was there to cover the gala event.
Highlights of the evening were legendary VIP guest speaker Clive Dunhill who flew in all the way from London. (There were other guests, including the author, that flew in from across the country, including members from the NY Pipe Club.) The event included the traditional “Lighting of the Clay Ceremony”, gourmet food, silent auction, live auction, speeches and awards. Mr. Dunhill made a fantastic presentation that was extremely entertaining, and which we have video footage of included here.
The Seattle Pipe Club is one of the largest, most active, and well-funded of all the pipe clubs across the nation. Although, they do not put on their own annual pipe show, like some of the other clubs do, you can usually find their members at all of the pipe shows in every part of the country. They are quite active in the hobby nationwide. They celebrated their annual dinner & auction on Saturday January 29th at Smokey Joe’s Cigar Lounge in Fife, WA.

Because of the statewide ban on smoking in public places, the club is still able to legally enjoy smoking their pipes on Puyallup Tribal land where Smokey Joe’s is located. For all of the club’s meetings, and the 10th Anniversary Dinner, Smokey Joe’s provides a welcoming & relaxing atmosphere, with an excellent tobacco lounge, comfy leather chairs & sofas, tasty food, a gorgeous mahogany bar and adult beverages of your choice, including a impressive selection of single malt Scotch.

The 5-hour event started with the silent auction and drinks from the full service bar, which was open throughout. After the silent auction, club co-founder and noted author of “Confessions of a Pipeman“, Gary B. Schrier led us all in the “Lighting of the Clay Ceremony”. Each attendee received a clay pipe specially made and marked to commemorate the Seattle Pipe Club’s 10th anniversary. Everyone also received a 50-page souvenir photo book chronicling the 10-year history of the club. There was literally pounds of free tobacco to go around as well.

There’s a great 5-minute “highlight reel” video of the event, where you can watch the “Lighting of the Clay Ceremony” and see other parts of the event here.

Awards were presented after dinner.

), Scott Bendett (PipesAndCigars.com), and Tony Soderman (President, Great Northern Pipe Club).
Here are four videos of Clive Dunhill’s presentation with each one becoming more entertaining and fun as they progress.
[HTML1]
[HTML2]
[HTML3]
[HTML4]
After Mr. Dunhill’s presentation, the live auction was held, pipe smoking continued throughout, and an amazing time was had by all. Thanks to the entire Seattle Pipe Club for their hospitality, and to club President, Matt Guss for sending me his personal invitation to attend.
About the Seattle Pipe Club:
The Seattle Pipe Club was formed ten years ago by Matt Guss, Gary B. Schrier, and Ron Butler. It has now grown to 200 members. The age ranges of members run the gamut from early 20’s, middle-aged, up to finely aged mature gentlemen. There are women members as well, and even a cat! The club even has their own tobacco blender, Joe Lankford, and three of the blends are packaged in tins and available for purchase at PipesAndCigars.com. The blends are Mississippi River, Plum Pudding, and Seattle Evening.
SeattlePipeClub.org
More Photos of the Event
Video Interview with Gary B. Schrier in Las Vegas at the West Coast Pipe Show