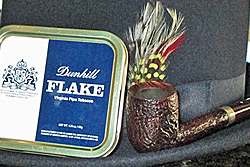 It sounds like a book title, doesn’t it, "Dreams of old Virginia?" For all I know, it could be, but for the purposes of this article it has to do with the smoking of Virginia tobacco. I was browsing through the forums here at Pipes Magazine.com and found one titled, "The art of smoking Virginias." The entries were very interesting. Before I decided to write this article I had only smoked Dunhill Virginia Flake. My friend Ted ( check out his Facebook page here) gave me a tin and I didn’t like it the first time I tried it because it seemed to be so mild that there wasn’t much flavor. After smoking it a few more times I started to enjoy it. Then I read the forum posts and realized that there were a lot of subtleties to a Virginia Flake. I came up with a plan to find out more about this intriguing tobacco. I would buy a few different brands of Virginia Flake and smoke nothing but those for a couple of weeks to find out what they were all about. Sound like fun? Well it was and I learned quite a bit.

I already had the Dunhill, so I put in an order for three more types of flake. I know there are a lot more out there but time and money, not being on my side, I decided on these. I spent considerable time looking up information on Virginia tobaccos online but didn’t come up with a lot. Not only that, but I had inserted the Wikipedia entry on the subject, not knowing that it is almost completely wrong until my editor informed me. Here is his information on Virginia tobacco.

Just the name alone can be confusing. Ironically, it wasn’t even developed in Virginia. It originated in North Carolina. It is grown in those two states as well as South Carolina, and Georgia, but N. Carolina accounts for more than half the acreage in 2013, in the U.S., according to the USDA. See chart. 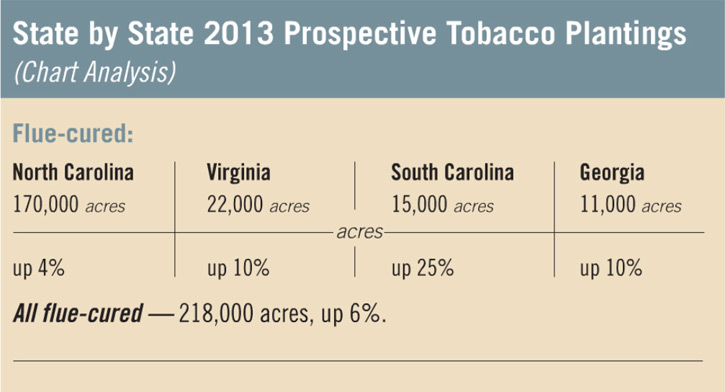 Virginia tobacco was born in the USA, but it is now grown all over the world. Aside from the actual seed strain, and terroir (more on that below), an important defining characteristic of Virginia tobacco is how it is cured. It is Flue-cured. The are special barns that have big tubes (flues) running through them which heat up the air to speed up the curing process. Curing is what gets the ammonia and other nasty stuff out of the tobacco to make it smoke-able.

Another defining characteristic of Flue-cured tobacco is that it is by far the highest in sugar content – almost double the next highest, which is Oriental tobacco. Virginia has about 22% reducing sugars as dextrose, while Orientals have about 12%. There are several types of Virginias, with some of the most popular being identified by the color of the leaf; red, bright, lemon, etc. The color of the leaf is affected by how high or low the leaf is on the stalk. – Kevin Godbee

This month’s "Ask G. L. Pease" article talks about "Tobacco and terroir." Terroir is a term I first came across while learning about wine. It seems to be more of a concept than a ‘thing.’ From Wikipedia again, we have this, on terroir: "Terroir (French pronunciation: [tɛʁwaʁ] from terre, "land") is the set of special characteristics that the geography, geology and climate of a certain place, interacting with plant genetics, express in agricultural products such as wine, coffee, chocolate, hops, tomatoes, heritage wheat, and tea. The concept has also crossed to other Protected Appellations of Origin (PDOs a form of geographical indication), products such as cheeses." And tobacco, I might add. Basically what this means is that the environment can and will affect the taste and other characteristics of growing things. So Virginias grown in various regions around the world can have a wide variety of tastes. If you regularly smoke Virginias, you probably already knew this. I didn’t of course, but I was about to find out.

When my Virginias arrived in the mail I found the box jammed into my mailbox along with my other mail for the day. It was all sticking about two inches out of the mailbox and covered with snow and ice. Thank you, U.S. Postal service. I let them warm up inside and then opened them. One of them was tinned and the other two I ordered an ounce of each in bulk. When I opened them I couldn’t detect much aroma. So I packed them up in mason jars and left them for a day. I noted a considerable difference after leaving them in jars for awhile. I’m not advocating for a certain brand so I’m not going to say which brands smelled or tasted a certain way, but there were a lot of differences between them. I smelled aromas of citrus, grass, nuts, and fruit. One smelled distinctly farm like but I couldn’t put my finger on exactly what that aroma was. They all smelled great, however. Very earthy and natural. Two of them were very vibrant and the other two were less so, a darker aroma, if that makes any sense. All of them had the sweet smell of sugar but definitely more in some than others. Even the color and texture of the tobacco proved to be different with each type. Courser and darker with two of them, lighter and finer with the other two. Keep in mind that I only had four types to go by but it was amazing to me how different these four tobaccos, all the same type, could be. 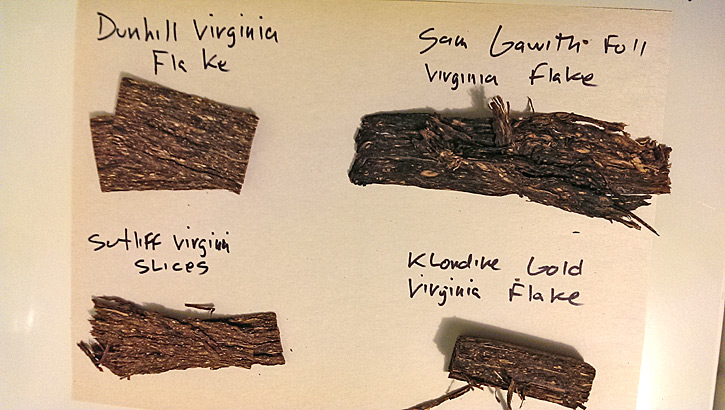 And now for the smoking! I tried them rubbed out, cube cut and rolled and stuffed. (I found that my preference is for cube cut. I think the cutting releases more aromas than the other ways.) Smoking nothing but Virginias for a while really opened my eyes to tobacco flavors. I have smoked cherry and apple and pumpkin spiced aromatics. I have smoked Perique and Latakia English varieties and Balkans. All of those flavors are right "out there," very strong and all very tasty. But with Virginias, you are getting nothing but natural tobacco flavor. It was amazing! A lot of the flavor is very subtle and you have to pay attention or you’ll miss it. When I smoke my pipes I’m usually doing something else as well like reading, writing or listening to the radio. I go lunting while smoking or mow the lawn while puffing on a pipe (or cigar) in the summer. I found however, that to really enjoy the Virginias, I had to just smoke them. Anything else I did took my attention away from the subtleties of the smoke. The sweet taste of the natural sugar, the grassy farm-like aroma of summertime, and the exotic nutty-ness and "darker," taste that made me think of faraway places. I know I’m waxing poetic here, (I have published two books of poetry to prove that I know how) but it just seems to be the right way to describe what I was tasting. All in all, it was a great smoking experience.

When I smoke a pipe I have the bad habit of puffing away like a steam engine. I smoked my Virginias in my briars and my cobs. For me the cobs were much better because they refuse to get very hot and the taste is quite a bit different in them versus the briars. The cobs seem to make the flavors "pop" better. I have one Meerschaum pipe and I smoked a couple of them in it. The taste was very good but again, it got hot like the briars. I needed to sip the tobacco to bring out the variety of flavors and I really had to work on that. By the end of my experiment I was proficient at keeping the Virginias cool enough to have a really great smoking experience. 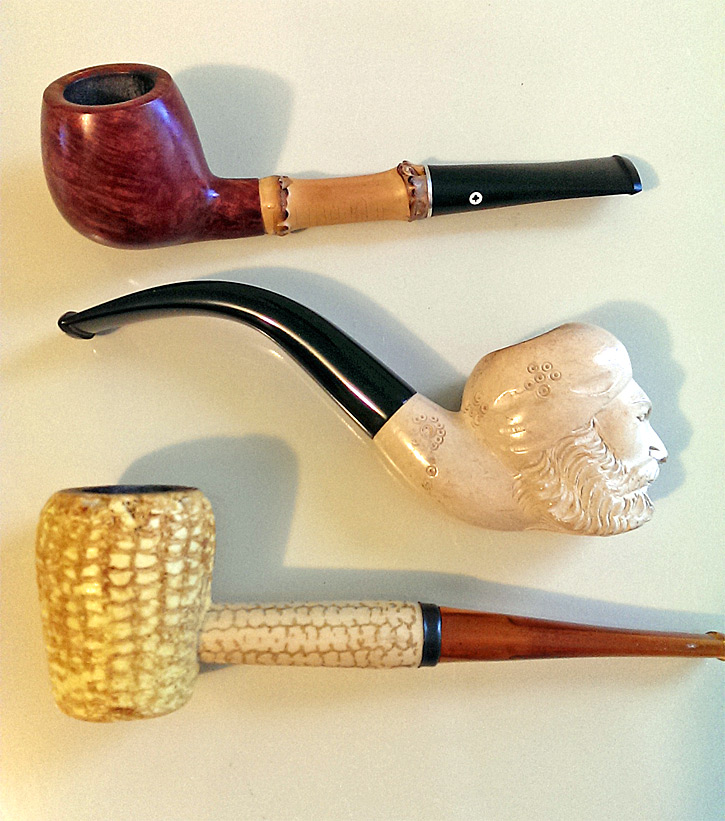 This has really opened my eyes to Virginia tobaccos. The natural flavors of the tobacco were a lot of fun to discover. I have found that I really like the Balkan tobaccos I’ve tried. The Oriental and Latakia flavors are really great and I won’t quit smoking those but I will definitely keep Virginias in my rotation. Anytime you get a number of people together and ask them a single question you will get as many opinions. I would love to hear what you think of this little experiment of mine, so feel free to leave some comments here. And light up those Virginias!

Versatile Virginia
Where Your Tobacco Comes From
Curing Methods and Tobacco Types
Virginia Tobacco NOT from Virginia!?!?!

Virginia Tobacco NOT from Virginia!?!?!