Virginia Tobacco NOT from Virginia!?!?! 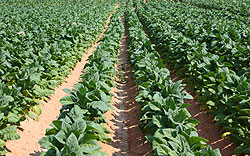 Virginia or Brightleaf or Flue Cured … whatever you want to call it, it’s one of the most widely used strains of tobacco for pipe smokers. You’ll find it in Latakia blends, aromatics and even Virginia blends (who knew?). It’s a versatile leaf with characteristics that make it suitable for a wide variety of purposes, but how much do you know about it?

Virginia flue cured tobacco originally came from … North Carolina. A farmer found that when a batch of leaf was exposed to high heat, the tobacco turned yellow and that it had very desirable characteristics. Over time, a method was developed to be able to consistently grow and cure what became known as Brightleaf. 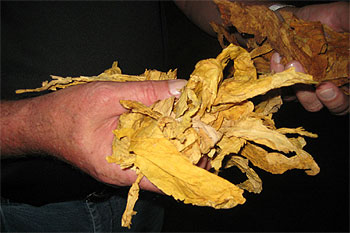 Virginia tobacco has a high sugar content with relatively low oils. This makes Virginia the compliment to Burley, which is high in oil, but low in sugar, so they may both be used in a blend to create balance. There are a number of types of Virginia, and each has unique properties.

Yellow Virginia is usually the sweetest kind, being lemon to banana yellow and having a noticeable acidity to it with distinct citrus notes. Bright Virginia usually is a mixture of yellow and orange, possibly with a bit of red, and is less sharp than yellow, but with a little more depth to the flavor. Orange is a touch less sweet still, and has more of a hay-like quality, and red is more toasty with bread-like notes and noticeably less sugar. The term "brown Virginia" usually refers to matured flue cured. To mature the leaf, heat, pressure, aging or any combination thereof may be used. This normally deepens the flavor and increases the nicotine content. Finally, stoved Virginia is actually (typically) yellow Virginia that is roasted on a metal surface until it turns black. This caramelizes the sugars and brings out a fruitiness that can add a nice dimension to a mixture.

Brightleaf is often used to make flake tobaccos, as the combination of heat and pressure brings out wonderful properties. Many flakes will have a pouch aroma of dried fruits like prune, fig or date, sometimes with a hint of chocolate, or it may even take on a baked goods scent. The flavors of flake pressed Virginia become more intense, robust and deeper with a muted sweetness. Some Virginia flakes pack quite a hefty dose of Vitamin N, although many do not. The Lakeland-style Virginias usually have a "kick". 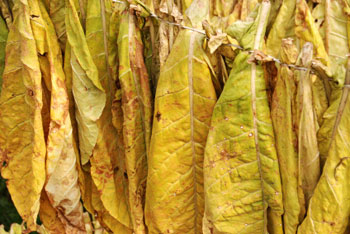 Due to its high sugar content, Virginia can burn a little hot, and if you don’t keep your puffing slow and intermittent, you might wind up with a serious case of leathertongue. This "nip", however, is not the same as tongue bite, which is a cramping type of sensation caused by a chemical reaction. This is one of the reasons that Virginia flakes are popular, as you can slow down the burn rate by keeping the individual flakes more or less intact when loading your pipe. Virginia/Perique blends have quite a following, not only because the combination tastes good, but also because the slow and cool burning Perique can tame the heat of a Virginia quite well.

As I had mentioned earlier, the first recorded examples of Brightleaf came from North Carolina, but it also is grown from Maryland down through the Carolinas, and in other states as well. It is also grown in Canada, a number of African countries, from Central America to Brazil and in Europe and Asia. Since it grows reasonably well in even poorer soil, it is one of the easier strains to cultivate. Of course, the flavor will vary depending upon where it’s produced. American flue cured, for example, tends to be quite sweet, but some of the African is less so, and would be used where a "drier" flavor is desired. How the name "Virginia" wound up being used to describe flue cured Brightleaf isn’t totally clear, as Virginia is only one of many mid-Atlantic areas which produce it, and the state was never the biggest grower of the leaf; but through common use, the name has stuck, so Virginia it is.

Virginia plants are actually very attractive, with beautiful bell-like flowers somewhat like a lily. For general use, the buds are removed to allow more nutrients to go to the leaves. The ones that are left to flower are normally used for their seeds, for future germination.The leaves are relatively small, ranging from a little over to a little under a foot, and shaped like an elongated football. This gives the plant a somewhat lower yield than, say, Burley, but top grade Virginias can fetch a decent price. 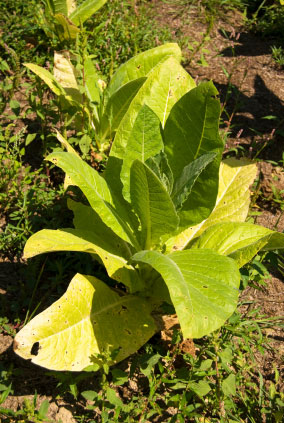 Virginia tobaccos are used in pipe tobacco, cigarettes, shisha (hookah tobacco), chew, snuff and snus. The natural sweetness allows for fewer additives, especially in cigarettes. Under the old British Commonwealth tobacco laws, only liquor could be used to flavor tobacco. Since liquor would probably not be very effective as a casing or topping for cigarettes due to their higher combustion temperature, naturally flavorful tobacco needed to be used. Dunhill, Rothman’s, Craven ‘A’ and DuMaurier made very popular all-Virginia cigarettes, and Canadian brands such as Export ‘A’ (under Commonwealth rules) were flue cured based as well. Sweet Virginias and fragrant Orientals are among the few types of leaf that can be used without much in the way of added flavors, and so have been often used for cigarettes. Less flavorful tobaccos like white Burley and Maryland are used by manufacturers in countries that permit added flavors.

I love working with flue cured tobacco, as it’s a great way of sweetening, mellowing or balancing a blend, and although most Virginias are cased, it doesn’t require a strong casing to mitigate its negative properties, such as excess acidity or sharpness. As I run through a list of some of the great all-time pipe tobaccos, I can’t think of too many examples that don’t contain at least a modicum of Brightleaf.

McClelland is known for their amazing Virginias. Their Christmas Cheer is an annual must-buy for a Brightleaf fan, and their 5100 is the archetype of a red Virginia Cavendish. Many other iconic tobaccos such as Rattray’s Hal O’ The Wynd and Marlin Flake and Lane’s MV-1000 are Virginias.

Call it by whatever name you prefer, Virginia is usually one of the first elements to be considered in putting together a blend, and I enjoy loading a bowl of straight red, red and stoved, or yellow and red from time to time, without adding any other tobaccos. And if it weren’t for the accident of exposing leaves to high, indirect heat, we wouldn’t have Virginia tobaccos today. I guess that not all mistakes are bad.