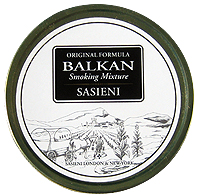 Balkan Sasieni is kind of an almost famous tobacco … sort of. It’s name implies (and many have suggested, and others have disagreed) that it may be a substitute for the long gone, legendary Balkan Sobranie. I can’t tell you if it is, as I never had the opportunity to smoke Balkan Sobranie. Who cares!?! Balkan Sasieni is here and it’s great, and Balkan Sobranie no longer exists. Get over it! There’s tons and tons of awesome tobaccos and Balkan Sasieni should be on every Latakia Lover’s list. There’s no guessing what this tobacco will deliver as soon as you open the tin – Bam! There’s a smoky smoky Latakia tin aroma that immediately dispels any doubt, and makes you confident that this will be an enjoyable smoke. But wait … there’s more to it than that.

At first light, Balkan Sasieni seems like a standard Latakia blend, but as it progresses, the "Balkanness" starts to reveal itself. What does that mean? "Balkan Tobacco" is generally a blend that has Latakia, Oriental and Virginia. If you’ve got some time on your hands start "Googling" Balkan Tobacco Definition and you will find that not everybody agrees on the exact definition, but that is generally it. As Balkan Sasieni progresses, the Latakia starts to make room for the Orientals and Virginias, adding some nice spice and sweetness to make it more interesting than just a straight Latakia blend.

Balkan Sasieni is an interesting blend. It has that nice full flavor and aroma that English smokers will enjoy, and it does impart a subtle tangy floral aftertaste on the tongue. It’s a little bit exotic. I’m imagining myself overlooking the Mediterranean Sea and wondering what other exotic delicacies await as I stroll with my pipe through this crossroads of various cultures. However, Balkan Sasieni’s origins are in London, just like the defunct Sobraine, which is in line with it’s implication as a replacement for such. The tin states, "Original formula Balkan smoking mixture was created in London at the beginning of the century by the master of Tobacco Blenders who first combined the aromatic pleasures of the choicest of Macedonia and Latakia leaf with the richness of Old Virginia to give the pipe smoker an unrivalled smoking pleasure."

I don’t know if it’s unrivalled, but it’s certainly up there with the real good stuff. Balkan Sasieni is something I could be happy smoking any day, any time. This is good, high quality pipe tobacco. If you are strictly an aromatic smoker, then it is definitely not for you. It’s full of pungent, exotic, smoky, tangy, sweet flavors, but doesn’t make the room spin for us lightweights when it comes to nicotine. I’ve read in other reviews that the tobacco was a little too moist out of the tin, but that didn’t happen to me. Goldilocks would have liked it, as it wasn’t too wet, or too dry, it was just right. She probably could have chilled out Papa Bear by offering him some too. I will add Balkan Sasieni to my little club that includes Maltese Falcon, Frog Morton and Samuel Gawith’s Commonwealth. 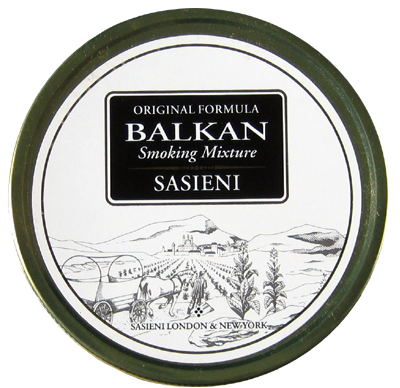 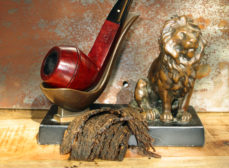 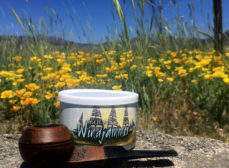