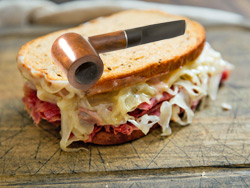 People are always talking about pipe and drink pairings. Claiming certain wines or whiskeys pair better with certain blends of tobaccos. I got to thinking about it this week and decided I really want to know what foods pair best with my favorite tobaccos.

To sort this out, I headed to my favorite rueben place in town (there are a lot of terrible ruebens out there, but a good rueben is glorious) and I sat on the balcony and I packed three pipes. None of those tobaccos really worked very well, and I had to clean the stem of all three pipes to get some of the corned beef out of the bit. So I returned the next day with three different tobaccos.

It’s been 16 days since I started this experience, and I have to say—ruebens just aren’t that good anymore.

I don’t know what I’m doing wrong, but I plan to make headway, and figure out pairings for my favorite Indian foods next.

Until then, let’s move on to your questions for this month 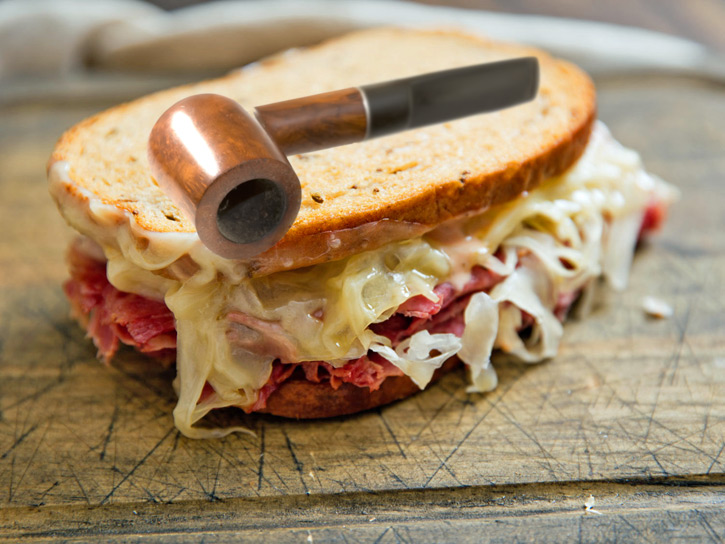 It has long been my life dream to purchase a house with a large raised porch across from an elementary school. I have a big dog that is old and tired but still produces a good bark. My plan is to put a rocking chair out front and yell unintelligible things at kids as they walk home from school. Shaking a cane at them and encouraging the dog to bark. Not in mean way, per se, but in a "grumpy old man" kind of way. Yes, these are the kinds of life goals I have.

My concern is this, when I’m smoking my pipe while yelling at kids, am I giving pipe smokers a bad name?

The Porch Guy in Boise

There is a well-circulated story about a koala bear kept in a zoo in Australia. One time he got sick of being stared at and broke in to the zookeeper’s office. There he stole some cigarettes and a santa-hat and wandered back in to his exhibit where he proceeded to shake his hind-quarters at the onlooking crowds. He then lit up a cigarette and continued smoking while making obscene gestures at the crowd.

Now there was a small group of high-school aged (read: very impressionable) boys with a good conservative upbringing who were looking on at the time. And you might think this would elicit a negative view of koala bears from those boys. But they just stood there and fawned over the koalas.

The point of the story is that no matter how hard that koala tried, you can’t give a koala a bad name. They’re just too awesome. Likewise, you just simply can’t give pipe smokers a bad name. They’re too awesome. Have you seen a picture of me? Apart from my overwhelming (all-consuming) vanity (and envy-inducing cellar the size of a Wal-Mart that I never share with anyone), I’m really a pretty likable person.

So don’t worry about it, light up your pipe. But be aware, it might ruin your scary effect, as the children will just look on the nice old pipe-smoking man with the pleasantly loud voice and wonderful smelling aroma emitting from his porch.

It had better not be the elementary school I live across from, this land is my land,
Hank

While shoveling snow last night I lost my Peterson Dracula x105 in the snow. My question is if I recover it when the ice pack melts is there any hope of being able to smoke it again or is it a total loss? 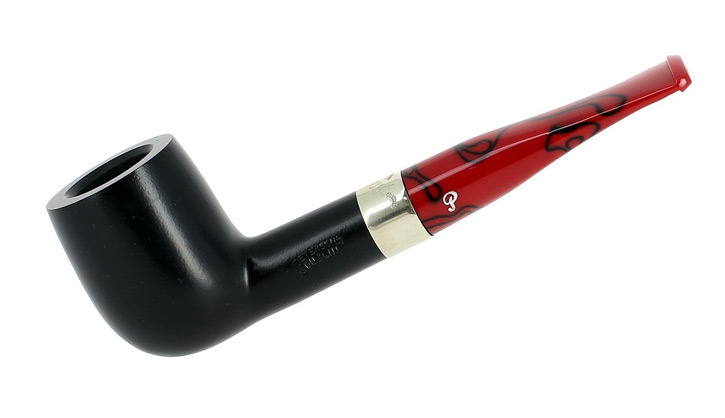 Then I’ll add, that while you might be moving too fast for a shoveling smoker (hence the drop), you don’t need to worry too much. Unless your snow is actually garlic powder, and/or fell on a metal stake (it is a Dracula pipe after all), it’ll probably be just fine.

Okay, I know that’s probably offensive to all the vampires out there, and I’m learning to be more tolerant wherever I can, so let me try that again.

The more appropriate answer is that your pipe is going to be okay. The snow might affect the color of it slightly, but if I understand correctly, your pipe was actually blood red, which…. could use some fading anyhow.

The beauty of this happening to a Peterson pipe (of all the pipes it could happen to) is two things—first, if it’s a system pipe there is an actual part of the pipe specially designed to collect moisture. Now, they intend for this moisture to be the foul dregs of the condensing smoke, but snow will probably be a pleasant surprise for the pipe itself. If a pipe could make snow angels in celebration, it probably would. This pipe isn’t living, but I suppose it could be undead… as I say this out-loud and think about the implications—you should definitely check the area for small pipe-angel shaped snow formations.

Secondly, if it’s a P-Lip pipe (where the air comes out of the top of the stem towards the roof of your mouth rather than directly on to your tongue). Well, let’s just be honest, the P-Lip probably is doing nothing for the pipe. But it’ll still look cool and be something you can brag about to your friends when you finally dig it up.

Just be sure not to salt your driveway.

May your snow pipe always be a cob,
Hank

I was driving across the state last week and was about 300 miles away from home when I reached for my lighter and swerved out of my lane ever so slightly. While off-course I crashed in to a semi-truck and ripped the roof off of my Toyota Camry. Actually it’s sort of a miracle I survived as my car ended up being sucked under the carriage of the trailer and spit out the other side as the back wheels ran over the hood of my car.

The Camry was totaled, which was fine because insurance covered it and I’m able to get a much nicer car with the money. I finally got out of the hospital and made it home two days ago. It was then that I realized I have lost my tin of McClelland Christmas Cheer 1994. It was one of the first years they ever made the blend and a good friend of mine had aged it for twenty years before shipping it off to me. I had only just popped the tin and smoked a bowl or two when the accident happened, and given the state of the vehicle, I’m sure the tin will never be found again.

My question is this: Do you have any McClelland Christmas Cheer 1994 in a cellar somewhere you could send me as a message of solidarity for my loss?

Yours,
Down One Tin in Anchorage.

Dear Down One Tin in Anchorage.

Too bad it didn’t happen to a ’93, would have been happy to share.

Friendly, but only when it happens to suit my interests,
Hank