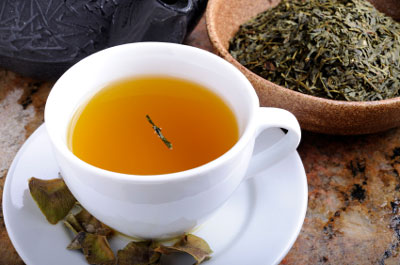 A cup of tea and a pipeful of tobacco are a sublime combination; one that speaks to a contemplative repast, a sense of ritual, and a repudiation of worldly cares. It may not be surprising that tea is the most popular prepared beverage in the world, second only to water in consumption; tobacco is likewise one of the most popular entheogens, or mind-altering substances, currently used by an estimated 1.2 billion worldwide. To chart the historical trajectories of these two plants, however, one is struck by their many intersections and similarities—and by the profound impact they have had on human culture. Because of these unassuming leaves, wars have been waged, nations born and empires toppled, fortunes built and lost, and politics divided on a global scale.

All tea is made from a single species of plant, Camellia sinensis; the different varieties of tea—white, green, oolong, black, and pu-erh—are dependent both upon the region where they are grown and the ways in which the leaves are harvested and processed. For example, an Assam tea is still C. sinensis, though from a cultivar that is indigenous to the northeast Indian state.

Similarly, modern tobacco products are mainly derived from a single plant, Nicotiana tobacum. Although there are several subspecies of tobacco, including N. rustica and N. africana, they are largely uncultivated. Once harvested, the leaves of both plants are subject to various processes of curing, including wilting, bruising, curling, oxidizing, fermenting, heating, steaming, rolling, aging, and several means of drying—some in the sun, some in the shade, some over heated flues or smoky fires. The leaves of both crops are carefully selected and graded, then set aside to age in controlled environments, allowing the aspect of time to work its magic on them.

The net result of all this handling is to control the internal decay of the plant’s cells, to regulate the distribution and combination of water and oxygen, sugars and aromatic oils. The soul of the leaves must be coaxed out through these mechanical and metabolic processes, to be finally released when, paradoxically, either immersed in boiling water or set aflame.

Both plants express their flavors through the natural history of their environments in a term we call terroir, which encompasses the geography, geology and climate in which they are grown. The concept originated with viticulture, and is used with reference to coffee as well. That these crops so clearly denote their origins is another one of the mysteries of the leaves.

Shen Nung, the second Chinese Emperor, purportedly enjoyed the first cup of tea in the year 2737 BC. He was a scholar, skilled in herbal lore and medicine, and insisted that water be boiled to make it potable—roughly forty-six hundred years before Pasteur discovered bacteria. As the legend goes, he was traveling far into the countryside with his retinue and stopped beside a forested stream for their afternoon meal when some leaves from a wild tea tree chanced to fall in the water pot. Noting the pleasant aroma, he drank of the brew, and immediately felt the soothing yet invigorating effects; he declared it a boon from the gods, and thus began tea’s journey. For more than a thousand years, tea slowly infiltrated Chinese culture, at first primarily as a medicinal herb, then as its cultivation and use became more widespread, as a prized beverage and trade commodity. By the first century, when the Silk Road was merely a dirt track, tea was being traded with neighboring India and points south, even being pressed into coinage; by the sixth century it was bartered with the Turks, and had become the universal beverage in its homeland. Except for a brief period following the Mongol conquest of China, when tea drinking was discouraged, tea literally and figuratively dug its roots deep into Asia.

Both Confucius and the Bodhidharma were documented tea drinkers; indeed, the salutary effects of tea on meditation have entwined it with the religious aspect of Eastern cultures to such an extent that myth and ceremony have merged. One such story, often repeated, is that of Bodhidharma on his visit to the Shaolin monks. Refused entry to the temple, he took up residence in a nearby cave and proceeded to stare at the wall in deep meditation. During his seventh year of this wall-gazing, the Bodhidharma fell briefly asleep; angered at his transgression, he sliced his eyelids off to prevent further lapses. As his eyelids fell to the floor, miraculously there sprang up tea plants. Forever after, tea would be used to assist students of Zen to remain awake during their meditations. The Japanese formal tea ceremony is another such expression of chado, the way of tea, as a complex of ritual preparation that serves as Zen practice. Through precisely choreographed motion and specialized accoutrements, one observes the calming of the mind within, the communion of one’s fellow man without, and the encompassing aesthetic of asymmetry, simplicity, and appreciation of natural beauty. To this day, tea culture permeates China, Japan, and all of Southeast Asia, from street-side chaiwallas to formal receptions for heads of state. 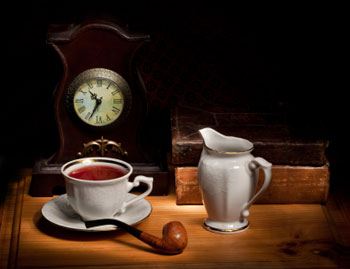 The tobacco plant’s history has been pinpointed to the Pleistocene era—2.5 million years ago, in the Maranon river basin in northeastern Peru. The indigenous people discovered its remarkable properties at some point that can only be described in legend. Henry Schoolcraft’s recollection in his Historical and Statistical Information respecting the Indian Tribes of the United States (Philadelphia, 1851-57) provides one such creation myth: at a time when the Earth was still fair enough for the spirits to take up residence, a very powerful warrior lay beside his fire to sleep. An enemy spirit happened upon him thus, and decided to roll him into the fire. Hair ablaze, the warrior spirit ran screaming through the forest, and wherever the burning hair fell, up from the ground sprang tobacco.

A bit more animated than the discovery of tea, to be sure, though there are several Chinese tea myths that involve dragons and fire. At any rate, by around 1 BC the natives had begun finding ways to enjoy the stimulating effects of tobacco, including smoking it in many forms, chewing, and even hallucination-inducing enemas. The Mayas further developed tobacco’s usage both as a medicinal herb and for its pleasurable properties, and passed it on to the Toltecs and other tribes as far north as the Mississippi River Valley, and it, like tea, became the focus of ceremony and communion with the divine. Many native North American tribes took their tobacco in the form of a pipe, the oldest surviving examples of which date back over four thousand years, at around the same time a certain emperor was discovering tea half a world away.

By the time Columbus reached the Bahamas in 1492, the Arawak Indians had been rolling primitive cigars for generations, as well as inhaling snuff. From the natives’ perspective, this magical substance, which excited the body and the mind, was surely otherworldly; it was transportive for them, and spirits revealed themselves in the curls of smoke. Columbus himself was rather nonplussed by this strange, fragrant plant, even remarking in his journal that the dried leaves they were gifted by the natives were tossed overboard. While in Cuba—searching, incidentally, for the Emperor of China—his companion, Rodrigo de Jerez, was amazed at the way the natives sipped smoke from these "muskets" of rolled leaves, and immediately became a confirmed smoker. Unfortunately for him, this bizarre practice would take some getting used to back in Spain. Frightening his neighbors with the exotic ritual of breathing fire and smoke, Jerez’ new habit led to speculation that he was in league with the Devil, and the Spanish Inquisition summarily locked him up for seven years. Even more lamentably for him, by the time he was released smoking had become quite the popular pastime.

The 16th century was roiling with change in Europe, and it is then that the stories of tea and tobacco converge. In the next installment of this article, we’ll survey a tumultuous 250-year period during which tea and tobacco become the foci of nation building and all-out war. 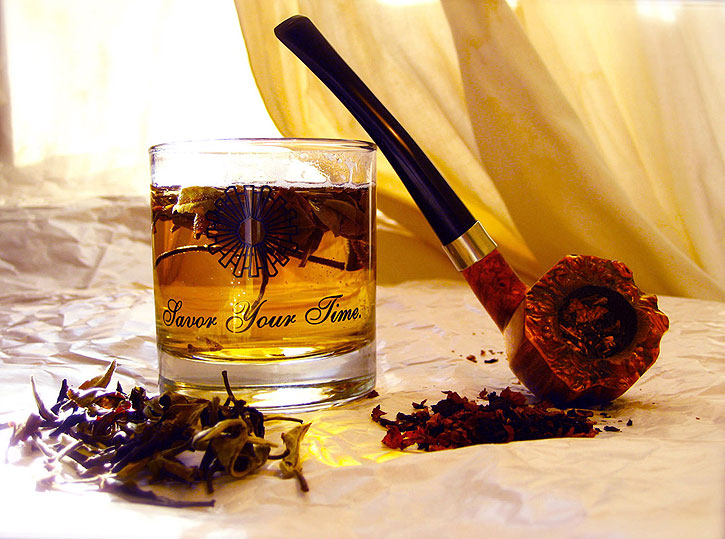 Two Leaves in the Age of Discovery