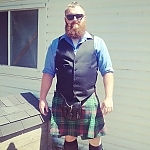 So i was watching THE AVIATOR this weekend and was surprised and jumped for joy to see Alec Baldwin smoking a pipe as the PAN AM President. So it inspired me to make a couple memes. Feel free to take and use. I really enjoyed that movie, Alec Baldwin can play such a good dickhead when asked to. He was awesome in Glengarry Glennross.

" Second place is a set of steak knives"

Al(ick) Baldwin smoking a pipe... It's almost enough to make me give up my hobby!

LoL. Hunter beat me to it. He has been in good movies, but I am repulsed by Alec Baldwin.

Put. That. Coffee. DOWN.

Pipe smokers come in all political and social stripes. Pipe smokers in movies should be looked upon as just a figment of a writer's, producer's, or artist's imagine. Some of members believe that a pipe makes a person better than they probably are. Appearances are deceptive. A pipe, cigar, cigarette simply means to me that the smoker has money to burn and my or may not have an oral fixation . . . possibly a nicotine addiction or . . . maybe they are just a poseur.

Haha guys, these where meant to be funny, not really serious. I just thought Baldwin's faces and gestures would make for good memes.

Al(ick) Baldwin smoking a pipe... It's almost enough to make me give up my hobby!
Click to expand...

Nah... not so much for me, but more for the mere idea that the piece of human excrement Joseph Stalin smoked a pipe.

You don't have to share his political views to find him funny.
I would pretty much pay to watch him reading a phone book.
Some of his lines in The Departed -- and how he delivered them -- are priceless.

You must be a far better parent than I am never to have lost your cool with your kids.
I am not defending his conduct (for which he has apologized), but I sure do understand it.
There but for the grace of God . . .

Nice try. He was a complete lunatic, publicly, to that kid on more than one occasion.
I have lost my cool, who hasn't?
I've never been a psychotic asshole on full blast where the media can pick it up.
Frankly, I'm a little shocked at your blurring of the lines of distiction.
I've raised a teen. It is hard, but it's not ever hard enough to do what HE did.

You undoubtedly must look at the tabloid news more than I do. I am familiar with only one parenting gaffe, and that was a rant that was recorded when he left his daughter a private voicemail where he called his daughter a rude, thoughtless, pig. Someone released (read: ex wife in a divorce battle) leaked that to the tabloids. An example of great parenting? No, but not everyone can be Ghandi.

Peck, I've been through a divorce. I was a single parent from 2007 - 2015. It is all priorities. His talents include... wait for it... acting. He is good at it. At the very least, he should be able to fake the funk for his own flesh and blood.
Saying such a thing to a child is... just insane. She will remember that forever.
I read he did it again, not quite as bad but still bad, after the first episode. That is when the revulsion started.
I just let him go after that. He hadn't been epic funny since his campfire days on SNL, anyway.

He is probably an individual like I am, and spouts off before thinking of the results of his comments.

I'm not one to believe much of what appears in or on the "news." Certainly my opinion of a person is now derived from what appears in print as a "he said, she said' or, "he did, she did" absent substantial evidence. Good evidence not the musings of reporters.

I'll take a pipe smoker in any visual media form (as long as it's really being smoked) whenever I can get it regardless of who the douche bag actor is. I find most of today's Hollywood elite to be complete morons that should stick to acting and leave their personal opinions at home but.....

I have been finding some old classic movies on the tube this year quite regularly that entertain and have honest pipe men in them. It's a genre of film I've never really actively sought out but there just seems to be more "classic" cable channels than ever before. I did enjoy the Aviator though.

Warren, the voicemail was released. It was literally a 'he said'. We all heard it.

I have never heard this stuff about his parenting as I don't pay attention to celebrity happenings. I watch him in movies and have no idea what happens in his personal life. He was great in the Departed and many other movies so that is all I know about the guy. I also have no idea about his politics and don't know if he is a dem or pub and could care less.

Wow... going from a few pictures of Alec Baldwin smoking a pipe in a movie to this. Then again, I admittedly slipped in my disgust for Joseph Stalin and his association with pipe smoking.
Other than that, and going off on a real tangent here as to the OP’s original, and might I add, very innocent post: Alec Baldwin is small potato’s when it comes to reprehensible, unforgivable and disgusting behavior as it pertains to ones private life in the entertainment world.
How would you feel to be constantly under the ‘social media’ microscope with everything you did, and or say even when you considered it to be a private conversation (and rightfully so) on your phone? That’s not to say what Alec said was a disgusting thing to say to his daughter, but it was, supposedly, private and rightfully should have remained so. He obviously seems to have some temper issues and said something on a phone which, when all is said and done, we had absolutely NO right to hear. I’ve never in my life said such things to my daughter, but being human I’ve admittedly lost my temper with her behavior when she was a teen (she is now 43) and perhaps wanted to scream such crazy things at her, but never did. All in all, she turned out to be a great daughter who also provided me with the most lovable granddaughter I could ever wish for.
If you wish to chastise, and or judge anyone in the entertainment world I would personally start with the likes of such degenerate scum as Woody Allen and Roman Polanski and I’ll never again watch any movies that they are associated with in any way shape or form. Alec Baldwin, compared to the likes of them, is Mr. Rogers. Then we also have good old Arnold Schwarzenegger, but I always thought Ahhhh-nold was nothing more than a moron who couldn’t act his way out of the proverbial ‘paper bag’. :wink: