The Second Battle in Seattle 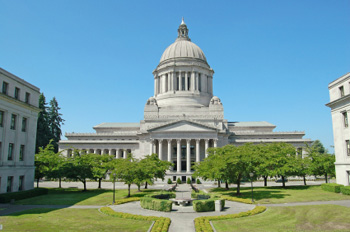 In 1999, thousands swarmed the Washington State Convention and Trade Center in Seattle to protest the World Trade Organization and promote the anti-globalization movement in the United States. Now, nearly twelve years later, a new spark of revolt is sweeping the streets of the Emerald City.
As of last year, a law was passed that made shipping tobacco to consumers in the state of Washington illegal. The ban, which has been lauded by lawmakers, the media, and the public, is a travesty of both free enterprise and free will, and has led multiple proponents of tobacco and all its consumers to take their fight to the halls of the state legislature in protest of the bill and its proposed accessories, HB 1246, (which bans all flavored tobacco) and SB 5016, (which bans smoking in an automobile when minors are present).

As Matt Guss, president of the Seattle Pipe Club put it, “We are not a political organization, but it becomes political when someone wants to take away the right to your pleasure.”
Mr. Guss, who testified in Olympia before the Senate committees who were called to address the issue of exempting pipe tobacco from the restriction of tobacco sales over the Internet last year, said “The agenda is to eliminate tobacco in general from the state of Washington. They won’t say that in public, but they will certainly say that in private.”
And while the ban’s call for the inaccessible storage of tobacco to youth is admirable, Mr. Guss claims that the veil is just another opportunity for the state legislature to hide behind the tired rhetoric of parental concern.
“They always claim that it’s all for the kids, but they just use this excuse to limit adults from enjoying tobacco. It’s a nanny state, and we are in the nanny-ist state in the United States.”
The sales tax on tobacco in Washington is currently 95%, but Mr. Guss has stated that the Attorney General’s office has claimed that they don’t need the taxes, and that the current bills are just a ploy to eliminate tobacco sales in the entire state.
Under the addendum up for consideration on Senate Bill 5016, the constriction that Seattle smokers are currently enduring will become even more uncomfortable.
Under this provision, “It is a traffic infraction for a person to smoke in a car with a person that is under the age of 18 years. Law enforcement may only enforce this law as a secondary infraction, which means that the driver must first be suspected of a violation of another rule of the road or local ordinance.”
MORE READING  Obama Budget Attacks Tobacco ... Again

This bill, if passed, would not only be the first step in eventually illegalizing tobacco in all its forms, but it also opens a door whereby law enforcement may pull over anyone they just see smoking if they can come up with a good enough reason for doing so.

Their tail lights were a little dim.
Their music was a little too loud.
The operator of the vehicle was being detained for possible suspicious activity.
Law enforcement has a nearly limitless amount of excuses in their arsenal, and should this bill (even though it carries at the end a stipulation that says “For the first six months this may only be enforced by law enforcement as a verbal warning”) be passed, it will only be a matter of time before they begin pulling them out just so that they may harass and threaten smokers with legal recourse just for enjoying a substance which is (heads up, Congress, this concerns you) STILL LEGAL.
But it is not the legality, Mr. Guss said, that’s up for debate. It’s the flavoring.
If passed, House Bill 1246 would add the addendum which “Restricts the sale of flavored tobacco products and dissolvable tobacco product.”
On the Mac Baren Tobacco Company’s website, the company states:
“When pipe smoking began to gain wide acceptance in the 1600s, tobacco manufacturers turned to ways of bringing out the best flavour in the tobacco. Essentially this meant emphasizing the best nuances of taste in the raw tobacco for the optimal enjoyment of the smoker. For centuries the tobacco masters have sought to find the perfect casing for a given mixture.”
Mr. Guss contends that this method is being exploited by the state’s legislation to create a smear campaign whereby flavored tobacco could be seen as being marketed toward children.
“They’re making it sound like they’re making chocolate and peppermint-flavored tobacco to entice children, but you don’t have to be a kid to enjoy those things.”

The truly confusing aspect of all this tumult in the Northwest is the fact that, while lawmakers, citizens, and, yes, even the media are vilifying tobacco, they are lauding the “progressive thinking” in opening up medical marijuana dispensaries. 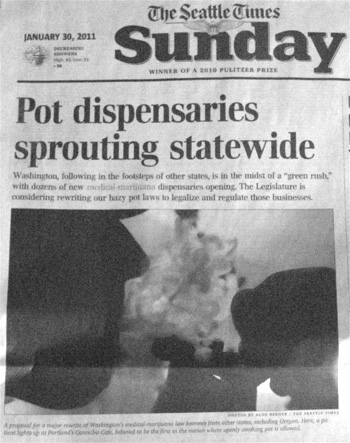 The Seattle Times (which supported the onset of tobacco illegalization with less than the standard objectivity that would designate them as a pinnacle of journalistic integrity) published a front page article on January 30th of this year in which it praised the “innovative pioneers” who were at the forefront of this shift in smoking trends and lauded the ingenuity of the new generation of “potrepreneurs”. [Article here]
This same publication (it must be noted), published an article on smoking over three years ago under the title “Long desired regulation of tobacco is law”. In the article, The Seattle Times urges lawmakers “Do not stop there” and that “Tobacco survives as a lethal and legal substance, but there is no good reason for taxpayers to continue to subsidize its production. Wean this known hazard off federal welfare.”
To contextualize, note that while The Times, an independently-owned and operated paper and thus liable only to itself for the smear campaign it has been and is currently conducting on tobacco, praises the start-up businesses of medicinal marijuana dispensaries, it demands for tobacco to be “weaned off federal welfare.”
Medical marijuana is a federally-welfared substance. Its control and distribution is monitored and operated by the government. Why exactly is Seattle allowing a newspaper to quietly condone the use of an illegal substance (regardless of the fact that its being used for “medicinal purposes”) and lead the charge for banning a legal substance?
Tobacco was used for medicinal purposes for hundreds of years before the smear campaign against its use began. In fifty years, should the roles be reversed and marijuana is legalized, one has to wonder if some new medical study will emerge showing the “harmful bodily effects” of smoking pot and (if it’s still around) whether The Seattle Times may lead another smear campaign within its pages calling for its second illegalization?
Just some food for thought.
The point is, the additional bans that Seattle is pressing for against tobacco is opening a door through which all states (because state legislatures just love to jump on the bandwagon when it comes to the battle with tobacco) will eventually march through amidst a parade of ticker tape and cheering civilians who believe they have finally won the war against the evils of tobacco use.

“They make it sound like anyone who smokes is a villain,” Mr. Guss said. “In my time, smoking a pipe was a symbol of wisdom, thoughtfulness, and caring. It was the age of father-knows-best.”

But the days of Ward Cleaver are far gone, due primarily to the fact, Mr. Guss states, that “the left has been successful in demonizing tobacco. The government today feels free to poke its nose into every aspect of our lives in the name of the greater good.”
In today’s society, paternity has been replaced by the government.
“There’s an old joke,” Mr. Guss said about the issues which face tobacco smokers today,” about how you properly boil a frog. You start with cold water, because then the frog will never know its being boiled until it’s dead.”
The new laws which are up for consideration carry with them a rank of a class C felony for violators, which is punishable by a fine of approximately $5,000. Representatives and proponents of these changes to state law, such as Rep. Eileen Cody, have stated many times that their overall agenda is to “force people to quit smoking.”
“What it boils down to is us against them,” Mr. Guss stated. “And there’s more of them.”
Mr. Guss’s pipe club currently has around two hundred members which meet, in all places, on an Indian reservation.
“If it wasn’t for the Indian Reservation,” Mr. Guss said, “we’d all be in a basement somewhere or driving around in a car waiting to be arrested.”
The Seattle Pipe Club is a collection of individuals who enjoy a common, relaxing hobby which is legally allowed (for the time, anyway) to meet and share in their passion.
“Pipe smoking for us is not a way to get a nicotine fix, but a social activity where we collect pipes, talk about pipes, and smoke different kinds of tobacco,” Mr. Guss said. “And we have to be in a whole separate nation, on a reservation, to do it.”
The personal attacks by state legislation in Washington have just begun. They’ve won many battles already, and the Attorney General’s office has already said that the state no longer requires the tax revenue it gains from the sale of tobacco. The sale of tobacco over the Internet, which eliminated the sales tax altogether, has already brought a heady blow against the current smokers of Washington, and should either of the current bills pass, the rights of smokers will become even more restricted.
“The Attorney General’s office is prepared to eliminate all tobacco from the state of Washington,” Mr. Guss said.
And with the support that it’s gaining in this venture, it seems that it’s only a matter of time before this goal becomes a reality.
Therefore, smokers, pick up your picket signs and protest the misguided attempts by the Washington legislature to control the Puget Sound, because the second Battle in Seattle has already begun, and if they should win, you can bet your matches they’ll be on the warpath and ready to take the traveling crusade to your town next.