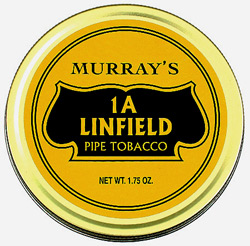 Just when I thought my need for Latakia was winding down, it started to rain. I’m not kidding, either; I’m from the desert, and the weather so far this year has been unreal. Mount Rose, some 40 minutes from Reno, has the distinction from this past winter season of receiving more than 700 inches of snow–which set national records. Ten average-height men sanding on top of each other, and that’s how much snow got dropped. It will be the first year in at least a generation that the snow might not totally melt into the desert valleys during the summer. It’s our water source, and we’re lovin’ it.

What does that have to do with tobacco? If the snow is resilient, the Latakia is proving itself to be as well. With the rain and more balmy temperatures on the way, warmer temperatures push out the snow but there is still a need for warm comforts. One of those comforts came to me in the way of a tin of Murray’s 1A Linfield, brought back from one of my good customers at the shop who knows I’m always ready to try something new, usually something he found in his travels. As a truck driver, “Trucker Rod” as he’s known, braved snow banks many times higher than his truck and chained-up staring snowy-death in the face just to get this to me. Needless to say, I kind of owe him a review.

Murray’s 1A Linfield most likely got its namesake from the once-upon-a-time street address of the Whitehall Tobacco Works in Belfast, which made many a Murray’s product at one point in time (now owned by the British American Tobacco Group, if you must know). The tin is clad in a hum-drum, basic yellow label, a black chef’s toque-looking silhouette with the name stacked within it. Honestly, it’s pretty uninspiring packaging, but does give a nod back to the days when a label basically had two or three colors, a name, and “pipe tobacco” somewhere on it…you know, just so you didn’t forget. As an admirer of tin art, I find this example more quaint than nostalgic, but it serves the purpose. On the reverse, nothing useful other than it mentioning it is made with Virginia, Oriental and Latakia is found. 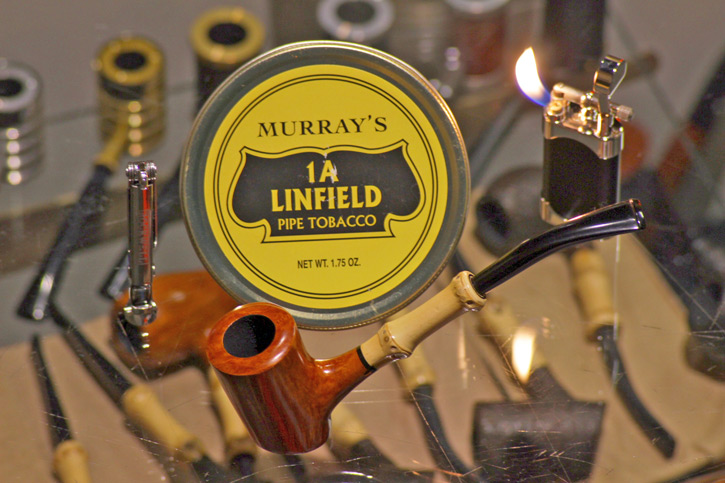 Upon opening, the sharp, spicy and smoky scent of the tobacco is right there to greet you. It’s got a fair amount of Latakia in it, as the kind of Cyprian that Lane/STG uses in their mixtures these days is especially pungent–I have to admit I’m quite a fan of it. The smell sort of reminds me of Nightcap, but yet it doesn’t…it’s much more sour than sweet, and much more peaty than “bacony.” If you’re at all into things like the Dunhill line of tobaccos (which the Murray’s brand handled once upon a time) the cut is typical of these. In fact, having smoked some fairly vintage tins of the Murray’s line of Dunhill tobaccos, I find myself equally charmed with the STG variants, albeit for different reasons. I digress; on to the lighting.

The rain was cats, dogs and jackrabbits when I went out to first try this stuff, and I’m glad, because it was a good way to start. I recently acquired a 1960’s Peterson Donegal Rocky (686? 636? …the stamping is a bit light…) with a fairly wide chamber, and once again, I’m glad, as it was another good way to start. Mind you, Lane/STG has a good number of tobaccos with varying amounts of Latakia, Virginia, and Oriental. So far, I’ve probably tried about a dozen of these tobaccos, and this one sticks out. Granted, someone else might find it to be similar to ____________, but for me, this is a new treat. First tastes of freshly sawn wood, grapefruit, tannins, those crispy bits that smolder after taking a steak off a coal grill…it’s amazingly velvety but lively and present. There’s almost no sweetness to the tobacco at all, but it doesn’t come off as too sour or savory. Like many of this tobacco’s cousins, it smolders effortlessly in a pipe, and smoking slow to nearly a crawl brings about some great sitting time. By the time the middle of the bowl has been reached, most of those lively flavors have mellowed, then the spice of the oriental leafs take center stage. If you like those little prickles on the sides of the tongue as well as the tip, the effervescence is a lot of fun here. Proto-exhale at this point, and the citrus-sours and Latakia really weave in and out. Setting the pipe aside for a few minutes and letting the tobacco rest before re-lighting is a real treat, too. 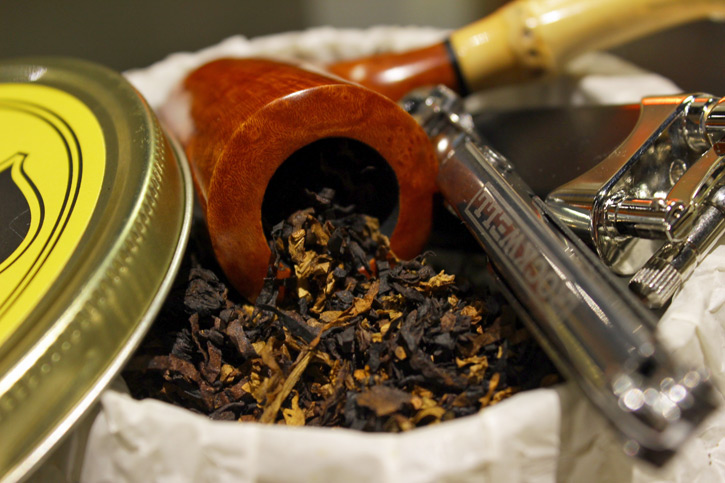 The only downside I found with 1A Linfield was the tendency for the flavors to get a little muddy and dwindle toward the end of the bowl, which was a bit disappointing. As I’ve mentioned many times, one of my favorite parts of smoking a bowl of tobacco is the flavors really coming together at the end, the richness, the intensity…sadly, I kept getting let down with this one. Much like the drippings after cooking a roast being turned into gravy or the “pot liquor” from cookin’ down a pot of collards (which I have plenty of rolls to sop up), the end is not always “the end,” and to me, it really shouldn’t be.

In conclusion, Murray’s 1A Linfield is a damn good tobacco–I paired it with whiskey and coffee, even once with a glass of red wine (a Malbec) and it was very forgiving. The spiciness is pleasant rather than overwhelming, but the Latakia might be a little much for some. Favoring pipes of just about any size, it can be a quick morning smoke or ready for a long sit on the porch. Nicotine is moderate, and it isn’t fussy about over- or under-stoking or tamping. I wish it finished as wonderful as it started, but in a way, that is preferable to a bowl being mostly ho-hum (or terrible!) and then finishing strong: you can always quit while you’re ahead, otherwise!