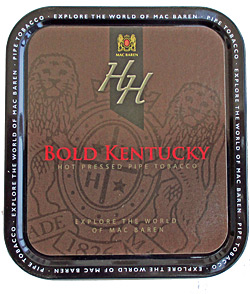 Since I’m the new review writer and this is my first column on PipesMagazine.com, before I begin, I’d like to introduce myself. Some of you might already know me, and for that, you have my apologies and condolences. For those who might not know me, I’m a simple, wordy, pleasure-seeking pipe smoker who works sometimes in the mining/geology field, sometimes as a sous in a commercial kitchen, and I might even be caught red-handed peddling tobacco at a shop in my beloved and unique town of Reno, Nevada.

I’ve been seriously piping for about six years, revisiting my fond lifestyle of somewhat non-seriously smoking a pipe from my teens, which limited me to bulk bags of drugstore tobacco and the cheap pipes that hung blandly next to them. How things have changed!

There’s seemingly endless tobacco and pipe choices out there. We now have the Internet in addition to humble (and sadly disappearing) brick-and-mortar stores. One allows us instant gratification and overwhelming knowledge, while the other gives us hands-on experience, tradition and nostalgia. I believe in the 21st century we’re in a special time as pipe smokers. While some things have changed, others, such as joy, camaraderie and discussion, these have remained very much the same.

If one is new to the pipe, the tobacco world can be overwhelming. For the seasoned smokers, the sunset or unavailability of a certain tobacco of yore can leave one feeling devoid of the familiar, thus needing a new favorite. Daunting as today’s tobacco world may be, our humble leaf should enrich us as pipe smokers. Without it, we’d be missing a large, if not the most important part of our pleasure. Plus, we’d feel like unsatisfied dunces with empty pipes clenched in our jaws.

No matter your tastes, as I’ve learned from those more experienced than I: “Like what you smoke, and smoke what you like.”. These are my subjective takes on the humble leaf, as we all seek to perfect our ideal puffs.

Yesterday was a great day. The shop had a successful cigar event, the cash drawer was on-target, the new guys were on top of it and we left on time. The weather, spring-like balmy; the plant life, growing and budding; traffic, sensible; people, reasonable. I updated a client website, finished my taxes and managed to hang out with my crew at the bar. Once the sun had set, so ended not only a busy day, but a busy week. As the evening progressed, Friday turned out to be an excellent night.

Today, on the other hand, today was not such a good day. In contrast to the day before, I’m a bit hung-over, the clouds have set in a tad and there’s a bite in the yes-it’s-still-winter-you-hopeful-dummy air. I burned my bacon, spilled the orange juice and stubbed my toe, which was a lovely way to distract me from my throbbing skull and churning guts. It’s only 1 PM. I’ve had maybe five hours sleep–my, Friday was an excellent night! It’s too early, yet too late for this crap.

I need something that’s going to chase away the demons of imbibing. Grinding a medium-roasted Guatemalan coffee to throw in the French press is a good start, provided I don’t screw up. Not confident in my multitasking skills, I remembered I had a square tin of some of the new Mac Baren HH “Bold Kentucky” on hand. Word on the street had it Mac Baren had made its strongest tobacco to date. 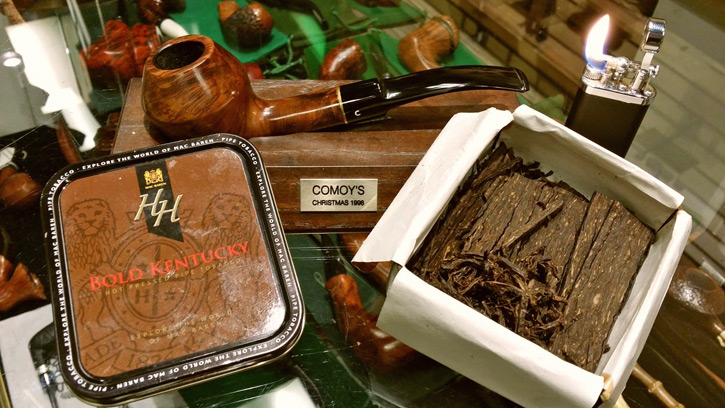 I’m no stranger to higher-octane leafs and flakes, ropes and plugs. It’s not what I always require, because the last thing I need when standing up from a break at work or rushing to the clean up for a night out is chemically induced vertigo and launching my lunch. There are times, however, when that “deep couch/porch sitting” effect of proper Vitamin “N” is just what the doctor ordered, the kind of dosage that makes light-weary eyes focus a bit more, painful foreheads relax just a tad, and calm the shakes from recent debauchery.

The reverse of the tin reads:

“This is the strongest pipe tobacco among the blends in the Mac Baren range and is not recommended for inexperienced pipe smokers. HH Bold Kentucky contains a high amount of the finest Dark fired Kentucky from the USA and Africa and is combined with bright Virginias to soften the taste just a bit. Still the taste is of earthiness and smoke plays the major part just a slight nuance of sweetness as the underlying taste. The origin of the taste is in the leaf itself and thanks to the hot press the different tastes merry [sic] into one unique taste. Like all the other HH blends this blend has only an absolute minimum of casing and no top flavour at all.”

It’s not a Shakespearean sales pitch, but the Danes get the point across. Challenge accepted. Note to self: don’t forget the coffee.

The best thing about strong tobaccos is they always smell sweet in the tin. The raisin-like wafts of prime nicotine truthfulness, and in the case of HH Bold Kentucky, a certain signature of fire-cured tobacco, a spicy smokiness. This tobacco comes in a square, 3.5oz tin, and inside the tobacco is in some of the leatheriest, beef-jerky-like flakes you could imagine. They’ve been pressed something fierce, and for my needs, I had to dry the rubbed-out tobacco a little before I threw them in a cob. Yeah, that’s right, I used a cob. I forewent carefully selecting a vintage English pipe or a pre-Republic Peterson, funky artisan pipe and went with a blue-jeans kind of original. I had no one to impress today but my hangover.

I could only imagine what this tobacco was like before the hot-pressing mellowed it out a little–it must have had quite an edgy and untamed nature at one point. From the tin, if allowed to dry just a tad (it’s quite sticky), it falls apart into pretty even, skinny strands. It’s easy enough to ball up and throw into a pipe. For those that like to just curl a flake into a slug cylinder and have at it, this will challenge you.

The Danes haven’t really overindulged in their tin descriptor here. It’s strong tobacco. It hasn’t a casing or a top flavor. Sure, it’s earthy and slightly sweet. On the front-end of the smoke, especially in the beginning, it almost lends a distant nutmeg and bacon kind of duet going on, which is rather enjoyable. As the bowlful progresses into the middle and finale, tamping requirements are few and burning is even. This is where the “fire cured” aspects really take over. There’s a bit of a barnyard, fermented flavor here, which is something I consider a praiseworthy marker of any tobacco with some brawn. The tail-end of the smoke finishes cleaner than most high-octane, greasy and thick pipe tobacco, which is a plus. The downside overall is there wasn’t a symphony of notes to pick out in individual flavors here–think shredding, rocking guitar solo with a freight train bass line to carry the tune.

With heart fluttering and a slight sweat breaking out, I got what I was looking for in this tobacco today. This is not an all-day smoke for any but the brave, however, burning performance is admirable for this task for those that dare. It isn’t ashy or unruly. 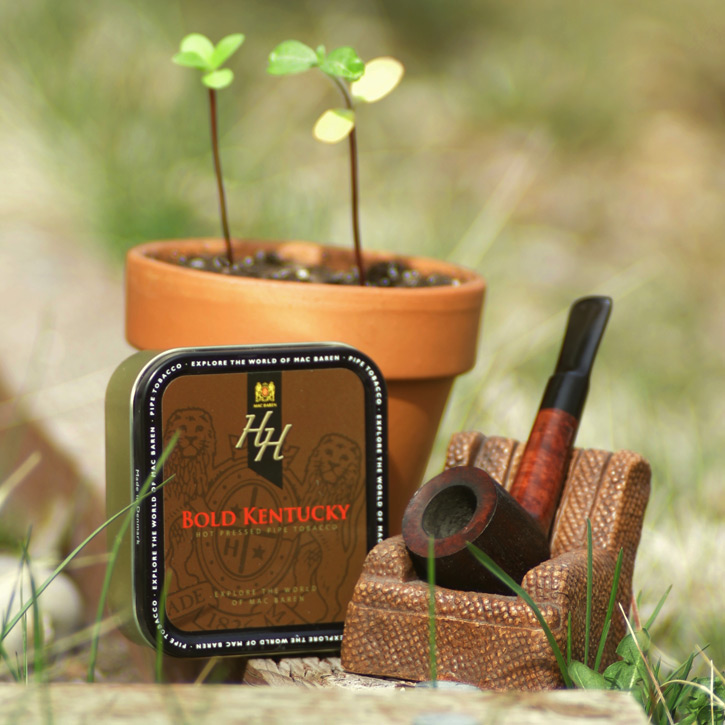 It’s not the strongest tobacco I’ve ever smoked, but it’s up there in the upper ranks. It concerns me that making an ass-kicker was more important than really developing a direction with the flavor other than… well, “bold.” I’ve noticed one of the trends of late has been to make some pretty strong tobaccos, which is nothing new–I think the most recent one might have been the “lat(akia) bombs” that a lot of pipesters were after for a while. Exploring the extremes seems to be a part of our adventurous side these days when looking for something new, or when revisiting something from the past. You know, when men were men, and a bowl of tobacco was a mule-kick to the senses. Something to get your head on straight and clear the fog, and to continue on with the day.

Yeah, if you’re brand-new to the briar, don’t load up on this stuff and puff on it like a fool. If you’re into testing your mettle, by all means it’s a solid entry into the “high octane” stuff. For those looking to pick out every flavor note, or to impress the neighbors with your sweet-smelling aroma of a classic pipe, this might not be for you. If it is for you, though (as a repeating theme here) don’t forget your coffee. It’s a great companion, and no, it doesn’t have to be fancy.

I admit I rather enjoyed the cerebral-numbing feeling and flavor from this tobacco. Mac Baren didn’t go too far here, and they didn’t hold back, either. I could only imagine what this tobacco was like before the hot-pressing mellowed it out a little–it must have been wild. I do wish there was a bit more character beyond just brute force here, but my hat goes off to them. Like many, I’ve had an interesting relationship with Mac Baren, which hasn’t always been fantastic. Their recent offerings joining the ranks they’ve made for years of these stronger, more direct selections such as HH Bold Kentucky and HH Old Dark Fired (Bold Kentucky’s elder but gentler sibling), Mac Baren joins the ranks of making tobacco products aimed at making men out of boys…

…and sober men out of last night’s revelers.