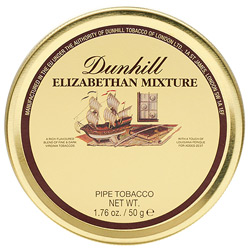 Everywhere I go, I can smell things blooming. Green is the new brown around here, and with a fairly (welcome) wet winter, flowers, grasses, trees, bushes are all getting down to business. From yards to farms to golf courses, from the foothills to the desert canyons, there’s nary a place where the sun shines that isn’t evoking some kind of new growth. Plants are having a no-holds-barred springtime orgy, and it is a beautiful and fantastic experience, right until the time when my eyes, sinuses and nose get in the way. Then I’m not so enthusiastic about the fornicating flora.

This is the time of year when the air is tainted. Perfumes of the season as well as the clouds of histamine-inducing, hideously diabolical pollen (have you ever seen pollen under a microscope?) alerts me to changes in my smoking choices. Latakia is put away, and the Virginias come out to play. Often times that leaves me with few choices, as not all Virginias are created equal. There are quite a number of cures and origins, strains and harvest times to get whatever a blender (or a man’s) ideal. There’s an old saw that pops up now and again in pipe culture, “All roads lead to Virginia.” If that’s confusing for you, I’d like to congratulate you on the purchase/gift of your first pipe. If you are new to non-aromatics, I envy you, because you have a fun and interesting journey ahead. For those tapping the end of their nose, Virginia, be it the leaf or the location, I prefer a visit only during certain times of the year. Plus, I always liked West Virginia much better anyway–it reminds me of Northern Nevada, but smaller, and with more trees. Attitudes and population are otherwise fairly interchangeable, for better or for worse. Back to the subject at hand: I’m a seasonal vagabond when it comes to tobacco.

One of the great things about being a retail tobacconist is I get to try all sorts of things. Cigars, nasal snuff, pipe tobacco, they’re all available to me if not a promotional gift from a company rep, by my store allowance so I can keep up on the newest and best. It’s a keen perk, to be sure. I was recently lamenting my adventurous side getting a little lackluster, finding myself less interested in bouncing from tin to tin and really building relationships with just a handful of tobacco. Truly, both are great approaches and have their enjoyable sides, but to work with tobacco you must be familiar with tobacco. To enjoy tobacco, one need but take time and be satisfied. This time, I found a tin of Dunhill Elizabethan Mixture in the “sample drawer” of the shop. It had been left there fairly recently, and bore a price tag that was not one familiar to me. I suppose a customer had dropped it off after a single bowl and decided it was not for him. We also do not sell this particular Dunhill product in the store, nor had I tried any of it in the past. 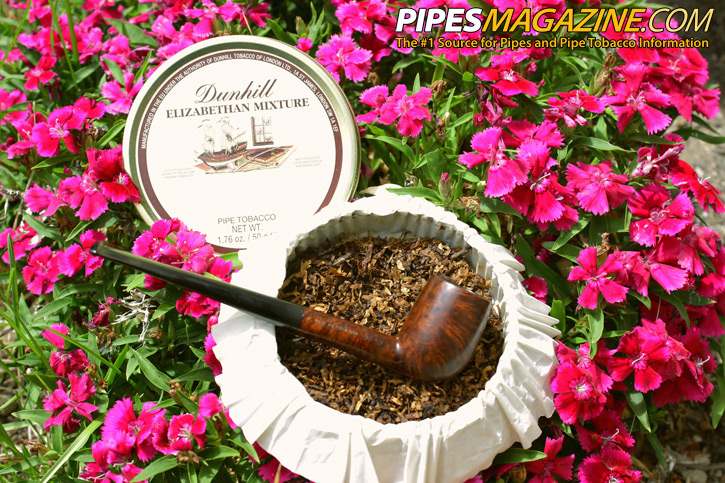 It seemed obvious to me I should have a go at this tobacco. Reading the tin through reddened, itchy eyes: “A rich flavoured blend of fine and dark Virginias with a touch of Louisiana Perique for added zest,” is promised. Along with the sailing vessel model, clay pipe and other accoutrements printed on the tin’s aged-yellow label charmed me, if not made me think, oh dear, the Brits are getting as feisty…like a spring day, quietly touting something…adventurous and zesty…how blush-worthy.

There is something pretty puritanical and stuffy with the tobacco, even in smell and appearance. It doesn’t smell off, or vinegary, or otherworldly sweet. It’s as basic as a tin shoe buckle. The look of it is typical STG/Lane ribbon cut, ala Nightcap or Early Morning pipe, but without any of the Latakia. I’m hesitant as usual of the Perique factor, but it’s getting harder and harder for me to try anything new without Perique. Some of you may know, I really don’t like Perique. It quite often ends up tasting like roofing tar or burning plastic on my palate, especially with overuse of the stuff. In slight amounts, I usually miss the point of it, and in more significant included quantities, I might as well be licking boot bottoms after being propped up for too long next to a fire pit.

I put the Elizabethan Mixture through its paces, giving it a wide range of pipes to be sacrificed within. I smoked it at work, and I smoked it outside amongst the eye-watering and scented clouds of rampant plant sex. I smoked it in a car, I smoked it at a bar. I smoked it, Sam I Am, fearing the taste of tar. Fortunately, my fears of over-Periqueness were unfounded. I’ll cut right to the chase here: it’s a good tobacco, but it’s also a bit of a yawn. Where it really shines, and this has to be a credit to the makers, is it is one of the rare “VaPer” mixtures where I actually got the point of the Perique. It has an honest, pleasant peppery spice on the tongue! This is especially apparent in the first few puffs, and fades a little later on. Proto-exhaling (or “snorking” if you must) gives a nice pep to the senses, something an itchy, allergic nose might find to be satisfying. The added zest isn’t overwhelming, nor is it distracting. Perique-heads will probably not be very impressed, but for anyone wanting to have a little taste of the spicy stuff, this might be for you. As for me, the Virginias are darker red and a bit of an orange rather than truly yellow or “light.” Light Virginias, to me, have a coriander/acidic quality that in the right amount creates a very active and refreshing smoke. The darker Virginias and the more orange-colored stuff in the Elizabethan Mixture have their place, but it’s a muted experience. There’s a bit of carob, pine-resin and brown sugar mellowness in the distance, especially as the bowl gets below the halfway mark. It burned clean, without a tarry presence that darker Virginias can produce, didn’t ghost a clean pipe too much, and performed well under pretty much any condition I chose to light up. Nicotine was light to moderate. Accompaniments of beverage were favorable to unsweetened iced tea, but that was about it. I suppose a basic lager beer or a cold soft drink would work fine, too.

So why was Dunhill Elizabethan Mixture kind of a bore for me? It had a somewhat lively nature to it, but it was a basic liveliness. I’d have to say if it were a libido-awash flower garden, it was more shy morning glories and a few prude, red rose bushes rather than screaming sunflowers, moaning begonias and flirty petunias. It had a delicate nature with a few thorns scratching for naughty, spicy fun– as in, the upkeep is relatively easy, but it isn’t anything over which the neighbors would be particularly envious or offended. 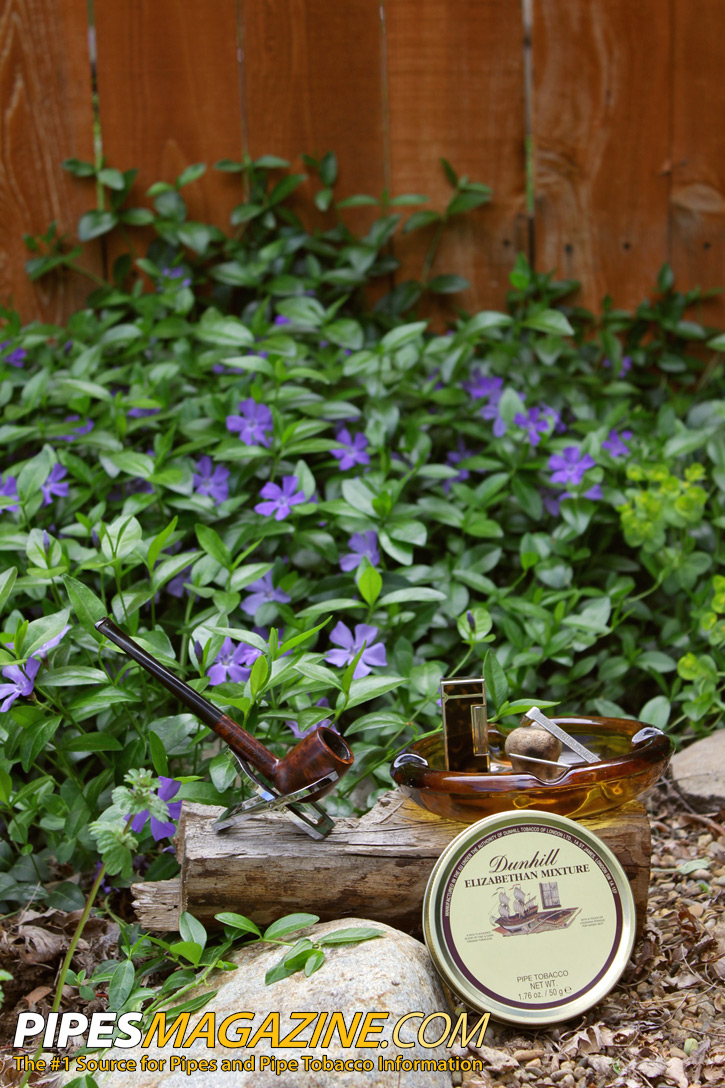 With tissues and eye drops close at hand, this time of year has benefits and drawbacks. Spring isn’t anything compared to fall in my opinion, spring usually being a mess of driven plants and animals gearing up for procreation and easier months to come, marred only by the chaos they tend to create around them. Smoking for those of us with allergies at times can be daunting as a pipe guy, as there’s nothing quite like a sudden sneeze launching ash and burning embers onto the lap, laptop or favorite book. Elizabethan Mixture wasn’t exactly what I was looking for in a tobacco as I search for a good season change companion. It has plusses and minuses, and I think I may finish this tin, pleased I found a great product that showcases the idea of Perique, but I will not be buying it by the pound or tin roll. I require a little more in the way of wow-factor, zest or no zest, and a little more depth.

Like a grouchy, mucosal lover being serenaded by a botanical Barry White, I probably got enough of your love, Elizabethan Mixture. I will spend the next few weeks, my face bathing in Benadryl, Visine and snot, while the plants frolic, the birds chase each other and build nests, and the sun turns gnarled sticks into leafy boughs. There’s enough springtime zest to go around as it is, I’m not sure I need much more.