“Spare me the unsolicited lecture about addiction, I don’t believe a man’s contentment comes from purity—it comes from innocent vices and the reasonable cognitive dissonance about them.”

I’m sharing that line because I spewed it in some haste to someone commenting about my pipe smoking.  The summer around my neck of the sagebrush has been hot, and literally, on fire.  The wildfire smoke from local and regional catastrophes has been awful.  As an outdoor smoker, this left me with fleeting moments to do what I do, and that includes writing about pipe tobacco.  It’s also made it rather difficult to deal with people who, on top of everything else going on, have been edgy and much more bold in their opinions of what everyone else is doing.  When I explained to this particular complainant I’m merely doing my job smoking this evil, briar crucible of terror, I gained a bit of much-needed pleasure by telling them to mind their own damned business in a decent, honest manner.

I’m unapologetic about being a new-school pipe smoker, but I have at least a handful of old-school values that were handed down to me.  I like old-school style tobacco, even if it isn’t the exact tobacco that might have existed decades ago, I can tell the attitude and poise is probably still there.  It’s not usually a whimsical, novelty tobacco, it was meant to develop a long-term relationship.  One in particular that I had the pleasure of exploring for the first time is Drucquer & Sons “Inns of Court.”

The Drucquer & Son’s Inns of Court tin is peachy-yellow with a parchment shadowing, scripted lettering and sadly with a hefty warning label about nicotine obscuring what would normally be an attractive 100g tin.  There’s some history on the label about the Druquer & Sons courtesy of G.L. Pease (with which he himself has history), but I’ll add a little more context:  it all started in London in 1841 and nearly a century later found itself in Berkeley, California in 1928.  To make a long story short, it was a major Bay Area institution for many a smoker for a long time.  Knowing fairly well the spirit of brick and mortar tobacconists, the stories that I found from that time are heartwarming.  Do look them up.  I miss places like this, and they get rarer by the day.  What we do have is their tobacco and mixture recipes, and hopefully, at least a little hint of what it was like to fill up a bowl with something real from people who knew tobacco well.

Inns of Court, like all D&S offerings, come in a 100g tin.  It’s a lot of tobacco to devote yourself to, but for many, it’s worth the investment.  Consisting mainly of Virginia and Burley, Perique and a dash of Latakia round out the mixture in lesser amounts.  The nose that comes off the just-popped tin of tobacco leans fruity and raisin-like, gently oaken in color, loose, and not too moist.  There’s a little hint of a berry vinegar faintly running around in there as well.  Packing my bowls sometimes was a challenge if they had a narrower chamber, as the springy Burley tends to like to make a fool of itself when being lit.  There’s nothing more exciting than a burning lapful of tobacco that decided to play “slinky.”  Please keep this in mind.

The first puffs of Inns of Court are brut-dry and bold.  The mouth-feel on this tobacco is almost astringent and it was helpful to have a drink handy.  Surprised by this as much as I was intrigued, I was immediately graced with a nice spicy, tongue-coating of just the right amount of Perique.  It’s not shy with the Perique, but it’s about as much as I myself like to handle:  piquantly present and not overpowering.  A pine-like wooden attitude holds up the smoke, as well as the faintest, and I mean impressively faint, amount of Latakia to round out the introductory flavor profile.  This tobacco is in no way, shape or form sweet, but the Virginias do add a cracker-crisp and baked quality as well as some slight tartness.  It is as simple as it is forthright.

By the middle of my bowls, I caught what was more of a coffee-like quality once the wood-like nose moved on.  I’m a fan of plain, black coffee, usually a medium-roast, Panamanian if possible.  The notes aren’t bitter, they lean almost herbal.  That’s what I like about Central American coffee.  Nearly all of the beginning flavors I mentioned in this tobacco become built-upon, evolving with each draw that range from coriander to the barest suggestion of cumin.  What Inns of Court provides is a wonderful tobacco purity that isn’t for the faint of heart, but in the spirit of the leaf itself.  I love nothing more than occasionally tasting tobacco in nearly pure form.  It’s nice to enjoy tobacco that hasn’t been mucked around with to the point of losing its identity.  It’s not easy to get used to, but once you understand this, I (or you) may wonder what lengths people actually go to with tobacco these days, be it flavor or varietal.  The result with Inns of Court is, and I’ll say it again, a totally un-sweet tobacco that is filled with savory nuances.

The end of the bowl consistently finishes just as flavorful.  As Inns of Court builds its flavors gradually, it stays fairly consistent no matter which stage you’re smoking.  What starts out spicy and dry, moves on to sophisticated savories, and ends with a nutty, chicken meatiness and relatively surprising velvet mouth-feel.  Burley as a rule in most mixtures tends to stand out early on, but in Inns of Court, it patiently waits until the end.  This suited me just fine.  It’s fascinating to smoke this mixture.  My personal palate gets fatigued by Perique, and I found smaller bowls smoked of this allowed me to finish a portion of Inns of Court to completion more often.  One of the most unique qualties with this mix is when finishing a bowl, I often noticed a fire-roasted tomato quality that popped up: it was just the right taste to dwindle with the last tamps.

I have heard from others who swear by this blend that there’s a chocolate/cocoa attitude floating around, but I didn’t find this.  Admittedly, the wildfire smoke has probably skewed my senses a little, but what I did find in each bowl as I got to know this tobacco was perfectly pleasant.

This is a stiff tobacco with a basic premise, and that’s to deliver leaf in a simple and genuine way.  There’s nothing artificial or suggestive about this tobacco, it’s simply an old-school style smoke.  The lack of flavoring or topping combined with gentle uses of Latakia and Perique suit it.  It’s a really good old-school style smoke.  The room note isn’t going to win any favors from people passing by willing to dig their nose where it doesn’t belong, it burned with no effort and was forgiving to interact with, it paired well with my favorite gin on ice with a slice of orange (a nice sweeter break between puffs), and if smoldered and puffed slowly, it provided a moderate amount of nicotine.

I liked this tobacco, but it wouldn’t be my frequent or first choice.  That’s my problem, not the tobacco’s.  I like spending a little time with the old-school, but I need a few more dynamics long-term.  Smoking Inns of Court day-in and day-out might be just the thing if you want nothing besides just tobacco while you puff.  It doesn’t punch the senses, it has a frank and honest conversation with them.  I don’t think many inexperienced smokers would like this blend, but guys looking for something nostalgic and historic, I think this could satisfy your curiosity.  Who knows, it could be your go-to daily choice of puffing. 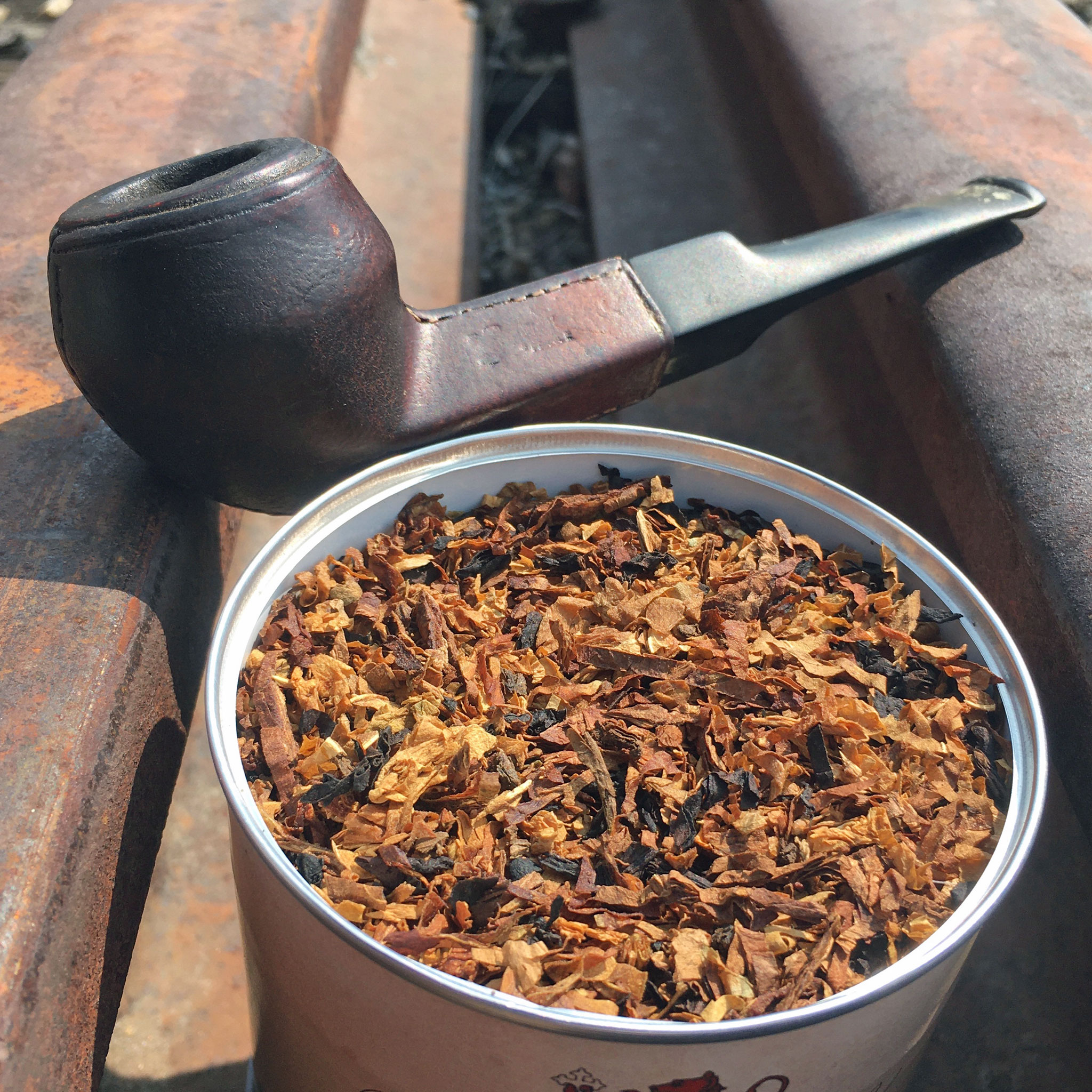 Inns of Court, like all D&S offerings, come in a 100g tin. It’s a lot of tobacco to devote yourself to, but for many, it’s worth the investment.