Show And Tell from the 2014 Chicago Pipe Show 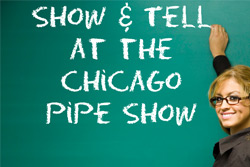 CHICAGO—Well, the 2014 Chicagoland International Pipe & Tobacciana Show is in the history books. There are some left over stories that are just begging to be told. So, here we go:

If you have never been to the show, you owe it to yourself and to your love of pipes and tobacco to put it on the bucket list. You won’t be sorry.

One of the neatest stories at the show was Odalys Gonzales of The Gonzalez Family Cigars. Odalys, 42, is from Cuba and has been in Hialeah, Fla., for about 15 years hand-rolling cigars.

Get this. She learned how to roll cigars as a child watching her grandfather, Lorenzo Gonzalez. The family lived in Pinar del Rio, cigar country in southern Cuba. Lorenzo rolled for the Romeo y Julieta brand, one of the most iconic cigars in the world. Even Sir Winston Churchill was a fan, and had his name forever linked to the cigar with the Churchill size 7×47.

Odalys was busy at her table inside the 6,000-square-foot smoking tent attached to the Mega Center at the Pheasant Run Resort, home of the pipe show, rolling cigars as fast as she could. The cigars, selling for $10 a stick, were flying off the table as well. 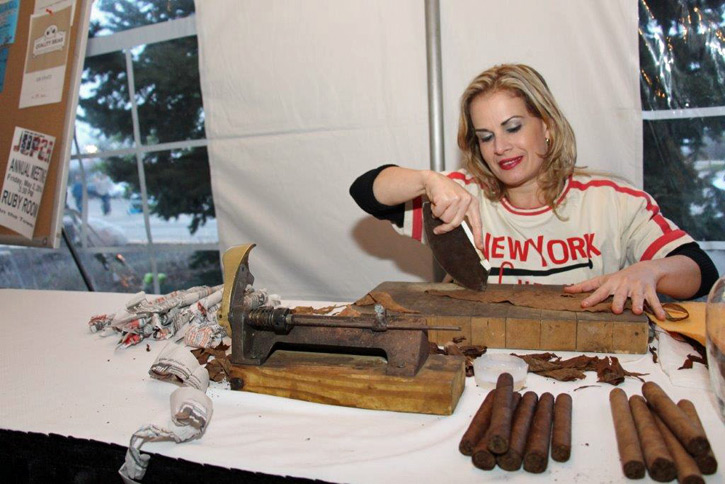 "I have been rolling cigars," she said in a beautiful Cuban tongue roll, "since I was a child sitting in my grandfather’s lap."

The "chabeta" rolled and snipped tobacco leaf expertly, barely making whisking sounds in her hands. The chabeta is the wide blade cigar rollers use to shape the leaf before rolling. It looks like a half moon with a wooden handle. 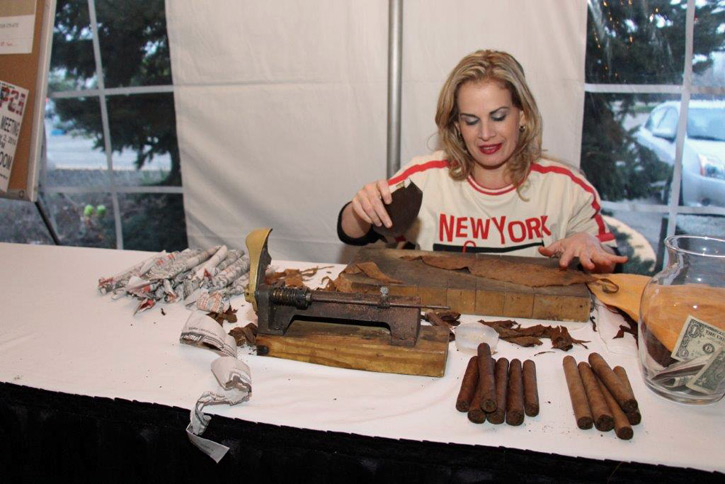 Odalys chabeta was chipped and the wooden handle was slick with wear. "My grandfather gave this to me," she says with a beautiful smile, never missing a roll of the chabeta. 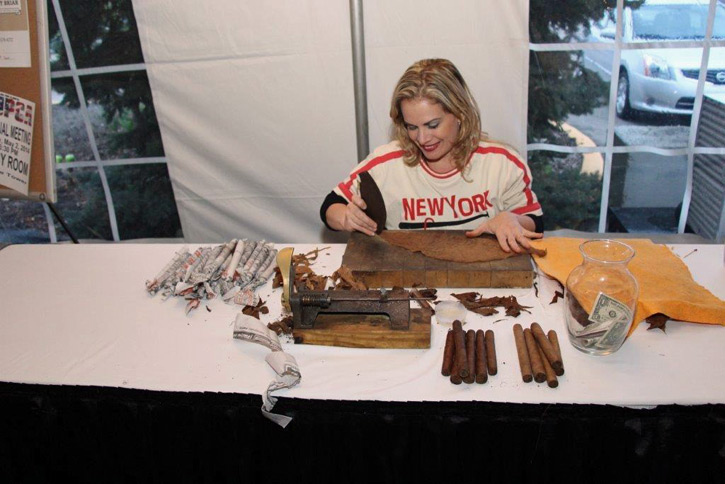 A new pipe line is in the works from Savinelli, one of which is the "piano forte." Brandon S.A. Bellegarde, general manager of Laudisi Distribution Group, mentioned this tidbit while discussing the hot new Kiribi pipe lighter, a dual soft flame for pipes. 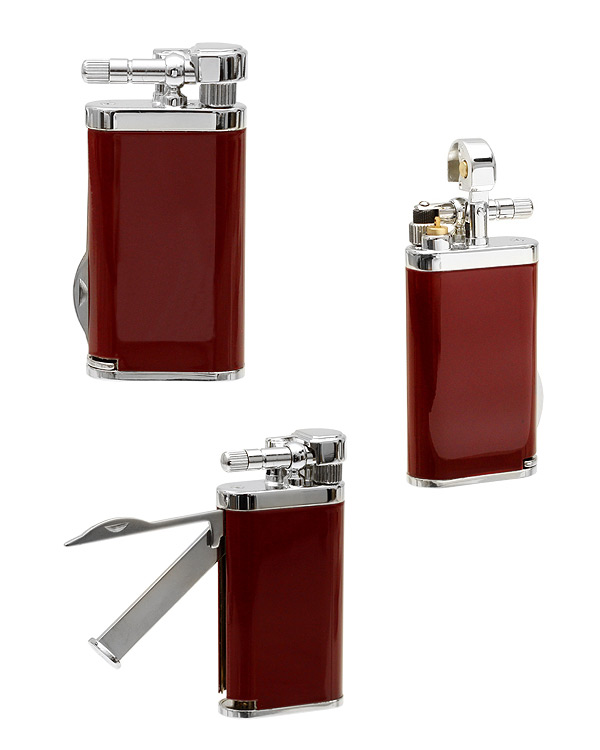 Kiribi, by the way, is from the ancient art of striking agate against quartz to make sparks for good luck. That’s from Brandon, too, who says his personal favorite is the Kabuto shape, which has the Samurai helmet horn look. Neat stuff.

This year, the Chicago Pipe show added a cigar night for the cigar aficionados, which filled the smoking tent to about max. "This is a larger than usual Thursday night for us," said Craig Cobine, show director. "That’s the point of the cigar show, to bring in more people. And, a lot of pipe smokers smoke cigars, so we thought it was time to have some cigars." Cobine says the show has a distinctive philosophy: "We try to bring in change every year. People want the new, but they also rely on what has been."

Chris Karas, 56, of Burton, Mich., was in a familiar role this year. He won the United Pipe Clubs of America slow smoking contest. . . .again. 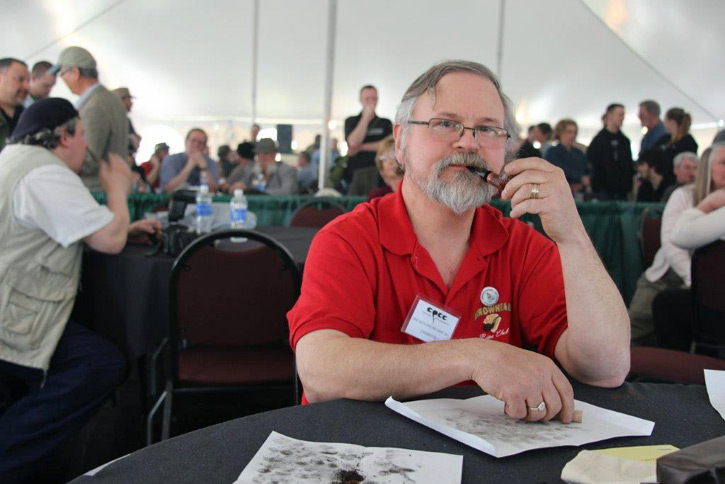 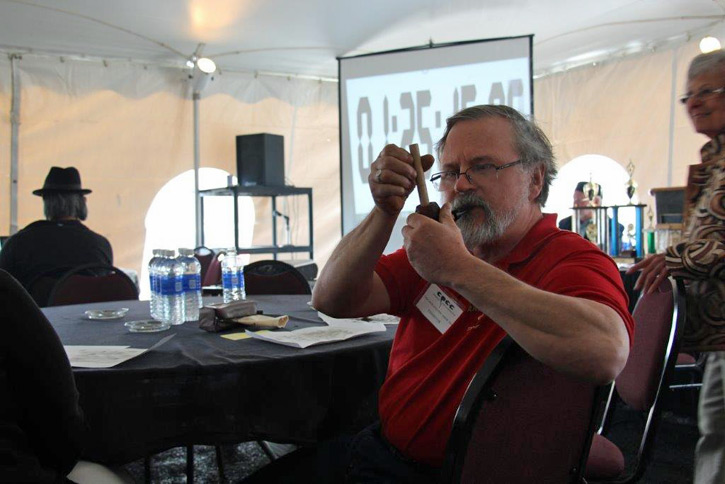 Chris With Time in Background 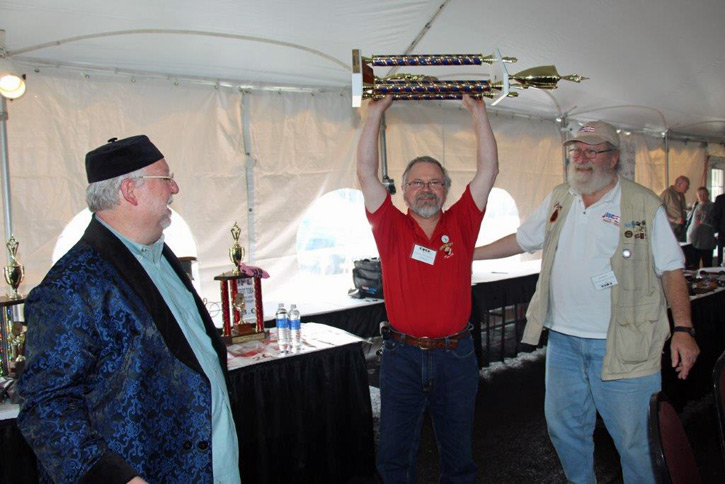 Going into the 12th annual contest this year, he was a two-time winner. He won the male division of the contest with a time of 1:32.52. He battled it out against Alexey Shekhovpsov, 40, of St. Petersburg, Russia, for about 20 minutes as the last two standing, so to speak. The Russian dropped out at 1:24.29. 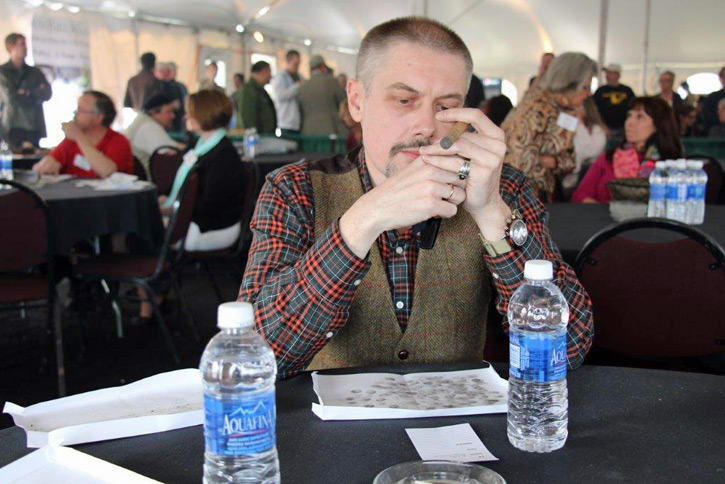 The women’s title was won by Rie Jackobsen of Denmark, who went out around the hour mark just before Shekhovpsov. She was vying to become the first woman to win the contest, but she just missed it. 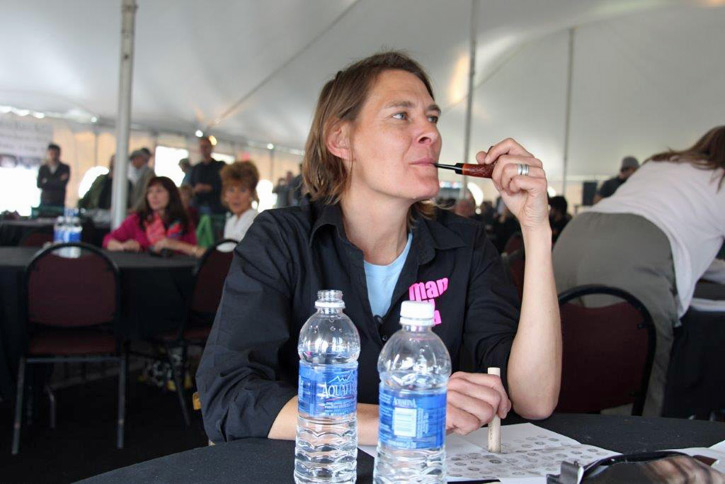 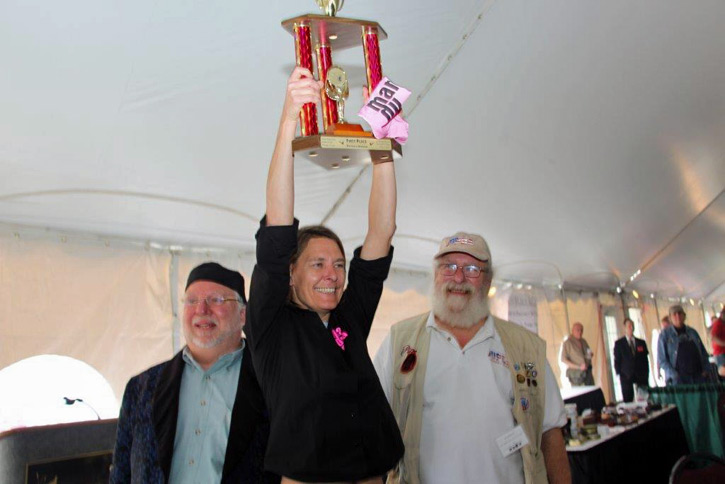 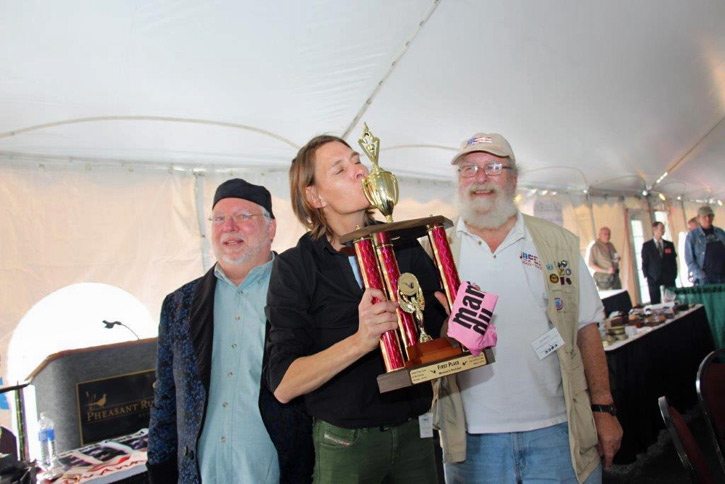 This year’s smoking contest drew 92 contestants, the largest field in the 12 years of the contest history. Last year there were 77 contestants.

One show official said they almost ran out of contest pipes, a nicely designed briar billiard by Claudio Cavicchi of Bologna, Italy, and produced by Luciano of Milan, Italy. 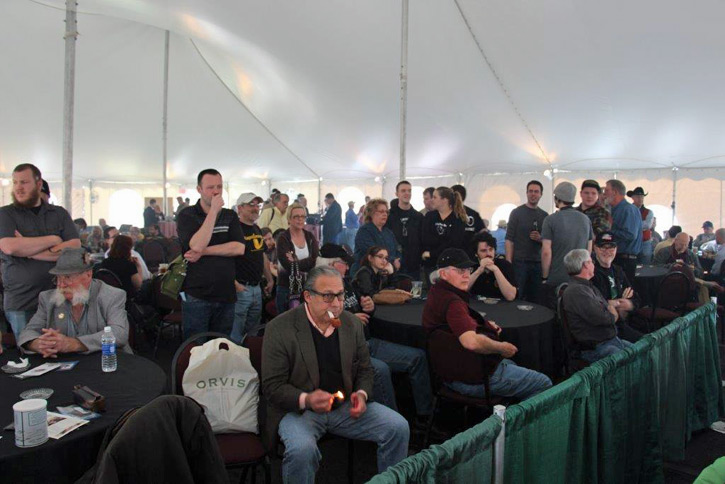 A large crowd watches the pipe smokers in the contest 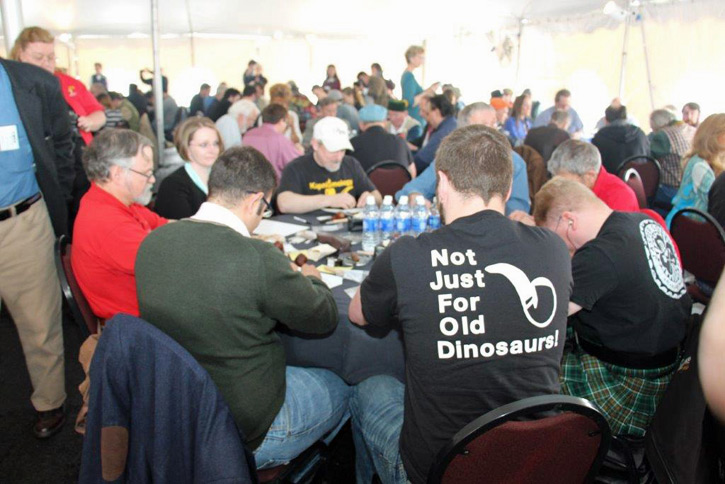 Scott is from Mt. Pleasant, Mich., and is a member of the Order of Collegiate Pipe Smokers.

Here is a PDF with all of the times from the slow smoke contest.

The Chinese were present in a big, big way at this year’s show. I saw one Chinese shopper walking out of the gargantuan Mega Center 35,000-square-foot exhibition center with three or four large shopping bags filled with pipes. It was like Christmas in May.

Li Jun, public relations manager of a Chinese pipe making outfit, whose name I can’t comprehend, told me that "pipe smoking in China is increasing and is now the second or third largest market in the world."

You might guess that about like everything else in the world, the Chinese expect to be first in the market soon.

"We are the largest pipe maker in China," Li Jun told me. "We have seven pipe makers who are very skilled."

There are not so many pipe shops in China, Li Jun, says, but quite a few Chinese-made pipes are on the Internet.

One American pipe enthusiast was overheard to say that "I picked up a Chinese pipe. It was $3,000." He replaced it gently.

The UPCCA presented several awards during the five-day gathering.

Mark Ryan, president of Daughters & Ryan Inc., and the savior of the St. James Parrish perique fields, was noted for his contributions to the tobacco industry.

Chuck and Susie Levi of Chicago’s Iwan Ries & Co. were also presented a UPCCA award for promoting the fellowship of pipe smoking.

And, finally, there is Reggie Stevens, 71, of Birmingham, England.

He is a member of the Chicagoland Pipe Collectors Club and has been coming to the show for a decade.

He is like a dynamo, everywhere at once, helping and escorting or ushering.

Reggie is a singular personality, but that’s not so unusual.

He was born in the midst of the blitz bombing of Birmingham during World War II, and spent his first year on earth in and out of bomb shelters with his family.

And, get this, he smokes his pipes only once a year now. At the Chicagoland International Pipe & Tobacciana Show.

All Photos by Fred Brown

2014 Chicago Pipe Show…What had happened was…