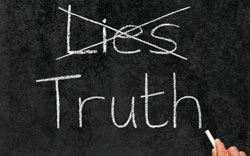 Let’s face it: smoking is not collectively "in vogue" anymore.

Yet the irony of the fact is that the matchslingers of this world, who often find themselves wanting for the support of the American people (and more importantly, the American lawmakers), are the biggest contributors to the American way of life.

How is this possible? you may ask. Certainly they are not contributing to the collective health of the nation, because, let’s face it, the effects of smoking cigarettes are detrimental to one’s health, and the general consensus of the country is that the other tobacco products have adverse effects as well.

But the health issues are beside the point, because, honestly, more money is being funneled into research on how to cure obesity (which is actually pretty ironic that we as a society have to conduct research on how to be less fat) than is being used to fund anti-smoking campaigns or organizations whose mission is to treat people suffering from its more negative effects.

The point of the matter is that the smokers who have to stand out in the cold to light up like a miniature club of social pariahs are the very people who are backing the American dream. 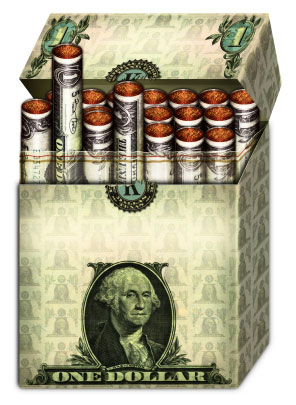 In 1930, the value of the cigarette market (not counting the other tobacco-related luxury items such as cigars, or pipe tobacco), was approximately $113.6 billion spread across the major manufacturers of Lucky Strike, Camel, Chesterfield Regulars, Old Gold Regulars, and Raleigh 85s.

In today’s market, this number is the equivalent of over $1.4 trillion. To put it in more relevant terms, if cigarette manufacturers had continued this market trend (not even accounting for economic growth), within in the next ten to fifteen years, the profits from cigarettes alone would rival our own current national debt.

This, of course, was before the taxation of cigarettes and other tobacco products reached the obscene proportions that they are today.

For example, in recent years, the tax for roll-your-own tobacco was raised from $1.10 per pound to $24.78, illustrating a 2,250% increase in tax revenue for states.

Even now, a new bill proposed by Rep. Steve Cohen [D, TN-9] seeks to increase the tax on pipe tobacco by 775%. This bill (H.R. 4439) is looking "to amend the Internal Revenue Code of 1986 to impose the same rate of tax on pipe tobacco as is imposed on roll-your-own tobacco", and can be expected to move and may even possibly become part of the federal budgeting by the end of fiscal year 2011.

Now, with all these taxes being levied against tobacco products, one can surely expect that by the end of each year, there’s a good chunk of change rattling around in the national piggy bank. This money, as stated by lawmakers and the good folks who run our Congress, is intended to be used for health care purposes and anti-smoking campaigns in our sinking economy. Indeed, ever since the Master Settlement Agreement of 1998 and the $246 billion that was paid to both public and private claimants, the funding of these programs has been the primary reason behind the state and federal government taxing the crap out of tobacco manufacturers.

But, as is often seen when it comes to the dealings of the state and federal governments, only a meager amount of this revenue is actually being spent on what it’s supposed to be being spent on.

For example, Massachusetts lawmakers dedicated only $4.5 million to anti-smoking programs in 2008. And while this may seem a generous allowance for these programs, if taken within the context of the $4.3 billion that the tobacco taxes brought in that year, the previously generous allowance shrinks to a mere pittance.

Which is exactly what state and federal funding for anti-smoking campaigns is: a pittance. It is an illusion, a necessary expenditure to keep the activism against smoking alive so that lawmakers can retain their popularity and continue to draft these ridiculous bills that will target only one of the many negative health aspects prevalent in today’s American culture. The small allowance given to anti-smoking research is merely the price they must pay to continue this charade, and they make sure that this allowance is as small as possible to make sure that these campaigns are not as effective as they could be, because if these campaigns were actually allowed to be effective, lawmakers would lose one of their primary sources of revenue.

In the economic recession that has been plaguing the country for over the last two years, tobacco has become a godsend for state and federal funding, and the good patrons who enjoy its products the apostles whose message is rejected as they are spit on and demonized while simultaneously aiding in the effort to keep the American economy afloat.

Think about it: would President Obama have gained much ground in his battle to reform health care without the revenue from tobacco taxes? Probably not. 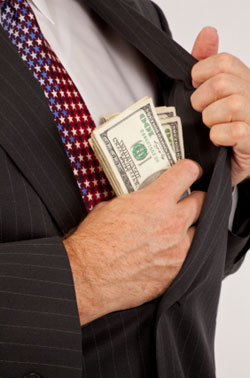 But the current health care issues and its ties to tobacco is not the first time that the two have tangoed to the bitter tune of The O’Jays’ "For The Love of Money".

In October of 1952, writer Roy Norr published an article in The Christian Herald entitled "Cancer by the Carton" which would eventually act as a matchmaker for the two parties. This article, which was republished by Reader’s Digest in December of that year, would help galvanize the American public and give rise to the belief in the negative effects of smoking.

This article, though, was really only the necessary catalyst for preconceived plans to be put in effect. In 1945, President Harry S. Truman endorsed a bill entitled the Murray-Wagner-Dingell bill in an attempt to enact compulsory health insurance on the American people. While this particular bill was shot down in Congress, the drafters of this particular bill reconvened shortly afterwards to draft a new bill which would become the precursor of contemporary Medicare and Medicaid.

In 1947, researchers Evarts Ambrose Graham and Ernst Wynder began research, with funding from the newly-coined American Cancer Society, on the smoking behavior of 146 lung cancer patients in New York City. The society, which originally operated under the name American Society for the Control of Cancer, adopted the new name in 1945. The findings of Graham and Wynder went on to become a cornerstone for the argument against smoking.

And in 1952, shortly before Norr’s infamous article was published, Albert Lasker of the newly-formed Lasker foundation died of cancer, galvanizing his wife, Mary, to embark on an unheard-of campaign to garner federal financing of medical research. In the past, financing of independent and scholastically-scientific research (such as the research which was conducted at the behest of the Lasker Foundation) was primarily found through independent and philanthropic means, but because of the findings of Graham and Wynder, the influence of the American Cancer Society (which had by this time allied itself with the Lasker Foundation), and the knowledge of President Truman’s desire for universal health insurance, the Lasker Foundation became one of the first foundations in American history to receive federal financing for its research.

And while the average American may not be familiar with the Lasker Foundation, the American Cancer Society has certainly become one of the primary symbols against tobacco use, achieving the status of "champion of the people", "crusader against wrong-doing", and "the good guys".

So while the ACS and other non-profit organizations dedicated to the eradication of smoking and the enjoyment of all tobacco products may be the "good guys", it is apparent from the numbers that their lofty ideals do not have the full support or necessary funding to see their dreams realized.

Which is the real point of tobacco taxes. Lawmakers claim that these taxes are being levied against tobacco in order to cover the health care expenses for individuals suffering from the effects of smoking and to support organizations with mission statements leaning toward anti-smoking trends, but this is not the real truth.

The real truth lies in the money, because numbers (unlike politicians) don’t lie. And the numbers show that not even 10% of the tax revenue from tobacco goes toward the reasons for enacting a tobacco tax in the first place. 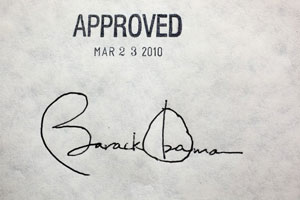 And one of the primary reasons for increasing the tobacco tax even more in the last two years has been President Obama’s push for health care reform, pitting him as a crusader to rival the previous aspirations of President Truman. In both cases, tobacco has suffered from the lofty ideals of an American president, and in both cases, studies were published suggesting the negative effects of smoking.

But, in reality, the effects of smoking are irrelevant; the reasons behind the push is because both Presidents and their advisors understand that fear-mongering leads to higher support and thus the ability to create higher taxes for the focus of their vendetta, which, in both cases, was namely tobacco.

Creating a myth within the American public that their health is in jeopardy is the simplest way to get the money of the American people, but more importantly their support because with the support of the masses, both state and federal governments can get their hands on that juicy tobacco cheese. 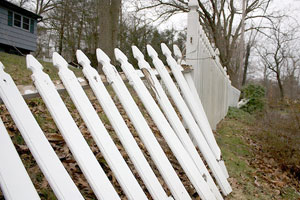 In the end, it is apparent though that the health of the nation is not the primary concern of the government, because, if it was, then there would be more than 10% going toward the American Cancer Society. If it was, then anti-smoking campaigns would be effective and I wouldn’t have the urge to light up right now. And if it was, what with the nearly unlimited access to the world’s top scientists that $16 billion a year affords, then we probably would have found a cure for cancer by now and it really wouldn’t matter if anybody smoked anymore.

Which leads to the biggest question of all when faced with these revelations: exactly where is all this money going?

The American dream (or at least the idealized version) is the husband and wife combo, two-point-five kids, a white picket fence, and the freedom that unlimited funds affords you. If the money from taxing tobacco is not going toward health care and research, then it must be considered that it is going toward funding someone’s American dream.

So, Mr. Congressman, Mr. President, and whoever else is benefiting financially from the taxes of my tobacco habit, have a Mai Tai on me as I pour myself a glass of dissatisfaction and we’ll toast to the continuation of good old government greed, a tradition as old as tobacco itself.