Have you ever had this thought cross your mind: your tobacco cellar, chock full of all those terrific blends from yesteryear, are likely to outlive you!

Just the other day, when I was taking stock of the elder cellar, of which I pride myself upon, a light dawned.

Ladies and germs, uh, gentlemen, this tobacco cellar is broad, deep, and comprehensive.

Bring on the tobaccoalypse, I said. My cellar can weather the storm and keep on sailing.

Back in the 1980s, I commenced with this maxim: Buy one tin to smoke, one to the cellar.

That worked well for many, many years. Now, let’s fast-forward to the 2000s.

When the feds began sword rattling about wiping out tobacco blends as we know them, my cellaring habit became severe.

TAD was in its infancy.

Still later, there was a leap of faith by your erstwhile Pundit: Buying by the bulk.

And even later, bulk by the jar wasn’t good enough. I purchased significant bags of tobacco bulk and tins throughout the mid-2000s.

Then sometime around 2012-2014, I began to agonize about getting caught in the fed’s prohibition mindset.

Instead of PAD, my instincts turned to gluttonous TAD, or what you might define as TAD Gone Wild. Pipe purchases were postponed while cellaring intensified.

Of course, my family thought I had lost my mind and all sense of responsibility.

What, are you spending the children’s inheritance, they asked?

Ahh, I refused to answer that question on the grounds it might incriminate me.

Ok, so I wasn’t spending the kids’ happy days after dad is through with his days.

A few months ago, I began to look upon my handiwork.

Not bad, not bad. But then going deeper into the heart of my cellar, a dark feeling developed.

“Why,” I said to myself, “you have built a mountain of tobacco. Will you be around to smoke the mountain down to a molehill?”

Tins, jars, sacks, you name it, Tobacco Mountain is impressive, if I say so.

Some friends who have been to the tobacco mountaintop have a similar troubling question: Do you think you will live long enough now to smoke all those tins, jars, and sacks of tobacco?

Longevity has always been a Houdini trick. You do your best with the birthday continuum, and then suddenly, people begin asking where you are!

One day as I perused my handiwork, a bit of light lit my shrinking brain: some of the stockpiled blends, purchased in the Dark Ages, and now residing in Tobacco Mountain are fetching rather amazing prices in some sectors.

I made the mistake of sharing that information with a son-in-law recently.

He sounded an ignoble howl: “Why not sell half that mountain and some of your pipes?

“You could take a couple of cruises since you probably won’t live long enough anyway to smoke all that in one of those many pipes you have.”

I had to remind him, in vintage Samuel Langhorne Clemens, “The report of my death was an exaggeration.”

In my case, I hope it is premature. I’d hate to leave Tobacco Mountain to the whims of my relatives.

The mountain and prized pipe collection, the entire entourage of memories, would be sold to the highest bidder.

So, to the central question, will my cellar outlive me?

No doubt about it.

But here is the clincher, I’m taking it all with me.

Now for some Pipe Pundit Ephemeris:

First, let me say upfront here that I was and still am a fan of the old Pipe Smoker’s Ephemeris by Tom Dunn.

I collected a few publications before it discontinued. That was a sad, sad loss to the pipe-smoking community and has not been achieved since, in my estimation.

So, to be clear, the Pundit Ephemeris is in no way comparable or even close to the Pipe Smoker’s Ephemeris by the late Tom Dunn.

So, with these acknowledgments firmly set, let’s see the beginning of what the Pipe Pundit hopes to pull off in future Pipe Pundit Ephemeral:

The other day while visiting a local B&M, a fellow pipe-smoker halloed me. He wanted to give me a gift he said he found in a drawer. He thought the brochure must be at least 30 years old or more.

Inside are a host of ideas for creating art forms with various pipe cleaner colors: purple, red, green, blue, etc.

I attempted to find the creator of the pamphlet online but can only provide the address on the back of the brochure: Chenille-Kraft Pipe Cleaner Art Instruction Book, price $1, Barry Products Co., Chicago, Ill., 60657.

If anyone knows more, PM me at Tennsmoker/PipesMagazine.com

And now, one other new feature for 2020 from the Old Ball Coach. No, sorry. That’s another story.

This new year has brought refreshing reflections about fresh (to the Pundit) tobacco blends:

Under normal conditions, the Pundit does not, repeat, does not do tobacco reviews.

And that is because a Pundit review is like shooting billiards with a broom handle or tossing basketball hoops with a watermelon.

The Pundit’s usual review is dull, like or don’t like. That’s it. The don’t likes are given away. The likes stay until they reach the don’t like level. 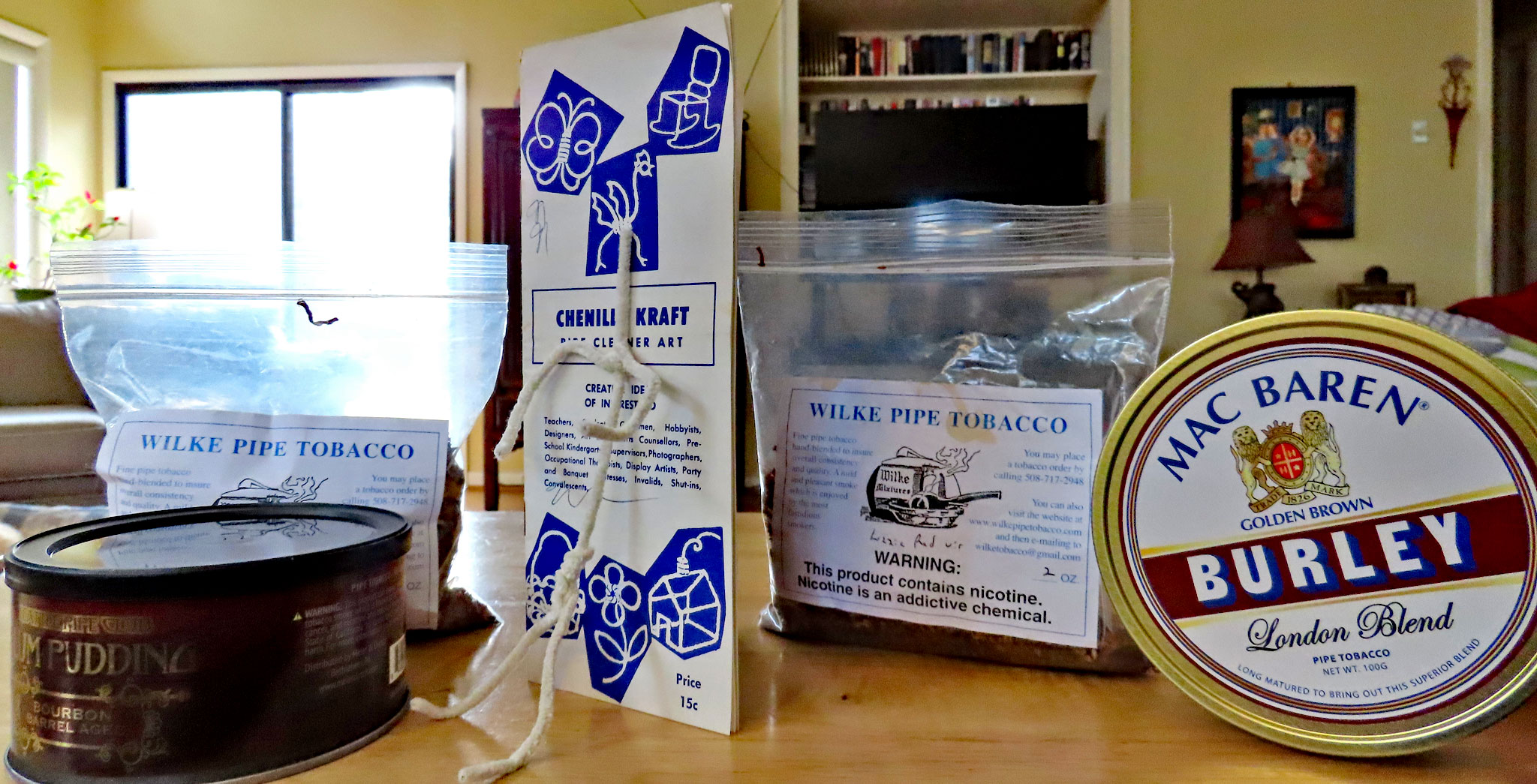 Of the four, SPC’s Plum Pudding aged in a bourbon barrel, is another winner from Joe Lankford, virtuoso blender if ever there was one.

Oh, yes, the chunk of bourbon barrel inside the tin is a very nice touch. If only it had been from a Tennessee whiskey-sipping Jack Daniel’s barrel!

The Pundit found Plum Pudding Bourbon Barrel Aged a thrill. Needs some drying time, but overall not too strong, not too weak, just right. The tin aroma is straight from Bourbon Street. This blend is sweet and smooth on the palate and now resides in the Pundit like column.

Mac Baren Burley London Blend, a short-run redo of a classic from the 1960s, falls into the same column as well.

The burley is excellent, the Virginias add some depth, and the cocoa is chocolatey.

Puff with respect and the rewards result in delight.

The two Wilke Blends, one an old favorite from Wilke and the other a new blend by new owner John Brandt, are genuinely outstanding.

Wilke No. 13, aka Magic 13, is a magical blend of Tennessee Burley, Latakia, Perique, Virginia, and Royal Scot mixture.

Former Wilke owner Carol Burns brought this blend back from the dustbin of history, and it is just a winner if you like light to moderate English blends.

Magic 13 does not rake the palate with tongue bite and advances to the Pundit like column in spades. Leaves some moisture in the bowl.

John Brandt’s Lizzie Blood Virginia is a Virginia/perique with an orange topping.

The Lizzie may be an acquired taste, however. The topping is present, and the nic-hit is not shocking, but it makes its presence known in the last third of the bowl. Some moisture.

Both Wilke blends made the Pundit’s likable list, and will be invited back.

So, give ‘em all a try and let the Old Ball, er, Pundit hear your thoughts.

So, in the immortal words of Jackie Gleason in the 1963 film, “Soldier in the Rain,” the Pundit says, “Until that time, Eustis, until that time.” 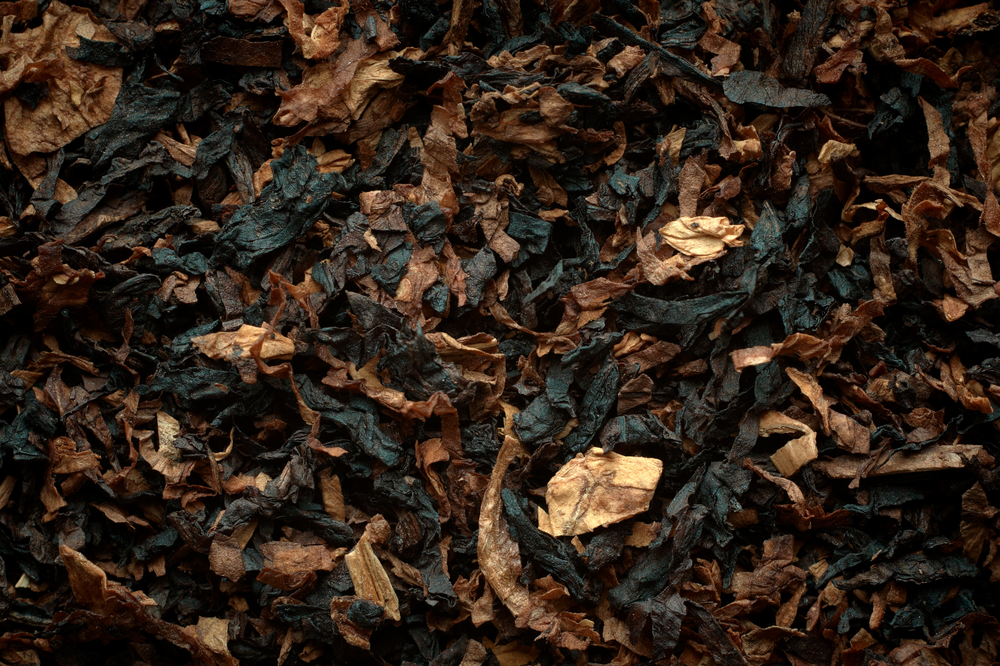