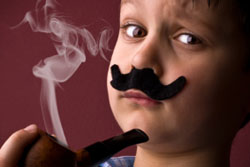 The 2011 National Youth Tobacco Survey (NYTS) data were recently made public by the Centers for Disease Control. The NYTS is a nationally representative sample of students grades 6 through 12. The survey yielded a total sample size of 18,866.

The survey asks two questions about pipe smoking. The first is: "Have you ever tried smoking tobacco in a pipe, even one or two puffs?" Of the 18,595 that answered the question, 7.9% responded yes to it. Now this is a pretty broad measure capturing anyone just taking a puff from dad’s pipe even once years ago to regular users of pipes. 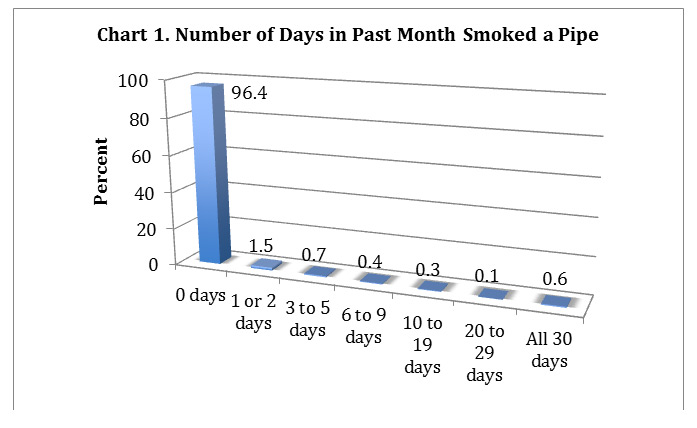 As might be expected, pipe smoking increases with age, as shown in Chart 2. The "Ever" column takes into account the total sample with complete cases of 18,439 while the "Everyday" column only takes into account the 104 young people who reported smoking a pipe all 30. Not surprisingly, as people get older, the more likely they are to take a few puffs of a pipe. However, those smoking everyday shows the problem of small sample sizes. This can be seen with the 1.4% of those under the age of 12 reporting smoking daily, clearly bucking the trend of pipe smoking prevalence and age. If we ignore this age category, the remaining ages show the same kind of trend as with ever smoking. The older you are, the more likely you are to not only try a pipe, but smoke a pipe regularly.

MORE READING  The Development of a New Blend 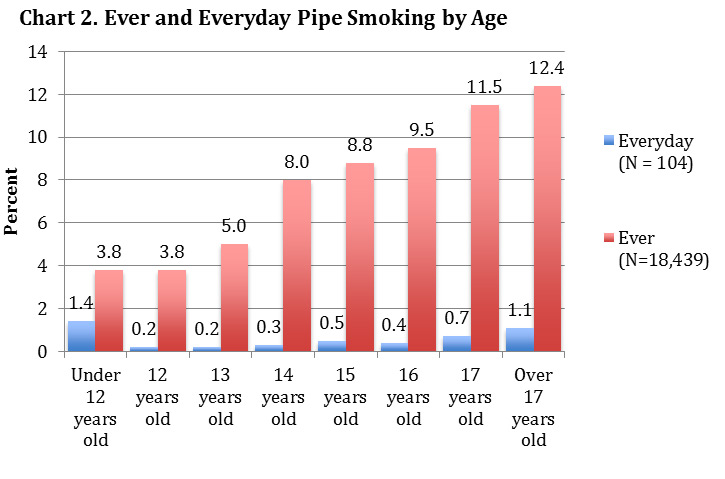 Finally a more sophisticated analysis was done with ever smoking. Using a statistical technique called binary logistic regression we are able to estimate factors that affect whether a young person will at least try and smoke a pipe. For example, for each year older young people are, there is an 18% increase in the likelihood they will try a pipe.

Using other questions found in the survey I find some interesting relationships. One question asks: "During the past 30 days, how much money did you have each week to spend any way you wanted" with seven response categories ranging from none to more than $50. For each increase in the amount of money young people have, they are on average 13% more likely to try a pipe. So someone with $50 to blow is almost twice as likely than someone with no money to try a pipe.

Another question asks if any one else who now lives with the respondent smokes a pipe. Those who answered "yes" to this question were six times more likely to try a pipe than those who said "no." Clearly knowing someone who smokes a pipe, who is probably older, has a major effect on trying a pipe.

Another attitudinal item was whether young people thought that "breathing smoke from other people’s cigarettes or other tobacco products is" (1) not harmful at all to one’s health to (4) very harmful to one’s health. As might be expected, the more harm respondents see in second-hand smoke, the less likely they are to try a pipe. As we move from 1 to 2, 2 to 3 and so on up the scale, we are 26% less likely to try a pipe.

If pipe smoking is increasing among young adults, where does this trend start? Some of it begins even before a young person graduates from high school. We would expect that pipe smoking, like other risky behaviors, would blossom during the college years. At the same time, certain beliefs and attitudes, particularly those in response to anti-smoking messages, have an effect on whether a person is going to try, even once, a pipe. These messages are strong. For example, 70% of the respondents thought that second-hand smoke was very harmful and another 22% thought it was somewhat harmful. So only 8% were critical of the second-hand smoke issue.

Further, smoking is not viewed as something cool any more, if it ever was. Almost 90% of young people disagreed that cigarettes make a person look cool and fit in. Likewise, over two-thirds believed that cigarette smoking did not increase the number of friends a person had.

As negative attitudes and beliefs fostered by anti-smoking propaganda increases, barriers to trying a pipe should also increase. It’s not clear what happens to these attitudes and beliefs once a person enters college. But it appears that it is going to be an uphill battle. As a result, we will need more positive messages about pipe smoking in particular if the lifestyle choice is going to continue unencumbered by government agencies. We will need more Gandalf’s and more Juno’s on screen smoking pipes. We will need the current increasing number of college students, who have decided the pleasures of pipe smoking outweigh the hyperbolized claims of the anti-smoking lobby, to provide positive role models to future cohorts of college students and to provide them with opportunities to try a pipe. Finally we need to get around this zero-tolerance approach to the dangers of tobacco and to some saner tobacco policies that perhaps take a harm reduction approach to tobacco use so that pipe and cigar smoking, due to the lack of inhalation, is a safer form of tobacco use than cigarette smoking.

Another article by Doc Garr is: "The Ritual of Smoking a Pipe"