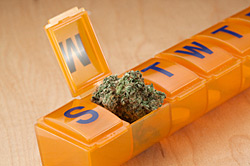 Let me paint you a picture with a my word-brush. A police officer leans on his car near the sidewalk of one of the more hipster neighborhoods of Seattle. In between sips of his delicious coffee, the officer sees three young adults, around 21 years old, shuffle out of a dispensary, guffawing and talking drowsily. One of them carries a plastic bag with a very recognizable leaf splattered all over it. Despite the roasted coffee inches from his nose, the officer detects the not-so-subtle aroma of cannabis wafting from the three bohemians. His face contorts as he resists the temptation to stop them—old habits die hard. He sighs, takes another sip from his coffee, and lets them go. Nothing to be done.

A couple of minutes later, he spots a gentleman sitting in the park across the street. He notices a plume of smoke rising from the man. After being unable to fulfill his sense of justice mere minutes earlier, he gulps down the dregs of his coffee, tosses the cup into a nearby bin, and storms over, propelled by an over-inflated sense of power and purpose.

When the officer arrives, his sees a man in his later years, puffing on a well-loved briar and tossing out breadcrumbs for the local wildlife. "Sir," the officer says, "you know this is a public park."

"Of course, officer," the wizened gentleman says after taking the briar out of his mouth. "I’ve been coming here every Sunday for twenty-three years. I used to come here with my wife; I would smoke my pipe and she would feed the pigeons. I always thought it was absurd. After all, they’re birds. Now that she’s gone, though, it doesn’t feel right not feeding the damned things."

Throughout this entire time, the officer has been glaring at the man’s pipe. "Sir, this is a public park. There’s no smoking in public parks." 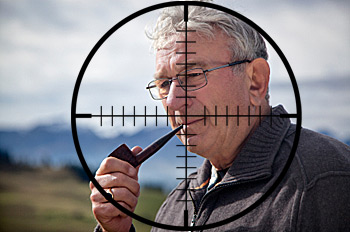 The old man pauses, clearly surprised. "I didn’t think I was bothering anyone. Did someone complain? I always choose a nice smelling tobacco for whenever I go out so that I don’t offend anyone."

"I’ve talked to you about this before, sir," the officer says, despite never having met this man before. His blood is still boiling from his feeling of impotence earlier. "I’m going to have to give you a ticket for this. We can’t have tobacco smoke infecting bystanders."

"I didn’t mean to cause any trouble," says the gentleman. With a second glance, he shoves his pipe in his pocket, and grabs his cane to leave, ticket in hand. At the same time, the three young adults come into sight, still reminiscent of Shaggy from Scooby-Doo and probably craving some Oreos.

This scene, despite its obvious hyperbole, depicts something that is a sad reality in Seattle, home of one of America’s largest and most prolific pipe clubs.

Earlier this week, I spoke with Dustin Babitzke (from The Greater Kansas City Pipe Club) about the vitriol directed toward tobacco, which results in similar attitudes towards pipes. That’s when Dustin said something that really struck me: "In Seattle, you’ll get worse treatment for smoking a pipe than you would for smoking marijuana." It’s not quite that simple, but the point remains. Here’s how it ends up looking in Seattle:

Here’s the real difference: cannabis has recently been legalized by the State of Washington, while tobacco continues to be more and more restricted. While tobacco technically has slightly fewer restrictions governing it, the number of restrictions placed on tobacco are growing, while those on cannabis are shrinking.

Many of the limitations being placed on pipe tobacco are shrapnel from the real problem that legislators are trying to fix: flavored cigarettes and Roll Your Own (RYO) tobacco. They have been told over and over again that flavored tobaccos are enticing adolescents to start smoking and that people are avoiding the increased tax on cigarettes by rolling their own cigarettes. Because the anti-tobacco crowd refuses to distinguish between different types and methods of enjoying of tobacco, despite evidence from their own studies, pipe tobacco gets hit by the effects of these actions.

If I may steal a little diddy from Smoky the Bear: you can prevent this. Pipe smokers are the only ones who can save pipe smokers. It is well known that one of the greatest qualities of pipe smokers is their laid back and easy going personalities, which, in some ways, may also be our downfall. This is certainly something that should light a fire under our asses.

Again, I’m not suggesting that legalized cannabis is the enemy, but rather our silence. We must make our voice heard, in whatever way we can. Maybe it’s simply being a gentleman in public and thus giving a good image to pipe smokers. Perhaps it’s not letting claims of “all tobacco products are the same” stand without challenge. Perchance it is taking a minute or two to write or call your local representatives in an informed and respectful way.

So many people laud the value of hoarding tobacco and filling up their cellars, like they are preparing for the post-tobacco apocalypse. Many of these same people, while complaining about the laws and restrictions being placed on pipe tobacco are only vocal on forums and in the safety of their pipe clubs, while remaining conspicuously silent in the public and legal sphere.

As Edmund Burke said, "When bad men combine, the good must associate". This is commonly rephrased as “All that is necessary for the triumph of evil is that good men do nothing.” I have no doubt that you are good and want only the best for our hobby. All that I ask is that you make sure you are doing something to help reach that goal and not simply blowing smoke.