The Ritual of Smoking a Pipe 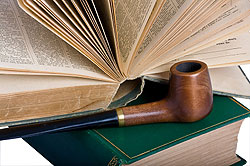 In his classic study, The Elementary Forms of the Religious Life, Emile Durkheim proposes a distinction between two types of objects—sacred and profane. Beliefs and behaviors that set apart the sacred from the profane is the realm of rituals. In our more secular society, the distinction between sacred and profane is still with us but in less dramatic fashion than we find in religion. Pipes can be thought of as sacred objects and pipe smoking as ritualistic activity.

Ritualistic behavior seeks to provide feeling states that accompany the instrumental to produce feeling states, usually positive feelings like pleasure and/or relaxation. Pipe smokers can attest that smoking the pipe produces feelings of contemplation and relaxation and other pleasurable feelings where our world becomes orderly for however brief a time. The same is true for cigarettes, except the feeling states are shorter lived since smoking a cigarette is only a five to seven minute ritual compared to the one to two or more hours of pipe smoking. Cigar smoking is more ritualistic than cigarettes, but less so than pipe smoking.

Cigarette smokers use their nicotine delivery devices for relaxation, whether it is during a break, after a meal or after sex. And yet nicotine is a stimulant. It is the ritualistic use of cigarettes that results not in stimulation, but in relaxation.

MORE READING  Oh, The Things We'll Do for Pipe Tobacco

We engage in cleansing rituals to keep our pipes free of polluting elements and to ensure a well-maintained pipe. Clearly part of this is instrumental. But true instrumentalists do not clean their pipes. They allow cake and char to build up on the pipe. Many of us have a "knock-around" pipe that we don’t necessarily take good care of. This pipe is used instrumentally. Instrumentalists cannot understand why people would pay more than $100, even less, on a pipe. Why care about grain or a blast? 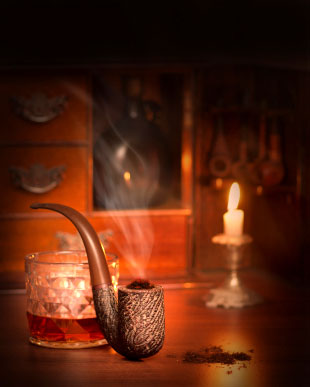 We can see the same sort of thing among pipe collectors. Many collectors will not smoke their collectable pipes. On the one hand, instrumentally, smoking the pipe will decrease its monetary value. On the other hand, ritualistically, smoking the pipe will detract from the pipe as a work of art. As a result, some of us have pipes that once bought we do not smoke. For example, two years ago at the Chicago pipe show, I bought an unsmoked Walt Cannoy wax drip, I still have not smoked it. It is the only pipe in my collection still unsmoked. I am having trouble using it instrumentally and I am not planning on selling it. So why won’t I smoke it (I will eventually I hope)?

Different churches or religious denominations divide the sacred from the profane differently. The same is true for the pipe world. It has not developed a universal consensus of beliefs and activities of all things pipe. Rather, there is diversity in belief and activity. The above-mentioned collector will not smoke a pipe for fear of desecrating it. Some suggest that the only true smoke of a pipe is its first smoke. Others believe that a pipe will smoke well only after it has been properly broken in. These beliefs are not individualistic; they are shared beliefs among those participating in the pipe world.

Smoking as ritualistic activity
We may think of rituals as institutionalized ways of behaving. That is to say, rituals are not performed by disconnected individuals in individualized ways; rituals are shared ways of acting. Rituals are repeated and repeatable social behaviors. They establish the proper way of doing something. Habits are routinized behaviors of individuals. Rituals are collective ways of doing something. As a result rituals have to be learned usually in a group setting. (With the advent of the internet a direct relationship to a group is no longer necessary, although it still is an indirect relationship.)

MORE READING  The Great Detective and His Pipes

Take for example the packing of the pipe. There are different methods for the proper packing that is not too tight or too loose, but is just right. Many of us learn "the thirds" method of packing a pipe. We did not need to discover it on our own. Eventually, once the correct feel of a properly packed pipe is realized, we may fill our pipes with the right amount of tobacco.

How often did someone teach us about the "faux light"? Who thought of first charring the tobacco before having the proper light of the tobacco? How did this knowledge become established in the lore of pipe smoking and how does it get carried down from generation to generation of pipe smokers?

What do you use to light the pipe? We know that torches are discouraged, even though there are safe ways to use a torch. The old-time rockabilly musician Jerry Lee Lewis smokes expensive Dunhills and lights them with a torch charring the bowl rims terribly. Most of us will not do this for fear of damaging our revered object. But others argue that soft flames are still too hot and will scorch the rim as well. They advocate only the use of matches. All of these are shared methods of lighting a pipe.

Once the pipe is lit, then there is the proper method of actually smoking it. Consider when many cigar smokers start to smoke a pipe. They often smoke the pipe too quickly making the pipe too hot to hold and perhaps burning it out. Others worry about lighting a pipe too often to keep it going. 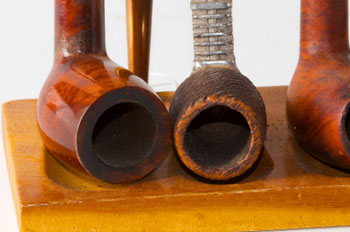 After we are finished smoking the pipe, we then need to show proper respect of the pipe by cleaning it properly. We remove the dottle rather than leaving it inside the pipe. We use pipe cleaners to remove what moisture and other bits that remain in the stem and shank. We may let our pipes rest or put them in their place on our rotation of pipes. Instrumentalists tend not to clean their pipes. I had an instrumentalist friend who would never clean his inexpensive pipes. Once they became too caked, he would just buy another inexpensive pipe.

While we may smoke our pipes alone, we also often find ourselves seeking out other like-minded people who also smoke a pipe. Like the ritual of sharing in a toast or sharing a meal, we often share smoking our pipes with other pipes smokers. We create a sense of conviviality between us. We speak of a brotherhood of briar. We form pipe clubs. In these group settings we learn new ritual beliefs and activities and we repeat those we have already learned.

Of course, much of the content of the forums on PipesMagazine.com are full of information regarding the proper methods of smoking. Some of these ideas are novel, not yet institutionalized, not yet shared, not yet ritualistic. Other ideas and practices are well-honed, the stuff of rituals. And whether novel or well-honed, they all have on thing in common—the reverie that we show to our pipes as the sacred objects they are.