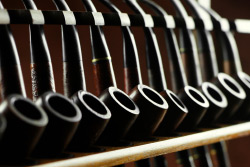 When briar was first used in pipemaking, the shapes and models hardly differed from those made from other materials. But by the time the briar pipe industry was, fully established in 1855-1860, pipe makers had realized the flexibility of the material, and briar pipes began to acquire their own characteristics. As a result, the demand for briar pipes grew very quickly and a basic range of popular shapes and models was developed. These shapes still form the foundation for current models on the market. To help both the new and experienced pipesmoker understand the myriad shapes and sizes available in the world of pipes, PipeSMOKE presents the following guide.

THE BILLIARD
This shape has become the most popular in briar pipes. It simply has a straight part called the shank, with the bowl mounted at a right angle (technically, it is not exactly 90 degrees; if it were, it would look wrong). The shank is extended by the part that is held in the mouth, called the “bit” or mouthpiece. This shape developed out of machine turning and probably owes its name to the straight cue used in the game of billiards. It can be made in all sizes, from miniature to giants. The Billiard has a number of variations. The Liverpool has a long shank and a short taper bit (mouthpiece); the Lovat, named after Henry Fraser, Lord Lovat – a Scottish laird of World War I fame – is like a Liverpool, but fitted with a saddle bit (a saddle bit has a flattened part for easier gripping); the Canadian or Lumberman, has a long oval shank with a short taper bit. Tall Billiards have been called Toppers, Eiffel Towers, or Chimneys: the Poker has a flat base so that it can stand up.

THE APPLE
Almost as popular as the Billiard, the Apple needs little explanation as to the origin of its name. Quite simply, it is shaped like an apple. This particular style grew in popularity in the 1920s and is made in a variety of sizes that run rather small in England, but in Europe and the U.S., larger models are preferred. This style was popular with square shanks (so they could stand upright) in the 1950s and since then, a number of elegant models have been produced with wide oval shanks and saddle bits.

THE POT
The name speaks for itself It is a relatively modern shape which hardly appeared before 1920 and was first produced as a small model for the British market. But, as with the Apple, European and American smokers wanted larger models. The Pot has the advantage of having thick walls, and may be slightly heavier than the Billiard.

THE PRINCE
The Prince was named after the Duke of Windsor’s favorite shape, when he was Prince of Wales, and it first appeared in the 1920s. The Prince’s wide base and rounded shape makes it look quite elegant and it is often fitted with a slightly bent bit. It is normally made in three sizes (small, medium, large) and there exists a variant called the Cognac that is based on the shape of a brandy glass.

THE DUBLIN
The Dublin is probably the oldest briar pipe shape – like a cone, either slight or extreme – owing its origin directly to clay pipes. The reason for the name is quite obscure and no satisfactory explanation has been found. A variant of the Dublin is the obtuse-angled Zulu (sometimes called Yachtsman or Woodstock) and is made with either a round or an oval shank. A variation with an upright bowl and extreme cone is called a Bell Dublin.

THE BULLDOG
This is one of the original briar shapes and owes its name simply to its look: rugged and likely to be smoked by outdoorsmen. The shape is distinguished by its diamond-shaped bowl and shank and usually a couple of lines cut around the widest part of the bowl. Bulldogs are fitted with either taper or saddle bits. There is also a squat version called a Cad. The Bulldog shape was very popular at the turn of the century and included short models called Chubbies or Golfer’s pipes.

THE BULLCAP
"Bull" comes from the bulldog shape, and "cap" because the top is rounded and looks like a cap one wears. The Bullcap first appeared in the 1920s, is generally smaller than the Bulldog, and was very popular in Great Britain and Australia up to the 1970s. It is not seen so much now, except in special larger freehand models. The Pear is basically similar (with a wide crown) and looks like an inverted pear.

THE BENTS
Bent pipes were very popular in the 19th and early 20th centuries, but from 1919 to 1940, their popularity waned. They made a comeback in the ’50s and ’60s, and are now as popular as they were a hundred years ago. Semi-bents, with less curve, are also popular. In Bents, you discover all the basic shapes that have been described so far. We can go back to the Billiard which gives the Full Bent. There can be a number of variations depending on size and the manufacturer, but essentially they are all Full Bents. Those with thick shanks are occasionally called Hunters. Apple-Bents are fairly common and the Bent Pot is made only by a few makers. The Bent-Prince is found in a number of collections and has acquired a character of its own and is sometimes found with an oval shank. Bent-Dublins are very attractive pipes and have become quite popular; they are to be found in most collections, sometimes with diamond-shaped shanks. A notable type of Bent which has been a favorite for over a hundred years is the Hungarian Bent, which has parallel sides (like a high pot) and is also known as the OOP Paul, named after Paul Charger, the South African leader of the Boer War, who preferred this shape. The Bent-Bulldog has acquired its own name, the Rhodesian, which is made with a round shank and can be found in diamond-shank versions as well. In continental Europe, the Rhodesian is often called a sports-pipe. Bent-Bullcaps are generally larger than the straight ones, but are more often found among freehand models. One last Bent that is a shape on its own is the Calabash, directly copied from the Calabash pipe, which is made from the hard shell of an African gourd and fitted with a meerschaum bowl or lining.

FREEHAND MODELS
Freehand pipes do not require machines to shape the models (apart from a basic turning lathe to hold the briar piece). The operator uses hand-held tools, special shaping wheels, or paper-sanding belts. Freehand pipes have been made by pipe makers such as Dunhill and Charatan for quite a long time, but in the 1950s, new Danish makers adopted this method, particularly seeking to use the natural flow of the briar grain. The Danish “revolution” transformed the whole concept of pipe making in the quality sector, and greatly influenced modern pipe making, so that now most collections include a number of models referred to as “Danish shapes.” This encouraged new pipe makers in England, Italy, Germany, the United States, and in a number of other countries. The result of freehand making are highly individualized pipes.

BITS (MOUTHPIECES)
The majority of bits are made from vulcanized rubber, simply called “vulcanites,” but over the past two decades some manufacturers have used acrylic on their better quality lines. Acrylic is more expensive but has the advantage of retaining its color, whereas vulcanite can fade. Acrylic is, however, harder on the teeth and some smokers prefer softer vulcanite. Bits are generally black, but a type which is dark brown with black streaks, called Cumberland, has also become popular on quality lines. There are basically two styles of mouthpiece: taper and saddle. The taper has straight converging lines, while the saddle is flattened for easier gripping. Seen from the top, bits can either be narrow or fishtail (opening out fanwise). There are variants of types of lips (the part held in the teeth), with the best known being the Peterson Lip. 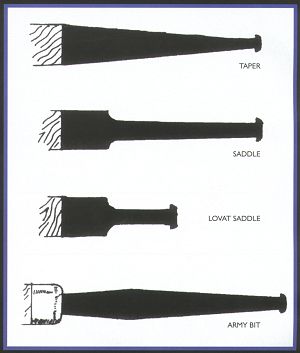 MOUNTS
This is the name given to bands that are often fitted to the shanks of pipes. They can be made of base metal, but high-quality pipes will have silver or even gold mounts. Although bands are ornaments, they also have a practical use of protecting a part of the pipe which can be vulnerable to splitting. Apart from silver and occasionally gold, mounts can be made from horn or various types of semi-precious stones. A variant is the Army mount, which is rounded off at one end and takes a special bit that tapers into it. The idea is that the bit can be easily removed to eliminate the risk of breaking the peg. It also allows longer or shorter mouthpieces to be used readily. The Army mount used to be particularly popular with sailors. A variant of the Army is the Spigot. Here, the end of the bit going into the shank is fitted with a silver mount. The result is quite attractive and also ensures further protection against breakage in a pipe’s most vulnerable spot.