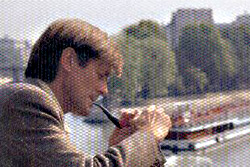 April in Paris: From the classic tune by Vernon Duke to Count Basie’s big band playing it "’One More Time," this souvenir of our cultural history transcends generations. PipeSMOKE visits Paris in the spring and tags along as George Fricker, in town on extended business, decides one morning to buy a new pipe. With photographer Pierre Vauthey, we followed George to a few of the best smokeshops and recorded how he found not only the briar roots he wanted, but the blossoms of romance. Here is the treatment for our story.

In the cafe on a mild Saturday morning, George sits alone, content after coffee and croissant, smoking his well-used briar, reading the newspaper, humming:

No office to go to, no business lunch, no telephone, fax, email demanding attention. No Sabine … no more. Nothing but April in Paris; a warm, soft day. What to do? Call Lisa? She sleeps ’til noon on weekends. Max? He’d be out playing tennis. Oh well, Paris is a walker’s city, so George can wander and find what he doesn’t know he’s looking for. It is the kind of day not to make plans, but to let them happen. As the French poet, Mallarme, once wrote, "a throw of the dice never … will abolish chance." 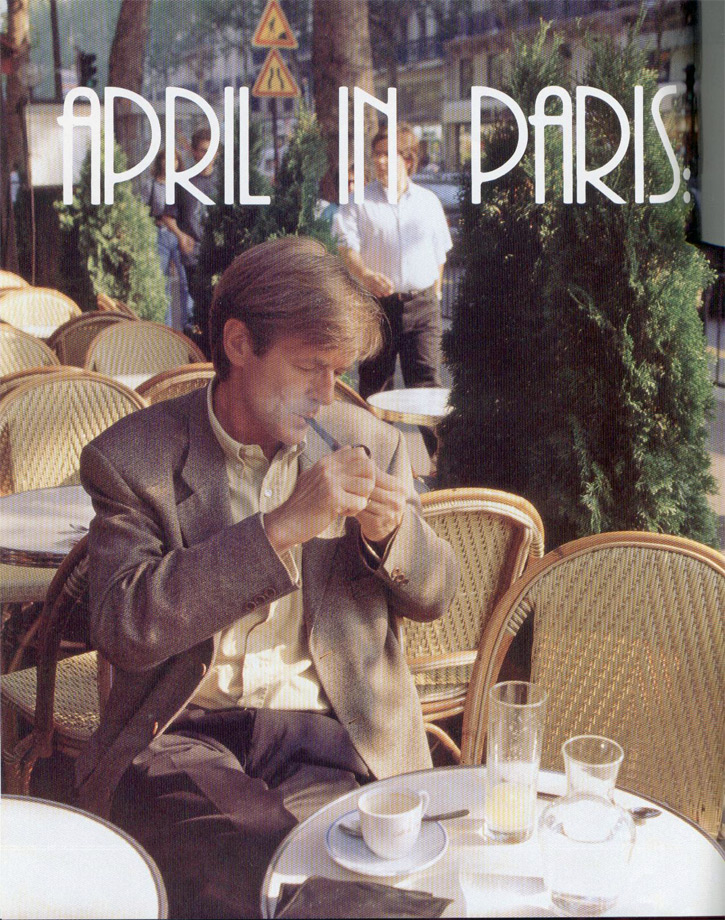 A short amble to the riverbank and the bookstalls, to browse and maybe find some new/old book he’d like. A painter sets his easel on the street to catch the first glut of tourists wandering across the Seine from the Louvre on the opposite bank. Teenage American girls wearing coordinated grunge uniforms took through stacks of used CDs and talk too loudly. Then, on a bookstall with large art books, there is a sizable tome on pipes. Beautiful pictures of gleaming briar polished to show the highlights, a cornucopia of tobacco spilling its contents across a two-page spread. The book is too big to carry around all day. He’ll come back another time. But George knows now what to do today.

It is the perfect day to buy a new pipe, and he has all the time he needs, with no one to answer to. Alone – not that he wanted it that way – he can indulge himself. 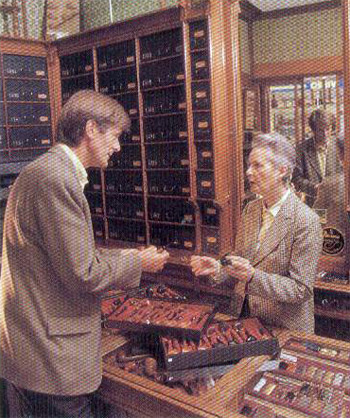 He turns his aim towards the hub of the 6th arrondissement, the "Latin Quarter," where Boulevard Saint-Germain crosses the Boulevard Saint-Michel, the center of student and intellectual life in Paris. Shades of Picasso, Hemingway, Fitzgerald, and Matisse haunt the cafes and side streets, bookshops and galleries. There at 24, Boulevard Saint Michel, is Au Caid, on the same corner it has occupied since 1878, its classic oak fittings a throwback to the way George likes pipeshops to look, except that this one is authentic, time-honored.

MORE READING  Have Pipe, Will Travel

Looking in Au Caid’s window, George spots a few unusual pipes that speak to his sensibility, and enters the shop. Mme. Schmitt, the fourth generation of her family to own Au Caid since its founding, attends to George herself. A glance at him and the classic "neogene" (billiard) he held, and Mme. Schmitt pulls out a bin of standard shapes by Chacom and Butz-Choquin, the two major French pipe manufacturers, whose stock fills three-quarters of her inventory.

But George isn’t keen on a classic. He admires two hand-carved bent pipes, one by Chacom’s master turner, Pierre Morel – with his hallmark elongation of the bowl top – and the other from Butz-Choquin. George buys both. "Must be nice to myself today," he tells Au Caid’s owner, and asks her to send the pipes to the address on his business card. "Something more modern to take with me?" he asks. "A designer look, perhaps?" George needs to break the mold today … adventure in a small way.

The proprietress shows him a Chacom "Volute," an award winning design with sculpted flowing lines and an inventive use of molded acrylic fused to the briar. George is hooked. "It is worthy of a museum exhibit," he comments. "A lot of younger men are looking for the more modern pipes," Mme. Schmitt tells him. "The ‘Danish’ style," she says, "is coming back into fashion."

On the footbridge crossing the Seine, George thinks to take a look at the Monet "Waterlilies" in the Orangerie. Deciding that the Volute is calling to be smoked, George lights up, only to find that he can’t smoke in the museum. He returns to the left bank, trailing fragrant smoke past the Musee d’Orsay, the brilliant architectural adaptation of an old railway station to an art museum (mostly modern), past the palace housing the Foreign Office, where he has spent the past week negotiating for a client, past the regal esplanade of Des Invalides. A left turn onto the Rue Surcouf brings him to the SEITA Museum (tobacco history, art, and artifacts), where the bookshop has the same book that inspired him earlier, but new and for less money. He arranges to have it sent home to New York. 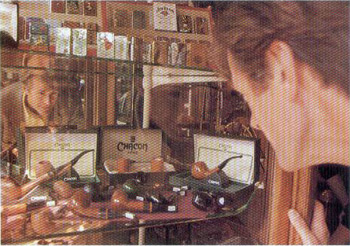 An automatic impulse puts him in a taxi en route to the Avenue Victor Hugo, not far from the Arc de Triomphe, one of the city’s posh districts. Not until he pays the fare does he realize that he doesn’t live here anymore. Sabine still does, but the concierge regards him with suspicion, as always, and says that his ex is gone for the weekend.

For old time’s sake, George stops in at Lemaire, just down the street at 59, Avenue Victor Hugo, feeling a bit like one of Les Miserables himself. Mme. Pihan, the proprietress, does her best to cheer him up by bringing out a rare packet of tobacco – "La Escepcion" from Havana, which he likes to mix in with his regular blend for a change of pace – that she’d put aside for him. Touched by her kindness, George looks at her pipes, but they’re mostly classic shapes, and Dunhills at that. He gets those in London. Couple of nice Larsens and Savinellis and a vintage Charatan, but he decides to pass. This is where he used to buy his cigars regularly: best Cubans in Paris. With an au revoir and a’ bientot, he’s off, grateful for her kindness and discreet, knowing silence.

Pierre Voisin, the current owner, is a skilled repairman, possibly the best in Paris. A deft touch on the buffing wheel, and the old, worn pipe George started the day with looks brand new.

"I can resist anything but temptation," George tells Voisin as he looks through a selection of virgin briars made in Saint Claude for A La Pipe du Nord. "True pipe connoisseurs will buy only virgin briar, because they know the true taste of tobacco it produces," Voisin says. "In France, they want the classics: billiards, bulldogs, and bents. The pipe is an instrument to bring out the pleasure of tobacco, like a wine glass or brandy snifter." An expert on detail and a collector of historic pipes and accessories, Pierre Voisin ought to know. He acts as technical advisor and supplier of smokers’ items for many of France’s stage, film, and television set, and costume designers.

George chooses two virgin-briar classics, a bent and a billiard with a tight-knit birdseye grain. Voisin approves: "A connoisseur’s choice," he says.

Next stop is Le Pot a Tabac at 28 Rue de la Pepiniere, near the Mace St. Augustin, because George wants some new tobacco. Spring in Paris demands a new beginning, and Monsieur Lafont is one of the few French tobacconists who opens every tin and pouch, and keeps samples in labeled airtight jars.

Behind the counter, a friendly blond woman with a bright smile suggests two English-style mixtures that George has never tried. Intrigued by her, George tells her that he’s considering buying a new pipe, just so he can linger awhile.

Monsieur La font overhears and begins to display his treasures, Chacom and Butz Choquin classics. "Oh no," says the blonde, taking over from her father, who introduces her as Jeanne. "A cool pipe is what Monsieur George wants. The taste of our generation," Jeanne says. She shows him a Volute, and George admires it dutifully, but says he owns one already. More pipes appear for his approval. Finally, after a heady half hour of answers in the form of questions – "Why have I never seen you here before? Have you never been in on a Saturday?" – he buys two: a Butz-Choquin "Millesime" (Pipe of the Year), and its Chacom counterpart. With his purchase in hand, George takes the plunge, asking Jeanne if she’ll have a drink with him at the café across the street. "If you hadn’t asked me, I would have asked you," she reveals. Outside, Jeanne laughs when he shows her the Volute he bought this morning and confesses that he’s bought seven pipes today. "And did they all come with women?" she asks, smiling. "None so beautiful," he answers. 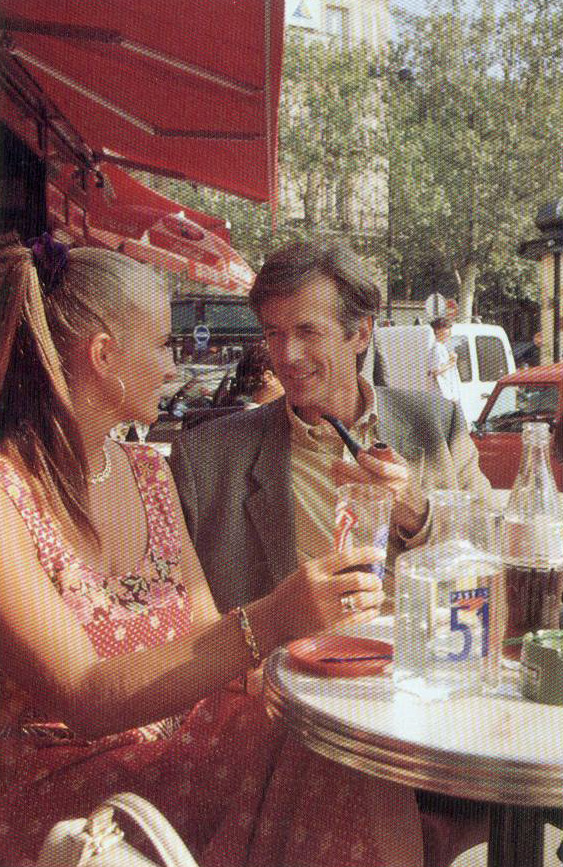 "I never knew the charm of spring,
Never met it face to face.
I never knew my heart could sing,
Never missed a warm embrace, till April in Paris.
Whom can I run to,
What have yoyou done to my heart?" 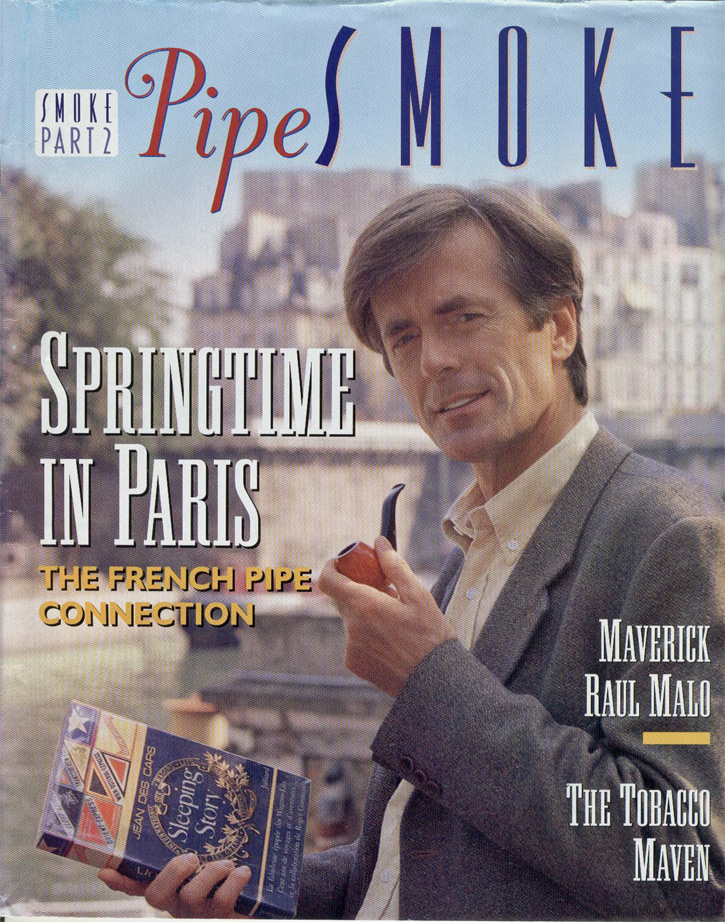