Have Pipe, Will Travel 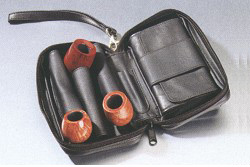 One of my dearest friends since my college days comes to our country house for a weekend, packing more than I take for a two-week trip to Europe. His pipes accompany him, in a purpose-built attaché case that holds a dozen of his favorites. I frequently travel on business and carry a spare suit, a few shirts, and other amenities of a man’s life, with two pipes nestled in my briefcase and one in my jacket pocket. Who is right, and who is wrong? That, ultimately, is for the reader to decide, as each approach is a reflection of personal tastes and perception.

While I zip on and off planes and through airports as others wait for their luggage, my friend is concerned that, should he happen to meet the Duke of Cockamundo en route and be invited to the palace for dinner, he might not have the proper attire. And what would the Duke think if my friend had a pipe less worthy than the perfect, straight-grained Charatan Supreme he purchased in London in 1959, or the Dunhill Root he acquired the following year when, by chance, he met Alfred Dunhill himself?

Surely I exaggerate, but most of us are prone to a little gloating when happening upon confirmation that our way is the right way. For instance, a recent magazine article revealing that Jess Chonowitsch – surely one of the greatest living pipe carvers – once traveled from Copenhagen to Los Angeles with but three pipes in his bag, served to illustrate my point in a nutshell. I loved it, but the author of the article, who prefers to travel with a plethora of pipes because of the pleasure they give him, seemed shocked. Whichever side you’re on, here are some ways to approach traveling with pipes, whether spare or replete.

If you are going away to a family cabin, at the shore or in the mountains, wrap the pipes you wish to take individually, in tissue or in the cloth or leather bags they came in, and place them in a shoebox. For tobaccos, pack a couple of large tins or baggies filled with favorite blends, and you’re in business. 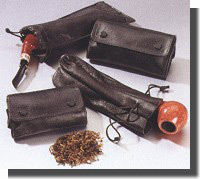 If you’ll be on the move, several different approaches can be used. A simple and spare travel style involves carrying two or three pipes, each packed in the individual leather bag (“glove”) that came with the pipe, or that can be bought for a few dollars at any real pipe shop. The leather cushions the pipes against scratching and is usually sufficient. I prefer to place the long plastic bag that pipes are shipped in inside the leather bag, to avoid having the untreated leather inside pick up the wax or oils from the bowl’s finish and dull it slightly. Even this is not usually a major problem, as you can restore the shine to any pipe with a vigorous rubbing on a piece of cloth, or even your handkerchief.

Minimalists who shun the luxury of traveling with many pipes must run a pipe cleaner through the pipe immediately after smoking, and swab out the inside when the pipe is cool. Don’t slip it into the plastic sleeve right away, because you want the inside of the pipe to dry, and this requires air circulation. Place the leather bag (leave the draw string loose) in your pocket or briefcase head down, just as if you were racking the pipe. There is nothing wrong with smoking the same pipe again that same day, as long as you’ve allowed it to cool, and have dried it out as best you can with pipe cleaners. Naturally, if you prefer a pipe in your mouth at many times during the day, you will have to alternate pipes, and will want to carry an additional stock.

I usually carry two smooth, straight pipes and one sandblast, the latter because it will take more punishment on the move, from resting in rental car ashtrays and getting bumped occasionally. Unless your evenings on a pleasure or business trip are spent reading or watching TV in your hotel room, you’ll probably get more good mileage out of a straight pipe, as opposed to a fully bent model.

Another method for taking along three or four pipes, is to place two in a pipe case packed in your luggage, and keep one or two in your pocket or briefcase for alternate activity. There are many good pipe cases available that will do the job, but here are some caveats. If the case is too big, it won’t fit comfortably in the briefcase or carry-on luggage. The wedge-shaped, zippered two-piper has a top that folds over, and sandwiched between the back walls is a fairly capacious pouch lined with surgical rubber. It holds a substantial amount of tobacco (more on this later). But it is only good for two medium-sized pipes, as larger models strain the zipper so it won’t close properly or, worse, will burst. The slightly larger, rectangular two- or three-pipe cases with a zipper all round are more capacious and don’t take up much more room in your luggage. 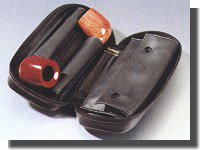 The traveler should beware of cases that position the pipes head to head so they can knock each other in transit. Don’t buy these if you are averse to scarring your precious pipes. (Even when you carry pipes in your pockets, always use gloves if you have more than one.)

Most cases have a pipe-tool compartment inside that can allow the tool to protrude and scratch your pipes. The easiest solution is to place your pipe gadget in the outside compartment of the case, where it won’t touch the pipes. The same goes for pipe cleaners or anything with a metal edge just waiting for the cover of dark, close quarters to attack the briar! Additionally, many cases are furnished with detachable interior tobacco pouches, some of which have snap buttons that brilliantly press against the pipes when the case is closed, especially when the pouch is bulging with tobacco. Avoid these, and make sure that nothing but leather presses against the pipes when the case is closed.

My preference is a two-pipe wedge case that holds tobacco away from the pipes, and situates nothing next to the pipes, even though there’s room inside for a tamper, knife, and cleaners. These items, along with a spare lighter, can go in the outside zipper pocket, away from the pipes and the tobacco. Alternatively, if the pipes chosen for the particular journey are larger ones I place the pipes in a rectangular zipper case without a built-in pouch, and fill up a traditional soft-leather roll-up pouch with tobacco and put that in the case opposite the pipes. Another common pitfall is a pipe case with a tobacco pouch that is miniscule and doesn’t hold more than a day’s supply of tobacco, and/or allows the tobacco to dry out too quickly. My own solution: don’t waste your money on a case with a dippy little pouch. Buy a case for your pipes and carry the tobacco separately, or roll up a larger tobacco pouch tightly and place it in a two- or three-pipe case.

Roll-up pouches are most likely to keep tobacco at proper humidity longer, but they are designed to be confined to a pocket. A roll-up dropped into a briefcase or in luggage has a tendency to unroll and spill. A rubber band is ugly but effective, or else, buy the type of pouch that has a box form when opened, but folds closed and snaps shut. Another practical but unbeautiful method is to carry your tobacco supply in a plastic bag in your luggage, only shifting a day’s supply, at a time to your pouch. Most traveling pipesmokers carry too much tobacco in their pouches, and it dries out, however expensive the pouch. I use a small, one-day supply snap pouch in my back pocket when I don’t wear a jacket, or a small one-day supply roll-up, folded flat in a suit or sports jacket pocket.

The main stash place of tobacco for the light traveler is in a plastic bag, and here’s a tested method for achieving a strong seal: place an ordinary plastic bag sufficient for the tobacco inside a zip-top bag. The inner bag can be rolled down as the supply diminishes, and you should expel air from the outer baggie before you seal it. Smokers who buy tobacco in commercially packed pouches need only pack a few pouches of same in their luggage. Most average smokers use two to four ounces (50 to 100 grams) of tobacco a week. If you buy the imports in flat tins, one or two extras in your baggage will be sufficient to keep your one-day pouch supplied with the precious weed. Round-top tins with a screw-down lid serve best. 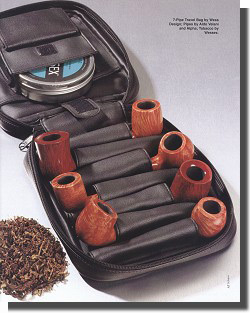 For the smoker who wants to take along seven pipes, I prefer an excellent case that zips open to lie flat, and holds the pipes in an alternating stem-to-bowl arrangement. The slip sleeves are long enough to prevent any part of one pipe from scratching another. Opposite the pipes is a set of slip pockets fastened with Velcro, including a full rear pocket for cleaners and a smaller one atop that is deep enough so that a tin of tobacco placed there will come nowhere near the pipes. Atop this pocket is another, smaller one for a lighter, again with a Velcro flap; two deep vertical slip pockets on either side of the tin holder can hold additional pipe paraphernalia well out of the way of the scratchable briar. (I still am nervous about exposing pipes to metal that can jiggle loose and mar them, and when I use this case, I put the pipe tool in the outside zipper pocket or in the closed pocket for the lighter.) Designed by Bernie Kopp, a pipesmoker who owns Martin Wess Inc., the leather manufacturer of Wess Design products, this case was made by a pipesmoker for pipesmokers, bearing in mind all the lessons learned by experience.

Another classic design that is making a return is a six-pipe carrier originally made for Dunhill, and now reproduced with exact fidelity by Wess Design, and with some variations by Klaus Ueberholz. This case is for purists, and holds six or fewer pipes with a double strap system in pairs, placed alternately on a flat surface. When the soft side flaps are folded over the pipes and the case is rolled up, no pipe touches another; the case is secured with straps around the outside, and fits handily into your luggage. 1 have an old, no longer made Dunhill roll-up case that I used for almost 40 years, which I showed to Kopp recently. He liked it so much that he’s now bringing his version on line for the pipe renaissance we all know is happening.

Choose your paraphernalia wisely, according to your needs, then travel well, secure that your favorite pipes and tobaccos will be in perfect shape for your happy landings.