From Dutchess County to the Loire Valley 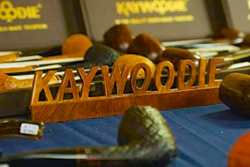 The Kaywoodie Christmas Dinner and Northeast Regional Slow Smoke Championship was the highlight of my holidays this year. There aren’t enough pipe parties these days, and this combination pipe show-swap-sale, gabfest, dinner, and competitive event is the perfect mid-winter reunion for old pipe buddies and new. Since I was unable to attend the Chicago show or any others this year due to a hectic schedule, Kaywoodie was the one place I’d be seeing many of these folks in 2014. Amid all the stress and obligation of the holidays, this was sure to be the anodyne I needed. 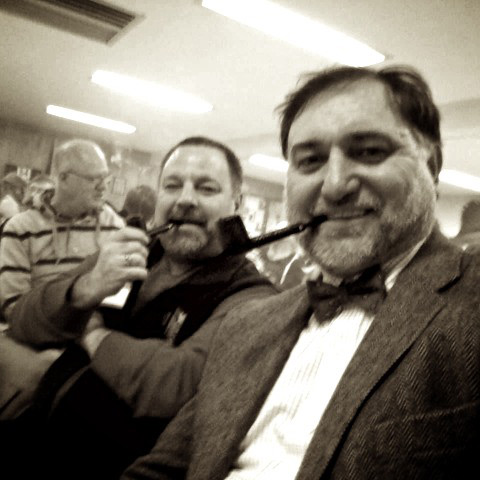 I probably shouldn’t even be telling you about this—the party has gotten bigger every year, outgrowing the venue. This season’s fest was held at the Southern Dutchess & Putnam Sportsmen’s Association in order to accommodate the fifty-plus attendees. The club is a stone’s throw from Kaywoodie’s new digs in New Windsor, New York. Their prior address, an old converted hat factory in Peekskill, was a wonderful relic of a building—more a sprawling complex, really—and will be missed for its anachronistic charm. Kaywoodie’s current site is quite a bit smaller, but thanks to the Hudson Valley Pipe Club’s own Dennis McMahon and Howie Rothstein, both members of the SDPSA gun club, we lunters were generously welcomed to come fumigate their den for the day. On behalf of all the guests, I’d like to extend another "thank you" to them for the warm fireplace and all-around hospitality they offered to make this year’s event better than ever. 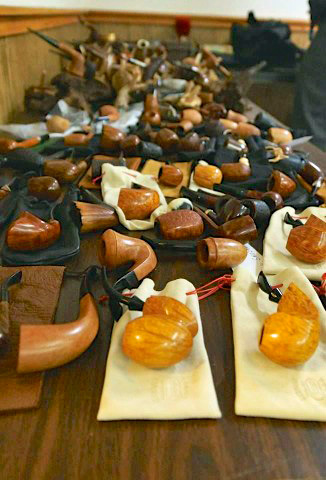 A thing of beauty is a joy forever …
(Photo: Matthew Meidt / Hank Saatchi) 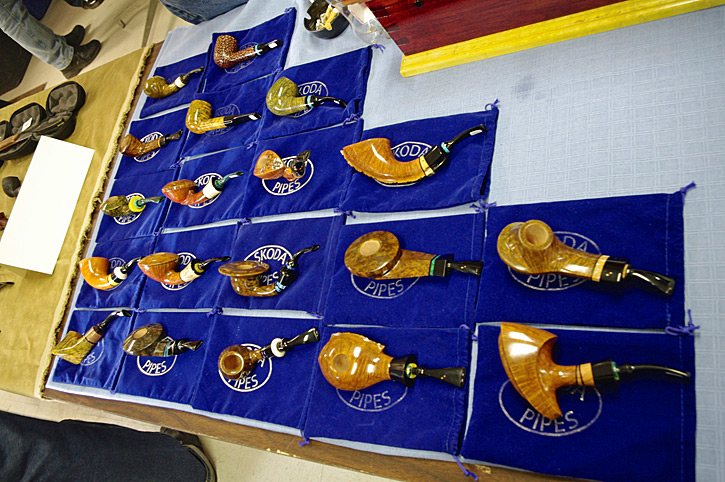 Pipe shows are the best place to meet pipe makers out in the wild. Displaying their latest works were the likes of Joe Skoda, Rolando Negoita, Paul Bonacquisti, Tim Hynick and, of course, the Kaywoodie marque and its helmsman, Bill Feuerbach. Vendors also included Neil Flancbaum and his Smokin’ Holsters, Neal Yarm’s exotic pipe stands, and a slew of estate pipes from the usual suspects. 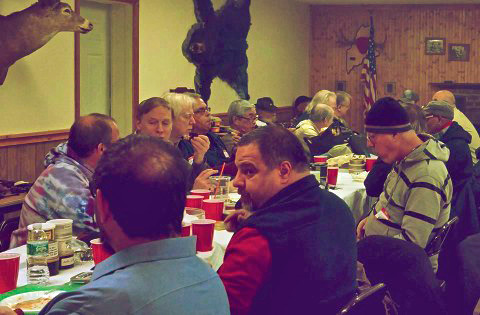 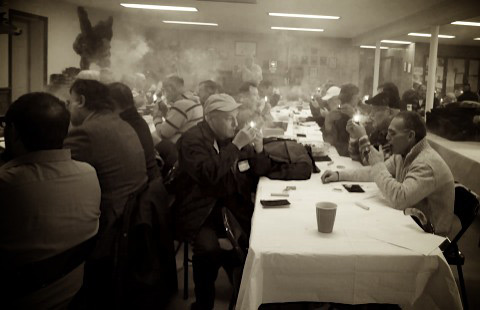 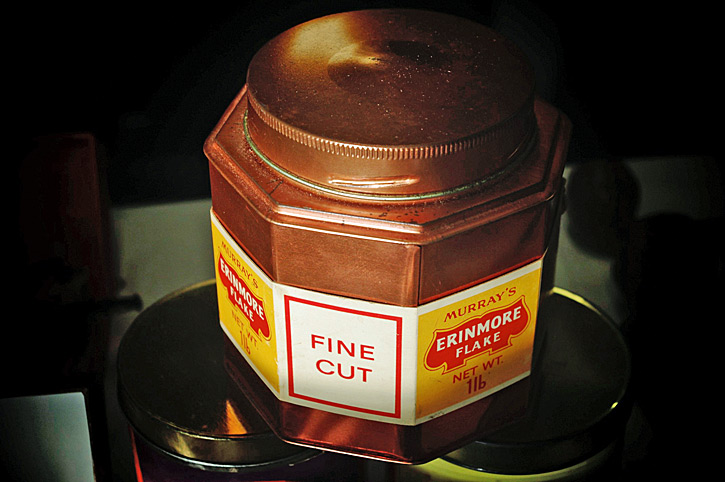 The event culminated in perhaps the world’s most counterintuitive sport: a slow smoking competition. Contrary to most contests of skill, wherein participants race toward their goal against the clock, pipers prefer their sport to just … take … its … time. Armed with three grams of tobacco, two matches and a tamper, and the same contest pipe for all provided by Kaywoodie, competitors are allowed five minutes in which to pack and light their pipes … and then see who can keep them successfully producing smoke for the longest time. Last year I took home the booby prize for my official time of less than five minutes—a bag of matches with which I am still proudly lighting pipes. This year, determined to vindicate that performance, I posted a personal best and coasted into seventh place with forty-four minutes; still not enough to rival the winner, Les Young (‘lestrout‘ to you forum lurkers), whose nearly hour-and-a-half smoke won him a gorgeous Rolando Negoita creation as his prize. I’m gunning for you next year, Les. 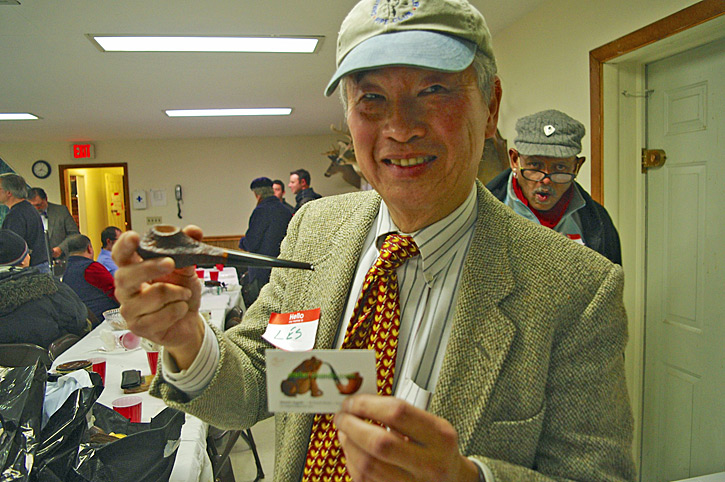 Les and his Negoita trophy. 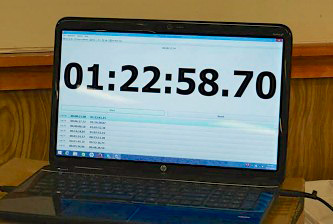 That’s all great … but where does the Loire Valley fit into all of this? As Rick Newcombe eloquently described in his recent article here, it takes a village to raise a pipe show. Without the selfless efforts of the organizers, particularly Bill Feuerbach (who makes every one of the contest pipes by hand for the event!), there would be no event. Further, the generosity of donors like Sutliff Tobacco prop up the event and ensure that everyone walks away with a gift of a tin or three to help recount their memories. In addition to my coveted Christmas Shellcraft, my prize for seventh place was another Shellcraft, a #10 bent billiard in a natural finish. A surprisingly capacious bowl for such a delicate pipe, it begged for an aromatic to break it in. 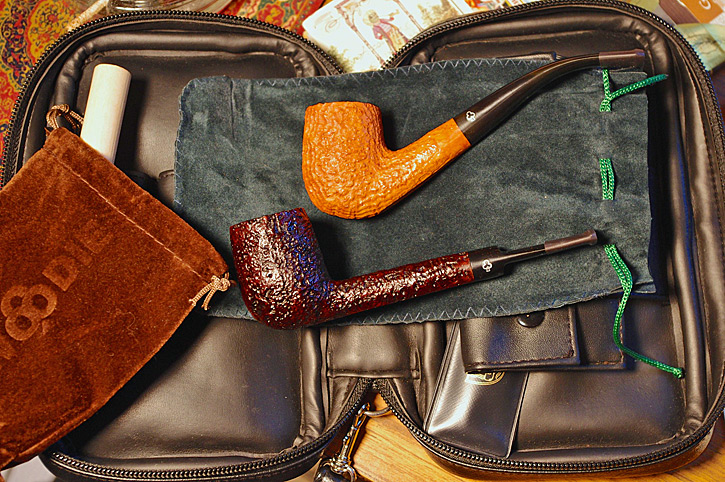 My pair of Kaywoodie Shellcrafts for 2014. 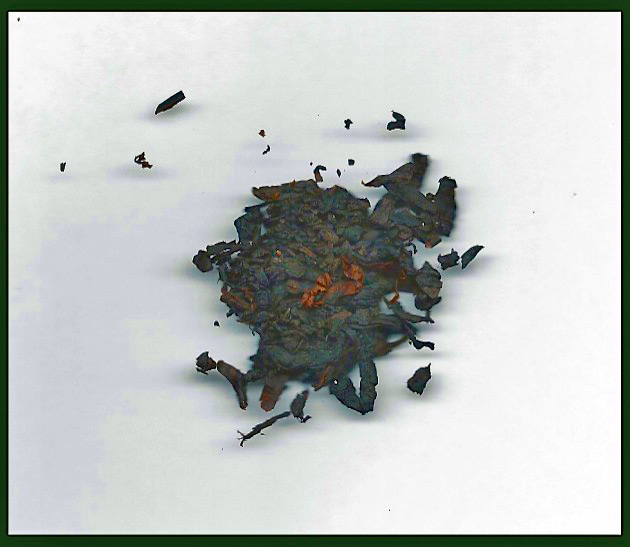 What we plant in the soil of contemplation, we shall reap in the harvest of action. –Meister Eckhart 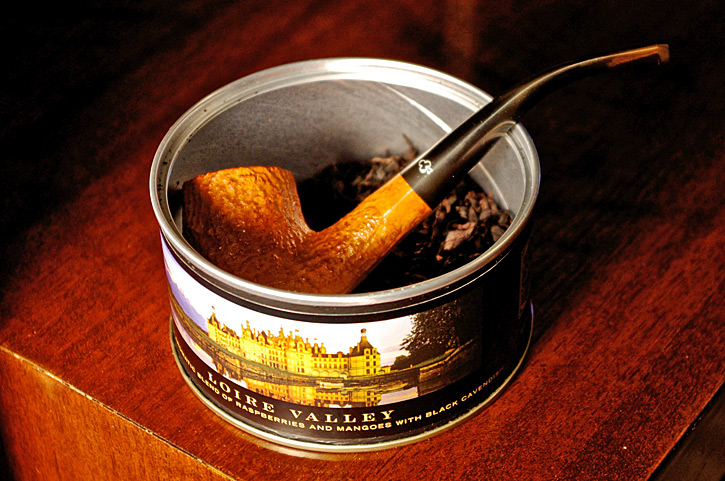 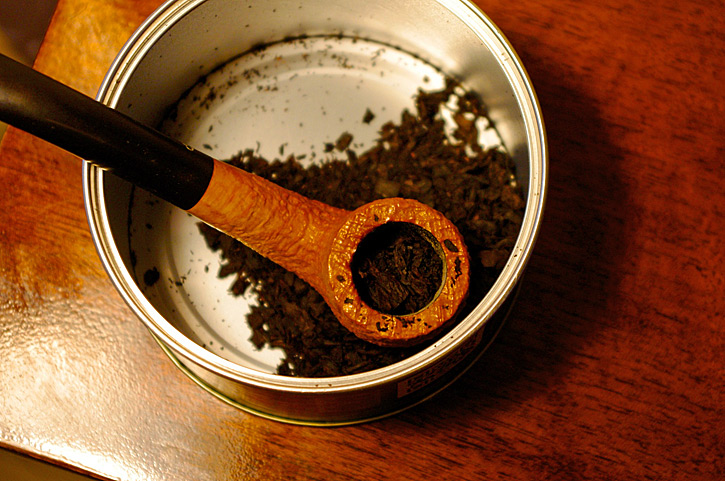 Only if you have been in the deepest valley, can you ever know how magnificent it is to be on the highest mountain.–R.M. Nixon

Sutliff’s Loire Valley was one of my takeaways from the dinner, and unfortunately didn’t last very long in that capacious bowl. A full Cavendish concoction of raspberry and mango, it presents jet-black leaf, as dark as the loamy soil of its namesake, that literally bursts with fruity aroma, yet smokes surprisingly cool and dry. After an afternoon of dry Balkan blends, this smoke made for a most excellent dessert and carried me through the rest of the weekend. I can hear some of you scoffing already—he breaks in a pipe with a heavy-handed aromatic?!?—to which I’ll reply absolutely, for this pipe’s destiny is to be an aromatic smoker, and it did the job quite thoroughly. Cavendish blends like Loire Valley benefit immensely from a good-sized bowl; it lets the moisture wick through the tobacco to the sides of the chamber and allows a flatter burn area to develop on the top, while the relatively thin walls serve to help me monitor the heat, and thus temper my cadence while smoking. Enjoying the taste of Sutliff’s smoky homage to Chambord liqueur while studying the tin’s depiction of the Châteaux de Chambord wasn’t the worst way to wind down the holidays, to be sure. 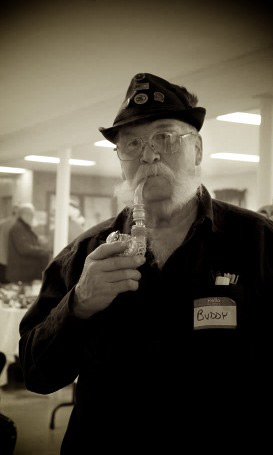 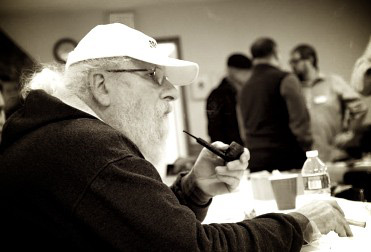 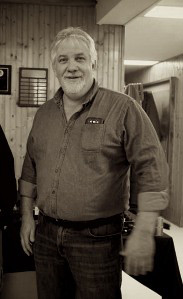