Twain and His Creations Arrive in Corn Cob Fame 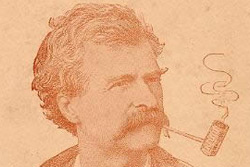 A few months ago a friend of mine took a look at my pipe collection and furled his brow slightly. "You know," he said, "You wouldn’t burn the rim of your pipes so badly if you loaded them less full, smoked inside, and altogether avoided the wind."

True. And my nicer briars would prefer I stuck to those rules. However, I’m the kind of guy who hates to feel owned by the things I own. I almost exclusively smoke outdoors and I don’t ever want to say no to a bowl just because it’s windy. And while these reasons are certainly all good reasons to smoke primarily cobs, I smoke corn cob pipes because nothing, in my opinion, offers as consistently good of a smoke. My cobs never gargle, stay clean almost by themselves, and forgive me when I drop them on the road. Every time I see a friend take out a pipe cleaner and use it to clean out moisture mid-smoke, I remember why I love my cobs so much. You can therefore imagine my excitement when Missouri Meerschaum recently released new pipes.

These three new pipes are named after Mark Twain, who has been slowly becoming something of a hero to me, and two of his creations—Huckleberry Finn and Tom Sawyer.

For reference, my two favorite pipes by Missouri Meerschaum are the Pony Express and the Eaton. The Eaton is basically the Pony Express with a bare cob bowl (no plaster applied). I tend to smoke while clenching, and due to it’s extreme light weight the Eaton is particularly easy to clench while lunting through a mega city or chasing my children around in the grass. The Huck Finn and Tom Sawyer are slight variations on these themes. 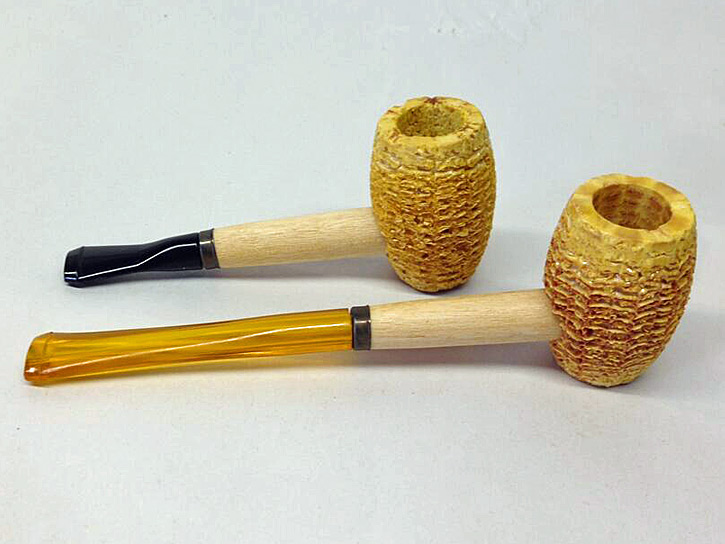 The Tom Sawyer on top and the Huck Finn on bottom

The Huck Finn is slightly longer than the Eaton with a longer amber bit and the the Tom Sawyer is shorter, enough so it could be considered a nose warmer. Both have a straight shank and the same bowl size as the Eaton and Pony Express, but they’re something in-between a bare bowl and the fully plastered bowl; Missouri Meerschaum has referred to this finish as "varnished". While the Eaton is just a plain (often white) cob, the Finn and Sawyer are a deep golden yellow color, but the various indentations of the cob are all still visible and tangible rather than being smooth like a plastered pipe. The varnish feels to me like it adds some durability to the bowl, though I have never had an Eaton burn out.

The Huck Finn and Tom Sawyer pipes are perfectly named after the type of people who would be running around outdoors while smoking their pipes. This summer I’ve enjoyed the Huck Finn stuffed with some Briar Fox while sitting beside a small lake in Wisconsin, and while riding a bike around my brother-in-law’s neighborhood in St. Louis. I’ve been smoking Missouri Meerschaum’s new Great Dane tobacco in the Tom Sawyer while grilling on a back porch with a friend of mine in Illinois, and then again while rocking in a hammock on Alabama’s Lake Martin. These pipes are as good as it gets for the pipe smoker who likes to clench and lives the opposite of a sedentary lifestyle. And though I took them with me on a 4000 mile road-trip across the United States, I probably won’t take them all the way to a raft down the Mississippi. Then again, that’s just because I have a sort of life-rule against using rafts as a means of transportation.

While I don’t think the new cobs will make me any less fond of the Eaton, the new varnished look is something I now prefer over the bare cobs for which I previously so zealously evangelized. They smoke as cool and weigh as little as the bare cobs, which in my (obviously infallible) opinion offer the best smoke money can buy at any price point.

But not every moment is one of adventure outdoors, and even the most active of us still sit down regularly for work or a break. When sitting, a slightly heavier and bigger pipe is no trouble at all, though this next pipe is only heavy when compared to the previous two. For the times where you’re at your desk writing the next Great American novel or, say, a forum post about your new favorite tobacco, the new bent Mark Twain is what you’re going to want to reach for. 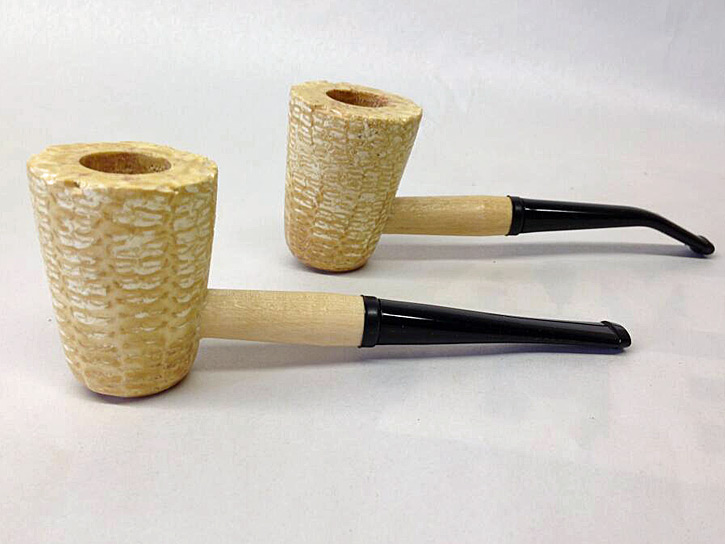 Quite different from the two mentioned above, this pipe has a Dublin shape, a plastered bowl, and comes in both straight or bent varieties. The Mark Twain is a filtered pipe and comparable in size, weight, and bowl size to the Diplomat. The Missouri Meerschaum Company said they used to make a Doublin shaped pipe back in the 1930’s and wanted to bring the shape back; this hand turned pipe is the result of those efforts. I found this pipe works great with some McClelland St. James Flake while sitting on the driveway with some bourbon watching neighbors drive past wishing they were as relaxed as me. I also reach for it as a preferred pipe while stuck answering emails, the depth and size of the bowl make for a great long-lasting smoke to take the pain out of what is otherwise work.

While I’m writing about how I love to smoke this pipe sitting down, I’m remembering Twain famously used a stand up desk. I have a great deal of respect for the man because he could write both brilliant novels and adept social commentary. It is an honor for Missouri Meerschaum just to know he chose to smoke their pipes. It seems right to me also that they should honor him with a well made, good looking pipe.

As for me and right now, I’ll hang on to this Twain and add a few more Huck Finns and Tom Sawyers to my collection. I am also thrilled that the Missouri Meerschaum Company—"an American legend"—has ushered three more American legends in to corn cob fame.

These three pipes are for sale now on Missouri Meerschaum’s website under the Hannibal Collection, (Mark Twain’s hometown). The Huck Finn and Tom Sawyer sell for $4.49 and the Mark Twain for $9.54.

*Author’s Disclaimer: While (more than) mildly infatuated with the pipes made by Missouri Meerschaum, I am neither endorsed by, nor do I work for the company. All of the above pipes were purchased with good old-fashioned plastic currency on the phone directly from Washington Missouri.

Corn Cob Pipes, The Making Of at Missouri Meerschaum