It’s All Greek To Me 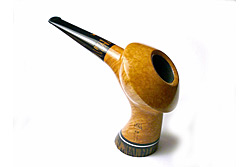 Impossible as it seems, it’s been a year since the Chicagoland International Pipe and Tobacciana Show, and the date for this year’s extravaganza is fast approaching. Last year’s show was my first, and you can read all about my experiences right here at PipesMagazine.com, as well as other exclusive reports from Chris Stout and John Winton: just navigate over to the left side of the home page and click on the Categories sub-header, Pipe Shows. To say the event was memorable is to do it great disservice; it was a life-changing experience, and I came away from it with much more than some pipes and tobaccos—I made some friendships there that will last a lifetime. It was at the show that I had the good fortune to become acquainted with two extraordinary up-and-coming talents in the pipe-carving world, namely Kostas Gourvelos and Konstantinos Anastasopoulos. 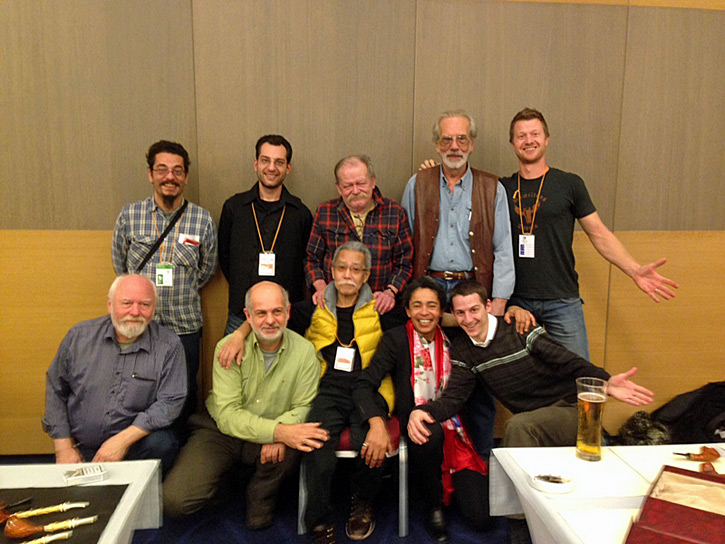 The 2013 show was their debut on the international scene from their home base of Athens, Greece. Encouraged by one of their mentors and champions to make the journey, none other than the estimable Tom Eltang, they struck out with some trepidation on their first visit to America. After all, the flight halfway around the world wasn’t cheap, and traveling in America by even the thriftiest means can add up quickly; anyone who is his own boss knows the apprehension of where the money will come from. There was no need for worry, clearly, as they were standout exhibitors amongst the hundreds of tables, and the journey proved a personal and financial success for them—so much so that they immediately began making plans for the Saint Petersburg pipe show in December, one of the biggest and most influential in the Western Hemisphere. There they again connected with many luminaries of the pipe world and cemented their reputation on the world stage, as it were. Now, in anticipation of their return to this year’s Chicagoland Show, I’d like to more fully introduce two of my favorite artisan carvers.

Kostas Gourvelos got his start in pipe carving in the usual, very roundabout way that pipe makers seem to come to the craft. A pipe smoker since his student days in the late 70s, when he was studying mechanical engineering, it would be another twenty years before he picked up his first briar block to carve. After earning his degree, he sidestepped into a technology career with his brother, Artemis Computers and Software. He did well for himself and his family, building a successful business despite the economic adversities in Greece. It was in 1998 that he had his eureka moment, when a rather pricey piece of custom furniture of his wife’s design that he’d ordered for his home proved unsatisfying; he resolved then that he could certainly do better than the carpenter who made it, and took the first steps on the journey of teaching himself woodcraft. He was a natural at it, aided by his background in engineering, and his skill grew as rapidly as his workshop. By the spring of 2005, he could finally consider himself a professional rather than a hobbyist. He had become an accomplished wood turner, creating fascinating modulations of lathe technique in jewelry, lighting design and other decorative crafts. Always a gregarious and avuncular person, Kostas truly embodies the Greek intellectual tradition with his passion for sharing knowledge, also mentoring students at his workshop. Additionally, he joined the Greek Pipe club (www.pipeclub.gr) and fully embarked on the journey of pipe making.

His personal taste in pipes is greatly influenced by the Danish masters, as they changed the paradigm of how we looked at pipes as functioning art in natural media. Even his most conceptual and groundbreaking interpretations of pipes are initiated with impeccable smoking qualities and attention to the palette of briar. Always modest and democratic, Kostas names freely his influences in the pipe world. "Being self-taught, following closely the work of several masters on the Internet, I will always remember the Danish pipe makers I have visited who helped me a lot—Eltang, Former, Ilsted, Andersen, Nanna, Manduela. Thank you Denmark, especially you Mr. Eltang!" 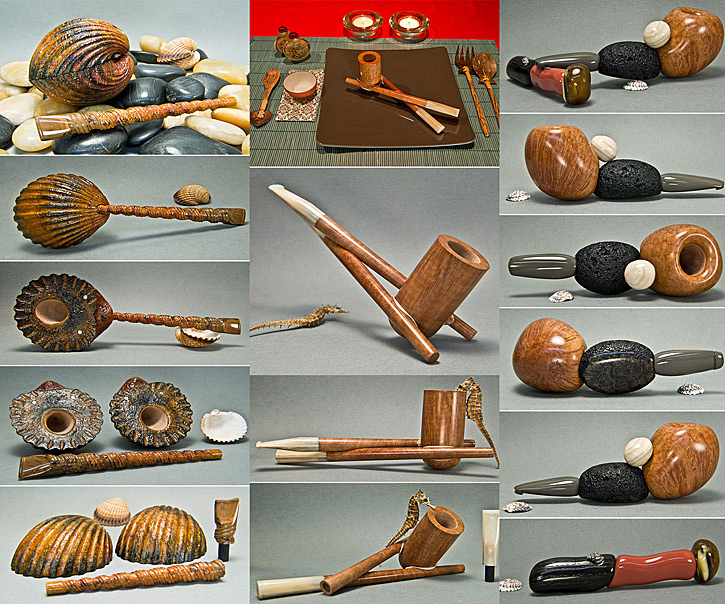 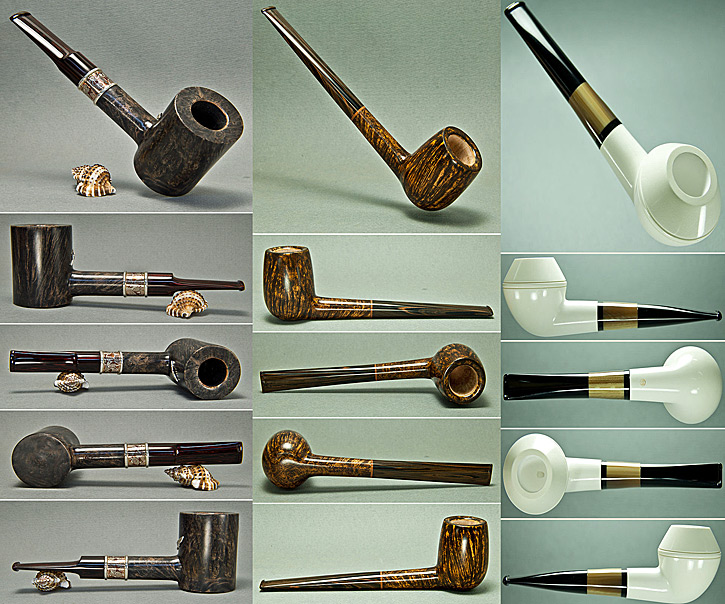 As you can see in his pipes, Kostas is a man with a lyrical soul. In our correspondence, he writes, "Hello Bill, is everything fine there, though the weather didn’t like the USA much this year?…October in Athens, and it is still warm and shiny with all the trees colourful and bright. January, and the temperature reaches 20 degrees Celsius, a calm sea and full sunshine again. Sometimes I wonder: is it this cool climate and blue sea that drives someone to be different? Colourful and bright? Even in pipe making?" and he manages to lift my spirits out of the winter doldrums. His artistic pipes certainly break molds of color and form, and yet all are made for smoking well. His draftsmanship is of course sublime with traditional shapes too, and he works as deftly in the 4-9 year old Greek briar he mainly uses as in the occasional morta or meerschaum block. He also displays mastery with the acrylic and vulcanite stem work and metal embellishments, foremost among them the filtration system of his own invention, which he calls Aspida, the Greek word for shield. 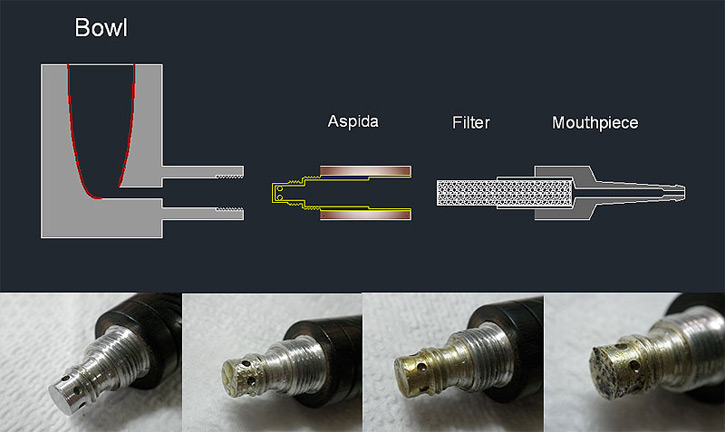 Schematic of the Aspida system; find out more about it here.

Combining the best attributes of a metal condenser to remove moisture from the stream, along with an in-line chamber for a paper, balsa, or charcoal filter, or to leave empty as a cooling chamber, the Aspida system is one of the most functional innovations that have been applied to pipes. Stingers, as we call metal condensers here in the States, have been around for quite some time, ebbing and flowing in popularity over the years. This refinement of Kostas’s, by all accounts, is a quantum improvement on the idea. An additional benefit of the system is the ability to interchange pipe stems and bowls that are Aspida-compatible. Kostas himself enjoys smoking as often as he can, and demonstrated the ease of switching from a freshly-extinguished pipe to a freshly-packed bowl, swapping them out à la the Falcon® system. 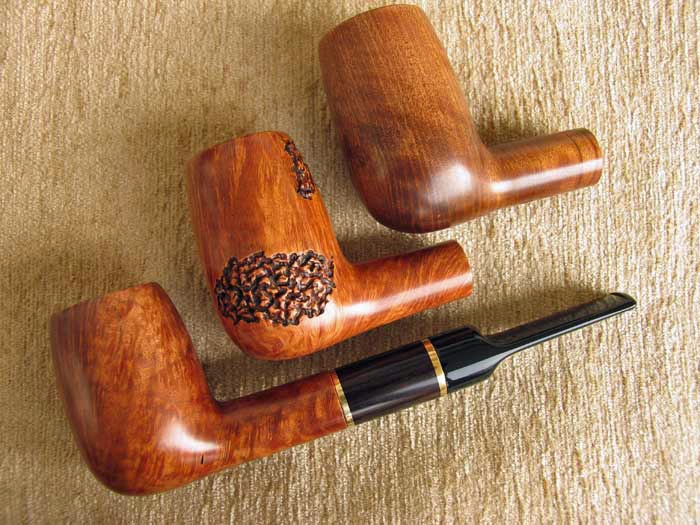 Three bowls, one stem with Aspida.

"On the return flight I had a moment of doubt about spending a bit more money than I had anticipated—then I reached to my breast pocket to have another look at the pipe I’d bought from the Greek. It was strikingly beautiful when seen against the backdrop of the clouds, its graceful form suggesting a creature in flight. It reminded me that in this pipe, this simple wooden sculpture, were now reposited all the memories of my first Chicago pipe show, all the friends I met and made there, and every future smoke I enjoy from it will rekindle that connection." This is how I concluded my Chicago report last year, and it still holds every bit as true now at home, as I light up a bowl of Cairo in this KA pipe dedicated to VaPerOs, the 1513. 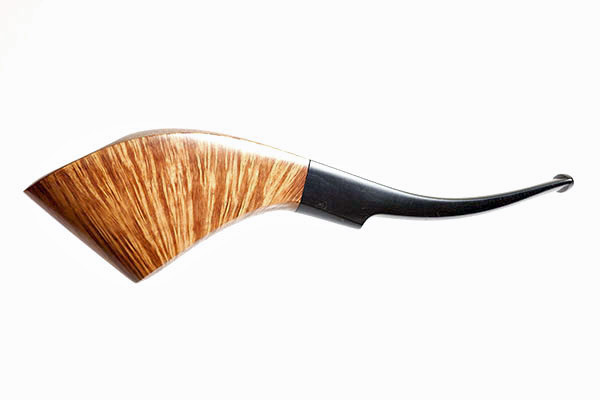 Last May I indulged my PAD with this exquisite piece from Konstantinos, and can attest to the engineering and artistic sensibilities of this young carver; buying his pipes feels like an investment in greatness. K’s artistic sensibilities align with my own a great deal: craftsmanship that’s firmly rooted in the basics, with an eye that reflects a sleek modernity of structure and contour. His background brings training in fine arts and graphic design to the table, and obviously a whole lot of natural talent. Dabbling in sculpture for a period, he connected with Kostas and became a pupil of his, learning the processes and tools of woodturning and pipe making. In the summer of 2012 the two men, mentor and student, made a pilgrimage of sorts to Denmark, to learn from the masters. There they absorbed the unquantifiable knowledge of these artisans, and were encouraged to make their way to the Chicago show by Tom Eltang, who felt they were ready to take their craft to the next level by that time. 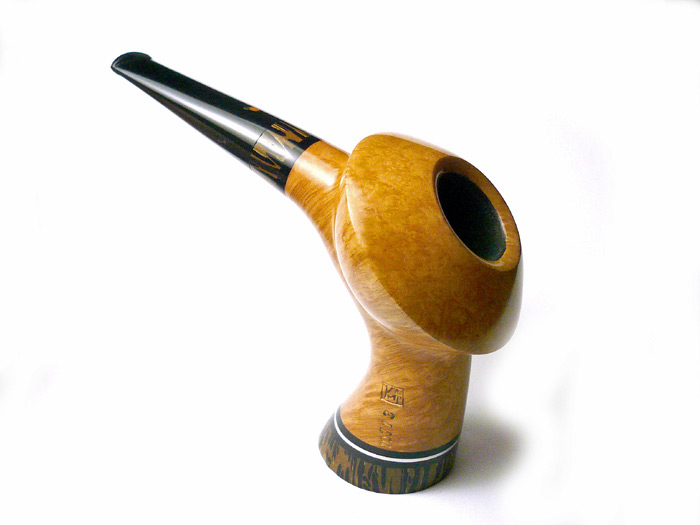 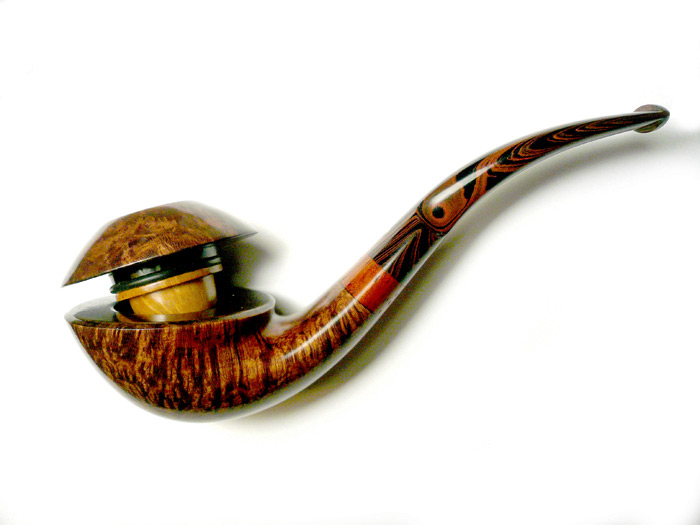 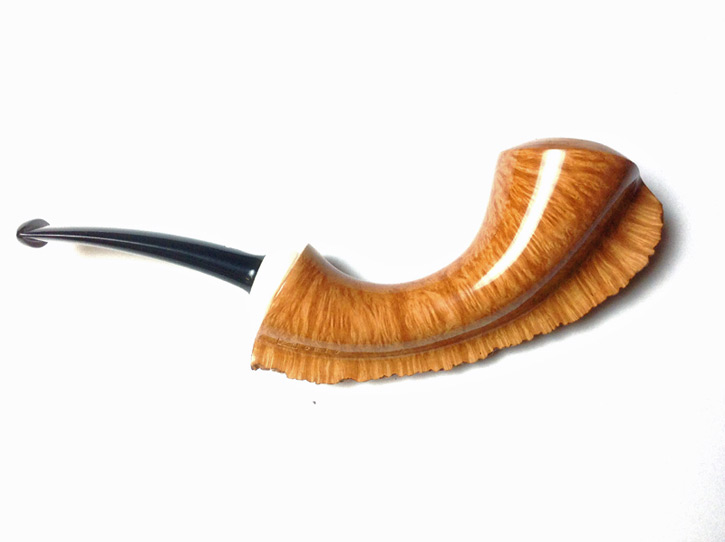 Meeting Konstantinos at the Chicago show, one couldn’t help but be struck by his enthusiasm. It was definitely a game changer for him, and importantly it revolved around the people in the community. Here he relates to me his views on making the international show circuit:

"The show in St. Petersburg was great, a very good experience for me! I made a lot of new friends, and I was also very happy to see my old friends. I very much like a phrase that my friend Tom Eltang said: "I will see you soon, somewhere in the world." That’s beautiful!

I am really very happy to have met some Russians pipe makers, and to become friends. I have always admired their work and style. Also, we had the opportunity to get together with other pipe makers that we met in Chicago and Denmark. One thing that I gained from the shows is that I realized I like to be part of the international pipe making family, and I will do my best to continue to present my work in shows and events. Also, it was very encouraging for me that other pipe makers liked my work, and accepted me and respected me as a pipe maker."

Comparing shows, though, he agrees there’s nothing like Chicago, noting that it’s "the one and only show in its category." Since last summer he’s been particularly fascinated with variations and experiments on the Rhodesian shape, as well as the blowfish, a particularly hot commodity in collecting circles these days. I’ve really enjoyed seeing the arc of artistic growth and maturity as his portfolio evolves, whether he’s pushing boundaries of perception and form, or simply executing a classic shape flawlessly. 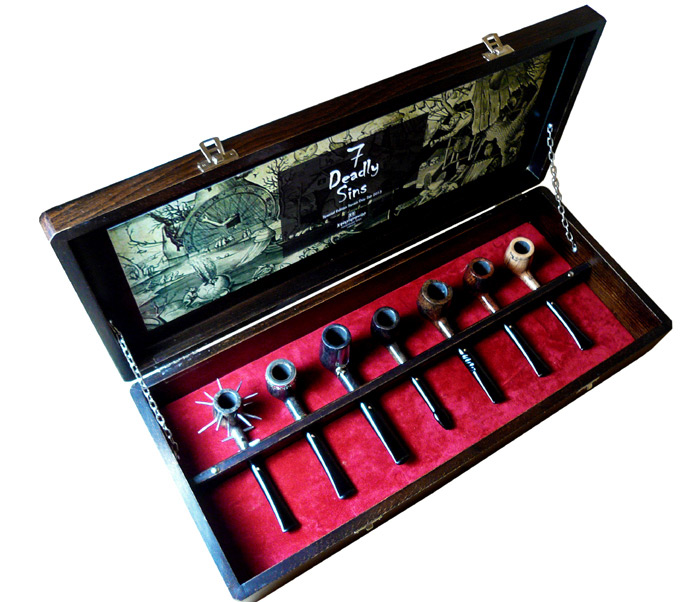 Jon and Phil of ThePipeGuys were also instant fans of his work at the 2013 show, and are now the proud US distributors of his work. Talking at length with Jon about this great young carver we’d both gravitated toward was one of those connections that come full circle.

Now all efforts are focused on putting the finishing touches for the new work they’ll be debuting at Chicago. There’s a lot of work that goes into being designer, manufacturer, and traveling salesman of your wares; then again, there’s the notion that if you love what you do, then you never have to work a day in your life. Looking at the smiles on these two, one would have to agree. 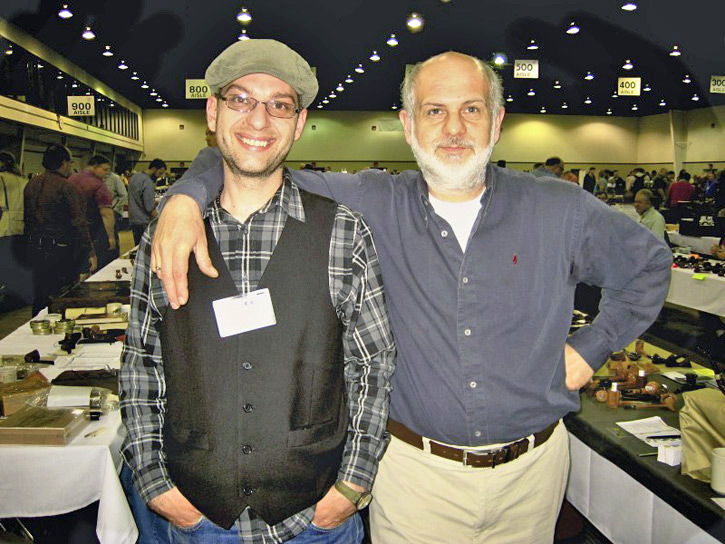 Made in the shade (of the Acropolis).