Play Misty For Me 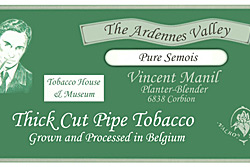 No, this won’t be a review of the 1971 Clint Eastwood film—rather, it’s a thriller of a different sort. By the time this goes to press, Vincent Manil’s ‘La Brumeuse’ will for the first time be available in the US. Semois tobacco, produced in the Ardennes Valley in Belgium and taking its name from the Semois River, is a peculiarity in the tobacco world. It was the subject of a recent NY Times article, prefaced by none other than our own Greg Pease; from this brief exposure to the American pipe smoker’s radar, fueled by forum discussions and isolated reports of its wondrous smoking qualities and singular taste, enough interest was generated for relative newcomers The Pipe Guys to seek out the gentleman mentioned in the Times article as the premiere producer of the stuff, Vincent Manil, and arrange for its import.

The Pipe Guys is a venture in well-curated pipery for the modern connoisseur, the brainchild of, well…two pipe guys, Jon Guirguis and Phil Assad. What started out as a shared enjoyment of pipes and tobaccos grew into a blog by September 2012, and within a year became a full-fledged Internet retailer. It’s a small operation run with a passion that is evident in every facet of their presentation, from the website to the remarkable customer service. My request for a phone interview, submitted through their site, was answered within thirty minutes—with a personal call from Jon, who was happy to reinforce that their business model was built around their personalized service. Jon had read the Times article himself, and like many had been intrigued not only with this curious tobacco but with the remarkable story of it as well. "This guy [Vincent Manil] and his small-batch artisanal tobacco really fit in with the whole philosophy of our business," relates Jon. Noticing the buzz that was developing in the online pipe community about the mysterious Semois, he figured it would be worth a shot to contact Vincent directly. 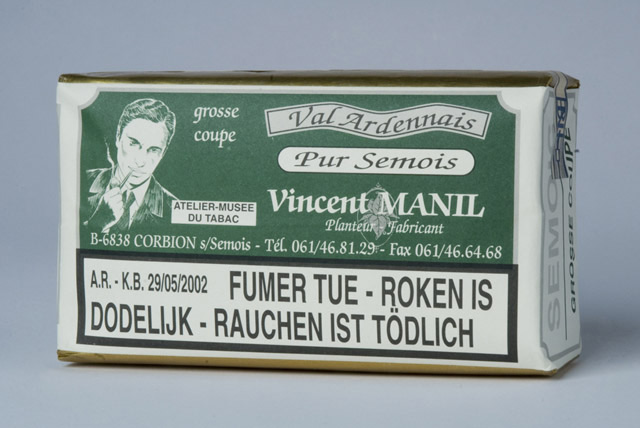 Fortune favors the bold, and the timing proved to be serendipitous for The Pipe Guys to reach out to Vincent. For years Mr. Manil had been fielding the occasional request to send his tobacco to curious customers from all over the world, but he is truly a one-man (*and his charming wife) operation, producing this marvelous concoction in his basement, and had never felt comfortable with the prospect of delving into commercial production and the vagaries and pitfalls of international shipping. But the buzz had grown to a point he couldn’t ignore, and when the connection was made it just seemed the right time, and with the right people. Speaking with Jon, it’s easy to be infected with the enthusiasm he has for pipes and tobacco. It took months of regulatory hurdles and reams of paperwork, and finally on Monday, January 20th, pre-orders for La Brumeuse begin, to be shipped by the 30th. 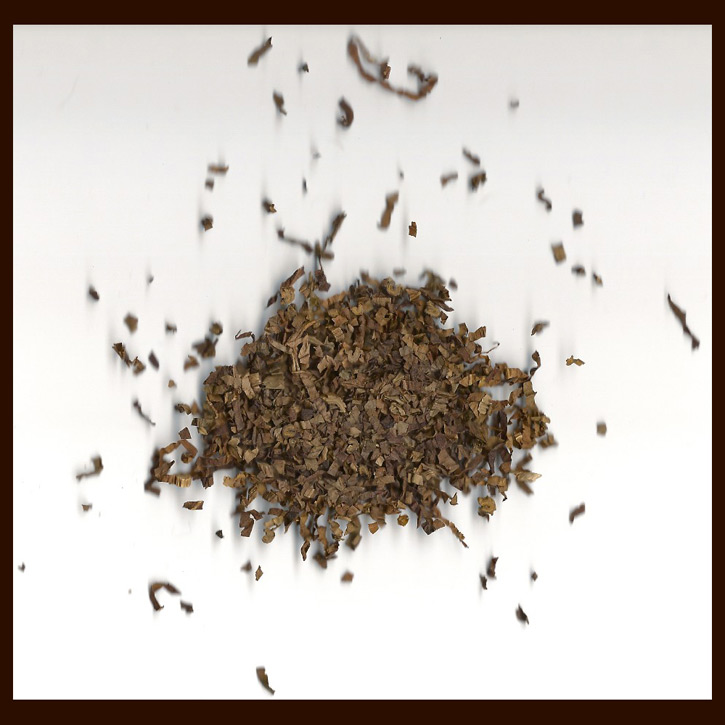 Package: It will initially be offered in 100-gram packets at the price point of $24.90, limited to one per customer. While this may seem rather precious, it’s important to note that the tobacco is presented absolutely dry—you’re not buying any water weight whatsoever; compared to an average tinned tobacco at roughly 20% RH, it’s a significantly larger portion. The dry presentation is in part due to the processing techniques employed for Semois; it’s hand-toasted in a large drum roaster, similar to coffee beans, in order to bring out its unique flavor characteristics. For some more in-depth study of the peculiarities of Semois, I’ll refer you to Arno’s excellent blog, Dutch Pipe Smoker. While it’s perfectly suitable to smoke bone dry as presented, I found it complimentary to gently hydrate it in small portions by placing it in a bail-top jar with a humidifier for a couple days. Because it is utterly additive-free, with no mold-retarding agents, it will be susceptible to unwelcome growth if not kept dry, so I’d recommend against preparing more than a serving at a time in this manner. As dry as it is, though, it exhibits its remarkable terroir-laden pungency with aplomb, and gains added dimension with a modicum of moisture added. How to even describe the aroma? It’s rich, musky, and floral, and truly has a barnyard mélange about it—the (pleasantly) fetid aroma of manure, fresh-tilled soil, moldering bales of hay, and yes, the misty fog-laden valley air for which it was named. After some days spent humidifying in the jar I get a definite carrot-cake batter aroma, replete with allspice and roasted walnut. The color of the coarse ribbon is a rather uniform olive-brown range. 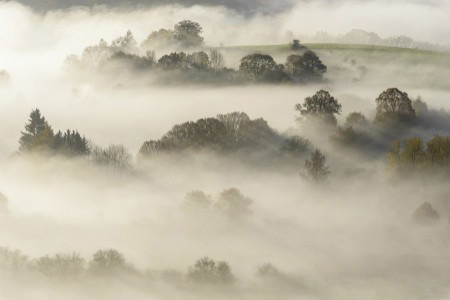 Char: From the moment flame touches leaf, it’s apparent that this is not your average tobacco. It initially offers a tart, oily flavor most akin to cloud-grown Ecuadorian-Connecticut cigar leaf; stout, yet somehow couched in velvet. When very dry it’s unlikely you’ll need a second match to smoke to the bottom of the bowl, and it should be noted to smoke quite slowly and pack a bit tighter than you might normally.

Top: Lingering behind the opening salvo of cigarishness is a panoply of flavors ranging from delicate yet definite florals like violet, lavender, and clover, to the richer vegetal range and tart top notes like fortified wine or a frothy ale. The spicy cigar-range flavors predominate, though, and set the tone with their cinnamon and cedar notes.

Mid: As the bowl progresses rather quickly to the midpoint, the flavors deepen and expand appreciably. Clear turpeny, tannic, woody notes of cedar, cask oak, piñon on a barbeque pit commingle with more salty umami tastes like sourdough pretzel, burned tomato sauce, and winter squash. Smoking as much as I could pack into a Missouri Meerschaum Danish egg out in a chilly mid-winter rain, the earthy, vegetal nature really shines through, offering a notably different smoke than when at home in my warm, dry office. I could close my eyes and imagine being in a barn, brushing down a Brabançon just in from a day in the field, the hay and barn wood and flickering oil lamp and animal musk mingling in my sinuses. This is free verse in a pipe, it’s Dylan going electric, Miles Davis recording Bitches Brew, Burroughs shuffling the manuscript to Naked Lunch like a deck of cards—it’s all over the map. 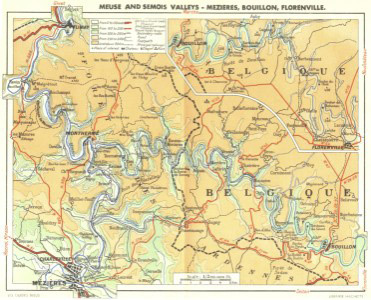 Finish: Somewhere between mid-bowl and heel my eyelids began to sweat. In the way that insanely hot peppers are felt by our bodies in ways far more complex than mere taste, the profound flavors and appreciable nicotine content of this tobacco are felt. It’s been mentioned before, and I’d be remiss not to mention it again: it will ghost a pipe readily. Repeated bowls may linger indefinitely, in fact; dedicated cobs are a great option, and it excels in them, picking up a nice sweetness from the corn and burning effortlessly in the larger bowls. The flavor stays heavily on the palate, and will shape the taste of food or other smokes well after the bowl is done. Pairing can thus be difficult—I had mixed success with beers, found it better with strong port and rum and cokes, and was completely stymied with teas, even my strongest blacks. Much more research will be needed in this area. 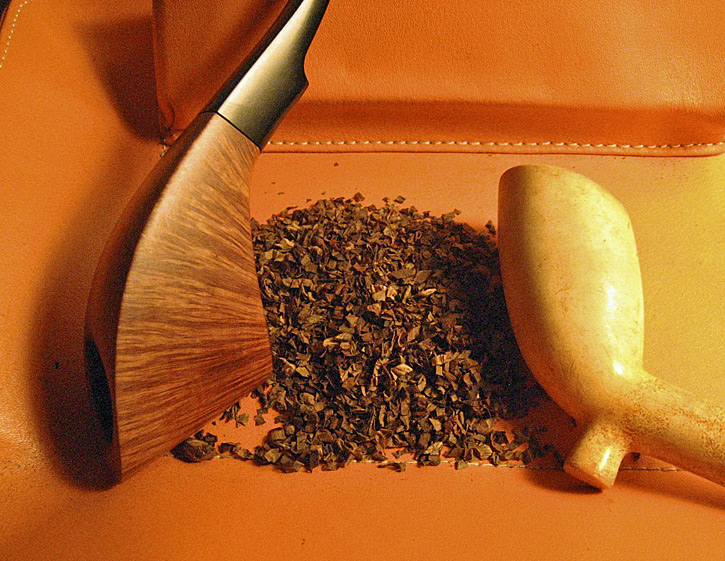 Room Note: Fire up some Semois in a crowd of cigar smokers and you’ll likely make some friends, if not converts. At the monthly pipe club meeting, too, this will pique the interest of anyone within range, particularly Lat smokers. Those unfriendly to rich, redolent clouds of pungent tobacco may complain. Much of the cigar-like range and some of the floral and earthy range translate quite directly to the secondary smoke.

The quaint packaging belies this tobacco’s ultra-boutique, handmade, one-at-a-time nature. The cut and color are intriguing, and well suited to ease of smoking. The remarkable bouquet speaks volumes as preamble to the smoke. 13 for presentation. Burning a bit quickly when fresh from the package, it still doesn’t threaten to bite, though will tend to get a bit hot in the chamber. I recommend gentle humidification for a day in advance to release even more flavor and temper the speed. 32 draw & burn points. A cultivar of burley, it’s easy on the palate heat-wise, never biting, although its intensity and mouthfeel are not to be trifled with. Pairing with beverages was a noted challenge. The sheer complexity and pungency are off the charts, and difficult to quantify. It truly does stand in a category of its own, this Semois—with limited experience in comparable Ardennes Valley leaf, I’ll give this a provisional 47 for flavor and aroma, based on its utterly unique profile. 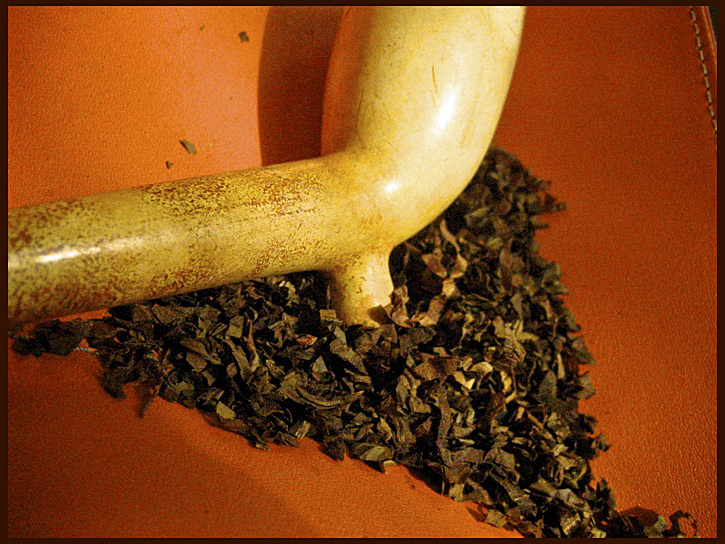 I’m to understand that La Brumeuse is the most full-flavored of Vincent’s blends; hopefully we’ll soon see additions to the import list with his milder blends as well. For those who also enjoy cigars, trying some of this is a no-brainer. Latakia aficionados will likewise find remarkable strength, depth, complexity and plenty of smoky character to wrap their palates around. If this stuff rings your bell, start stocking up as and when you can, remembering that it’s a truly small-batch boutique tobacco with limited availability, and store it carefully, noting that it’s susceptible to mold growth due to its lack of additives. 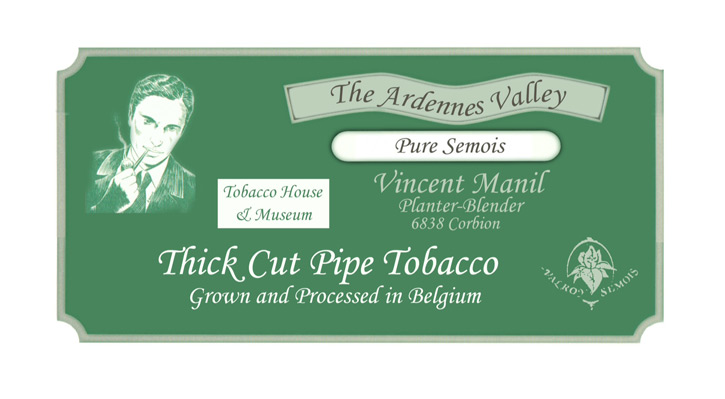