Each month, my brain fabricates a few good ideas for this column, and a lot of silly ones. Usually, one of them sticks, and things just sort of flow from there. Sometimes, though, all those thought trains get derailed by some random preoccupation that takes hold with the tenacity of a terrier. This is one of those, for what it’s worth. It started when, stimulated by reading a recent wonderful review in this very publication of my own Westminster, I just had to open a similarly aged tin.

For no discernable reasons, I’ve spent the past several months smoking mostly Virginia dominated blends, some with perique, some without, some with orientals, some with just a pinch of latakia. Those who have followed my follies for any length of time will recognize this as somewhat anomalous, as I’ve almost always been a bit of a steadfast latakia-phile, especially in the cooler months that we’ve now left behind. But, all through the autumn and winter months of 2021/22, Virginias have dominated my puffing patterns. I’ve really enjoyed the jaunt, but it was time to book passage back home, at least for a while, and that review was all the fare that was necessary for the trip. I grabbed a tin of a big, full mixture, pulled the ring, and fastened my seatbelt for the ride.

That first bowl, after so many months, was nearly transcendent. All those familiar aromas and flavors were just so comfortable, and at the same time so nostalgic. This is the stuff that pulled me to the world of the pipe all those years ago. Aromas of wood smoke and leather and exotic spices that dance in the air and on the palate, reminiscent of those early days when I first wandered into Drucquer & Sons and fell in love with pipes and tobaccos. Back then, Virginias never held my attention for more than a bowl. I’d tried many of them, of course, but again and again, after a bowl was finished, I wanted something more savory, more complex, more Balkan. Those were the blends that felt complete to me, then, that I had a deep relationship with, while the Virginas were just delightful dalyances, a bit of an amuse bouche in preparation for the main, the plat principal which would almost always follow. (And, to stretch that analogy, perhaps to its breaking point, that’s where I’d always stop; I’ve just never been much of a desert guy.)

A few days into this rediscovery, I pulled a cherished sandblasted  lovat from the rack, filled it from the tin, gently applied fire, and waited for the music to start. The first puffs were like the orchestra tuning up; all those notes from all those instruments were there, if somewhat cacophonous, but then things went sideways. At the second light, the conductor’s baton poised for the downbeat, most of the orchestra, en masse, got up from their chairs and walked off the stage.

The relationship between briar and leaf is one of those great and wonderful mysteries to me, and is something I’ve written about before. (cf. The Pipe Doesn’t Matter.) It’s a discussion that often generates more heat than light, but it’s one of those vexing things that never seems to resolve. I’ll never understand those who insist that the pipe doesn’t matter, and this is just another example of why I continue to insist that it does. More on that in a minute or two.

This particular pipe is a wonderful example that has provided many splendid smokes, always with Virginia dominated blends. It delivers a richly flavored, effortless smoke, cool and dry right to the bottom. Not this time. It didn’t taste bad or off; it simply attenuated the flavors I was expecting to the point of non-existence, delivering nothing more than warm air to a deeply disappointed palate. And, that’s the WTHH (What The Heck Happened) moment when the preoccupation mentioned in the opening paragraph began. Similar things have happened before, and as any sensible person would, I’ve just switched pipes, stayed calm, and carried on. I’m not always sensible, and this was one of those times, and this was one of the most extreme examples of this peculiar phenomenon I’ve ever experienced.

So I chose, instead, to take the opportunity to see if I could learn something, beginning by isolating the obvious things. First off, I could rule out the geometry, the so-called “engineering” of the bowl and airway. The day before, I’d smoked the same tobacco in an almost identically sized, shaped and drilled pipe, and it was superb. To rule out the possibility of “dirty shank syndrome,” I cleaned it thoroughly with several pipe cleaners and some high proof alcohol, let it rest overnight and tried again. No bueno. Visiting the cake, which I prefer quite thin anyway, I reamed it almost to the walls. Ditto. The salt and alcohol treatment similarly had no effect. Neither did a visit to the lab oven with the bowl filled with activated charcoal.

I tried drying the tobacco. No joy. Maybe it was me – some subtle change in body chemistry, or an interaction with what I’d been eating or drinking? Was my palate fatigued? Was the climate influencing things in a bad way? Another pipe, known to be more sociable with full mixtures, filled with the same tobacco quickly falsified those conjectures.

Waiting a couple more days, I filled the thing from an old tin of UK-produced Capstan blue, and it performed absolutely brilliantly, like nothing odd had ever happened. A bowl of aged Fillmore the next day was equally engaging. Then, another bowl of the aged Westminster. Nothing but an hour of puffing on hot air.

In my experience, more pipes form happy relationships with Virginias than with the fuller of the latakia mixtures. Not being much of an aromatic fan, I don’t have sufficient experience with these tobaccos to do more than speculate there, but I suspect they may behave a bit more like Virginias, or even less sensitive in this respect. This might be at least a partial cause of some of the occasional good natured arguments that turn up about things like curing methods, bowl coatings, whether or not finish has an effect on the way a pipe tastes; tobacco preference could be the catalyst that finds the smoker on one side or the other of the aisle in those debates.

But, what’s behind this? There’s a lot of stuff that pipe makers have control over. They can carefully select their wood from trusted sources, dry and season it the way they like it. The way they can control chamber and airway geometry has a significant influence on what I call the smoking dynamics of a pipe, and to some extent, can influence flavor. They can control the comfort of the smoking experience by crafting well shaped mouthpieces. They can create beautiful finishes. But briar seems to be some sort of mysterious substance placed on this planet by malevolent space aliens to confuse and vex us. Or maybe just me.

Finally, after some weeks, and dozens of bowls, it was time to return to something closer to sensibility, simply accept the fact that this pipe will forever be dedicated to Virginias, and share the story with those who haven’t already decided that I’ve lost my mind, and remain at least somewhat entertained by my occasional expositions of folly. It’s a crazy lens through which I sometimes view the pipe landscape, and I’ve scribbled all this not really to convince the reader of anything, but to convince myself, and, to that end, as I tap away, happily puffing on an excellent bowl of Virginia in this finicky briar,  I have been at least partially successful. Pipes serve better as mysteries to be enjoyed, not to be solved. 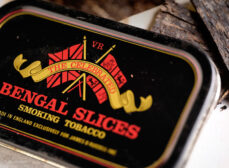 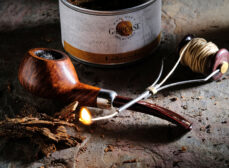