I love surprises. A couple months ago, I pulled the rings on freshly minted tins of three experimental blends. These had come out of the press just days earlier, and had no time to settle before being sliced and tinned. They were fresh and young and interesting, but not yet representative of what they would become. Of the three, one stood out to me as having the most vitality. The second was good, but lacked any truly interesting characteristics to distinguish it. The third was extremely timid out of the gate, introducing itself sotto voce, then running away from the spotlight to hide in a the shadows of a dark corner. Once I’d smoked a bowl of it, I scribbled a few notes, and put the tin aside without much further thought.

One thing I’ve learned over years of playing with tobacco is not to be hasty in forming opinions. When first put together, a blend can smell and taste quite different than it does after a few days, or even a few hours, and the changes that take place over the first month in the tin are often almost mysteriously profound. So, a few weeks later, I pulled the cap and stuck my beak in that third sample again.

That’s when the surprise came. Like a young wine that doesn’t reveal its fruit until it’s had a restful nap in the bottle and then a little air, this tobacco just needed some time to pull itself together, to breathe a little after the rigors of pressing and slicing. It had tasted somewhat flat and under-developed initially, and quite sharp around the edges, but now the fruity notes of the Virginias came forward, finding their balance with the rest of the components. It retained just a whisper of its previous sharpness, more refreshing than disagreeable.

MORE READING  The Top Half, Please

Something similar happens when any tinned tobacco is first opened, and the initial impressions it offers may not reveal what lies in wait once it’s given a little time to breathe. I’ve found this true of most young blends, but, what about those long-aged tins that that have been hiding away in the cellar for years?

To me, there’s nothing like the depth, the complexity, the almost aged cheese funkiness of the aromas rising from a freshly opened tin of vintage leaf, and I have always approached that first bowl with the enthusiasm of a kid on Christmas morning, quickly filling my pipe before the most volatile of those newly freed aroma molecules present themselves as an offering to the four winds. As much as I have always enjoyed that first bowl, though, it’s rarely shown the best of what the tobacco has to offer. It takes a little time for the tobaccos to wake up, stretch, and get themselves ready to face the world. In his somewhat controversial Disquisition for the Connoisseur, Charles Rattray wrote that a mixture improves “with keeping, and the last pipeful or two of a pound of tobacco tastes the best.” While there may be a grain of truth there, I’ve always thought it to be a bit overstated, more a shrewd businessman’s rhetoric calculated to sell tobacco than an objective assessment of the qualitative changes that take place over time.

But recently, I found myself reminiscing over the almost magical aromas I’d first experienced too many years ago in the large glass apothecary jars on the sample bar at Berkeley’s Drucquer & Sons, and have taken to putting the contents of freshly opened tins into similar but smaller jars, with tight fitting lids and ample breathing room. This seems so be something of the best of two worlds. The tobaccos have room to stretch their legs, and at the same time, the jars retain the blend’s moisture and aroma. It seems to be working pretty well. This evening, I opened a jar of well-aged Fillmore, taking in the rich aromas of the tobacco as I filled my pipe with one of the last two or three bowls it contains. Settling in to a deeply enjoyable smoke, I found myself thinking that old Charles may have been right after all. 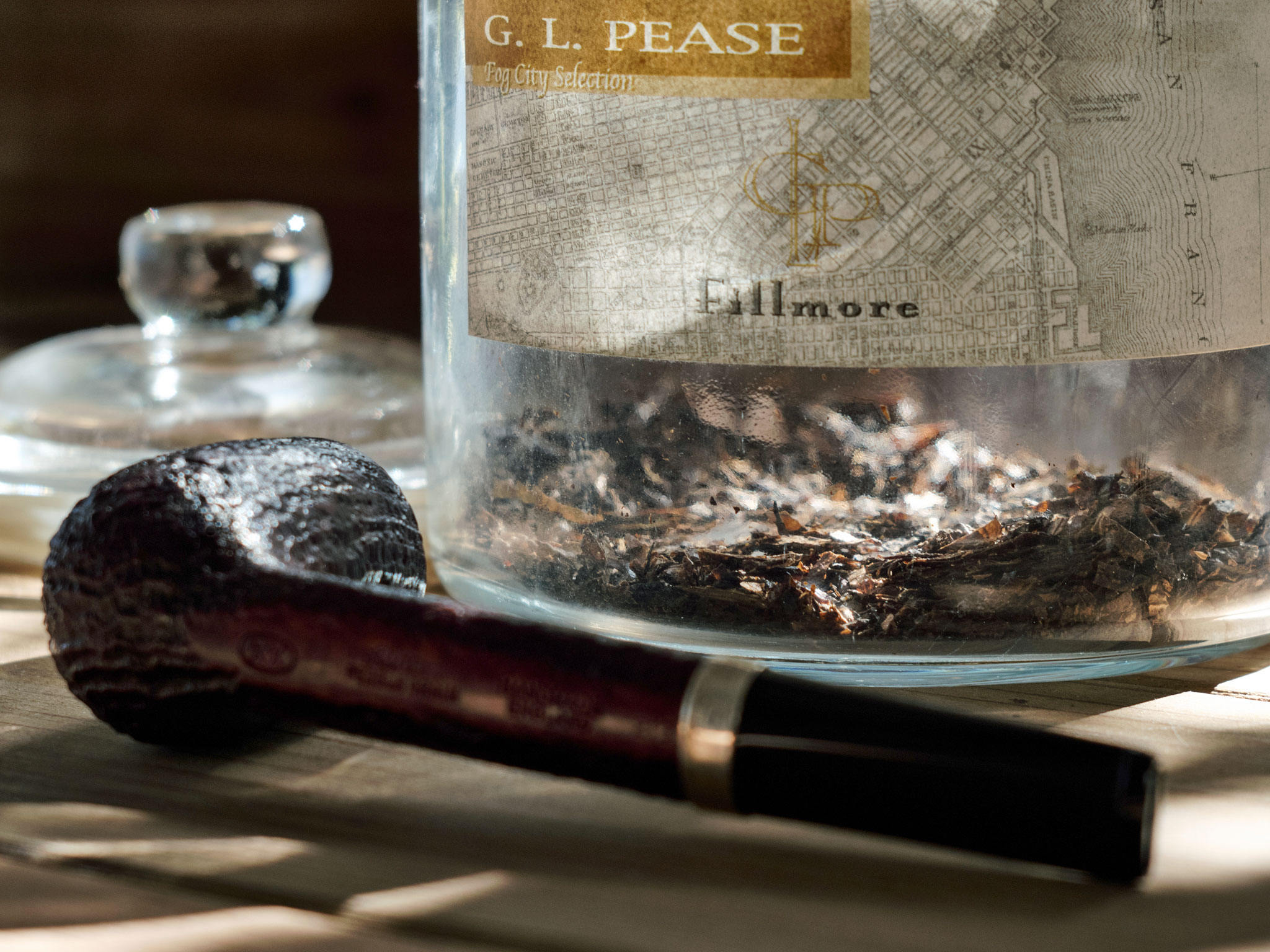 G. L. Pease
I think you may be on to something.
In a much more haphazard way, I've noticed this phenomenon in the process of drying out blends in a bowl or packed in the pipe overnight. The leaf burns better, and the taste unfolds more.
Although I am not an expert or connoisseur, my experience exactly matches Mr Pease´s
May be the oxidation process of its oils and therefore, reducing the overwhelming strength of tobacco?
my experience seems to back this up.
I agree with this %100 and those that find the first bowl of aged tobacco to taste flat and boring after cracking the tin often soon discover that if you give the tobacco time to breathe it really blooms and reveals it’s true beauty.

Great article, I really look forward to each one you put out.
The comparison with airing wine is an interesting one. Most wines, recently bottled and ones with 10 or more years of bottle age improve with decanting/airing,
even champagnes, with one caveat. You have to be careful airing/decanting very old, venerable bottles (ones over 50 years old). Very old wines will improve on
initial exposure to air, but will "collapse" after a while. Sometimes after a matter of 10-15 minutes, depending on how delicate/robust the wine was to begin with.
If opening very old tins of tobacco, the amount of air it is exposed to, or the time spent in a large jar may have an impact on the tobacco.

Please note that I am a mere student of wine, and definitely no wine expert or connoisseur, so do not quote me on this.
I’ll do this often. Opening a tin and jarring it to let it settle for a week or two. The tobacco definitely changes.
One of the blends I've experienced the most benefit with when it comes to this phenomenon is Pease's own JackKnife Plug. It definitely seems to improve after a week or so of the tin being opened, with more of the deep sweetness from the VAs becoming evident to me. Great stuff!

I'm not sure I've noticed much of a benefit with Latakia blends, though.