What Celebrity Could Spike Pipe Sales?

I don't know if Jordan is a regular pipeist, but he does enjoy cigars. That pipe looks small, but keep in mind he's a HUGE guy.
Costner with the Devil Anse role sparked a lot of interest here, but mainly cause of the pipe. He smoked one in JFK, as well.
@zekest: Obama Senior smoked a pipe. Get this pic on the networks, stat! Ok, drop Hillary, at least for guys -- she's got tremendous pull among women, even many who don't subscribe to

her politics. It's odd what moves people, not always who you'd think. People respond to a certain amount of

authority or experience as much, or sometimes more than, a jazzy young hip person. Like, Oprah would move

a lot of women. Maya Angelou would rock a lot of academics and intellectual folks. Drew Barrymore might now

have the seniority to move some younger women. Any of the living former first ladies. Maggie Smith. Judy

Dench.
For guys maybe Leno, Letterman, John Stewart or Colbert, more out of familiarity (for their audiences) than respect

per se. Any of the various generations of Saturday Night Live castes. Jerry Seinfeld. The Big Bang Theory actors,

for the nerd-hip-nonconformity folks. The Apple, Microsoft, and other silicon CEO's could pull people into piping

and play down their image as billionaire sharks (although that has a certain illusive charm, the shark image, among

many who aspire).
Lots of possibilities here, people. Probably none of these click with many of you, but there's room to explore. 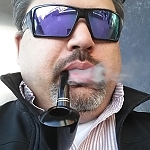 +1 for Robert Downey Jr...But only while he's got the goatee on.

+1 for George Clooney.
And 2 more offerings that are a bit off the beaten path...

- Dennis Haysbert (The Allstate guy, with that deep raspy voice)

Will Smith - looked good smoking a cigar in Independence Day, so I think he could make the change

Sean Connery - didn't he smoke a pipe in the beginning of 007 movies?

Robert Downey Jr.
Diane Keaton (Annie Hall) - the more I think about it, she would be my first choice.

Although I have to say I could totally see Zack Galifianakis smoking a pipe but I don't think he would have any impact on pipe sales.

Unfortunately, all of these names are wishful thinking although fun. If any of these well known and respected people ever took up smoking a pipe they would most likely lose fans. However, if these same celebrities were seen smoking cigarettes in the magazines (People, US or any other fan magazine) or on-line the men would probably be better off smoking a pipe.

For those that said Sean Connery

This is a woman's point of view.

It would take a plethora of celebrities all in concert to have any affect on getting people to take up the pipe. They would have to make a pipe smoking movie starring the days biggest celebs to make a dent. It took Tom Cruise and Paul Newman and the movie the Color of Money to make playing pool popular again. There was a boom because of the movie and the industry grew incredibly fast because of it. The same kind of thing would have to happen if pipes were to become more popular.

Good point Harris.
Also I have to add that as seeing how difficult it is to obtain some tobacco's would we really want it to be that much more popular?

I think Ron Paul should smoke a pipe...
Click to expand...

+1 Perique that would be awesome. I would say Sean Connery but that photo already exists, unfortunately I think if modern celebrities started pipe smoking all it would cause is a quick spike in sales and go right back to what it is at. I think it would just have a Lord of the Rings effect and while yes we did get some new permanent smokers from the movie, we also saw a quick surge in churchwardens and then its over. I'm not trying to be negative, but more realistic, plus I don't think I can picture modern celebrities with pipes.

Or, The Princess the Duchess of Cornwall, who recently gave birth to George, third in line to the British throne. She gained beaucoup media attention when in the recent past she was photographed topless!! LOL

Bradley Cooper. He's considered unconventional, but still has appeal to the young.
For girls, Alyson Hannigan would be good. And for that matter Neil Patrick Harris. lol

Yall have missed the most obvious choice.
Morgan Freeman, all he would have to do is a how to pack a pipe voice over.

Apparently Morgan Freeman also has a movie in which he is shown smoking, lighting, false lighting, and tamping pipes... The Big Bounce

I need to add Andie McDowell to my list: