My Pipe Was Always Black Inside. How Do I Know When Cake Is Formed?

Cake happens.
If you give your pie a decent break-in smoke -- fill it well full first time and carefully, slowly smoke it all the way through -- you can pretty much never worry about it again, unless/until you smoke it so much the cake becomes too heavy and you have to ream. That takes a good while, especially if you are smoking a rotation of pipes.

Right on. It just happens. And with pipes, too.

Just saw my typo. LOL
Yeah, developing cake on a "pie" would be a whole different thing.
You know what I mean though, Machado. Don't sweat it. It'll happen.

I like a bit more smoke volume than just a thin trickle, but you shouldn't have to draw hard or overheat the pipe to achieve that. You may be packing the tobacco in too tightly. I just lightly fill the pipe until the tobacco is slightly mounded up, then, using what I call the "Warren Maneuver", I put my thumb over the hole and twist a couple times, making the tobacco even with the top of the bowl. All that does is compress that little mound down, assuring that I don't pack too tightly.
Your one pipe may also have a little, teeny, tiny draft hole, which forces one to draw too hard to get smoke, which leads to hot smoking. With few exceptions, I won't smoke a pipe with a draft hole smaller than 5/32". I'd rather have a gentle wave of tobacco smoke exit the stem than a superheated jet stream rushing out to roast my tongue. It's what works for me, may not work at all for you. 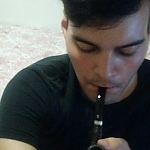 Thanks for all the tips.
@aldecaker, what about if I need to relight though? Is it common? What do I do?

Oh, it's very common. The more you get used to smoking a pipe, the less you'll have to do it. One day you'll be smoking and realize, "Wow, I'm halfway through this bowl and haven't had to relight yet!".

Relights are common, and, unless you're in a competition—where you have to smoke a bowl with only two matches—, you shouldn't worry too much about it. Of course, relighting like crazy can also burn your tongue and/or make the tobacco taste ashy, so ideally, you wanna keep relights to a minimum, but it's normal to have to relight.
Like with a cigar, don't let the flame actually touch the tobacco; rather, let the superheated air (re)ignite it. So, just hold your flame about 1/4 inch above the pipe's rim, then draw. What I've found that works is to keep drawing for a second or two even after you've taken the flame away.

What should I do to avoid relights?
Does the kind of tobacco (I'm smoking Captain Black dried in the microwave right now) have an influence?

Is the act of pressing the tobacco down to the bowl and then relighting it, good to avoid relighting again?

It's a balancing act, really. With your humidity, relights might happen more often, as the toby gets too wet to stay lit. Tamping the tobacco down should be done carefully and, above all, GENTLY, for if you compress it too much, you'll be left without oxygen pockets and then it won't burn. Tamping, as a matter of fact, is meant to help lower the cherry to the unburnt tobacco, and not to compress the chamber's contents.

I get it. For how many seconds should I hold the flame to light the tobacco?

This is important because I feel that I'm not holding the flame enough time with the matches. And when I use the jet flame, the taste sucks.
I have no pipe lighter atm.

Well over two hours of videos! And for a chap whose native tongue is Portuguese....

Indeed it is. But two hours of videos on pipe smoking - I'd rather go to the dentist.... Almost. And, yet, they are great for many.
Carry on.

machado, you complaint about your pipe making it sound as if that might be a difficulty. If it causes you to draw too hard just to keep the pipe lit on a continuous basis, it will instill bad habits. You need a pipe that is easy to smoke. I don't know if you are where you can buy a pipe in person or buy online, but Missouri Meerschaum corncob pipes are good for beginners and anyone else. Most like them quite well. I like the ones sold with acrylic stems since those stems last longer. Also, there are some inexpensive briar pipes, like Dr. Grabow Royalton, that also have arcylic stems (that Royalton series) that would be easy to learn to smoke. You can use them with or without the filter, and/or buy a 6 mm adaptor to replace the filter for a less airy draw. You can keep the price below $50 if you like. Don't fight your pipe, if it isn't doing its job.

If it's too hard, use a pick to loosen up & then repack. It just ain't worth it if you have to struggle.

I can't think of many things I'd want to do less than watch 2 hours of pipe smoking videos...
If anything, Youtube videos can be the cause of newcomers overthinking things too much. Some guys act like their complicated personal rituals are standard practice for pipe smokers. In reality, pipe smoking should be a simple act that people customize and perfect with time. No one should expect to figure out the mechanics in two or three smokes. It takes practice. Be mindful of what you are doing but relax and just change variables one at a time in order to find the best results. If you have a specific problem you can't solve on your own, then videos might be a helpful troubleshooting tool but in general I have always been better served by searching through various pipe forums for the answers.
Starting out with a low quality pipe and tobacco is the biggest mistake that many newcomers make but luckily it is can also be one of the easiest ones to solve. Machado, the pipe you are smoking sounds like it is the source of many problems so hopefully your new pipe will arrive soon.