Kickin’ It Old School with a Sazerac & Best Brown Flake 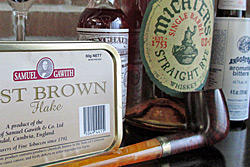 Ah, Sazerac. Honestly, does it get much better? Not only is this a delicious drink, but it appeals to the cocktail-geek in all of us by utilizing some rare ingredients and featuring an unusual yet defining method of preparation. First, a little bit of history on this beauty.

The Sarerac originated in New Orleans at the Sazerac House, formerly known as the Merchants Exchange Coffee House. The former owner of the establishment, Sewell T. Taylor, had just gone into the imported alcohol business. Among the many items that he sold was a cognac brand called Sazerac-de-Forge et Fils. The new owner of the Sazerac House made use of this cognac in the establishment’s eponymously name signature cocktail. It is claimed that the bitters used in the cocktail at the time were those being made just a little ways down the street by a druggist named Antoine Amedie Peychaud. 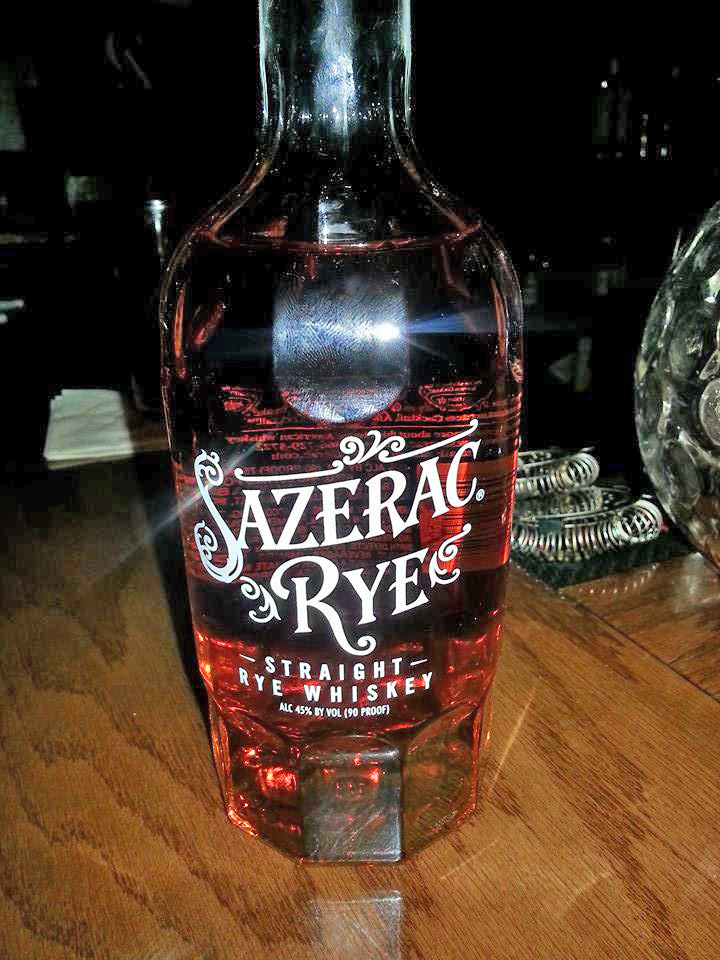 Sazerac Brand Rye is extremely rare, and hard to get. Fortunately, for the editor, it is available at The Cask & Ale, in St. Petersburg, FL, one of his main watering holes. Read more about it here.

Despite being named after the cocktail with which it was made at the time, the first published recipe for the Sazerac does not call for cognacs, but rather for whiskey. Apparently, the reason for this is actually connected to a particular insect. The Grape phylloxera, a microscopic, pale yellow sap-sucking insect, is related to the aphid and is the bane of many commercial vineyards worldwide. They fed on the roots and leaves of grapevines, resulting in deformation of the roots and gradually cut off the flow of nutrients to the rest of the plant. In the late 1800s, France’s vineyards were plagued with the pests, resulting in a two-thirds drop in total French wine production. As cognac is a form of brandy and brandy is made from wine grapes, this made acquiring the required ingredient rather difficult. The solution? Replace the called for ingredient with one closer at hand, such as rye whiskey.

MORE READING  I'll Have a Hennessy V.S Sidecar, Up with a Twist, Please

One final note. The Sazerac is sometimes referred to as America’s oldest cocktail. While I have no evidence to refute this, I find it difficult to believe, due to its incredible similarity to the Old Fashioned. I would be quite surprised if the less complex version, the Old Fashioned, came after the more complex version. But what do I know?
Now, to the good stuff. How do you make it? As with many cocktails, there are lots of different recipes with minor variations. I recommend trying them all until you find the combination perfect for you.

You’ll need two Old Fashioned glasses (or rocks or lowball, whatever vernacular you prefer), preferably one chilled and one not.

In the unchilled rocks glass, drop in the sugar cube. Clink! Add a couple drops of water to it, just enough to saturate the sugar cube. Then muddle – crush – the sugar cube with a spoon or wooden muddler. Once this is done, add in a few ice cubes and pour in the whiskey and both bitters. Stir well.

Now, take your chilled Old Fashioned glass and pour in a small splash of absinthe (there’s no real measurement here, just enough to get the job done). Then, spin and roll the glass around until the absinthe has coated the inside of the glass. Pour out (or drink) the remainder. Strain your concoction from the first glass to this one and garnish with the lemon peel. Note that this cocktail is serve straight up, no ice.

After doing my preliminary research, it was off to do the hands-on research: drinking! I stopped off at my family restaurant, Nathalie’s, where the bartender was more than happy to oblige. The cocktail was served in a cocktail glass – perplexing – and was prepared with Bullet Rye, rinsed with Lucid absinthe. The drink was, it should go without saying, delightful. I was hard pressed to notice the presence of the absinthe, but most rinses don’t give too intense a flavor. It was, however, delicious. The sugar, bitters, and little bit of water helped to give the Bullet more balance, while the subtle anise flavor left me pondering the aftertaste for quite a while, as I continued to get new flavors the longer it stayed on my tongue. 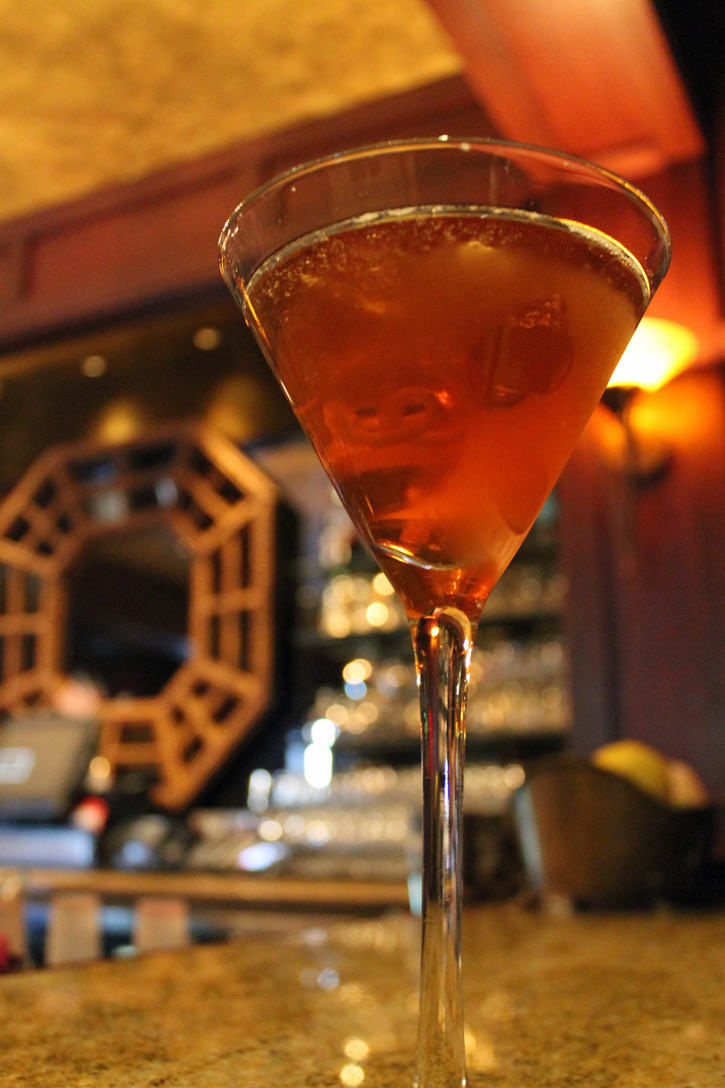 Back home, I decided to try something different. This column is all about classic cocktails, the old and the revered concoctions. I found myself in the fortunate situation of not only having homemade bitters, but also top-shelf absinthe and cognac. So, what not try the original version of the Sazerac?

I prepared this version using both Angostura and homemade bitters, while the glass was washed with Nouvelle-Orléans by Jade. Distilled in France, this is one of the highest rated absinthe available in the States. What’s more, look at its name: New Orleans! The birthplace of the Sazerac. It was too perfect to resist. The cognac was Hine Antique X.O. Fine Champagne. Yes, I splurged. 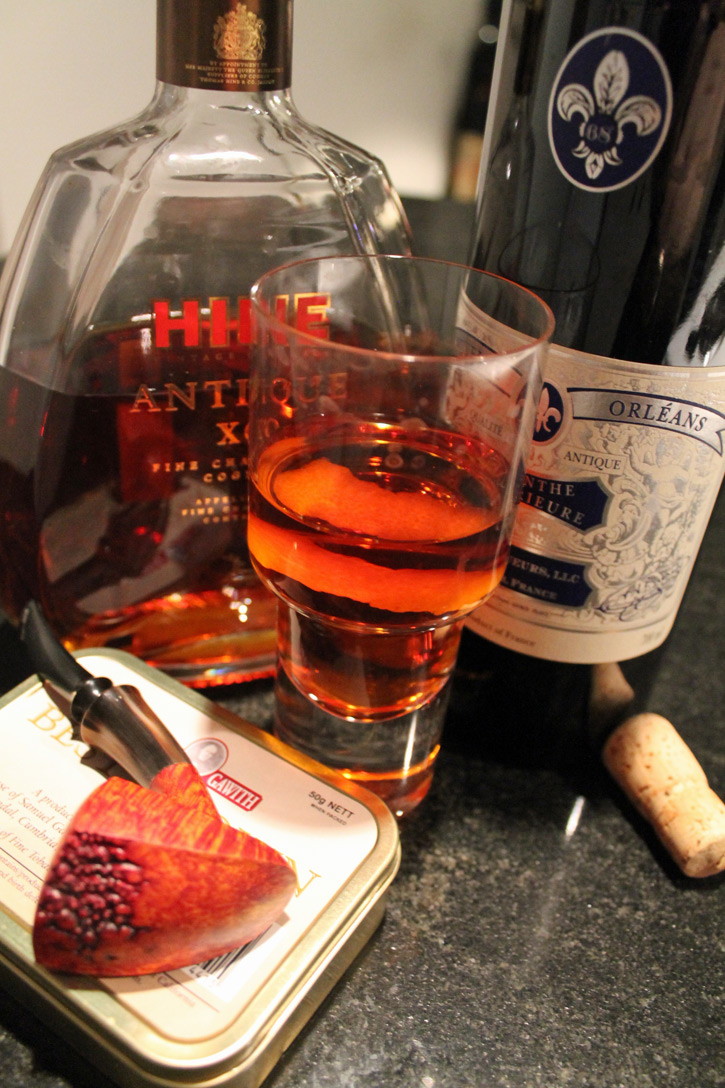 Let me tell you, though, it was worth it. Being a more subtle liquor, the cognac let the absinthe play more forward on the palate, and yet it was in no way overpowering. The cognac, with its raisin and nutmeg flavors, intermingled perfectly with the floral and herbal flavors of the absinthe. Meanwhile, the hint of lemon from the peel gave the perfect hint of brightness needed to liven the entire cocktail to the ideal balance. I can see why this version become so popular so quickly.

I decided to pair this version with Best Brown Flake out of a gorgeous little Elephant Foot by Adam Remington. This lightly sweet tobacco with its cool smoke and pleasant aroma was only improved by the sweetness of the Sazerac. A truly enchanting combination.

Perhaps the most difficult part about the review of the Sazerac is that fact that it is in so many ways the perfect cocktail. It’s simple, yet not mundane. It has a fascinating history. It has a method of preparation that makes you look like a natural mixologist. It’s really tough to screw up. Its flavor is phenomenal and would likely pair well with nearly any tobacco.

So, how do you like to prepare your Sazerac? What do you pair it with? Sound off and thanks for reading. 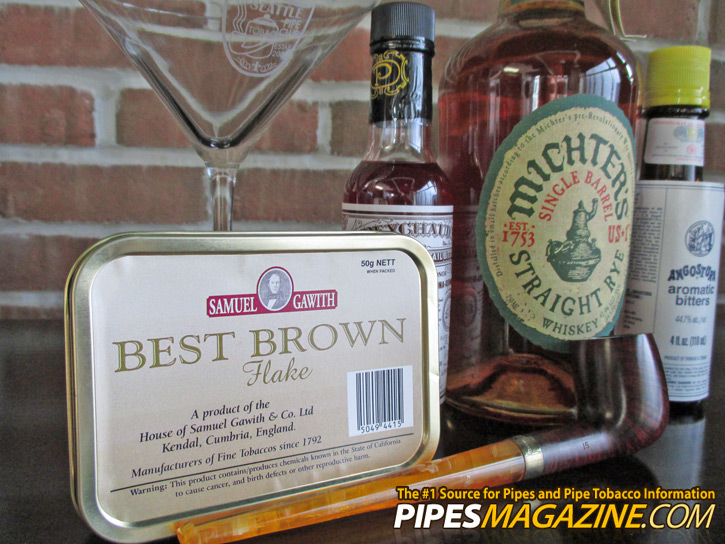 I’ll Have a Hennessy V.S Sidecar, Up with a Twist, Please