You Can Go Home Again

September is always a good time to think about what’s next. Such as the end of summer, the start of fall, and football, maybe?

There is always hope. I know, that’s too Pollyanna for most tough guy pipe smokers.

But maybe we need more hope and less reality now. Or something.

Our pipes and tobacco in the time of the coronavirus, with apologies to Nobel Laureate Gabriel García Márquez and his masterful Love in the Time of Cholera novel, can provide that relief and retreat from the grind of nonstop news.

Like the family dog, our pipes and tobacco offer that welcoming feel of loyalty, friendship, and love. It is omnipresent and unconditional.

These times remind us why we need our family, friends, and pipes.

Walking my beautiful Golden Retriever Belle the other evening, I discovered something fresh about life in these uncertain times:

Belle stopped, sat rather forcefully, and refused to budge. She was as planted as a fire hydrant. No amount of pleading and pulling worked.

Then it dawned on me: Belle wanted me to sit beside her and listen to the evening sounds rising from surrounding trees and bushes in the neighborhood.

I sat, pulled my pipe from my leather pouch, which I had filled before leaving on our evening walk together.

Belle rested and panted patiently as my struck match flashed an orange glow.

I puffed and relaxed, legs stretched out in front of me.

Belle put her head in my lap, and we listened to the night critters performing in an orchestra of nature.

It was a sublime moment, returning me to more peaceful and less stressful days.

Maybe this is a nostalgic notion, but it transported me to an age of dirt roads, mountain trails, old-timers quietly smoking their pipes, and rose-rimmed mountains at sunset.

Belle taught me once again what is essential in times of anxiety and worry: my dog, each other, our families, friends, and, most of all, our pipes and tobacco.

And, often, looking back is at times better than gazing too far forward.

And although the great Southern novelist Thomas Wolfe wrote you can’t go home again in his novel of the same name, maybe we can soothe rising storms with memories of the old homeplace.

Here family members retired to the front porch at dusk after the evening meal to reflect upon the day and the seasons.

What once worked can work again.

And, since the Pundit is looking back, contemplating the way we were, how about a trip down the memory trail with Norman Rockwell?

Surely you recall the legendary illustrator and confirmed pipe smoker?

Many old-timers, ahem, Pundit included, grew up with Norman Rockwell paintings on the covers of The Saturday Evening Post, Boy’s Life Magazine, and Boy Scouts of America Calendars.

His iconic illustrations on those publications were pure Americana, something he said he very much intended to portray.

The everyday American citizen, he said, attracted him. His art is the epitome of how, perhaps, we not only saw ourselves but how we lived our lives.

I have always admired Rockwell, not only as an artist, for indeed that is what he was, but also as a storyteller and, of course, as a pipe smoker.

The anniversary of his death 42 years ago in November is perhaps a time to remember the American artist, who lived through two world wars and personal tragedies and hard times.

I have attempted to discover what pipes and tobacco Rockwell smoked, not only to satisfy my burning curiosity but also to understand the man and the artist more fully.

In this day of correctness, it is difficult to find factual, resource-based information on pipe smokers and their favorite blends.

So, I am stuck with looking online, reading a CliffsNotes version of Rockwell’s life.

I found a mention in which Rockwell appeared in an Edgeworth Executive Mixture tobacco pouch advertising in the late 1950s. Check out Pipe Smokers Den for a quick reference.

I wasn’t smoking a pipe in the 1950s, but when I began enjoying our particular hobby in the 1960s, Edgeworth was one of my first blends, along with Sir Walter Raleigh, Prince Albert, Barking Dog, and a host of other drug store type pouch tobaccos.

Love those bygone days. Yes, they remind me of Rockwell and his art. And I continue to smoke those blends or the match for the departed mixture although not in the same volume as in my youthful pipe smoking incarnation.

In this limited examination of Rockwell’s history, the Pundit hopes to reprise somewhat one of his former passions: Pipe Smokers of the Past.

You can find some of these older efforts here on PipesMagazine.com. Before the virus, I was afforded substantial amounts of research in a branch public library.

Today, those endeavors are handcuffed by this terrible pandemic that has beset the nation and globe. So, this new pipe smokers of the past revival will be a slimmer version of older pipe personality histories.

Through all of this, I find hope in looking back, which, if you read anything about Rockwell and his art, you know that he not only peered over his shoulder at the timeworn but also loved to represent people and events more simplistically.

An all-American approach in the Pundit view.

And, he also looked to his front, as found in his sublime triple self-portrait.

This painting is just so Rockwellian. He has positioned himself sitting before a canvas, viewing himself in a mirror as he paints his own portrait.

It seems in this whimsical painting, or illustration, if you insist, that Rockwell is making fun of self-portraits since he is painting himself to look better on canvas than in the mirror.

This iconic painting appeared on the Feb. 13, 1960, issue of The Saturday Evening Post.

Many an art critic has said Rockwell was not a serious artist, per se, but was more an illustrator than an artist.

Sure, maybe the Rock was not a Matisse or a Monet, but he accurately portrayed the world and American culture around him.

Who can argue with his archetypal Thanksgiving Day meal cover on the classic magazine of the time in 1943?

The oil painting, now associated with Thanksgiving and returning home for Christmas, was part of a series of Rockwell oil paintings to depict and honor President Franklin Delano Roosevelt’s Four Freedoms Speech.

FDR’s State of the Union address to the American people in January 1941 was a prelude to America’s entry into World War II.

The speech concerned the freedoms that every citizen is entitled: freedom of speech, freedom to worship in his or her own way, freedom from want, and freedom from fear.

The Four Freedoms paintings ran on the Post’s covers in 1943. The U.S. Treasury Department collected the art and sent them on a tour of America.

Overall, the paintings reportedly earned the nation more than $132 million in government war bonds to help in the cost of waging war against the Axis Powers—Nazi Germany, Fascist Italy, and the Empire of Japan.

Of course, the iconic Turkey Day meal highlighted the “freedom of want.”

And here is the very centerpiece of this essay: Many Rockwell illustrations and paintings portray him with a pipe firmly placed between his teeth!

You will also note Rockwell depicts abundant subjects with pipes resolutely clenched in the jaw or resting in the palm of a hand.

In addition, Rockwell also painted pipe smokers of note, such as former President Gerald R. Ford, who awarded Rockwell the Presidential Medal of Freedom, the country’s highest award for people who have contributed to the nation’s culture, security, the national interest, and world peace.

And to Rockwell’s critics who say he was not a “true artist,” there is this: Many of his works have sold for millions of dollars since his death.

Well, that’s not too shabby for a fellow with a pipe in one hand and paintbrushes in the other! 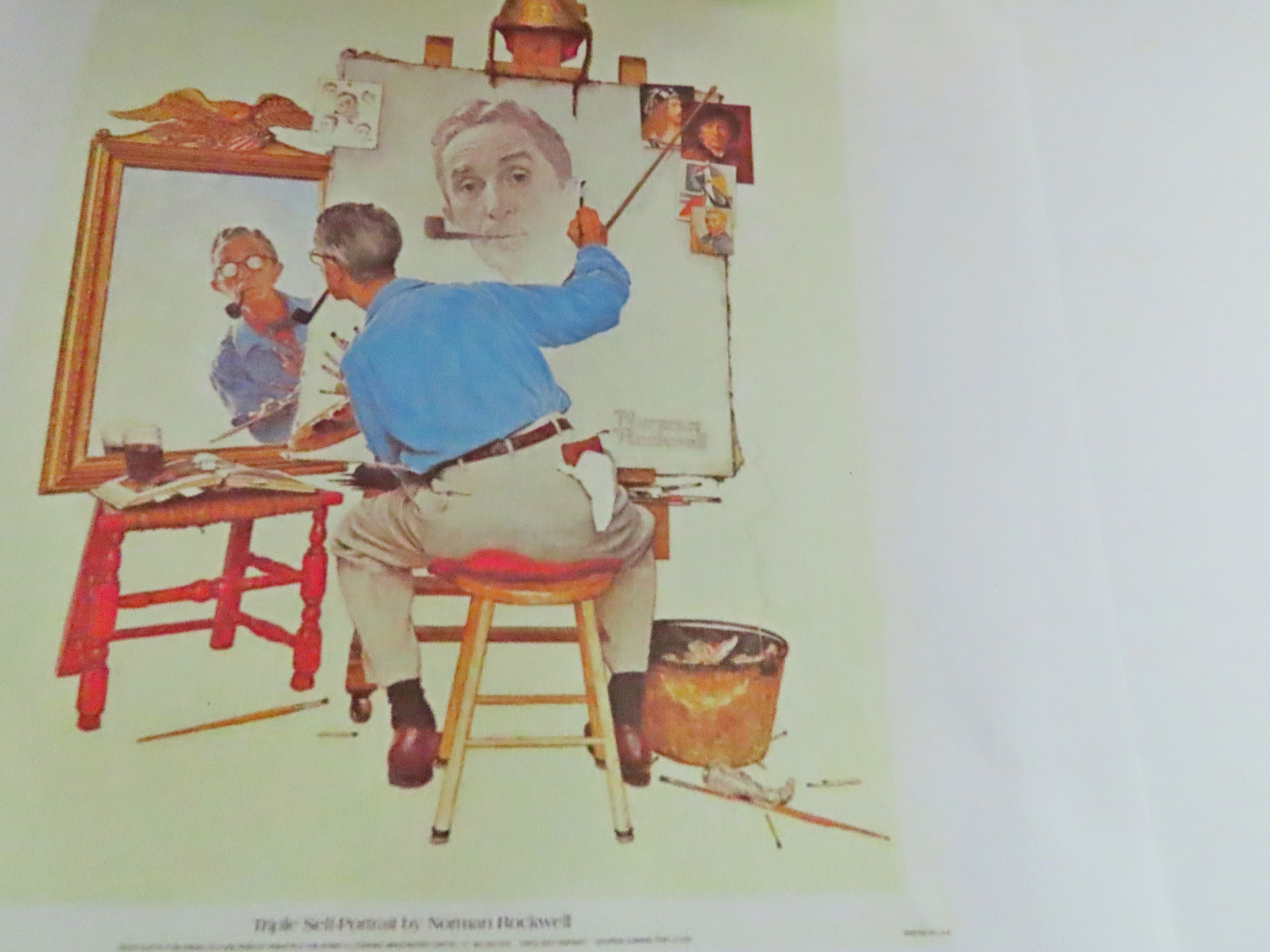