The greatest deception men suffer from their own opinions—Leonardo Da Vinci, 1452-1519

Pay attention, boys, and girls. I’m only going to say this once: In this time of 16th and 17th-century thinking, if you surmise that the sky is falling, frogs are raining down, and clouds of locust swarms have you terrified, take heart.

Here is a little advice from the Pipe Pundit Zen Meister of Pipe Philosophy:

Pipe smokers are skilled at cellaring in place. And when the world becomes too much for us, we turn to our precious cellars, stocked wide, deep, and dark. Here, wonderful aromas abound.

As the world turns, and you need a breath of freshness, a smell of new and old to boost the spirits of spring, search no wider than your cellar.

Open a tin of Virginias and old-world Latakias, sprinkled with a hint of Louisiana Perique for an uplifting fragrance, a bouquet of pleasure, the beautiful results of the blender’s art.

Aaah, the world is at peace. You are at peace.

And just now, looking out my kitchen window, what did I see?

The first bluebird of the season, sitting atop the lichen-encrusted bluebird house I purchased so many years ago it seems like a century now.

There was the female, tidying up the house, bringing in twigs for a new nest, a new time for rebirth.

Spring is here, at last, greening up the landscape. Red bud trees are bursting forth.

Can happiness be far behind?

So, in this spring of our concern and confusion, fear, and fanfare, let’s take a step back to cogitate for a moment.

Are you sheltering in place? Well, pipe smokers have practiced that for eons. We like solitude to a point until we need the comfort of other voices, ideas, and thoughts.

So, in another Pipe Pundit exercise of pipe-yoga stress-relief, take a deep breath, unwind, and light up a bowl in honor of one of our greatest modern thinkers: Albert Einstein.

You have no doubt read his sage wisdom before, but just as a refresher, he gave us this fantastic notion: “I believe that pipe smoking contributes to a somewhat calm and objective judgment in all human affairs.”

Even in today’s framework of frantic worries over global health and safety, we can still profit from Mr. E=mc2 words.

Relatively speaking, harrumph, we can light up a bowl of Revelation and meditate on a changing world.

Oh, that’s right, no more Revelation. Well, you can follow the Pundit’s advice and grab Cornell & Diehl’s Epiphany (the closest we have to Mr. E’s Revelation) and fire up a bowl at the speed of light. 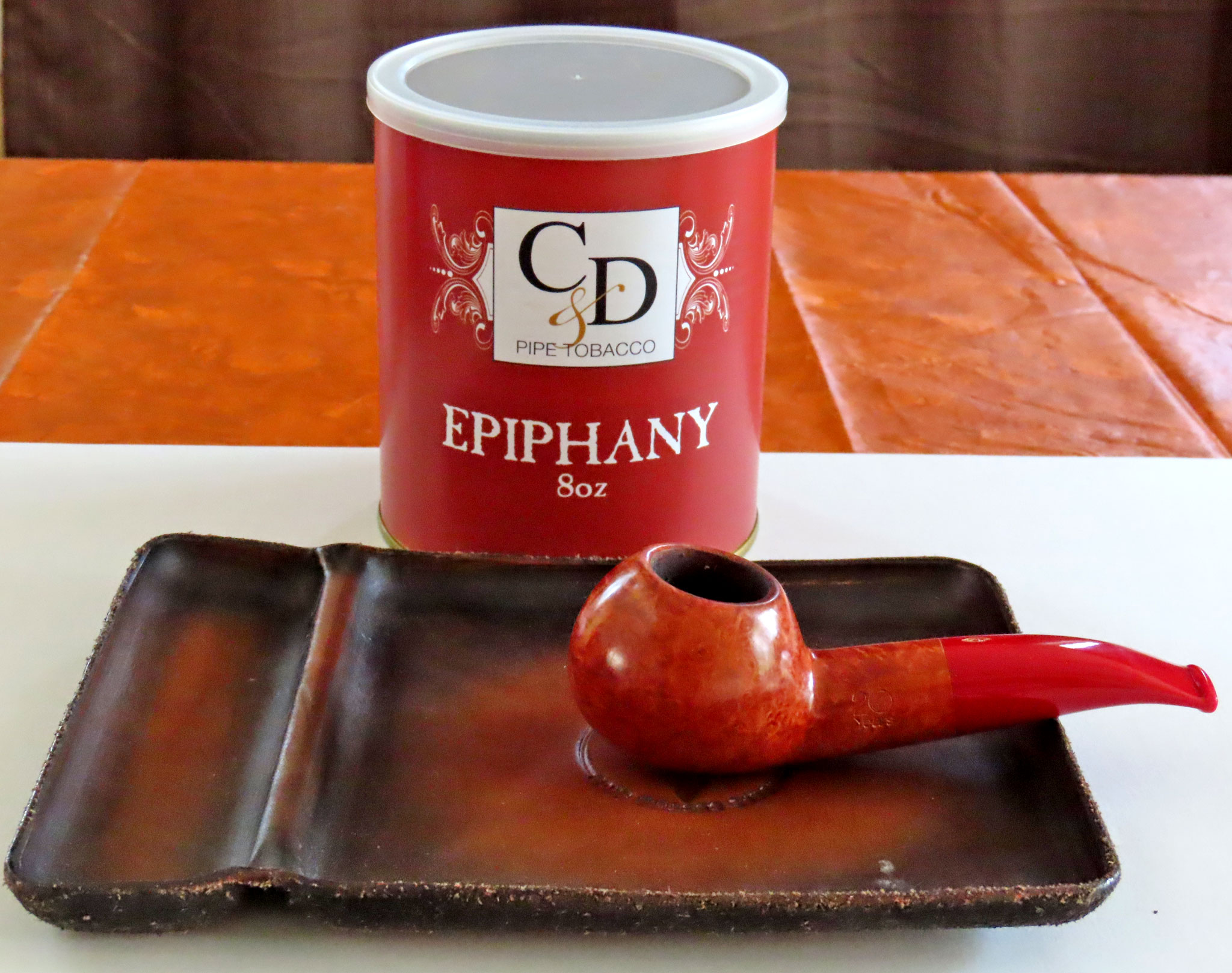 That is precisely the road taken by the Pundit with a new Savinelli Punto Oro Smooth 320 KS 20th Anniversary SmokingPipes.com addition to the collection.

And since the Pundit is fond of Epiphany for many reasons: taste, harmony, memories of a college physics professor who was said to be friends of the great Einstein, the Punto Oro was broken in with Epiphany.

There is also this: read the back of the Epiphany tin, and you find an Einsteinian like explanation of the blend:

“Reminiscent of the original Revelation, said to be the favorite of Albert Einstein, this singularity is an adroit melding of Virginias, Burleys, Latakia, and Perique in unified harmony.”

Now, the Pundit isn’t so sure about you, but that’s as close as he will come to an understanding of a unified theory of anything!

Now for a few more Pundit Thoughts in the Time of Pandemic:

A couple of quotes from a fav pipe-smoking Southern author, Thomas Wolfe, who hailed from Asheville, N.C., to kick things off: “Make your mistakes, take your chances, look silly, but keep on going. Don’t freeze up”—from You Can’t Go Home Again.

“I have to see a thing a thousand times before I see it once” also from You Can’t Go Home Again.

In these uncertain days, we pipe smokers form a sort of unified presence. As the Pundit has pointed out in the past, pipe smokers are the mind workers of the world.

We have lofty (at times) thoughts of past, present, and future. Our pipes become a safe place, where mass, time, space, speed of light, and life, slow. We see through the mists, mayhaps.

This crushing virus pandemic will pass. We have history that tells us this.

We have lived through grave outbreaks before, war being, perhaps, the deadliest of pandemics.

Plagues, locusts, frogs, war, and pestilence have savaged the soul and sapped spirits in previous generations, some dating to Black Death in the 1660s.

An excellent example of how one old sportswriter turned the mention of death and pestilence into art appeared in a 1924 newspaper story of the Four Horsemen of the Apocalypse—from one of the greatest sports ledes ever written (the Pundit’s opinion, of course).

The deadline story soared from the pen of famed sports columnist and pipe smoker Grantland Rice.

Outlined against a blue-gray October sky, the Four Horsemen rode again. In dramatic lore they are known as Famine, Pestilence, Destruction and Death. These are only aliases. Their real names are Stuhldreher, Miller, Crowley and Layden. They formed the crest of the South Bend cyclone before which another fighting Army football team was swept over the precipice at the Polo Grounds yesterday afternoon as 55,000 spectators peered down on the bewildering panorama spread on the green plain below. . . .

Yesterday the cyclone struck again as Notre Dame beat the Army, 13 to 7, with a set of backfield stars that ripped and crashed through a strong Army defense with more speed and power than the warring cadets could meet.

So, be of good cheer. Pack a bowl of your favorite tobacco blend.

Find solace in famous words spoken in another time of pain and confusion:

Relevant now as then, President Franklin Delano Roosevelt’s advice from his first inaugural address in the depth and misery of America’s Great Depression was, “The only thing we have to fear is fear itself.” 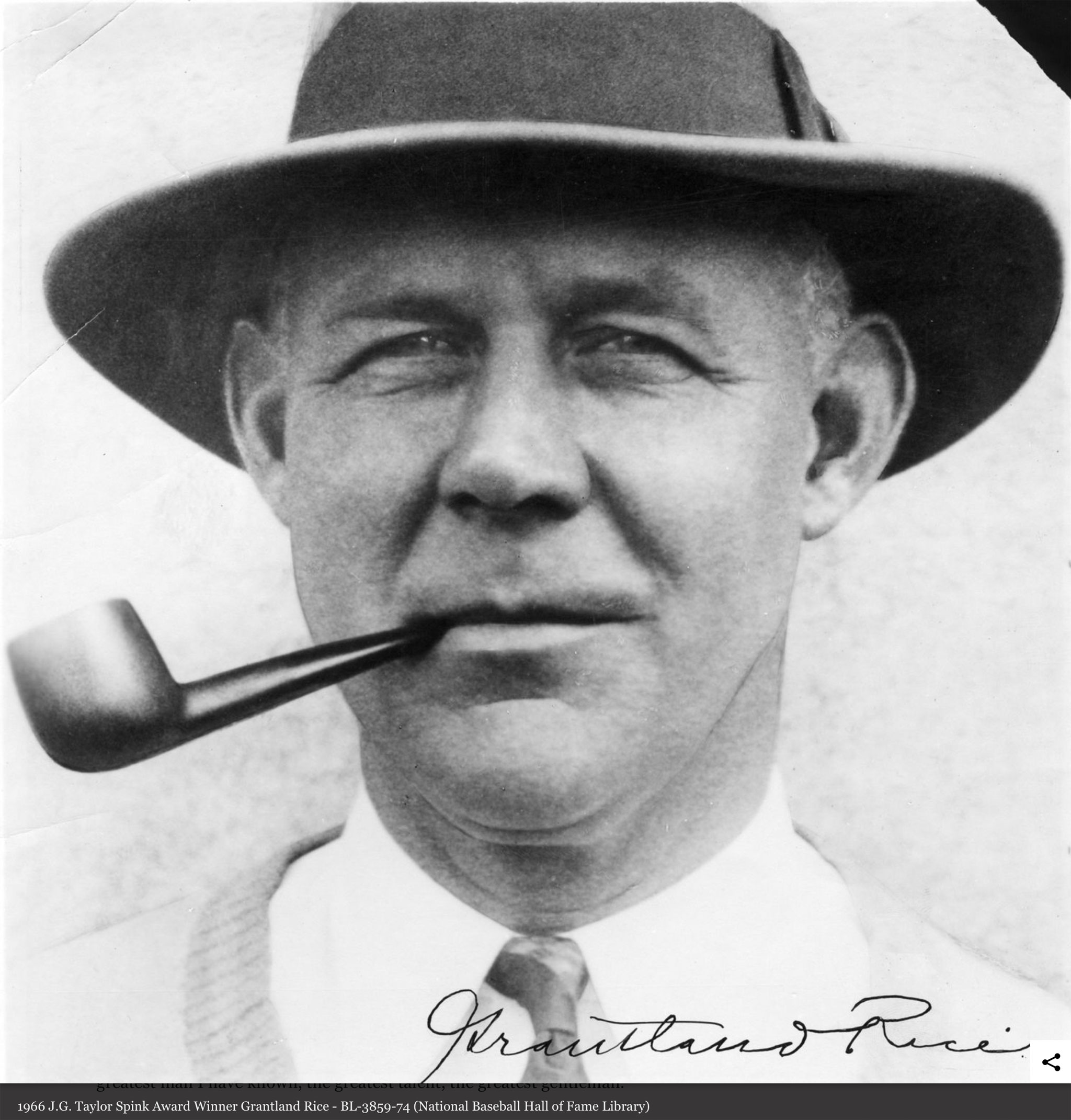