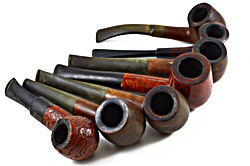 Ok, boys and girls, gather around. The Pipe Pundit is going to delve into a few thorny intricacies of the care and feeding of a pipe. This is pure Pundit pipe philosophy, just so you know.

As we all are aware, our beloved briars require, nay, must have vast quantities of opulent tobacco in its many forms. Some of us fancy tobacco-cum-ambrosia topped with spritzes of lemon meringue, coconut juice and licorice, otherwise known as aromatics.

Others in the more traditional camps prefer pure burley, full Virginia, or Perique, the voodoo queen from Louisiana. Mix Virginia, burley and perique together and it’s enough to pry loose the imagination and fill the tongue with peppery shocks. Ahhh, you gotta love those Cajun perique devils that do a Zydeco dance in the mouth and nostrils, filling you with visions of swamp things.

Now, this little essay is purely an elementary and broad overview, not intended for the real tobacco blend pro who understands the great mystique of myriad blends. Your favorite leaf type, blend or other concoction may not make it this go-round. Not to worry. The Pundit will eventually stove them, or roasting as it were, if he remembers.

Take latakia as an example. Yes, please, take latakia! You have your "too much" and you "can’t have enough" factions for the leaf. The leaf itself is said to be smoked over camel dung (I know, this is a very old wives’ tale).

So, the Pundit isn’t going there. Suffice it to say, latakia is loved, loathed, and, uh, liked.

But finally, here is one of the points of this epistle: If you are going to break in a new pipe, the codger law, tried and proven over many years, is to make those first pipefuls either pure Virginia or burley for the first several bowls.

That also holds even if later you switch to the aforementioned peaches and cream variety of tobacco blends.

Why? well, the old saw went something like this: most good blends (aros included) will have some burley or Virginia and that will pay off down the road if you decide you want to either switch from, say, a chocolaty blend to something that is Virginia-based, or burley based.

In fact, some of the best break-in tobaccos is a "codger" blend, such as Prince Albert, Carter Hall, or any straight Virginias. And, don’t overlook any of the quality full burley/Virginia blends. True, some of this ilk are not "codgers," but then codgers smoke them, too!

Now, I know there are ghost whisperers out there among you who will say, "ah ha, we got the Pundit now. You can’t switch from a deep aro back to a Virginia without having the ghost of previous bowls show up.

Au contraire, mon Cheri. I have a beloved Edwards Canadian that was purchased with economic help from some late-night freelancing. Back in the day a $40 Edwards was hard to justify when you are making only $60 a week before taxes!

And my first editor said I wasn’t worth the $60!

I could afford none of the beautiful round tins from merry-old England. So, I purchased the cheapest aro Edward’s had on its shelves in jars. To say it was thick, wet, and sweeter than a milk shake, is putting it mildly. But, it was pipe tobacco and the Canadian held up its end of the bargain. 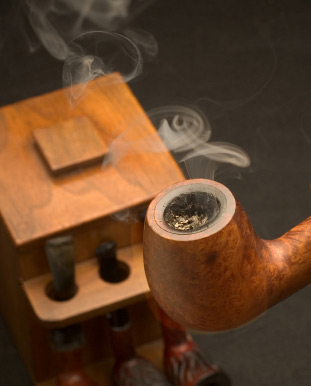 A few years later, after letting the Canadian rest, I picked it up again. Sure enough, the ghosts of yuk were there and in rare form. I needed the ghost busters.

Not being very smart, and not having the benefit of Internet pipe forum knowledge, I decided to smoke bowls of Virginia and burley in the Canadian.

Yes, it took some smoking, but that’s what an Algerian Edwardian Canadian does best.

At some point, I did note that the apparitions had faded like King Hamlet’s ghost, just out of reach, over the parapet.

MORE READING  Truer than True, a Thing or Two

So, here we are. You can try all the other concoctions of ridding a pipe of bad spirits from the past, such as the salt treatment, but run enough pure Virginia or burley through the ghosted bowl (provided you broke it in with Virginia or burley, that is) and it will eventually return.

That’s my story, and I’m sticking to it.

Now, as to filling the bowl with your favorite leaf, I believe in the tried and true, codger-tested, gravity fill. Sprinkle in, tap softly, repeat. Once the bowl is filled, push with the finger or thumb with some pressure, while at the same time puffing on the stem to test the draw of air through the bowl and leaf.

For anything that challenges my gravity-fill approach, I simply place in an old coffee bean grinder and turn ‘er on. A few blasts of that and I’m ready to gravity fill again.

I include flake tobacco in the grinder gang as well, unless I cube cut the flakes.

As for the care of your precious briars, I would like to take you back now to my Memphis days in the time of Elvis’ life.

Also living in the city then was famed historian and writer Shelby Foote, providing me opportunity to talk to him and eventually convince him to let me do an interview for publication.

Oh, the sweet joy of the man’s wonderful Mississippi drawl. You could feel the sway of moss in the magnolias and the sweet scent of the magnolia flower.

I not only admired the man, read his three-volume history of the Civil War as each book emerged from a publishing house, but I also thought he was an American treasure and should have won at least a Pulitzer, not to say a Nobel.

At the time of our interview, he was a living link to the South’s major iconic author, William Faulkner, another Mississippian.

Ahem, both William Faulkner and Shelby Foote were pipe smokers, too.

And that brings me to Shelby’s bedroom! It served as his office as well in his Tudor-style home in Memphis.

As he talked and I scribbled notes, he reached for a round, vintage green, trash can. Next thing I know, he is banging the bowl of a beautiful vintage Dunhill, about a group four, onto the insides of the can to knock out the last bits of clinging tobacco.

Unless you are Shelby Foote, that is no way to treat a Dunhill or any other pipe.

There is a proper method, however, that is much easier and safer. I read this in one of the venerable old-time flyers you could get at your local pipe store back in the day. 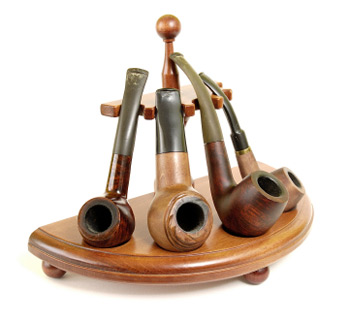 Just grab the bowl, turn it upside in your palm so the stem is pointing out from your palm. Holding bowl and stem, tap the bowl in the palm of your hand. Toss tobacco (you can send it over your shoulder if you like).

This protects the bowl and prevents the stem from snapping in half when using the Shelby Foote method.

Never, ever tap the bowl of your precious pipe on anything harder than your palm.

Bad things can happen if you attempt the Shelby Foote approach.

On this day, the Dunhill survived not too much more dinged than before the trashcan bashing.

Shelby quickly refilled the Dunhill and fired it up.

I didn’t have the heart to tell this great man that I wanted to go trashcan diving to find pieces of his priceless pipe.