The Wisdom of Pipe Talks 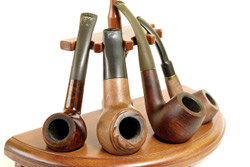 It is more difficult these days to recall just how Doc looked. He was a big man with glasses, usually resting upon his nose, no tie, rumpled pants and most of the day sockless in his shoes.
Doc was a practitioner of family medicine. Everyone just called him Doc. He delivered babies, puppies, and the best conversation you have ever heard.
Other than his wife and beautiful daughters, his loves were opera and pipes and fly fishing, most of the time in that order.
Although there were days, he told me, that his pipes sang to him like Enrico Caruso or Placido Domingo in a stirring aria.
Or a day spent on a southern trout stream with a large trout humming out his fly line like Renata Tebaldi, the Italian songbird and greatest soprano of any time.

And sitting with him on his back porch, it was easy to see why he loved his pipes so much.
Pipes gave him time to reflect, time to look back at his life and muse about mistakes and triumphs.
Pipe racks filled with vintage Dunhills, some dating to World War I and many more of World War II age, were evident testimony to his devotion.
Not often, but occasionally in a meditative mood, Doc would say, “the best part of any day is a pipe and a pint.”
I was dating one of Doc’s beautiful daughters at the time of our back porch talks.
During those moments, Doc introduced me to the joys of pipe smoking. He said a pipe always made the man, and not the other way around.
“You can tell a man of taste and good manners if he smokes a pipe. He is a contemplative soul, one not easily aroused to the latest social whimsey.”
And the man of pipes and tobacco is also well-read. By that, Doc meant if you smoked a pipe, you needed to have a good working knowledge of distinguished writers in both fiction and non-fiction.


There were quizzes on our back porch talks while waiting on his daughter. He would ask me to identify authors after he cited the lines of a novel, poem, or historical subject.
Doc especially loved Shakespeare. To my chagrin as an English major, Doc would quote a favorite Shakespearean phrase, and then ask me to give him the act, scene, and line numbers.
This was an enlightening time for me. I had no mentors to speak of in college. So, I substituted Doc for a professor on campus.
Here, under Doc’s tutelage, vast learning tumbled out into my lap. Together with pipes and porch talks, I discovered the points of leadership, how to be a gentleman, the meaning of respect for others and different approaches to problems.
He rounded off some of my rough edges. Maybe a lot of them, actually.
“There is no one right way to do a thing,” Doc often told me. “You need to look at problems from many angles. And then devise an answer, if an answer even exists.”
And then there was this: “Problems in life are opportunities in disguise.”
One of the best lessons I learned from our back porch pipe talks is that there is nothing wrong with being wrong.
“Learn from mistakes. They are the noble teachers. You will make mistakes. We all do. But the smart people learn and try not to repeat their errors.
“Over time,” Doc said, “your miscues in life will add up, and hopefully so will your knowledge.”
Under Doc’s steady hand, I also learned that not all pipe tobaccos are the same.
He was, of course, partial to Dunhill tobacco, but he wasn’t patrician about his choices.
I’ve seen him dip a pipe into a pouch of some over the counter blend he purchased at a drug store, or a can of Prince Albert straight from a country store shelf.
“You need to be flexible with tobacco,” he told me. “Growing and harvesting years are different. Some seasons, that good ground just will not produce a leaf of grandeur.
“Other years, farmers can’t get the rain they need to bring the leaf along properly.
“Patience is a virtue and learning sublime.”
I never met a man like Doc before or since. He was soft spoken, never one to rush a judgment call or a decision.
He treated everyone the same: kindly and with a smile.
I always think of Doc when I have a pipe and a pint. Why he let me share a patch of his world, I’ll never know.
So, before we leave today’s lesson, here are a few bromides from Doc I thought you might like.
He was always casual with his advice:
–Any day on a trout stream with a fly rod is the best day you’ll ever have
–It’s not how hard you work, but rather how you work
–Never give up. Victory might be closer than you think
–If you believe a thing can defeat you, it will
–Being good is easy. It takes effort to be mean
–Be pleasant and helpful. You never know when you might need both
–A kind word can last forever; harsh words are hardly ever forgotten
And Doc’s all-time favorite:
–Pipes are like people. Some are warm and friendly. Some are hard to get to know. And others just don’t fit in.
And finally, a word from antiquity:
The pipe draws wisdom from the lips of the philosopher and shuts up the mouth of the foolish; it generates a style of conversation, contemplative, thoughtful, benevolent, and unaffected–William Makepeace Thackeray
MORE READING  A Conversation With Myself
Post Views: 349