Remember the annals of a former time in the pipe world? An era when the old wood meant grabbing a beautiful smoking pipe off the rack or reaching for a basket pipe on the counter in your favorite brick-and-mortar shop and taking it home to break it in for future smokes?

Yes, the good days. Back in an era when basket pipes could mean a name-brand second, and pipes displayed on store walls were, for the most part, some of the finest wood of the day.

Maybe those years were not necessarily the best of times, but certainly not the worst of times, to hitch a ride with Dickens, as it were.

I speak of days when some ancient wood was around and more prevalent than today for our pipe-making artisans.

Sure, nowadays, ebauchons from the heart of the heath burl and the outer plateaux are dried and aged into a ripe maturity.

And it is difficult to argue with the quality of what is being produced these days by so many talented pipe artisans. These pipe makers create lovely and imaginative pipes for our pleasure and appreciation.

Indeed, I have many in my collection that are from modern-day artisans. I would not trade them for anything. And, yes, as an old friend once told me about his pipes, “they smoke.”

I also have some of the old, excellent wood, dating pre-World War II, and just after the end of that world-wrenching conflict.

Think of your grandfather, for a moment. If he was a pipe smoker, then chances are he enjoyed an aged pipe, one crusted and scarred from many a day’s work: a pipe that was tough and good, a constant companion that could be easily stashed in overall pockets and suit coats alike when it wasn’t being smoked.

I enjoy perusing estate pipes on various online retail sites. I relish reading about them and wondering if my budget can stand yet another purchase.

I love imagining the stories these pipes carry over into the generations.

All of which brings me to this remembrance of things past: A good many years ago, a friend smoked a pipe he called his “old wood.”

My friend was a novelist, a spinner of stories, a teller of tales. When you saw him, he was usually buried in thought and smoking his old wood.

His daily attire was tweed coat with leather-patched elbows, pockets stuffed with notepaper, pipes, and pencils. He was an inveterate note-taker and keen observer of life.

When I asked what he meant by “old wood,” he passed to me what I consider to be the secret of pipe smoking: “In buying a pipe, look for the old wood. The longer the wood is aged, the better it will smoke.”

How old is old, I asked?

Well, that is a stretch, perhaps, but his point was the older the briar, the longer it is aged, the better that pipe is going to perform over the years.

I began searching for long-aged briar. That is when I discovered some Algerian briar pipes that were considered “old wood.” Those pipes had been aged and cured for decades. Or so they were advertised.

I bought a couple, and they smoked as smoothly as you can imagine. I might have heard angels’ sweet voice as I smoked the first one and never turned back.

MORE READING  Keepers of the Flame

Soon after, I moved into serious collecting, quickly discovering those Algerians were sort of rare in terms of price. The old wood can be princely pricey, especially in handmade pipes.

My hunt for old wood has taken me down some odd roads. For example, I know meerschaum is not briar but compressed seashells, dating back hundreds of thousands of years.

For me, meerschaum qualifies, too, as “old wood” because it reaches into antiquity by its very presence.

Over time, I purchased many a pipe whose maker professed to age briar for at least 10 years or more. And I searched for those who aged their wood longer.

I purchased meers from artists who carved the majestic white goddess, ancient, and mysterious.

So, for me, the old wood signifies tradition and time-honored protocols in pipe smoking.

I have witnessed quite a lot in my near-on five decades with pipes. They have been my constant companion through life’s many trials, births, and deaths; good decisions and bad; dumb moves and a few dumber moves.

For the Pundit, “old wood” is reminiscent of walking down a dirt road in the backcountry. You never know what you will find around the next bend.

Question: What is better than one pipe?
Answer: Two pipes, of course.

Q: How many pipes does a pipe smoker need?
A: Silly question.

Q: What is the best pipe you have?
A: The one I am currently puffing.

Q: Is there one universal great tobacco blend?
A: No. All tobacco blends are singular achievements. Well, mostly.

Q: Mirror, mirror on the wall, who is the greatest pipe smoker of them all?
A: Silly questions. The Pipe Pundit, of course.

Q: If you could choose one tobacco blend to smoke, which would it be?
A: Next question.

Q: Are pipe smokers snobbish and cliquish?
A: Of course. We know how great our hobby is and how the pipe abides.

Q: Who is the most famous author who smoked a pipe?
A: Too many to list.

Q: Are pipes expensive?
A: No. Only tastes are expensive.

Q: Name one feature you would change about pipes and tobacco.
A: Another silly question. Nothing!

Q: Is there a right way or a wrong way to smoke a pipe?
A: Yes, often is correct. Not often enough is wrong.

Q: Is there one pipe smoker you envy?
A: Yes. Santa Claus!

Q: Is pipe smoking a tradition?
A: No. It is historic.

Q: Are pipe smokers smarter than the rest of humanity?
A: Yes. Pipe smokers are the mind workers in the world. We know how to step back and reflect. It is why we love our pipes and indulge so.

As that great pipe smoker of the past said, “Nothing so needs reforming as other people’s habits”—Mark Twain, from Pudd’ nhead Wilson. 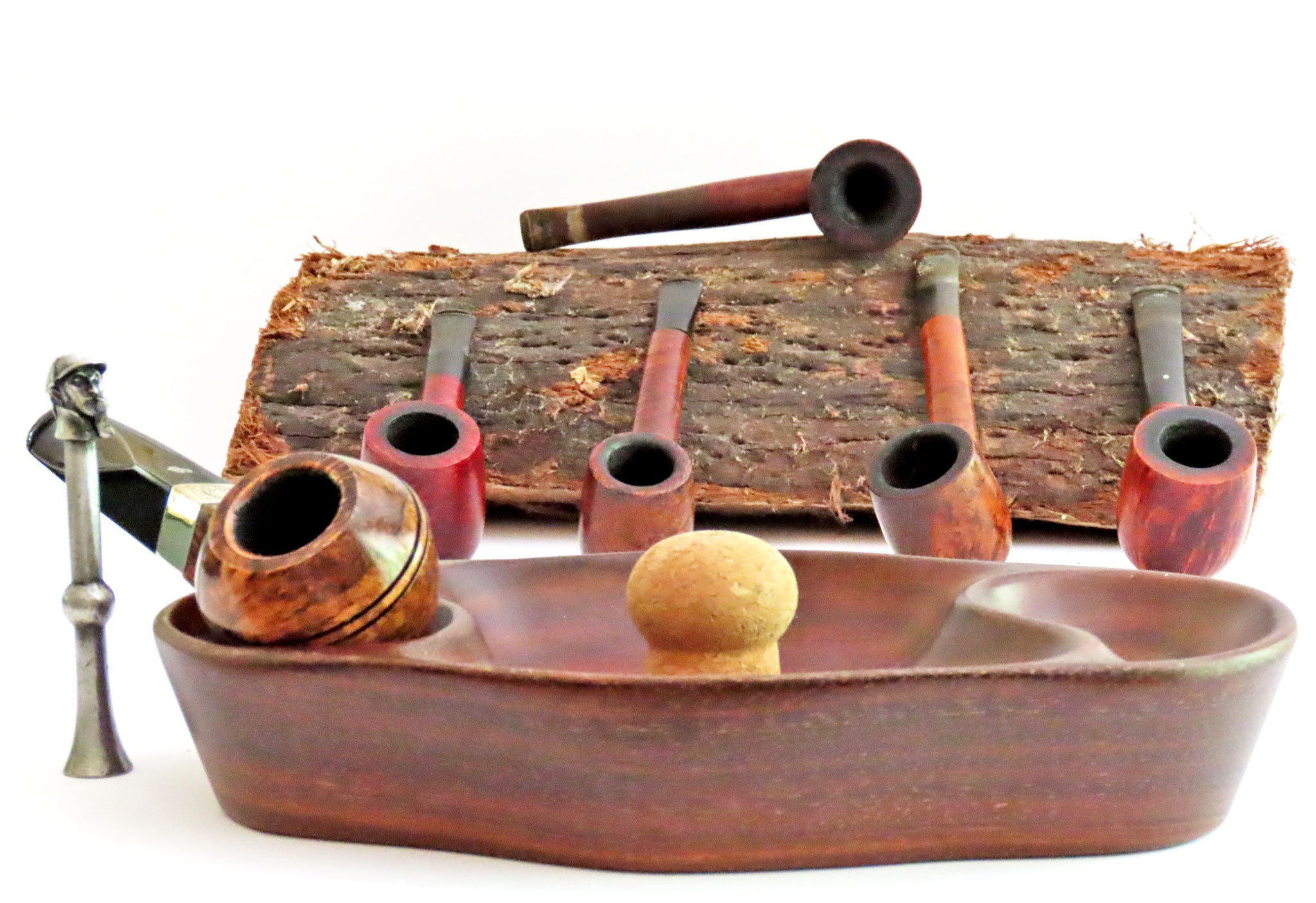 Fred Brown
What a nifty, snappy read! I disagree with this and that, but I enjoy every bit. Smoking my Kawyoodie blast straight taper-stemmed billiard. Thanks Fred.

Thanks MSO. I always check in to see what you are up to on the forum. It's my go-to for learning.

Thanks Fred. As always your articles are a breath of fresh air. It's nice to know that I can always tell my wife "Because the world's leading pipe authority Fred Brown said you can never have enough pipes or pipe tobacco"

For me, meerschaum qualifies, too, as “old wood” because it reaches into antiquity by its very presence.
Click to expand...

As some one who smokes Meerschaum 90% of the time,Thanks! Great statement...
This is a fun read! Too much of a good thing can be glorious!

Re: Mark Twain's comment on reforming other peoples' habits, I recently had a conversation with a rather overweight cousin of mine, who delivered a little scolding about my pipe; I usually try to ignore such comments, but he didn't appreciate my (mostly) tactful ripostes that non-inhaled pipe smoking once or twice a day was a pretty minimal risk compared to his consumption of multiple sodas and heavy intake of fatty foods day-to-day.
Thanks, Fred. What an enjoyable read! As a pipe smoker of 49 years I can relate to everything you say. Keep on keeping on!
The column, for me, is strikingly in need of substance. For me, to say that old wood, a topic that stirs the heart of pipe ardor, adds smoothness to the smoke or is like the unexpected, says nothing. Smooth how? Like the silken draw ascribed to several makers and their thousands-priced pipes? Getting somewhere, but I still want to know smooth in what way, and I put to you that smoothness in the end is mostly subjective. And I fail to see how the unexpected, even if found on a country road, has anything to do with the mostly vague term "smoothness" or old wood.

If you purport to tell me something about old wood, please do so.

"If you purport to tell us something about old wood please do..." indeed. Briar was and is harvested when the plant is 30-50 years old because it's big enough at that point. It was never aged en masse by any company (imagine aging the 400,000 blocks you used per year if you were a medium sized producer). Charitable reads given to advertising pamphlets claiming "50 year old briar" are responsible for this myth. Yes, it's 50 year old briar. Of course it is. It ALL is. If the author likes old pipes that's wonderful, but I've had old pipes that were stinkers (and old pipes that were great). The difference? Physics. I've got briar in my shop that's been sitting there 3 years. I'll put it up against any pipe made from any briar, from any vintage, any region. Re-mythologizing pipes is wrong-headed in my opinion.

Your last word is a truth.

Enjoyed as always. I try and smoke old wood and my small collection of 80 or so pipes reflect agreement with you. I often wonder the path my old pipes have traveled in the 60-80 years. For me, this is part of the experience.

Will
" remembrance of things past " maybe the greatest piece of literature ever written - anyways ...

SADDENS ME A BIT when i read articles based on nostalgia like this one.

a while back i spotted an old codger walking along with his pipe stopped him &amp; the conversation went on for over an hour listening to him recount days when just about every guy smoked a pipe.

i still have my uncles 1940's or 50's dunhill he gave me - its quite punky now not so much taste after family left it in a drawer for about 10 years - tried everything to revive it but reading articles like this one makes me quite sad - look at those old dunhills - not so stupid looking as some of todays pipes where everything that is as stupid as possible is "class" - dunhill didnt need screwball designs just perfect smokers -
oh yes that codger's pipe had a huge amount of carbon buildup not much space for tobacco in that bowl - this guy was about 90 years old - hope he is still around with that pipe &amp; oh all the markings were worn off &amp; he didnt remember the manufacturer - just it still smoked great after 75 years !!

TAKE CARE GUYS BE SAFE
And here I was, thinking the article was going to be about pipes made of morta.
Thanks for the article, in any event.
PipesMagazine Approved Sponsor