Get Thee Hence to Chicago 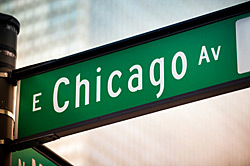 Chicagoland International Pipe & Tobacciana Show is the Super Bowl of pipe shows, the megafauna of pipes and tobacco. Count yourself fortunate, smiled upon by the tobacco gods, if you are a regular attendee. And if you have never been, get thee hence to Chicago so you can say you have been to the mountaintop, where the masters of the universe reside.

The 2015 show, sponsored by the Chicagoland Pipe Collectors Club as usual, is not only special, but also historic. This is the 20th year Chicago has demonstrated how to stage a world class event.

Missing the show is not something you want to tell your grandchildren you did.

Activities kick off April 29 at the Pheasant Run Resort and Spa in St. Charles, Ill., and the show’s big tent for around-the-clock smoking will remain open for the duration. It never closes. And, yes, you can find pipe and cigar smokers under the big tent at all hours, day and night. It’s what we do! 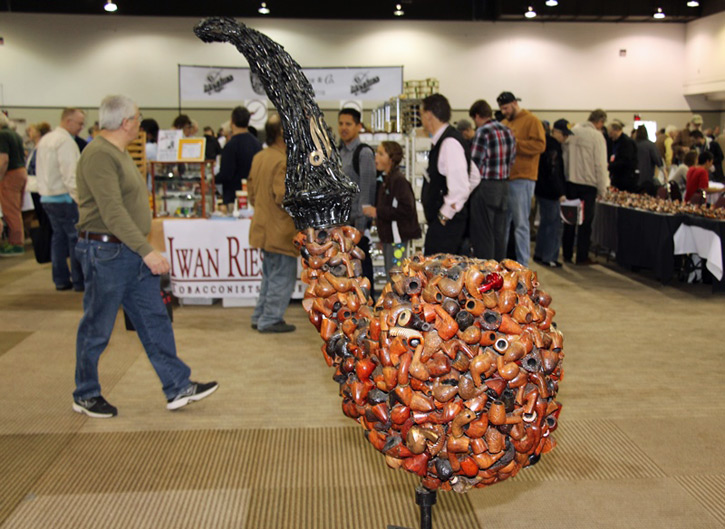 The Tent is sponsored by the notable Sutliff Tobacco Co., of Richmond, Va.

The schedule of events begins on Saturday, May 2, 10 a.m. to 5 p.m., and Sunday, May 3, 9 a.m. to 5 p.m. For those who, ahem, imbibe a bit, the Tent Bar, operated by Pheasant Run, will open during hours commensurate with local ordinances. Food is also available in the Tent.

If you thought that last year’s exhibition was spectacular, the 20th edition will make its own history.

In one of four outstanding display attractions, Judy Flayderman, from N. Flayderman & Co., Inc., of Fort Lauderdale, Fla., will bring in a stunning collection of Civil War pipes carved by the soldiers themselves over 150 years ago. The collection belonged to her father, Norman Flayderman.

In addition, Ben Rapaport, author and pipes and tobacco historian, as well as a CCPC Doctor of Pipes, will give a presentation on Civil War pipes Friday, May 1, at 2 pm. The Flayderman display is presented on behalf of the Doctors of Pipes and sponsored by a donation from SmokingPipes.com in celebration of its 15th Anniversary.

These events are just a warm-up to whet your hungry appetites for more pipe history. 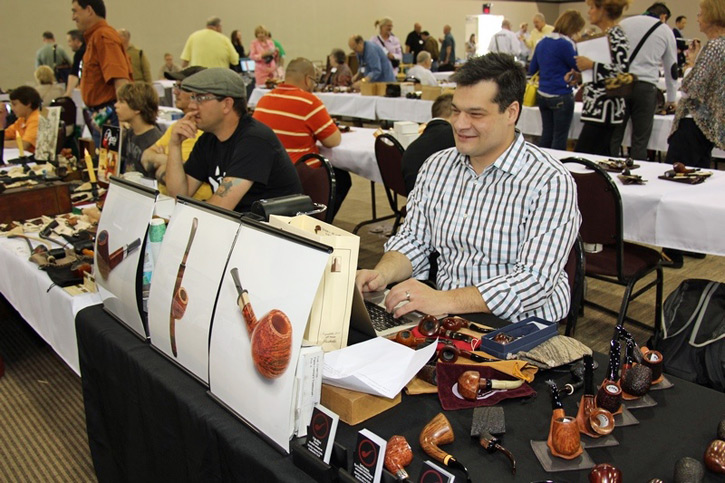 Cornelius Crans, president of the CIPC will display his collection of clay pipes from Holland and a special historical mold from Royal Goedewaagen. His presentation on clay pipes is set for 5 pm Friday.

William Hart will display pipes from his renowned collection of Von Erck Classic pipes, which is also on behalf of the Doctors of Pipes.

And finally, the Chicagoland Pipe Collectors Club will display posters from the last 19 years of the Chicagoland International Pipe & Tobacciana Show and Chicago area shows that preceded the first CPCC show in 1996.

If you attended last year, you will recall the fabulous Comoy Blue Riband pipe collection presented by Neill Archer
Roan, who also unveiled his book, "Comoy’s Blue Riband." His book and the magnificent collection of Blue Ribands were a huge hit.

This year’s offering is in keeping with the show’s heritage—which was started by the indefatigable Frank Burla, who is still collecting information on the earliest beginnings of the CPCC. 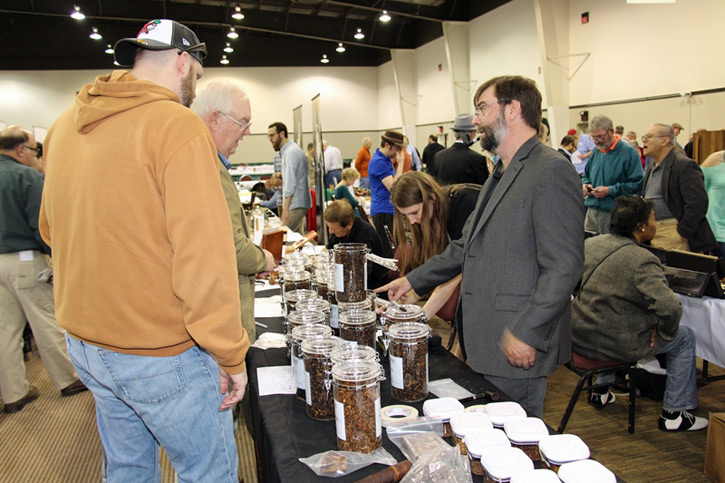 He has been talking to pipe smokers in hopes of producing a history—the Evolution of the Chicagoland Pipe Collectors Club (CPCC)—tapping into the memories of Chicago pipe smokers about the history before the 1940s, though it was not then known as the CPCC.

The birth and early childhood of the show began in Burla’s living room!

And, of course, those who know Burla have no doubt seen his spectacular collection of pipes and tobaccaiana.

Again this year, the show has attracted 300-plus vendors. This means there will be more pipes and tobacco under one roof in the Mega Center that would rival the total production of some nations.

But Chicagoland is not known as the world’s largest pipe show for nothing.

Two notable speakers are set to lecture at the show. Cornelius C.N. Crans, Chair of the Netherlands Federation of Pipe Smokers and president of the CIPC, will talk on the four centuries of clay pipe smoking in the Netherlands. The presentation will be augmented with pictures and original clay pipes from Holland. That lecture is set for Friday, May 1, at 5 p.m. in the Mega Center.

At 9 p.m. in the Hotel Atrium, Kevin Godbee, one of the more popular speakers and owner/publisher of PipesMagazine.com, will talk about a subject close to the hearts of all pipe and tobacco enthusiasts: the convergence of the Internet and the pipe smoking hobby, how both have expanded and influenced each other. The presentation will include slides, video and audio clips. 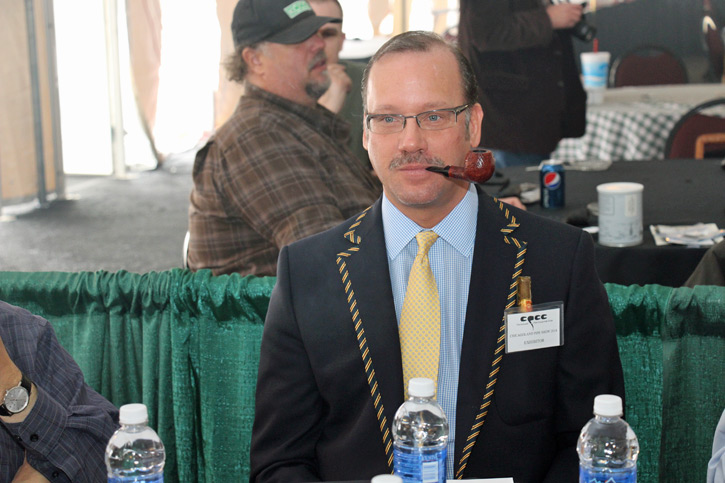 If pipe carving is your passion, this year’s event has some of the best of design and production talents to mentor would-be carvers.

And of course, the show would not be the show without the thousands of pipes, with row upon row of exhibitor tables featuring the exquisite and legendary as well as exciting new styles.

Also, just as most Chicago show veterans know, some of the most beautiful, expensive and rare pipes are sold in the hotel rooms in a kind of before-show-market. The mantra for the room shows is, "Be first, be fast and bring your wallet."

A very important component of the show is not lost on Director Craig Cobine.
Camaraderie among pipe smokers is as much a part of the pipe smoking experience as the pipe itself.

The big tent fills with pipe and cigar aficionados from around the world for the length and breadth of the show.

This year’s tobacco blending contest—better known as The Chicago Bowl, a competition which in the past has produced some excellent commercial blends—will be Virginia and Virginia/Perique. It kicks off at 9 a.m. Friday, May 1.

In this contest, some of the nation’s top tobacco blenders vie to win the "people’s choice award." Anyone can sample the blends and then vote for his or her favorite. Sutliff Tobacco is sponsoring the event. 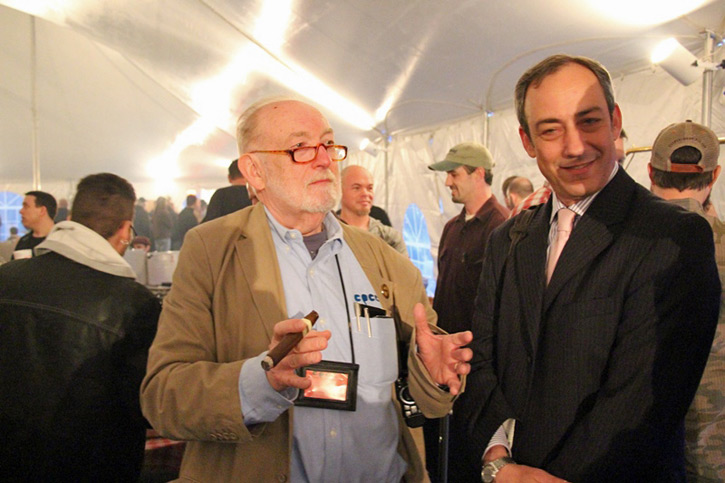 Voting on a favorite blend ends at 4 p.m. Saturday May 2.

This year the contest pipe is by Luigi Viprati, and the contest tobacco will be the Seattle Pipe Club’s new Deception Pass, blended by Joe Lankford. Cost is $50 for CPCC members and $55 for non-members.

It is recommended that you register early, since the UPCA has places for only about 100 contestants, according to show’s schedule of events.

Those with top-tier technique and a strong constitution will lead the way to the winner’s circle and grab the beautiful trophy.

To say the Chicagoland show is unique and one-of-a-kind does not completely tell the event’s story.

There are many pipe shows across the nation each year. Many good ones in fact.

But there is only one that is the world’s largest. Chicago.