Fall is a special time of year for those of us lucky enough to reside near forests. Here lush deciduous trees light up the mornings and evenings with color come October.

For those of you in warmer climes, I hear the guffaws already. “Yeah, just wait until the snow flies.” The pundit gets it.

Yes, we have snow here in the Southland, but that is a very small price to pay to look out amongst the hills shining brightly in October and November, before shedding leaves all over the place, including clogging house gutters.

Pipes and thoughts of family holidays to come brighten the Pundit’s view of the autumnal equinox.

For years I thought the equinox was a beast of burden plowing fields in far-off lands.

Lo, it is the beginning of fall, as the ripe heads of grain curve gracefully over, and heavy boughs of fruit trees lower their burden to the ground announcing that winter is near, and earth has tilted so sun and night are equals again.

What has this to do with pipes and tobacco? Well, my pipes-and-tobacco-loving friends, everything.

Sitting in a distant wood along “the road not taken” beneath trees of reds, yellows, scarlet, orange, and all shades in between, calls for a pipe.

So then let us light a bowl of Virginia with a touch of burley perhaps, or a delicious aromatic,  and permit it to waft over the fiery scene of nature’s wonderland.

Autumn’s early rap on the door puts me in mind of legendary pipe-smoking artist Norman Rockwell. His iconic fall scene of a Thanksgiving meal is as warming as an autumnal hearth.

And, naturally, the Pundit is a sucker for such events. Tell me, is there anything better than family, food, and a pipe bowl filled with your fav tobacco blend?

You pat your sated belly, light your go-to pipe, and watch the grandkids do flips and didoes in the yard or imitate snow angels!

And along comes Halloween! Ah, yes, the door-to-door tricksters in their “scary” costumes and face masks. All masquerading as children! Oh, delight!

Then, there are the annual Christmas pipe offerings, especially those from Peterson of Dublin, that magical land. This year is no exception, except it may just be exceptional.

Peterson opened its doors in 1874. German brothers, Friedrich and Heinrich Kapp set up shop on Dublin’s Grafton Street soon after landing in Dublin, Ireland’s capital, and largest city on the east coast bay at the mouth of the River Liffey.

This year Peterson reached deep into its creative juices and hatched a 2021 Christmas Pipe that just sends shivers through the soul of Pete Geeks.

The 2021 Peterson Christmas pipe offering is the company’s famous Sherlock Holmes series of pipes, crafted in those iconic shapes and finishes.

Peterson created the Sherlock Holmes collection in 1987 to honor not only author Sir Arthur Conan-Doyle, but also his mercurial “consulting detective” Sherlock Holmes.

Peterson’s web page says this about the archetypal series, “In 1987, we released a special commemorative pipe to celebrate the 100th anniversary of A Study in Scarlet, Sir Arthur Conan-Doyle’s first novel in the Sherlock Holmes universe, originally published in the November 1887 issue of Beeton’s Christmas Annual.”

MORE READING  We Will Prevail

And, you have to know, the Pundit bought one of the first Sherlock Holmes by Peterson to hit the pipe scene.

If you ramble on over to Smokingpipes.com you might catch a few of the Pete 2021 Christmas Pipes. They sold quickly at first. However, a customer service rep told me SP.com has restocked.

Out of 400 in the initial offering, only a handful was around after the second day. More have been added, they tell me. But Christmas is just around the corner, eh?

And, ahem, yes, the Pundit had to have another of what Mark Irwin in his Peterson Pipe Notes blog explains, “Each pipe comes with a Peterson leather pipe holder with the Sherlock Holmes icon, making the series more-or-less a must-have for ephemera hounds.”

Irwin’s Peterson Pipe Notes has an extraordinary history of the Holmes and Christmas pipe story. Well worth the read.

And while we are on good reading material, don’t pass up Chuck Stanion’s latest Pipe Line offerings at Smokingpipes: the 2021 Peterson Christmas Pipe and P.G. Wodehouse, both superior work!

While thinking of the great humorist Sir Pelham Grenville Wodehouse, a confirmed pipe smoker most of his life, let’s consider the English author who gave us the magnetic and persuasive manservant, Jeeves.

MORE READING  To Our Hearts and Souls

And according to the link, Interesting Literature, Wodehouse even invented some words of humor:

Gruntled. An adjective meaning ‘satisfied’ or ‘contented’, coined by Wodehouse as the antonym to ‘disgruntled’ in The Code of the Woosters (1938): ‘He spoke with a certain what-is-it in his voice, and I could see that, if not actually disgruntled, he was far from being gruntled.’

And now a Wodehouse quote of Jeeves:

I fancy it might be judicious if you were to make an exit, Sir.

Live in the sunshine, swim the sea, drink the wild air.

Fall is the right time for a pipe in the deep wood, to drink the wild air when autumn is redolent with fragrant aromas born of fiery colors.

And lastly, final guidance from Emerson, father of Transcendentalism:

It is not the length of life, but the depth.

Here’s to all pipe smokers and a great fall season, leading into the happiest of holidays.

Relax, light up a pipe and drink in the wild air of our autumnal moment. It doesn’t last long enough.

Below  – “The Pundit’s Christmas Petersons” – photo by Fred Brown 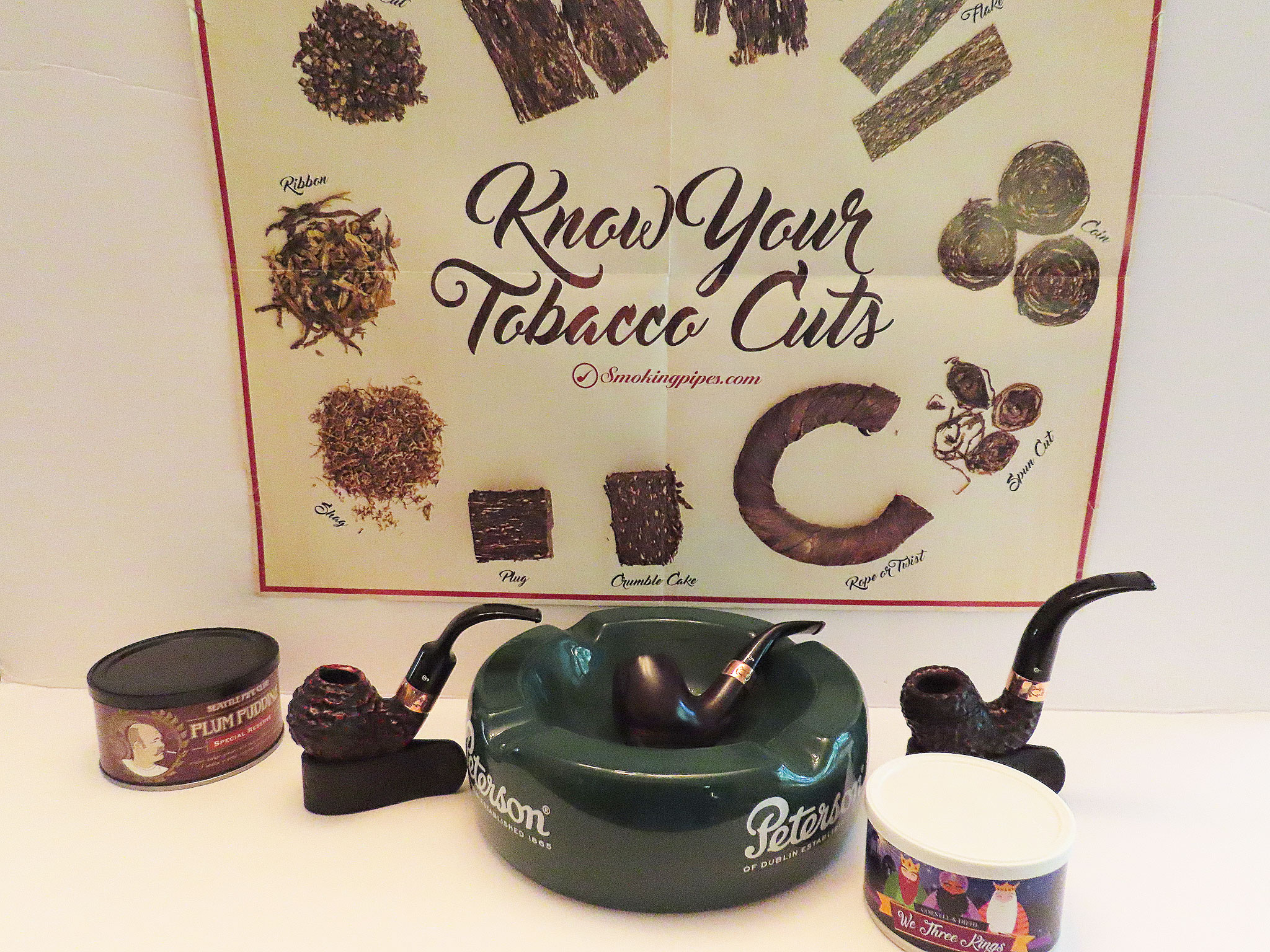