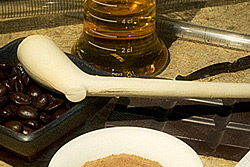 Flavoring tobacco is a polarizing subject, to say the least. Nothing will stir up snide remarks more than to bring up the subject of aromatics at a gathering of pipesters. But flavorings are much more common than many people think, and they serve a vital purpose. So let’s look at how flavors are used, how they’re added and some discussion of how they impact a blend.

It almost seems to be a badge of honor to claim not to smoke flavored blends at all; sort of like saying that one doesn’t watch TV. The truth of the matter is that very few tobaccos have no flavoring at all. Each variety of tobacco has its’ negative properties, and the right flavoring can mitigate those, to some degree. A good example is the use of Burley. This tobacco can be somewhat sour, and the amount varies depending upon the strain, where it’s grown and other factors. Also, Burley can produce a more alkaline smoke, which can lead to tongue bite. The judicious use of a sweetener will serve the purpose of addressing both problems. In this case, something like licorice or molasses will do the job.

At this point, let’s look at the two types of flavorings- casings and top dressings. Casings are applied at the earlier stages, and are often steamed into the leaf. The steam helps to open the pores and carry the added flavor into the tobacco. Virginias and Burleys are almost universally cased. Because of the process used, casings are usually water-based. After the tobacco is cased, the tobacco is dried, often by putting the leaf on a conveyor which passes through a heated chamber, reducing the overall moisture content of the tobacco to a more manageable level. The flavor of the blend is more affected by the casing than the top dressing because it penetrates the leaf. 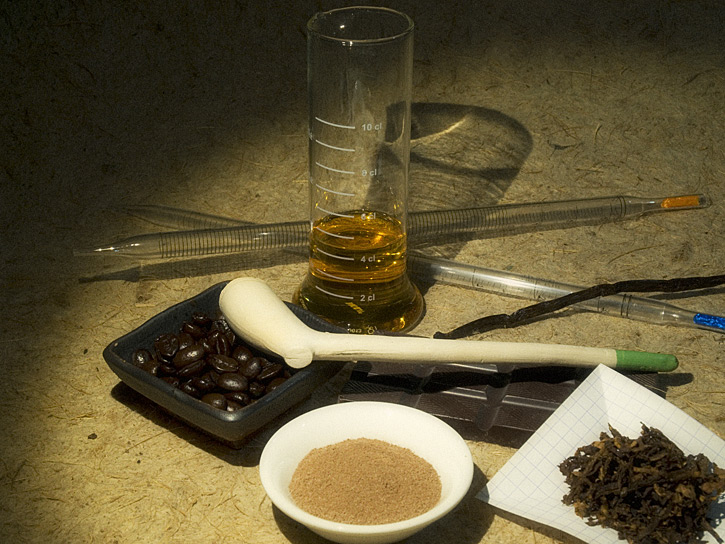 Once the mixture is dried sufficiently, top dressings are often added. This is especially true if an aromatic quality is desired. The choice of top dressings is dictated by the desired aroma. That part of the process is obvious, but how to achieve it is a bit more esoteric. To get a cherry aroma, use a cherry dressing. Seems pretty simple, doesn’t it? But when making the choice, the natural aroma of the leaf, plus whatever the casing adds has to be taken into consideration. As an example, Virginias often exhibit a hay-like aroma. If that isn’t taken into account, the end product might wind up smelling far different than was hoped for. So, oftentimes, it may take a number of different formulations before the aroma is acceptable.

Often, an additional element needs to be added to the basic flavor to achieve the desired result. When I was working on a chocolate aromatic, I found that, as in baking, a chocolate scent can’t be properly done without some vanilla.

Top dressings usually have an alcohol base, and may contain another "carrier", used to carry the flavor to the tobacco. In the case of "over-the-counter" blends, propylene glycol may be used as the carrier, as it also acts as a humectant to keep the tobacco moist during the, sometimes, long stretches of time that it sits on a shelf. The reason for using an alcohol-based flavor is to avoid having to use heat to re-dry the leaf a second time. By using this type of dressing, the flavor element can be applied, and the moisture will naturally “flash” off in about 24 hours leaving the tobacco at a more normal humidity level.

That brings us to another topic- the difference between taste and flavor. Taste comes from the sensations received by the taste buds in reaction to whatever comes in contact with them, and are generally broken down into salty, sweet, sour, bitter and umami. But taste, in and of itself, is a fairly muted sense. When it’s combined with the sense of smell (aroma), it becomes what we call flavor. To understand this, just think about what food tastes like when you have a head cold. That’s why aroma is an important part of pipe tobacco.

To see the effect, let’s look at a tobacco like Lane’s 1-Q. It’s amazingly popular, and has a very pleasant aroma, but the flavor isn’t overly sweet and is fairly mellow because the basic taste of the tobaccos is mild, plus, the aroma isn’t too pronounced. Indeed, it would be difficult for most people to identify the flavoring used by the taste, but can definitely detect vanilla in the aroma. Contrast that to Cornell & Diehl’s Autumn Evening. The maple/vanilla flavors are very compatible with the base red Virginia tobacco flavor, and the aroma is so noticeable, that this is one of the rare aromatics in which the added flavor is readily noticeable to the taste. 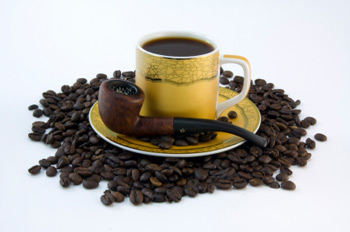 To move in a different direction, Virginias, with their natural sugar content, can make the smoker often think that they’ve been topped, even when no dressing has been applied. This is especially true in well-aged tins, which become noticeably sweeter. I smoked a ten year-old tin of McClelland’s Christmas Cheer that had become so sweet that the flavor reminded me of English toffee rather than tobacco.

The last point regards heavily topped blends that have a strong aroma, but a very light flavor. This is a common topic among people who are disappointed with an aromatic that fills the room with a singular scent, but doesn’t appear to translate to taste. Our olfactory sense quickly becomes accustomed to aromas (why do guests smell your dog when you don’t?), but our taste takes much longer to tail off. So, a blend will have a definite hint of flavor at first, but it fades fairly soon.

That makes people wonder why a flavored cigar will have a very noticeable flavor that lasts through the entire smoke, when the same isn’t true of a pipe tobacco. The reason is simple- in a flavored cigar, the dressing is applied to the wrapper leaf, so one’s tongue is in direct contact with the flavoring agent the entire time, but the taste buds never come in direct contact with the leaf with a pipe.

There’s a lot more to this subject than what I’ve covered here, but I hope it’s been enough to give you a better understanding of the process and purpose.

Don’t Think of a Purple Giraffe