Oh, The Things We’ll Do for Pipe Tobacco 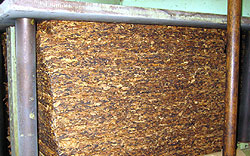 I’m sure that some people think that pipe tobaccos are made by workers weighing out “some of this and a little of that”, mixing it up and putting it in bags or tins, but there are a number of processes that may be used in the manufacture of a blend that the average pipe smoker might not even be aware of, so here’s a look at some of the commonly used procedures involved.
Pressure– Putting tobacco under pressure has long been one of the most common methods of changing the flavor and burning characteristics of pipe tobacco. When pressure is applied, it accelerates the marrying of flavors and may also deepen and enrich the taste due to physical and chemical changes that occur. There are a number of ways that pressure is used, such as:

Bulk storage– When bales of raw leaf are stacked for storage, the weight of bale upon bale will help the tobacco to become more homogeneous. This is why cigar leaf is most often stored in this manner- to help make the flavor more consistent over time.

Direct pressure– This is how flakes, cakes and plugs are made. In the case of flakes and plugs, raw leaf (with the main stem or “rib” removed, but not always) is layered, sometimes in a very specific order, in a mold, with a machine applying pressure to the tobacco, which eventually changes in flavor and appearance, coming out as a slab. In the case of flakes, the slab is then sliced for packaging, whereas the plugs are normally shipped uncut, allowing the smoker to prepare it whatever way he or she prefers. Another presentation option for flakes is to partially break up the individual slices, so no preparation on the part of the smoker is necessary. When processed this way, the tobacco is referred to as a broken flake.

Cakes use a similar method, but are typically made with cut tobacco. The reason for using this style is that there can be more marriage of flavor by co-mingling the different components, whereas the plug method helps to layer the flavors in a specific order. Cakes also may be pre-cut, or packaged as a slab.
Cavendish– Although this term has become vague in recent years, it used to refer to a specific method of processing tobacco. Usually, the tobacco was cased (more on this later), sometimes heated and pressed for a period of days or weeks. In some instances, heat would continue to be applied while the tobacco remained under pressure. Most of the time, this was done to more completely imbue the tobacco with the flavorings added, but in some cases, the flavors were minimal and just there to eliminate negative characteristics of the leaf. Then the slabs are sliced and thoroughly tumbled to break the tobacco up into a short ribbon cut.
Spun or roll cut– This starts out by putting cut tobacco in a tube and putting it under direct pressure. When the rod of pressed tobacco is removed from the tube, it is then wrapped with other tobaccos. Then the end product is sliced into disks, usually referred to as coins, for easy handling by the consumer. The coins normally have a core that is visually different than the outer layers.

Twists or ropes– In this method, leaves are layered and then twisted tightly to mature the tobacco. That’s why many ropes and twists tend to be rather strong in flavor and nicotine content. The end user then slices coins for loading into pipes, or cuts thicker chunks for chewing.
Perique processing– The leaves, in this case, are packed in barrels, and a jackscrew puts enough pressure on the tobacco to burst cell walls, releasing fluids. These fluids then ferment, leading to the unique properties of Perique.

Heat– Applying heat to tobacco can mildly or radically change the flavor of tobacco. Some people even use their own form of heat processing at home to achieve a certain effect, such as putting an unopened tin on the dashboard of their car on a sunny summer day. Different methods of applying heat will do different things. Some methods include:
Steaming– This not only will help to caramelize the sugars in the leaf, but also opens the pores, allowing the tobacco to more easily absorb casings and top dressings.

Indirect heat– This is, basically, baking the tobacco, which will darken the leaf, deepen the flavor and turn the sugars into caramel. It’s used, frequently, to cook out undesirable properties.
Stoving– This is when the tobacco is in contact with a surface that is heated. Picture a large cookie sheet, pizza pan or wok with a heat source underneath, and the tobacco on the surface. It is moved around, pretty much constantly, until it blackens, which changes the flavor tremendously. An example of this type of tobacco is McClelland’s 5105.
Casing– This is the process of adding a (typically) water-based flavoring early on in the making of a tobacco. Casing affects flavor more than aroma (usually), and is, in many cases, used to sweeten sour tobaccos or to reduce the sharpness or harshness of a particular leaf, rather than to impart a noticeable flavor.

Top Dressing– Toppings are added to blends more for aroma than flavor, although they will usually impact the taste. Top dressings are normally alcohol-based and applied toward the end of the manufacturing. This way, the concentrated flavors are carried into the tobacco, and when the alcohol evaporates (or “flashes off”), it leaves just the flavoring behind.
Humectants– These are chemicals that are added to keep the tobacco moist for longer shelf life. The most common is propylene glycol, which is a food-grade product. Also used are glycerin and sorbitol, which also act as sweeteners.
Anitfungals– Antifungals can be chemical compounds designed for the purpose, or can be something as simple as vinegar. In any case, their reason for being in your tobacco is to keep mold from forming in the package.
Most pipe smokers accept pressure and heat as not only acceptable processes in making blends, but find them desirable in creating finished products. I often use one or both in some tobaccos. Many consumers, however, feel less confident in the use of additives or any sort. Since most “unflavored” tobaccos still have some sort of casing and antifungal added, and most smokers can’t detect them, these would have to be considered fairly innocuous. There’s more debate about top dressings and humectants, however. Top dressings have their place. For the most part, American pipe smokers smoke aromatics, and without top dressings, aromatics would be nearly impossible. And if you’ve ever run out of tobacco or forgot your pouch at home and had to grab a blend at a drugstore, supermarket or “big box” vendor, you have humectants to thank. Most of the foil/box blends or plastic and paper pouch tobaccos wouldn’t last two months on a shelf without them.
These are some of the things that are done to many of the tobaccos you smoke that you may not have been aware of. You can be certain, though, that the pride of the manufacturer and oversight by various agencies have made certain that these are not harmful processes, and should have few or no deleterious effects on your blend.