Meerschaum – The Prince of Pipes 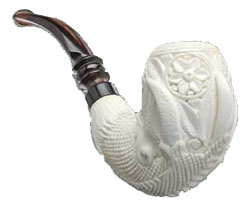 In another article here I suggested that the best pipe to smoke was a briar pipe … a pipe made from a particularly hard timber that only comes from the Mediterranean but perhaps the ultimate in pipes isn’t made of wood at all … perhaps it’s made of stone.

Genuine Meerschaum pipes are regarded as the elite of pipes and they are made of a soft white mineral that is so light it can actually float. These days Meerschaum generally comes from Turkey although there are deposits in several other nearby countries. When mined the mineral is quite soft but hardens when exposed to the sun.


Meerschaum has been used as a building material but for it has also been used for hundreds of years in the manufacture of pipes and cigarette holders. Prior to 1970 Meerschaum pipes were made in various centers throughout Europe and some truly exquisite pieces of craftsmanship were produced in Austria, German and Switzerland but not any more..

In 1970 Turkey banned the export of raw Meerschaum and those old workshops that had produced so many pipes were forced to close. Now those beautiful pipes are only produced in Turkey. If you want to see how the mineral is mined … and you’re not claustrophobic … then check out this YouTube video that will take you down into the depths of a Meerschaum mine.

When you see how the mineral is mined and the pipes are produced you will see why you can expect to pay hundreds of dollars for just one genuine Meerschaum pipe. Of course there are cheaper copies but these are generally made of inferior quality Meerschaum from countries other than Turkey or even cast in plaster of Paris.

MORE READING  A Smoke of Pipes

So why buy a Meerschaum pipe?

Obviously the natural beauty of the material and the carving in each pipe is one of its biggest draw cards. It’s very easy to fall in love with the soft whiteness and the intricate carving that is like no other you have ever seen.

But there are other reasons too. Meerschaum pipes are a collectible item and the genuine pipes will almost certainly appreciate in value. Genuine Meerschaum pipes today that retail for over $500 will sell for more in years to come. We’ll look more at collecting Meerschaum pipes in just a moment.

Genuine Meerschaum pipes are very light-weight and people can notice quite a difference between a Meerschaum pipe and a briar pipe of a similar size.

Because these pipes are made out of a very porous material the tars produced by the burning tobacco is absorbed into the stone rather than being left in other places. It’s those tars that turn a used Meerschaum pipe that beautiful dark brown color.

Also because these pipes are made out of stone and not wood they can be smoked many times a day. There is no need to clean and dry the pipe after each smoke and if the pipe does become dirty a soft cloth dampened with just a few drops of clear alcohol is all that’s needed to clean the outside of the pipe and cleaning the bowl is much easier than cleaning the bowl of a wooden pipe.

There’s no inherent flavor in a genuine Meerschaum pipe … even a used one … so the taste you get is the real taste of the tobacco and not a mixture of wood and tobacco. And because the pipe is made of stone you can clean away the residue completely without harming the pipe.

Now if you were to take a wander through the pages and pages of Meerschaum pipes on eBay you might wonder why the new pipe is so expensive and the collectibles seem so cheap. The fact is that what you’re seeing on eBay are those cheaper versions from other parts of the world that I mentioned earlier. There is simply no way that a beautifully carved pipe that you buy for over $500 is going to depreciate to the point where it is selling for something less than $20.00.

However that doesn’t mean that you shouldn’t look at those cheaper pipes as collectible items but don’t expect them to appreciate in the same way that a genuine Meerschaum will. Perhaps the best place to look for the genuinely collectible Meerschaum pipes isn’t on eBay at all but at the pipe collector shows that are run across the country.

You should also look at a genuine Meerschaum pipe as a new family heirloom that will be passed down from generation to generation. Both my grandfather and father smoked briar pipes and sadly, when they passed, no one thought of their pipes as being heirlooms. Their pipes weren’t given a second thought and just tossed out and it was only years later that I began to wish I had kept those pipes.

There’s no chance that anyone would ever look at a genuine Meerschaum as anything but a treasure that should be kept for the family so investing in one now is starting a family tradition as that pipe is passed down to future generations.

MORE READING  Meerschaum, The Past and Present 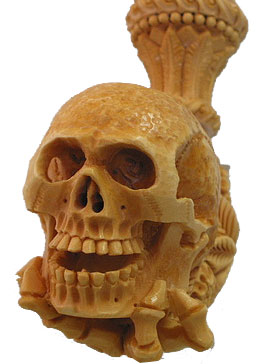 Even now you might be wondering why on earth anyone would want to spend such a large amount of money on a pipe. Well think of it this way … after a hard day’s work you’ve retired to the privacy of your home office or study … you’ve poured yourself a glass of fine port and you’re about to sit back and reflect on the day. Which pipe really goes with that atmosphere … a $75.00 briar or a beautifully carved stone Meerschaum that just adds so much to the ambience?

I know which pipe I would rather have waiting for me when I have moments like that.

For real Meerschaum Pipes that are reasonably priced, and to order your own custom design, check out: MeerschaumStore.com

Meerschaum, The Past and Present