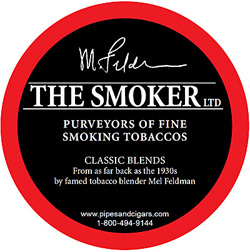 Acquiring a taste for vintage tobaccos is a curse. Of course we all know this hobby is a playground for one’s obsessive inclinations; we have even created our own argot to soften the psychological impact of our collective compulsions. “I was feeling a touch of the PAD coming down, so I told SWMBO I was going out for gas and to pick up some groceries, and just happened to drop in to the B&M on the way. Can you believe my luck when I found a case of ’05 FVF and a patent Dunny? The Warden’s going to need some new shoes when she gets the bank statement…." This example may sound like utter technobabble to the uninitiated, but to our little community it’s a Dickensian tale that we either have lived or are someday destined to enact. The hunt for vintages of current or out-of-production tobaccos is a delicious fixation, to be sure, but comes with attendant heartache and diminishing funds for those who pursue their holy grails.

Fortunately for us, there are people in our hobby like Russ Ouellette. PipesMagazine broke the news a couple of months ago that Russ was recreating not one, not a handful, but fifteen blends from Mel Feldman’s The Smoker LTD. The blends were rolled out at the Chicago show, with Mel himself presenting them alongside the Hearth & Home table. Russ has already garnered some acclaim for his ability to parse and reassemble certain fabled blends of long-ago—you may recall he won a little contest with something called “Black House” not too long ago. Russ’s approach to recreating a blend is to smoke it, and rely on his palate and sense memory, rather than dissecting and reverse engineering the tobacco itself. In his own words, “Using my method, I may wind up using tobaccos that weren’t in the original blend, but that’s how I roll, as it were.” And how he rolls, indeed.

While Kevin and I were discussing the rollout of the blends at the Chicago show, we happened upon a vendor’s table with four tins of the original Mel Feldman blends, circa the early 90s. Unable to decide which to take for a comparison, and proving woefully deficient in our haggling skills, we caved in and bought all four of them (and even saved three dollars on the transaction!). So strap yourselves in for the mini-mega review of four of The Smoker blends: Pine Hills, Fireside, New York New York, and Red Virginia Supreme.

One thing that should be noted is that the vintage samples were not hermetically sealed; rather, they were bagged in food-grade plastic and sealed in loose-lidded tins with tape. This is not necessarily a bad thing; because the blends did not undergo an extended period of sealed fermentation, the aging process was basically at a standstill—frozen in the 90s, a time capsule of what Mel was measuring out on his antique Detecto-Meter scale back at the shop. Some gentle rehydration at home brought them back to life, and what a time it was leafing through the history book of tobacco for this review.

Always one to enjoy a good aromatic, the first of the blends that I gravitate to is Pine Hills. It’s a blend of burley and black Cavendish that epitomizes a tobacco shop aromatic: a classic, light vanilla scent, built around a nutty burley backbone that lends strength and body with a hint of bready chocolate. Rubbing out the chunky pressed Cavendish and cube cut and giving it a few minutes to dry yields a luxurious, long smoke. The aromatic flavoring is applied judiciously, because as Mel himself says, “Nobody likes those goopy aromatics—my blends are for pipe smokers!” Physically, the appearance in the tin of the old blend versus the new one is similar—the jet-black Cavendish mingled in with darkening mahogany leaf in a perfect cut for gravity feeding the bowl. Tangibly, both vintages have the same body, mouth feel and aftertaste, and the room note is nearly indistinguishable between the two: mild, sweetish, and old-timey. Tongue bite was never a danger, and the nicotine enough to satisfy. To me it was like memories in a can, and I could almost feel the breeze of the ceiling fan, could almost see the wooden walls of Mel’s shop, lined with vintage tobacco tins and cigarette boxes. Smooth and uncomplicated, without bite, the letter and spirit of this blend were thoroughly captured. 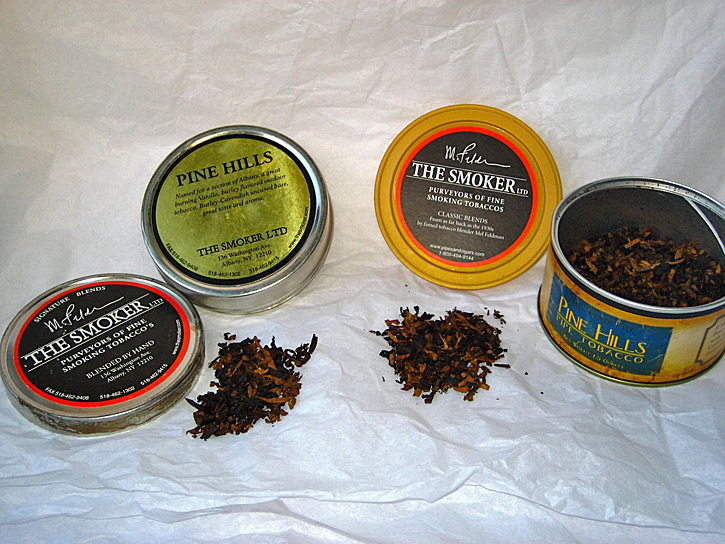 Without the tins, it’s hard to tell them apart 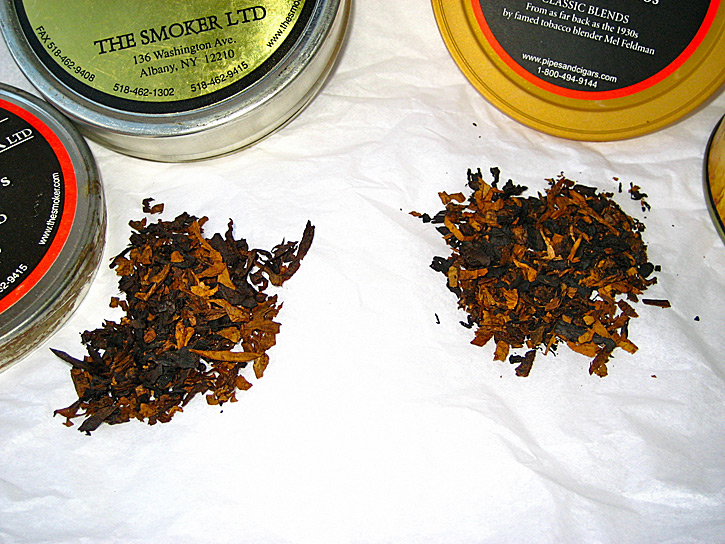 Next on the lineup is Fireside, one of the original 1932 recipes that came with the shop when Mel assumed ownership from its previous proprietor. It was always one of the top sellers in the shop, and with good reason. It’s an unassuming English style blend at first glance—with loads of Cyprian Latakia, plenty of bright flue-cured, some Macedonian, “double out” burley, and a little unflavored black Cavendish to round it off. Visually, the old tin has suffered a bit for its age, the finer cut of the leaves crumbling a bit with the lack of moisture. The new blend is in a larger rough-cut, but with the same proportion of light and dark strands comprising it. The tin aroma of both is malty sweet, the Virginia enhanced with the smoky, loamy notes of the Latakia. Fans of this blend will be pleased to know that through repeated, alternating bowls, I was having a difficult time distinguishing between the original and the re-issue; it’s an absolute dead ringer in taste, body, and aroma. In the tin and through the top of the bowl there is a definite vegetal, woodsy character with highlights that are lemony, but with an herbal complexion—think lemon thyme rather than citrus fruit. The balance of the Virginias really brings out the best of the Latakia here, and tempers it to be suitable for an all-day English. Mid-bowl to heel finds the flavors darkening, with an almost Tootsie Roll chocolaty note (the secret of the Tootsie Roll flavor being cocoa underpinned with fruit flavors). Burning characteristics are spot-on, and the elegant structure of the blend lends itself to pairing with a good brandy or other digestif. 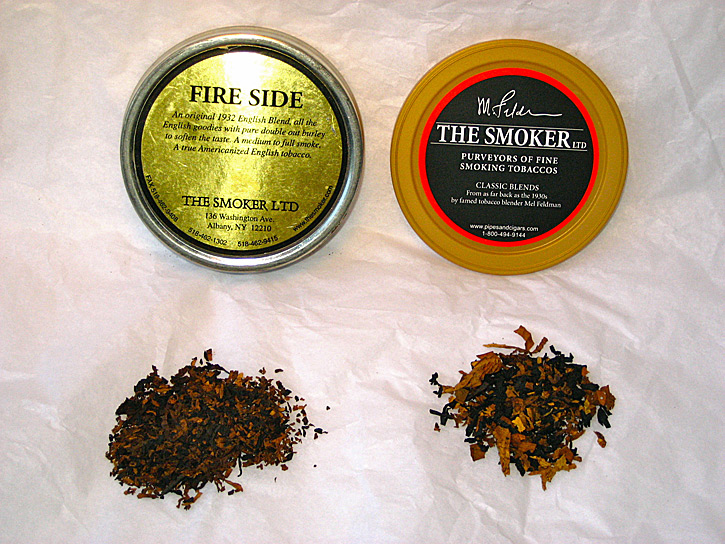 A larger cut for the new one, but the taste remains the same.

New York, New York—the blend so nice Mel named it twice. Sorry, I couldn’t resist. This really is a magnificent blend, and a bit of a departure from the original. While the old version was a light-medium English with Latakia, Russ’s reimagining retains the rich red Virginia (how’s that for alliteration?) while eschewing the Latakia in favor of more floral Turkish tobaccos and a pinch of Perique for the smoky component. Remarkably, the blend completely embodies the feel of its former, while opening it up to a fuller taste profile. Both blends are redolent with the umami tang of the red Virginia, with a hint of the truffle-like pungency from the Perique that calls to mind a savory dashi soup stock or well-aged Parmesan. Russ’s love of, and wizardry with, Perique is well established, and here it plays perfectly as a substitution for the more pedestrian Latakia. On the light there is a determined floral burst from the Turkish, which remains as a thread woven through the background as the bowl progresses. By mid-bowl it settles into a well-orchestrated chorus of spicy, sweet and savory defined by the blend of the four Virginias—two reds, bright, and stoved black—with the Perique thrumming a bass line that crescendos at the heel. Bowl after bowl I am astounded by how similar the blends are with their different constituents, but find the new version so tantalizing that I nearly finish the tin before I am able to take pictures. While I haven’t tasted the full lineup of the blends yet, this one is a standout performer, and a definite addition to my own cellar. 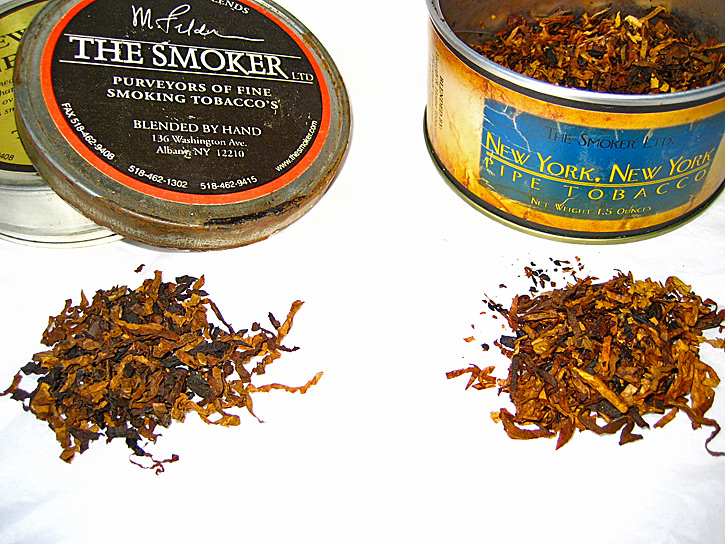 Note the olive color of the Oriental in the new version

The final blend, Red Virginia Supreme, is another English built around the core of red leaf, Latakia and a touch of Perique. Here again Russ adds a bit of Turkish, and again it opens up the bouquet of the smoke and realizes its full potential in doing so. Rounding out the Virginias with a touch of bright and some matured broken flake, he again nails its profile to the door with aplomb. With the cut differing a bit from the former, the burn is improved and contributes greatly to the enhanced flavor. The light and top bowl is all red VA, rich and round, with a hint of floral sharpness from the Smyrna and a walnut tang from the Perique. The use of the Cyprian here is much more of a supporting role, and it draws the flavors together through the remainder of the bowl, eventually lifting the Oriental to create a spicy, almost carrot cake impression. As an interesting anecdote, my girlfriend accidentally tipped the tin over onto the floor, spilling a few grams out. Rather than toss it in the dustbin, she sprinkled it into her bathwater—she loves the aroma of Latakia (yes, she’s a keeper). By her report it made for the best after-work bath she’s had, and she recommends it to any pipe widows out there as a pleasant aromatherapy. And Russ, if you come out with tobacco bath salts, I expect a piece of the action. 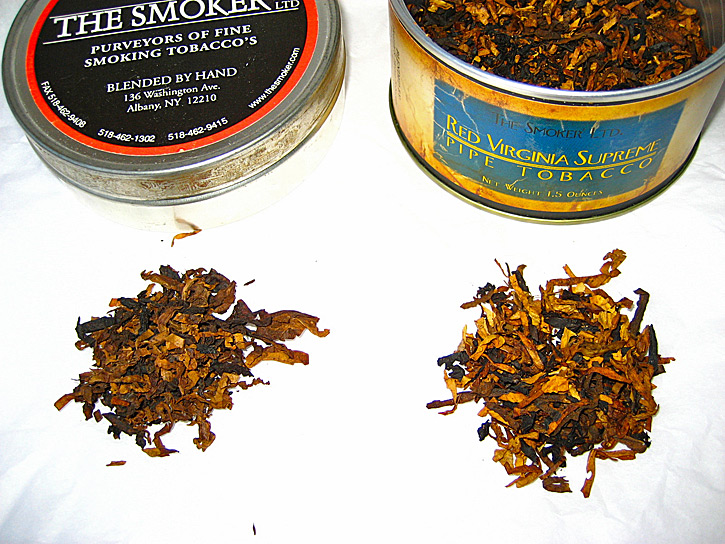 Again, difficult to distinguish between them

Although he claims not to care for recreating old blends, with all of its inherent pitfalls and the possibility of disgruntling an adoring fan, Russ is damn good at it, and it shows. This resuscitation of The Smoker blends is a boon to the consumer, with a broad range of tastes and a classic personality that is sure to make them a staple in many cellars. I know I’m going to have to order some more, as I’m finishing the last of the NYNY blend as I file this review with the editor.

Mel Feldman’s The Smoker Blends Are Back!