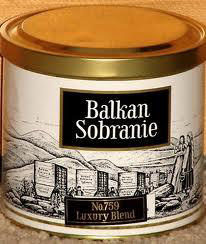 As G. L. Pease refers to it, Balkan Sobranie is “The Stuff of Legend“. This long ago extinct brand of pipe tobacco is probably the most legendary of all pipe tobaccos. Even after two decades of being out of production, it is still one of the most talked about tobaccos in online forums.
We now have a collaboration between three of the most prominent pipe clubs across America in sponsoring and hosting the first ever, “2011 Balkan Sobranie Throwdown”, which will be a competition to try to re-create this famous blend.
The Seattle Pipe Club and the New York Pipe Club are co-sponsoring the competition, and the Chicagoland Pipe Collectors Club will host the final judging and awards ceremony at the Chicago International Pipe Show at 5:00pm on Saturday, May 14th.

The brainchild of Seattle Pipe Club President, Matt Guss, the 2011 Balkan Sobranie Throwdown is as much about entertainment as it is a competition. For anyone that has spent time with Matt, Gary B. Schrier, and other officers of the Seattle Pipe Club, you know that they are not only well-versed in tobaccos and pipes, but they are also witty, humorous, and frequently entertaining. You can get a feel for how the club combines seriousness and fun at the same time by viewing our coverage of the Seattle Pipe Club’s 10th Anniversary.
Regarding the contest, Matt states; “This Throwdown is purely for fun — we don’t expect to faithfully actually recreate Sobranie for many practical reasons. This is just the kind of event that breathes fresh air into the pipe world.” The club acquired an unopened 200 gram tin of Balkan Sobranie 759 dated from the mid 1980’s for the price of $700. It was purchased from well-known pipe collector, author and PhD psychologist Fred Hanna.
Three tobacco blenders will compete to see who comes the closest to the original blend. They are Mike McNeil of McClelland Tobacco, Russ Ouellette of Hearth & Home, and Carl McAllister from Altadis. The three judges will be Rick Newcombe (pipe collector and author of In Search of Pipe Dreams), Joe Harb (renowned tobacco reviewer), and Neill Archer Roan (pipe collector and author of A Passion for Pipes).
The Competitors

Each blender has been provided 14 grams of original Balkan Sobranie 759. Their assignment is to come as close to the original sample in taste, look, aroma and overall smoking qualities. They are to submit 3 pounds of their contest matching blend by April 20. Judges will rate each blend on a scale of 100 points. The blend that earns the highest point score wins. This will be a blind contest: all blend entries will be submitted to the judges unlabeled so that they will not know the name of each contestant until the final judging on May 14th. Final judging and Awards ceremony will take place before a live audience in the Smoking Tent at the Chicago International Pipe Show at 5:00pm. Free samples will also be provided to show attendees.
Complete rules can be viewed in PDF form in the 2011 Balkan Sobranie Throwdown Welcome Letter.
Club Websites:
Seattle Pipe Club
New York Pipe Club
Chicagoland Pipe Collectors Club