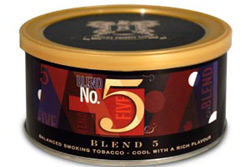 I recently re-evaluated my summer rotation, adding more Latakia blends and boy am I glad I did. The pleasures of these summertime Lat-itudes have been eye-opening, and I encourage all of you to break out of prescribed habits, at least once in a while, to ensure that smoking not become an overly regimented exercise.

Moving on to another warm-weather discovery, this month’s adventure is taken with Sutliff Private Stock’s Blend No. 5. The journey begins with the tin itself: the artwork decidedly modernist, abstracting the number 5 and offering the descriptive text of, "BALANCED SMOKING TOBACCO—COOL WITH A RICH FLAVOUR". Is this an act of modernist art in itself—rejecting the formalism of touting one’s ingredients, making meta-commentary on the literary tradition of advertising copy—or merely, as my girlfriend suggests, “just the way they want to describe it?” Regardless, once the tin is opened the mystery of its contents becomes apparent: the Latakia in this blend is bold, assertive, and indeed well balanced with the pressed Virginia and burley that complete the trio. Styled as a robust English, the aroma does proclaim itself immediately on opening, but then relaxes a little with some airing time; the bouquet calms and the blend’s complexity becomes more apparent. Imagine the smell of a log cabin, slightly musty and humid; stoke the fire, toss on a log of sandalwood, and you can begin to have an idea of the aroma. The ribbons themselves are hearty, chestnut- and reddish-brown, streaked through with jet black. After regaling my girlfriend with a barrage of ruminations on the modernist camp, extolling the virtues of Dos Passos, and gently stoking the ember in my Sasieni billiard, it was obvious that I’d become both smarter and more attractive since opening the tin*. This was promising to be a good smoke. 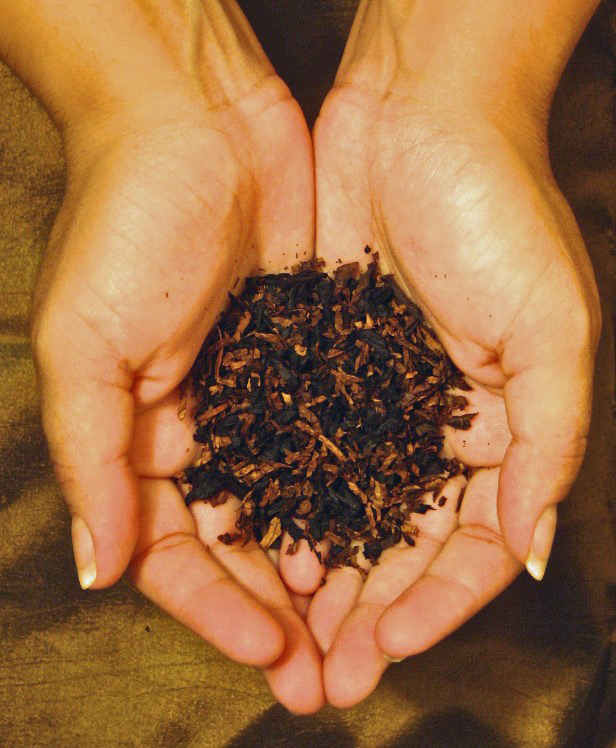 “So have you had tobacco today?”

A tad humid in the tin, as mentioned, it bears some drying time to achieve my preferred smoking moisture level. Once realized, lighting it opens the cloak of the Latakia, revealing more fully the underlying flavors from the supporting cast. A mild sweetness is contributed after a slightly sharp, citrous opening note, and the burley adds the proper body to hang the other flavors on.

It would be reductionist to say that the avant-garde movement rejected the old garde, as it were; it’s better argued that modernism was in fact the logical extension of its predecessors, and was rooted in a re-imagining of the ideal envisioned in expressionism and impressionism. Likewise, while this blend was apparently made as comparable to Dunhill’s 965, I don’t feel it was ever intended as a clone—it is, in fact, striking as a blend in its own right; one that references 965 as an homage within the idiom.

Blend No. 5 approaches the same general flavor profile as 965, but with its own character. Although overwhelmingly smoky in the tin, the flavor and aroma of the smoke itself is more subtly varied and nuanced when burning. Behind the Latakia’s earthy spice there is a constant sweetness, though mild, and hints of floral or herbal essences—at a turn honeysuckle, then sage. This dance continues from the top of the bowl through to the bottom, and with repeated bowls one can begin to appreciate the balance that is negotiated. Again and again I’m struck by the flexibility that the Latakia shows, from its boisterous introduction to a lingering peaty background aftertaste. It really covers the palate in this blend, and seems responsive to different pipes as well as different climates, taking on a much different aspect when enjoyed outdoors on a hot and humid evening as opposed to sitting in the office under the air conditioner. This kind of nuance is uncommon in many tobaccos, and it’s worth spending some time to get acquainted with it. 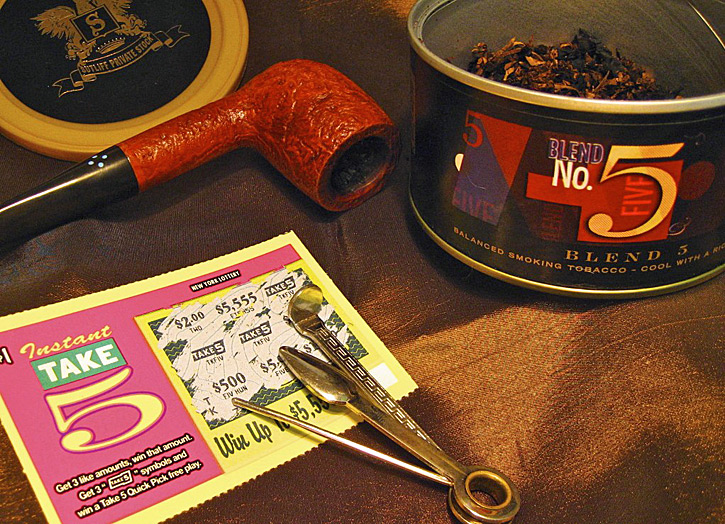 Compliments will flow from those who enjoy the campfire aroma of Latakia, though non-smokers are likely to offer invectives, as #5 produces a thoroughly heady room note with a large volume of smoke. It’s a perfect companion for a lazy afternoon reading or writing, and lends itself to quiet contemplation rather than involved activity. More than once I had to slow my cadence down while chasing the sweet notes, and find that beverages with a slight dry or bitter character tend to make these notes stand out in relief a little better in the smoke. In general it does smoke coolly, as advertised, though aggressive puffing can push the Virginia to bite. It’s all about pacing. I would recommend this as an excellent introductory blend for those new to English styles and Latakia, as well as offering a superb value for the more experienced smoker, who will appreciate that it’s available in both 1.5-ounce and 8-ounce tins. Overall it’s made me stronger, smarter, and better looking* for the experience, so I picked up a lottery ticket before working on the photo shoot for this article—and wouldn’t you know it? I picked a winner.

(*-These statements have not been evaluated by the FDA. Or my girlfriend.)