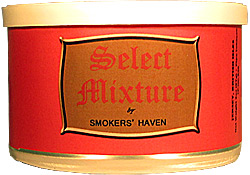 Writing tobacco reviews is a tough job, but somebody’s got to do it. Rather than let my smoking habits be determined by my mood, caprice or the weather, I am forced to buckle down and thoroughly deconstruct whichever blend is next on the slate. Sometimes the tobaccos reveal all their secrets quickly and willingly; others seem to be more reticent, difficult to pin down with just a few words. Some I wrestle with for days on end, some lead me quickly to the finish line. Occasionally, a tobacco comes along that overturns preconceived notions and puts to pasture the sacred cows of convention. Such is the case with Select Mixture, now produced by JF Germain for Smoker’s Haven.

Common wisdom says that Latakia-forward blends are best enjoyed in the cooler weather, being too heavy and complex for the summer months, and indeed I found my own habits to have fallen into this convention. Perhaps it was mainly because of reading this theory over and over that made me conform to it, as my own habits generally found me reserving Latakia for winter reading times rather than summer barbecues. How fortunate that the call of duty has led me to dispel this perception. In the midst of a classic New York City heat wave, I found cool refreshment in Select Mixture that has placed it at the top of my favorites list, of any genre. 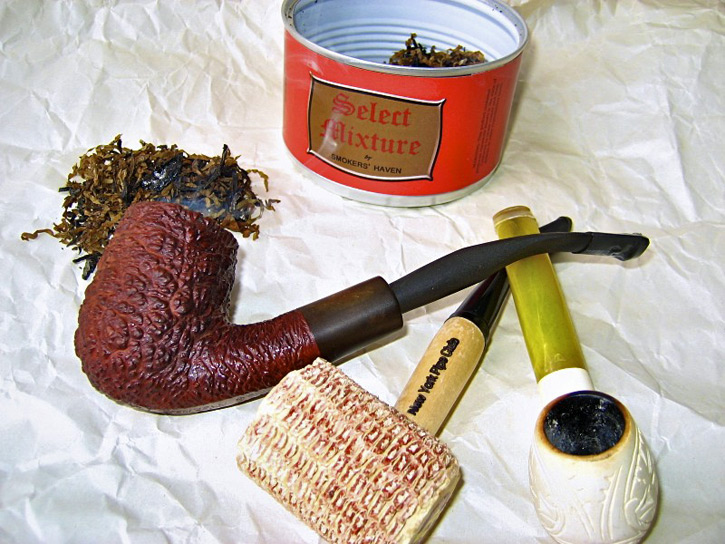 A Hard Day at the Office

Tin: Opening a fresh tin releases a strong, sweet aroma of finest Virginias and the unmistakable tang of Latakia, with expressive floral hints of the Turkish tobaccos underlying and rounding out the bouquet. Predominantly a shag cut, with beautiful mahogany and dark millimeter-width ribbons, it is interestingly interspersed with small chunks of well-aged flakes of stoved red Virginia, glistening with crystallized essential oils on their surface. After some time airing out, the sweetness remains but is more tempered with the smoky florals of the Lat and Turkish, with interwoven notes of fresh clover honey, hyacinth, and a light fresh cherry blossom scent.

Char: Though the Latakia is used sparingly in this mixture, its presence is felt by how it defines the base of the mix. The Virginias perk up on the light, with the more acrid Turkish pronouncing after the ember takes hold. Immediately on the charring light, it evinces an aroma not unlike better cigarettes, owing largely to the common components. The cut is perfectly suited to an air-gap packing method, leaving a small pocket at the bottom of the bowl, and lights effortlessly.

Top: Once the bowl’s going, it deepens in flavor admirably, though not overwhelmingly, striking that perfect balance that is cited on the tin description; "just enough top quality Latakia and Turkish to KNOW it’s there." The smooth and sweetish Virginia owns the top of the bowl, burning with a smoothness that I can only describe as velvety, with a slight milk-chocolaty note sneaking in alongside the wheatish hay-like toastiness.

Mid: This is where things get interesting. As the flavors deepen, the sweetness of the Virginia softens enough to let the smoky, savory character of the other components come through and take the lead. The chocolaty note becomes drier, spicier, and somewhat nutty—a telltale sign of burley, and sure enough there’s a touch of some dark-fired Kentucky in this blend, which performs a wonderful synergy with the Orientals. The Virginia remains in the chorus with its high & spicy notes, now more in the area of coriander and mustard seed, while the dark tobaccos carry the bass line into the territory of palm liquor, steak sauce and hide glue. Balance is everything here, though, and those bass notes never intrude too loudly on the lighter relief of the floral Turkish notes, which tend to define the room note.

Finish: Throughout the bowl the body stays intriguing but not overbearing, managing that tightrope walk between "just rich enough" and "too rich" marvelously. The flavor profile describes a graceful arc from the brighter Virginia-dominated light down through the creamier heel of the bowl, and finishes easily to a light ash consistently. If there is any fault, I should caution against becoming too inquisitive in your puffing while chasing the wisps of flavor; over-aggressive smoking will kindle a too-hot ember quite easily in this cut, and so should be avoided. Easier said than done, I’m afraid, because with a clean palate and reference materials at the ready, one could catalogue any number of fleeting glimpses of flavor—and a particular salt-tinged aftertaste that is perhaps owing to the "ideal climatic conditions" on the Isle of Jersey, the sea air embedding itself in the very leaf. 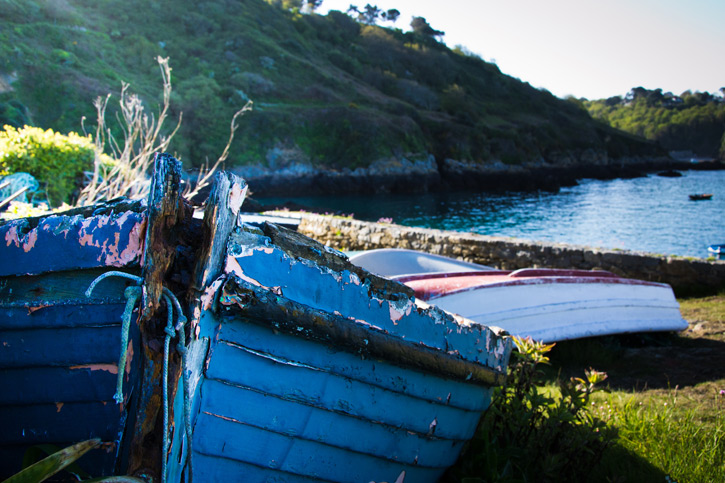 The flavors of Jersey Island

Room Note: Not wholly unfavorable, with some of the floral notes making themselves prominent after the light, but generally in the vein of a rich cigarette, with a good volume of smoke produced. While rather light and mild to smokers, non-smokers may not appreciate it as much as we.

I’ll give Select Mixture 14 out of 15 for presentation. Its anachronistic, yet very recognizable, label packaging is reproduced from the originals and reinforces that this is a blend with a pedigree dating to the 1950s, from a blending house with a pedigree stretching back nearly two centuries. Also, unlike other Germain offerings, this comes in pull-top, 2-ounce tins, courtesy of Cornell & Diehl. As Kevin noted in his Exotique review, it’s great to see how this small niche industry works together to offer their creations to the consumer. The cut, color and texture of the tobacco itself is a beauty as well, earning the bulk of the marks for this score.

Out of 35 for the draw & burn, I think a 33 is fair to assess the fantastic cut and balance that makes this so easy to smoke. As noted earlier, the only problem encountered is staving off over-enthusiastic puffing. Tested in a variety of bowls, from tiny tavern-style clays to my largest meer, it performed admirably and equitably with slight adjustments to cadence. A 44 out of 50 is easily garnered for the flavor + aroma profile. For all its smoothness and softness, it could be an easy recommendation for an all-day smoke; conversely, with its delicate balance and deft blending structure, it could be as easily recommended for times of more studious appraisal. It’s certainly on the mild end of the spectrum, but not without some power behind the richness due to the modest amount of dark-fired in there.

I smoked through a few bowls of this before it dawned on me just how complex this blend really is, while being at the same time easy enough to burn through all day. This is one of those great blends. With its quality of components, I can only imagine time in the cellar will yield one of the classics of the tobacco world. Worth its boutique price point, stock up on this one if it appeals to your tastes. It certainly places in the benchmark of mild English mixtures.

At the last couple of pipe shows I’ve had the good fortune to chat with Premal Chheda, the proprietor of Smoker’s Haven, about the current production of his shop’s classic blends. The Smoker’s Haven mixtures were once produced by the House of Sobranie, and now are again produced by the heir to that particular legacy, JF Germain & Sons. Germain’s reputation for an unparalleled commitment to quality and superior small-batch tobaccos is well deserved, as evidenced by the popularity of some of their other products such as Penzance. Fortunately, Premal does not foresee the problems with scarcity that the Esoterica blends seem to suffer from, with a steady current supply and plans to expand to 8-ounce tins by this autumn, and 4-ounce tins shortly thereafter. It is thanks to Premal’s love of pipes and tobacco that these recipes were revived a decade ago, and the legacy continued for us to enjoy.

Brand: Smoker’s Haven
Blend: Select Mixture
Blender: JF Germain & Sons
Type: Mild English
Country: UK
Cut: Shag & Broken Flake
Tobaccos: Virginia, Latakia, Turkish, Dark-fired Kentucky
Strength: Mild
Room Note: Cigarette-ish, mild
Tin Size: 2 oz.
Tin Age: New—under 1 year
Tin Description: WE MUST CONFESS!!! In our growing TOBACCO FAMILY, both in domestic blending of quality and outstanding mixtures from England, because many of us at the shop “crave” a goodly amount of Latakia and Turkish, our “first on the Hit Parade” have ample quantities used. WE WOKE UP FINALLY!!! Many of you KNOW the slow-burning, dry-smoking qualities of our outstanding English Mixtures BUT did NOT want large amounts of Latakia and Turkish. Our new SELECT MIXTURE answers that need now. MILD, SLOW-BURNING, DRY-SMOKING with just enough top quality Latakia and Turkish to KNOW it’s there. SELECT MIXTURE. RICH WITHOUT BEING HEAVY!!!