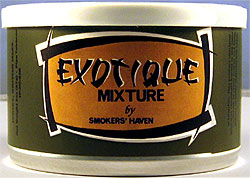 It’s been a while since I’ve personally done a tobacco review. The reason? It’s work. It’s not the same thing as casual, leisurely pipe smoking. Yeah, I know—poor, poor Kevin! He has such a hard job!

While I was at the Kansas City Pipe Show last weekend, Premal Chheda, pipe maker, and owner of Smokers’ Haven in Columbus Ohio gifted me a tin of his own Exotique Mixture pipe tobacco.

I knew Exotique Mixture would be right up my alley, as I love "Balkan-style" blends with Latakia, Virginia and Orientals. The tin description actually reads "Turkish", but that’s the same thing as Orientals. The tin art / logo design is even done in an Oriental style, so I am anticipating this blend to be leaning towards an English / Oriental.

It is in fact made in Jersey, British Isles—which gives up the secret of the producer as J.F. Germain & Son, which has been producing tobaccos since 1820. They produce a wide array of their own tobaccos, and make blends for several other brands, including the "New Balkan Sobranie". Interestingly, even though Germain makes Exotique, it is tinned by Cornell & Diehl. I recognize the 2 oz. (57 gram) tin, and by U.S. law, it has their tobacco manufacturer number on the tin—TP-NC-628. It’s interesting how different people and companies work together to bring us so many fine choices in pipe tobacco.

Upon opening the tin, I was surprised by the fine ribbon-cut. Not that there’s anything wrong with it. I just don’t see it too often in most of the tobaccos I smoke. The fine cut, and how all the long, little strands are intertwined and intermingled, and impossible to separate from each other without breaking, reminds me of angel hair pasta. The tobacco is quite soft and springy. You can push it down into the tin, and it springs right back up. You can grab a handful and squish it into a ball, which will hold for a second or two, and then expand back out. I keep touching it and pushing it in the tin as it feels as soft and smooth as 800-thread-count Egyptian cotton.

MORE READING  Play Misty For Me

As with most mixtures that contain Latakia, its’ smoky aroma initially dominates the bouquet. However, after you take a few more whiffs, you can detect the unmistakable fragrance combination of sour Orientals and sweet Virginia tobaccos. My mouth is watering in anticipation. The tin-note reminds me a little bit of the 2012 re-release of Balkan Sobranie. Visually, dark colors of brown and black dominate, with a nice sprinkling of tans and a few yellows.

Since the tobacco is so intertwined and springy, I decided to use the Air Pocket Pipe Packing Method. The tobacco doesn’t feel moist, but it is definitely not dry. I packed my 2002 Dunhill Sandblasted, Half-Bent Cumberland, and let it sit for a couple of hours. This was not intentional. I had several interruptions since it was during the work-day. The horrors. I know.

Ironically, the so-called "charring light" actually tastes like charred meat. However, after the flame settles down, the smoke immediately becomes quite smooth and creamy, as cliché as it sounds. The tobacco produces thick, rich, huge clouds of smoke. It’s extremely smooth. I can exhale large clouds of smoke through my nose, and it doesn’t burn. The smoke actually feels soft and pillow-like coming through my nose. It even leaves a velvety feel on my tounge. The flavor tastes like a caramel-covered Granny Smith Apple. There is an underlying sour essence that is dominated by the sweet caramel taste. There are also hints of both dark chocolate and milk chocolate.

As the bowl progresses, the smoke becomes even more rich and velvety. Although the Latakia dominates the tin aroma, which is normal, it does not dominate the flavor. It’s definitely a supporting character. Exotique Mixture is a perfect symphony of Latakia, Virginia and Turkish tobaccos all harmonizing together to create something delicious and unique. None of them dominate. They all come together as one. Just as sweet & sour works for Oriental food, it works exactly as well for this Oriental tobacco blend.

Describing a smoking flavor as "smooth & creamy" has become a cliché in cigar reviews, but it is definitely applicable here. I can’t get over how soft and velvety the smoke is. Over the weekend I was smoking some 30 and 40-year old vintage tobaccos, which were amazing, and Exotique is nearly as good. This is a brand new tin, and it is almost as sweet, soft, and smooth as the decades-old tobacco I recently smoked … for a fraction of the price.

The tobacco burned extremely well. On average, for a 45-minute smoke, I normally re-light 3 – 5 times. For Exotique, excluding the charring light, I only had to re-light once. Rich, thick clouds of smoke continue throughout the entire bowl. Just a tiny bit more of the smokiness of the Latakia starts to appear near the end of the bowl. The tin description says, in part; "Primarily originated for the ardent pipe smoker who either desires an ‘extra-rich’ mixture for all day smoking pleasure OR for he who wants several bowlfuls in the evening, after his delicious evening repast." Exactly! I could smoke this all day, bowl after bowl, AND it would be wonderful after dinner as well.

Everything about this tobacco is soft, airy and pillow-like—the mouth-feel, the retronasal olfaction, and even when the tobacco is tamped it feels pillowy. It burned down to almost nothing. The amount of ashes that were left at the end would be considered a pinch in cooking.

It turns out that Exotique Mixture is so good, that word has spread before I could finish my review, and it sold out. I called Smokers’ Haven, and Premal didn’t yet have confirmation on when his standing order would be filled. Germain’s production is already at capacity. Smokers’ Haven does have some other excellent tobaccos, so I would bookmark this page to see when Exotique is back in stock, and perhaps try one of their other house blends. Based on this one, I bet they are all excellent. 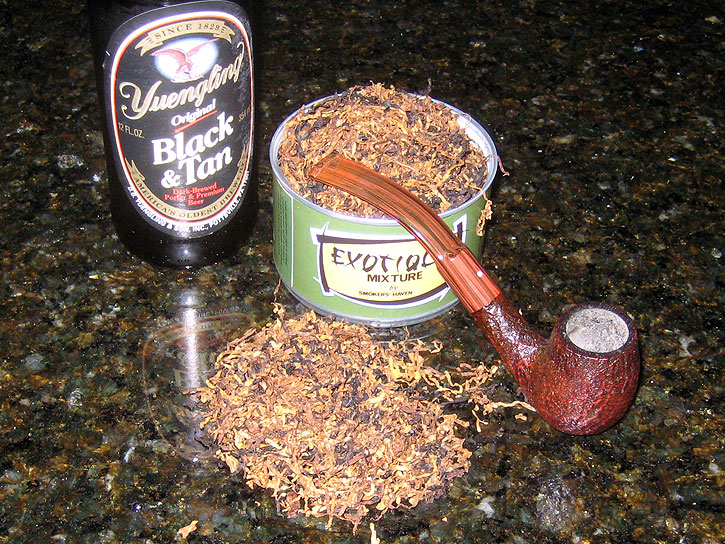