I feel like a cliché and cartoonish version of Paul Revere going into the end part of this year, “The Holidays are coming!  The Holidays are coming!” as if there is some impending doom about to arrive.  This is normal for me:  I’m not a “holidays” guy.  I never have been and I never will be.  The best I muster are the tackiest of fake trees, weird and spooky decorations and questionable sobriety.  Regardless, traditions of any kind are ignoring the bumpy ride of the year we’ve had so far.  More importantly, ‘tis the season for new tobacco coming out, the pipes-of-the-year and special Christmas briars are being offered.  Jumping awkwardly on the new smoke bandwagon, I was also one of the lucky firsts to get a pre-release of Sutliff’s Cringle Flake.

What had me excited about it was Brian Levine’s dive into it on his Radio Show 427 (if you haven’t heard this one, you should).  The other thing that piqued my interest was the aged tobacco Cringle Flake boasts:  ten year aged Red Virginia and vintage Perique from 2003.  I’m a huge fan of Red Virginia, and though more hesitant about Perique for my sensitive little palate, I had high hopes the treatment of this flake would be a well-rounded seasonal delight, even if it might not be available forever.

I didn’t have nearly as much trouble opening the tin as Brian did, however I almost got a lap full of tobacco as one of the product’s paper caddy edges stuck to the seal of the lid.  Unfrazzled, I shoved my nose in the flakes.  Tin-sniffing isn’t nearly as weird as it sounds; this is a part I relish.  There’s an acidic, white wine vinegar scent mixed in with a remarkably bread-like and oaken woodiness.  It’s a vibrant and eye-opening, clean and pleasant smell overall.  The appearance of the tobacco is more of a rough flake than a tidy one, dark and thicker, resembling homemade chunks of beef jerky more than anything.  It’s a crumbly, but dense and moist product.  More on that to follow.

When I listened to Brian talk about the variations of the Perique to the Virginia, and how getting a good mix is important, I decided to revisit a flake preparation method I haven’t used in a while:  homemade cube cut.  With a knife or some good scissors, I choose a single flake and cut against the grain, then roughly rub them out.  Thicker flakes work best for this in my opinion (fewer snipers for the airway), and this method works well for large and small bowls alike.  Packing in this method for a good draw is relatively straightforward as long as it’s kept simple—dump, press a bit, test the draw, top off, and grab some fire.

Regardless what your packing method or approach happens to be, this tobacco I mentioned is fairly sticky, dense and damp.  An hour or so just left in the open made getting things started easier across the board.  I chose mostly cobs for this adventure with Cringle Flake, because I had no idea how generous Sutliff chose to be with the Perique (it’s a tough ghost to bust in a pipe).  Another advantage is for lighting, which sometimes was a chore.  More on that to follow.

The first puffs of Cringle Flake, as soon as any taking of the flame fussiness are over, are straight to the point:  you get the pleasant, yeast-like beer and bread quality I enjoy with Red Virginia and a nice application of black pepper and pleasant mouth and tongue tingles.  What started out acidic and vinegary as the tobacco rest in the tin, fire makes it change completely.  There’s been a long-standing debate about certain makers of tobacco having a “ketchup” or malt vinegar scent to it, and this isn’t it.  It has something to do with the aging and pressing process I’m certain, but it never transfers to the smoke.  About a dozen puffs in, the aged Perique does what any Perique will do, it builds flavor and sensations on the taste buds.  Much like a shake of a good hot sauce or salsa on a taco, pace yourself and your tongue.  Unless you also prefer licking the blender clean after making margaritas—while it’s on.

Mid-bowl is nearly always reached with a serious decrease in both the breaded Red Virginia and the peppery Perique.  What is left is the attitude of the tobacco from the aging.  Cringle Flake does a fantastic job of providing the end-user the aged tobacco benefits without the space and patience concerns we face when we do it ourselves.  Fresher Perique has a lot of dry, tanin-like qualities as well as very rich and sometimes bitter flavors that, if 2003 isn’t long enough, fifteen years or more drives out of the leaf.  Red Virginia gets sweeter, and on the upper palate, and in this tobacco, almost like fresh-pressed waffles.  It’s tobacco that smokes smoothly without losing any backbone, and I really enjoyed that.  What became tedious was the maintenance of Cringle Flake.  The relighting and re-tamping did get to be somewhat distracting.  This is lessened by drying out the tobacco and choosing a rougher preparation method.  I rarely got to drive Cringle Flake in “autopilot,” and there wasn’t much light-it-and-forget it.

If you’ve gotten to the end, you’ll know it.  All but the toughest tongues power through a giant bowl of anything charged with Perique and wonder if it’s time to tap out.  My tongue isn’t a heavyweight badass, but it’s no whimpering quitter, either.  Cringle Flake isn’t a fatiguing tobacco.  The only problem you may have is puffing too much or a loose, hot buring pack from the get-go.  Personally, a few more lights and tamping to a regulated draw was the secret to keeping this tobacco in flavor country and not tongue-bite alley.  The very last wisps of smoke from a bowl of this are surprisingly clean.  There’s not a lot of tarry build-up or intense flavors, but that may be for the best.  Most of the sweetness has left the bowl, and it’s a savory experience at the finale, with hints of thyme and rosemary, and if you don’t think too hard about it—a little sourdough.  Funny enough, this cheeky tobacco stopped resisting relights about a dozen puffs from the end.  Figures.  Thanks, Santa.

Speaking of tacos and hot sauce a few paragraphs up, I wanted to write about a specific pairing with Cringle Flake.  This time of year I refuse to be far from a bottle of something delicious that contains alcohol.  It’s not to chase off the cold or tradition, it’s because I really don’t like the holidays, nor the revelers that bring good cheer with their intent and family, and their chaos and shitty attitude with them for everyone else to deal with.  Successful in their endeavors or not, usually I save up a few more pennies than usual and go for a low- to mid-end bottle of single malt scotch.  This time, however, I reached for a spirit more known south of the border:  Mezcal.  Tequila’s older, less pretty and more experienced cousin.  I have a little experience with it, both the gasoline-scented, scorpion-dipped, missing label type  and the fancier, hip stuff.   Once hard to get, Mezcal is now so niche and hip, you can have it nearly anywhere (the good stuff) for $30 – $120 a bottle.  It has a slightly fatty mouth-feel, a tequila-like freshness, not too sweet, and is often wood-aged and even smokey tasting.

What does that have to do with Cringle Flake?  I wanted something meant to stand up to spice.  Mexican cuisine is known for laying on the hot stuff, and Perique is tobacco’s hot sauce.  Xicaru Añejo is a good, aged and only slightly smokey choice at a good price.  Yeah, I polished off the bottle along with the tobacco for this review, and I may go take apart my washing machine for some more coin to go get another bottle.  It’s delicious.

I liked Sutliff’s Cringle Flake, even the somewhat incorrigible nature to which I could relate and respect.  Perique guys might find it a little lacking, but those like me who could take or leave the stuff, it’s a great change of pace.  Perique this aged needs to be experienced.  Nicotine is mild to moderate, and the flavors aren’t overly dynamic or dramatic.  The great part about the tobacco being rather dense and damp is if you’re a power puffer, and a seasoned veteran with Perique, Cringle Flake can handle it.  It never once got hot, unruly or swampy despite the moisture, simply pugilistic when it came to combustion—it could be me, the minimalist in piping practice; I do hope your experience differs.   Brian mentions some doubt as to the aging capability of Cringle Flake.  It’s moist enough (and the tins apparently sealed stoutly), why not give it a try?  It has the important key factors, but to be honest, much of that work has been done for you.  This is a tobacco intended to be enjoyed now.  Sooner rather than later, I might add, because production is limited to 7,000 tins, available sometime after you finish reading this. [Editor’s note: Cringle Flake has already shipped, and it seems to be sold out at most places.]

Whether you ring in this time of year like an obnoxious elf of joy or simply muddle through the best way you know how, enjoy what you can this time of year.  For better or worse, it only comes about once, after all.  Happy smoking and holidays, everyone. 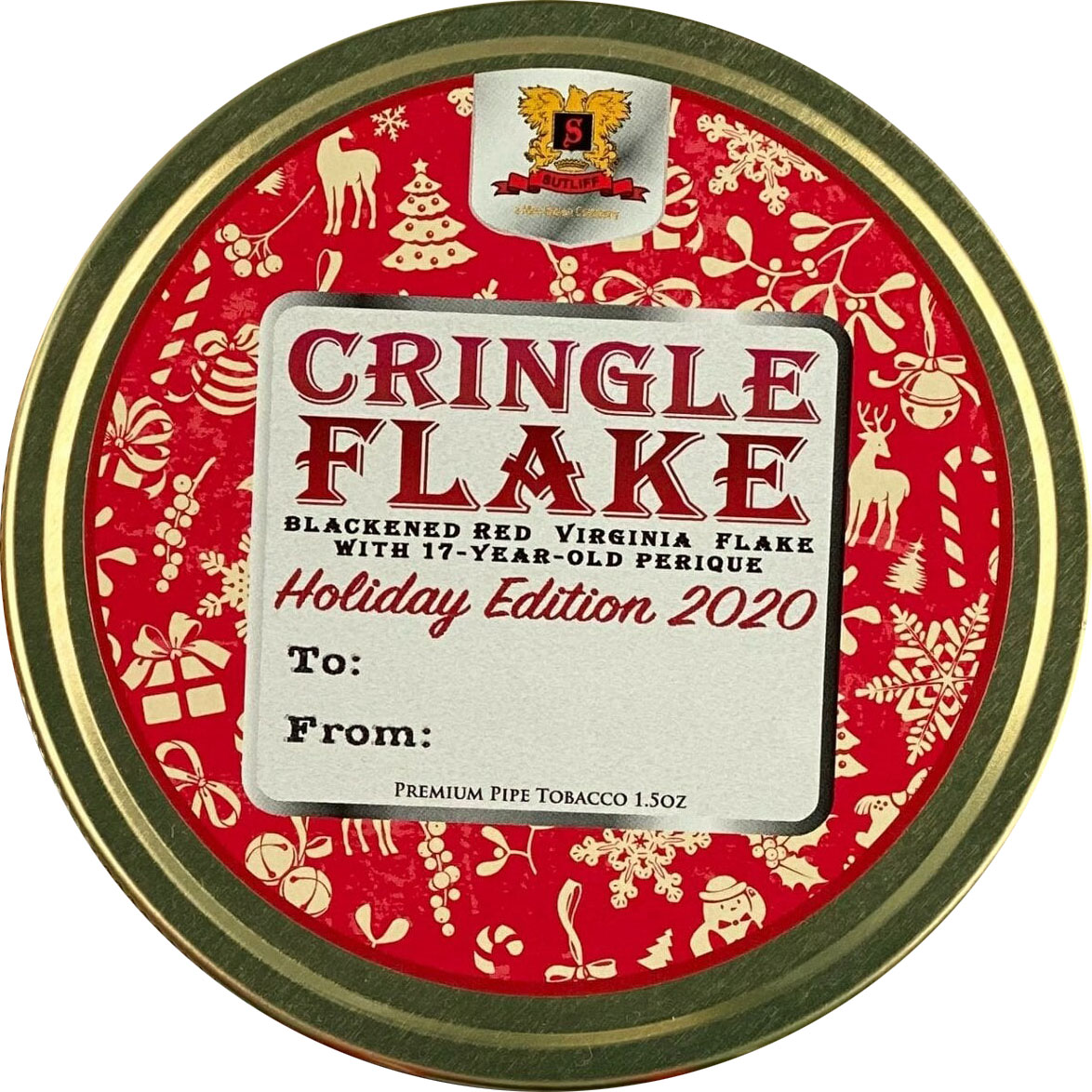