Summertime…and the Livin’ Was Easy 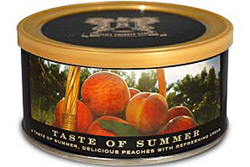 How cold is it outside? So cold that lawyers have their hands in their own pockets. So cold that NJ Governor Chris Christie was able to single-handedly use the weather to coerce North Korea into changing its party alignment to Republican. So cold that I’ve had to resort to bad jokes for a lede-line. So cold that…well, you get the idea. It’s that unpleasant time of year when the shine of holiday anticipation has come and gone, and we’re left to trudge along on the tarnished side of the season, muddling through the slush and counting the days until the spring thaw.

In the absence of Calgon to take me away, I decided that it was a good time to crack open a tin of Sutliff’s Taste of Summer, a refreshing concoction of Virginia, Burley and Cavendish infused with the essence of peaches and cream. Peeling the lid off the tin, I was immediately enamored of the rich, ripe peach aroma and a light bready scent, almost like a freshly baked cobbler in a can. My better half was even more enamored of the smell, and I had to forcibly extricate the tin from her hands as she intended to infuse her bath water with it (no really, I couldn’t make this stuff up—see my review of The Smoker blends. Fortunately, as a substitute, I was able to pawn off some of my athlete’s foot powder on her for the bath, assuring her that the minty aroma was guaranteed to soothe tired muscles as I covered the label and sprinkled it into the tub. Score one for the team!

Back to the tobacco. From the luscious photo on the tin of a basket of ripe peaches to the bottom of repeated bowls of the stuff, the feeling is of a summer vacation in a can. Evocative of warm, lazy days, the scent of peaches in the tin is quite full and tart when first opened, rather candy-sweet and commingling nicely with the aroma of the tobacco leaf. Side by side with some nectarines I picked up at the market for comparison (fruit is in season somewhere in the world at least), there’s a remarkable sameness to the aromatic essence; score one for Sutliff on accuracy of flavors. The tin description touts "delicious peaches with refreshing cream", and somehow, there is a definite aroma of cream, not unlike a Creamsicle®. I don’t know how they pulled that one off, but it’s spot on.

The leaf itself is mainly a rich mahogany brown, with about fifteen or twenty percent jet-black Cavendish mixed in. There’s a light oily sheen on the ribbon cut leaf that evidences its moisture content, and it did well with a short drying time. Packed easily while still soft and supple, I settled in for a little mid-winter escape with some sweet tea and the Gershwin brothers’ Porgy and Bess.

The Cavendish really sets the tone for this blend, unsurprisingly, though it’s not a complete knockout aromatic like Molto Dolce. Rather, the smoke is more subdued than the tin aroma, and lets the aromatic flavor ride as a top note to the sweetened tobacco. Sipped as slowly as possible, the creaminess is delicately evident. Closing my eyes and letting my mind wander in the lullaby of the music was warming in a way that those unfamiliar with the pipe will never understand. With the windows closed and the heat on 10, I could almost feel like I was sitting on the steps of Catfish Row.

My favorite recording of Porgy and Bess is the Miles Davis and Gil Evans collaboration, by a long shot. Evans’ arrangement and Davis at the threshold of his genius are startling in their clarity and musicality, and created an aural landscape of perfect tempo to pace the smoking experience. Sipping my way through a variety of pipes to find the perfect match, I settled into a groove with a beat-up old Dublin that makes aromatics sing in its smallish conical bowl. In it I found the roundness of flavor that best suited the blend; the sweetness softened a bit and the bottom roundness provided by burley and Virginia were able to come through more fully.

The smoke was sweet and straightforward, in counterpoint to the compositional complexity of Evans and Davis. A smoky room was what this album needed though; it is the very nature of jazz to be shrouded in smoke, and Taste of Summer provided ample atmosphere. The room note carried the sweetness well, and translated the aroma of peach quite accurately from the bowl. With the windows closed to a sliver to keep out the blighted chill, I got no complaints from the missus as the cloud from my office crept out to the adjoining rooms. I feel it safe to recommend this blend as a great choice for smoking while out and about in mixed company; only the most ardent anti would disparage its bouquet. It certainly brought a little respite from the arctic onslaught of storms, now reassuringly bearing names like Hercules and Maximus. 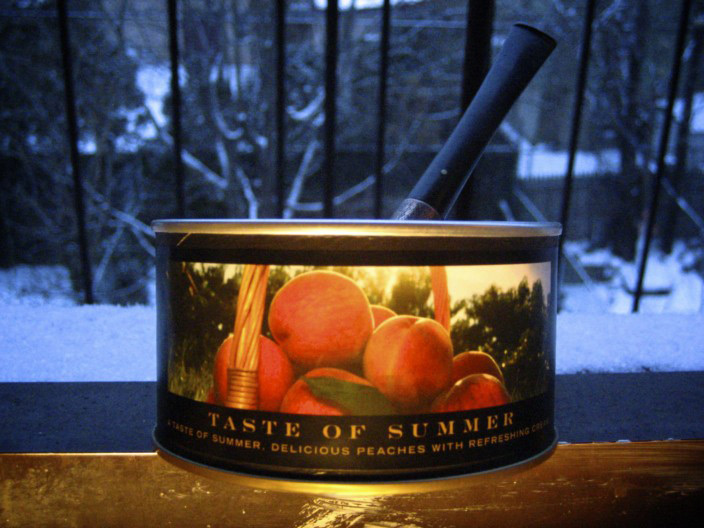 SPONSORED LINK: Read More About A Taste of Summer @ Sutliff-Tobacco.com & Find a Retailer