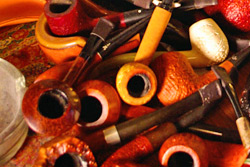 You asked for them, and here they are. Back in April I asked you, our loyal PipesMagazine.com readers, what tobaccos you’d like to see reviewed. While I intended it to be followed in a most timely manner the next month, there were a few blends I’d had on backlog that got in the way of the schedule. Sometimes it takes a while to get a handle on a blend, a process that can stretch for several days or even weeks—and the best blends, of course, we can spend a lifetime teasing apart, a most delicious riddle for us pipe enthusiasts. So, without much further ado, the labor of many, many pipefuls of tobacco, I finally offer you an opinion on some reader selections. 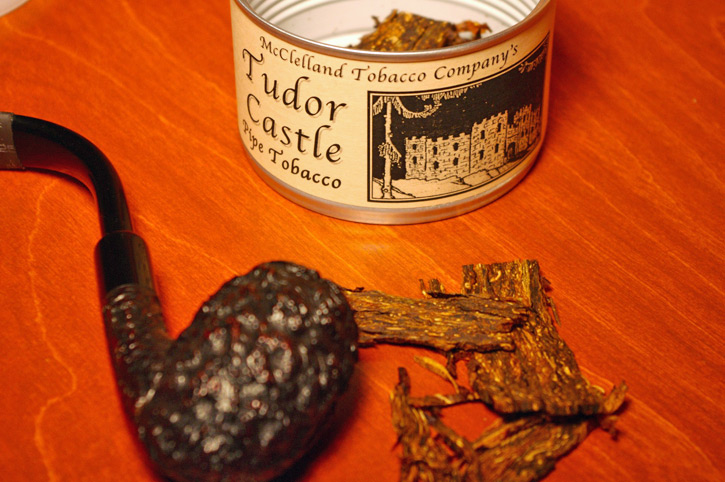 McClelland’s Tudor Castle. Jack Swilling (if that’s his real name) writes that he’s "newly intrigued" by McClelland’s Tudor Castle blend, a VaPerO touting bright and red Virginias, top-grade Yenidje, and a touch of St. James Perique. For him, the Oriental component really brings the blend together and "makes the magic happen"; being a big fan of Virginia-Periques with Oriental myself I placed an order for it immediately, figuring it couldn’t be so bad that I wouldn’t want to smoke through three tins of it. The short story is that I’ve found a new entry into my top five VaPerOs. It’s a brilliant blend in all regards—the presentation of the richly fermented and loosely packed flakes, the succulent sweetness that arises from the interplay of the tobaccos, the full-bodied mouthfeel and aroma, and the delightful woodblock-style tin art that I’ll assume was drawn by Mary McNiel. The full two-ounce tin is brimming with the dark, damp flakes that exude a hint of the trademark McClelland ketchupy scent, doubtless owing to the red Virginia. After a short drying time, the rubbed out flakes burn cool and steady, with a sweet consistency that hints at cola nut, sweet tea, and candied pecan, with just a tinge of the sour saltiness characteristic of the Oriental leaf, and occasional peppery retorts from the Perique. A flexible smoke, it performs well in a variety of pipes, tall-bowled chambers faring best. I’m thankful I took the gamble on buying extra tins for cellaring, as the ones I received were dated 2015; if it’s this good now then a few years should really bring out the magic. 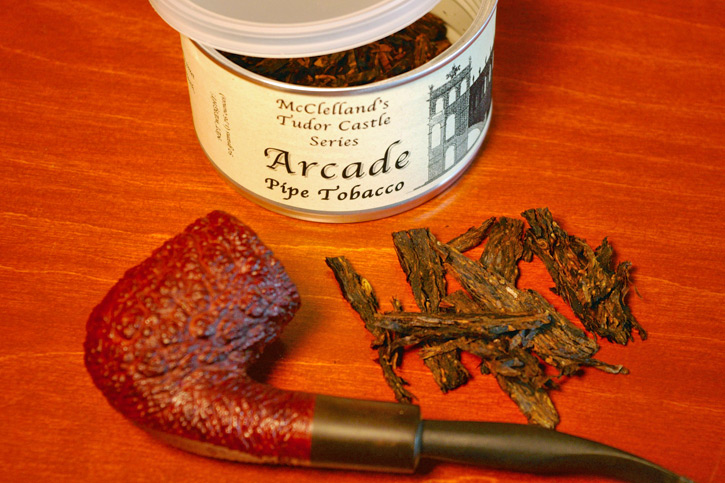 McClelland Tudor Castle Arcade. Since I was taking a gamble on the Tudor Castle, I figured it wasn’t much of a stretch to try out the other label in the series, Tudor Castle Arcade; honestly, I haven’t been truly disappointed with a McClelland tobacco to date. I was also intrigued to discover the blend contains Syrian Latakia, as there are fewer and fewer left as the years go by, with no more to come in the foreseeable future. These three tins were dated 2009, so they arrived with at least five or six years of aging under the belt, a very telling milestone for aged blends. I am happy to report, albeit with some trepidation, that Arcade exceeds its predecessor in flavor. I say with trepidation because I’m now worried I won’t have time to stockpile the blend before you lot buy the tins out from under me; it’s at the top of my cellaring list for sure. The same Virginia-Perique mixture is there from TC, with its high, winey notes and cola sweetness and aftertaste, complemented by Katerini leaf with its floral overtones and the fabled Syrian with its pitched muskiness steering the ride. The balance of savory with salty and meaty highlights over a rich bass sweetness reminds me of a favorite Iranian dish—fessenjoon made with duck. 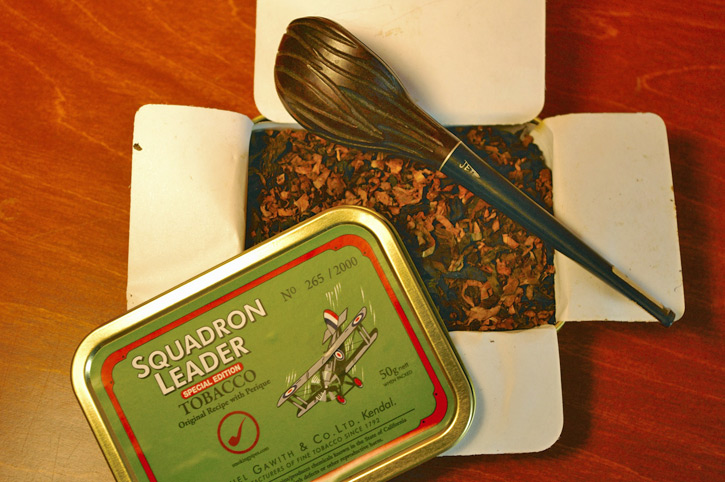 SettersBrace wants to know how Squadron Leader with Perique rates. Now to segue into another Latakia blend, again containing Perique, but sporting a different complexion altogether: SmokingPipes.com’s recent limited-edition offering of only 2,000 tins, affectionately acronymed ‘SLAP’ on the forum. While not a regular production tobacco, I know readers will be seeing some of these on the sale or trade aftermarket eventually. Maybe. It’s really quite good, unsurprisingly; the Cypriot Latakia brings a hide glue dankness to the smoke, as opposed to Syrian’s sweeter tart notes. The parchment-like nose is further enhanced by the Perique, which responds to the Oriental leaf with a more pronounced peppery aspect, dark and sharp on the retrohale. The cut is a perfect ribbon, packed to the brim in the square 50g tins with British racing green label. The tin note is starchy and sour, promising a rich blend even without age. Particularly suited to large, long-lasting bowls, and amicable to DGT, the tobacco is given to slow and contemplative smokes, evincing a shy peek of spiciness with a gingerbread and hard cider mid-bowl; a hint at which direction the effect of several years will have on mellowing and sweetening the mix. Right now it’s young, a little on the dry side, with a slight phenolic tilt. If you had the luck to snatch up a few, you will be rewarded handsomely. Smoking it now, while still so young, I find a smoky black tea—Harney & Sons’ Russian Country with a spot of cream and brown sugar fills the bill nicely—really illuminates the details in the flavor profile. Thanks for the suggestion from reader SettersBrace, and apologies to those who didn’t score a tin. 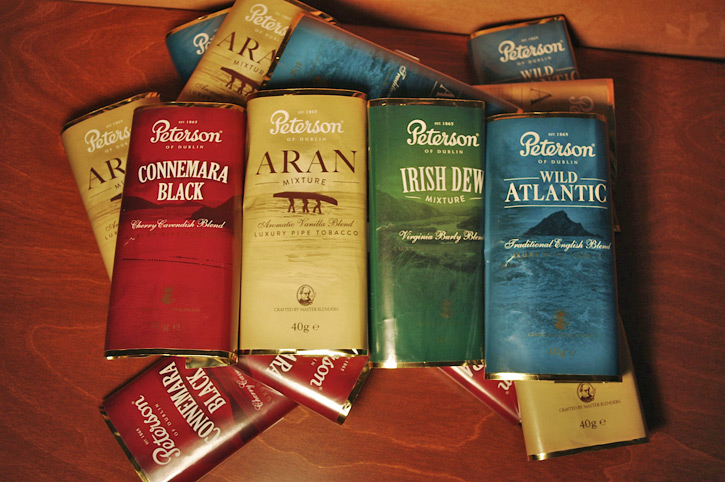 Breaking news: new Peterson tobaccos coming to the States! The Irish are invading, and their vanguard lineup is varied and venturesome and…oh, very well, on with the verbiage.

Hitting our shores now are a flight of 40g packets bearing the Peterson marque. The pouch is more prevalent packaging for the European market; in the States it’s gaining traction though, thanks to the resurgence of roll-your-own in the past decade. The blends are all new inflections bearing romantic Irish names: Aran mixture, a tobacco-centric light vanilla; Connemara Black, a tart cherry Cavendish; Irish Dew, a stalwart Virginia-burley; and Wild Atlantic, a salty yet mild English blend. The art on the packages looks great, and the overall presentation of the fine ribbon contained in the blends is effective at invoking a tone from the start. All offer a moderately complex smoke, flavorful with good leaf, ready to pack and smoke straight from the gold-lined pouch. Aran is a light, nutty take on an ever-so-lightly cased vanilla, great for an afternoon on the go. Connemara Black is akin to another of my Peterson favorites, Sunset Breeze—the topping rides atop the Cavendish, a fine duet and a good dessert smoke. Irish Dew is nutty and clean, a no-nonsense tobacco that makes a great companion for a cold beer or tea. Wild Atlantic isn’t nearly as tempestuous as the name would imply; it’s rather on the mild side, but with a full-bodied and comfortable English flavor. They’re all good, easy-going blends, and I’m very interested to see how these work out for Peterson in the North American market. My buddy Conor from Peterson was kind enough to send pictures of the packets suitable for framing, and also some glamour shots of the Peterson seasonals—here’s a sneak peek at this year’s Holiday Season blend! 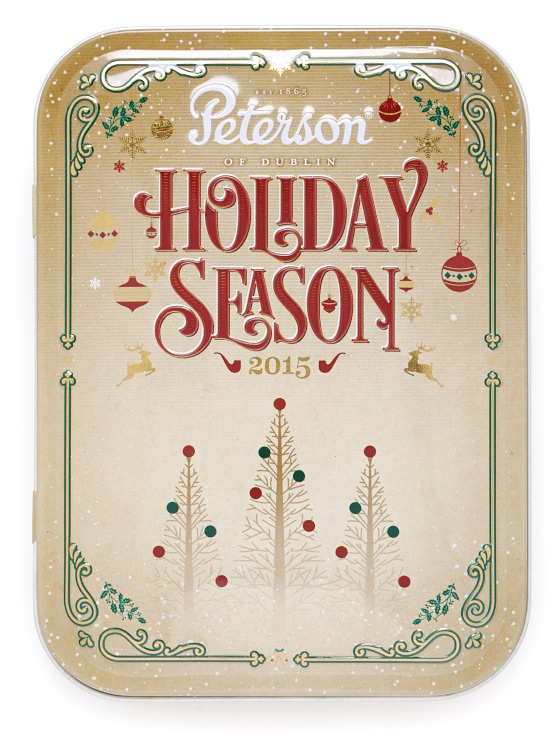 Want to get in on this? First, if you’ve tried the tobaccos reviewed, leave a comment to let us know how your experience was, whether similar or completely different. It’s always good to bounce ideas off fellow smokers to more fully flesh out one’s own experience. Second, if you have a suggestion for another reader review, leave that in the comments below too, and if selected you’ll receive a few ounces of recent blends to taste for yourself. Special thanks go out to readers JackSwilling and SettersBrace for these submissions; I’d have reviewed all the suggestions, but there’s only so much one guy can smoke at a time. And watch this space for the upcoming review of Seattle Pipe Club’s Potlatch! 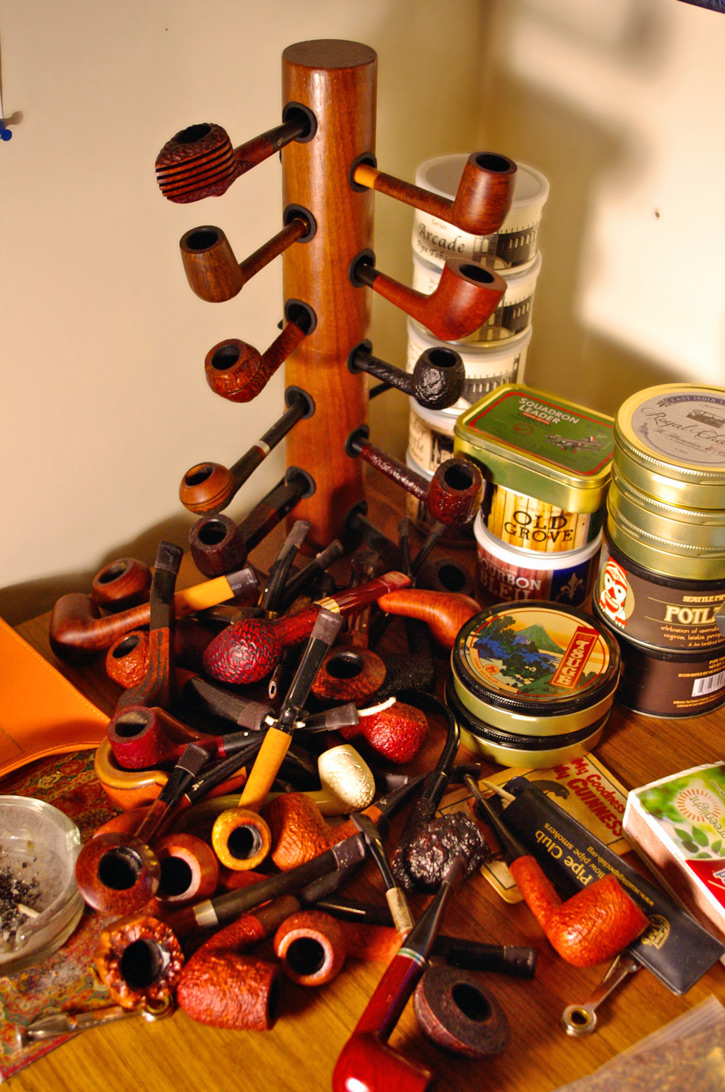 The spoils of my labour—a lot of cleaning to do.