A Date with the Erinmore Twins 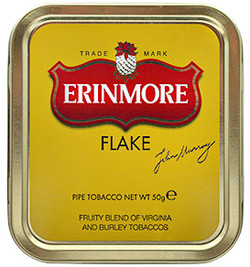 Recently here at PipesMagazine.com the focus has been on blends with long and storied, if rather peripatetic, histories. In keeping with this trend, this month’s review will put two more classics to the test—hot blondes replete with red lipstick. I speak, of course, of the two incarnations of the erstwhile Murray’s marque available on this side of the pond: the Erinmores Flake and Mixture. The recipe for Erinmore was originally created in the early 1920s at the Murrays factory in Belfast, Ireland. Purportedly several individuals including the company chemist, who is referred to by the flamboyantly Irish moniker of Daddy Burns, conceived the blend and its unique top dressing. The recipe remains a secret entrusted to only one person in a generation, at least according to company legend. Similar to the cloak-and-dagger documentation unearthed by Kevin’s investigative report on the recent Three Nuns, this is what Brian Mallen, Managing Director at the factory in the mid-90s, had to say about the recipe:

"Lots of people in the factory are involved in making the Erinmore flavour, but they’re not making it up from containers with full chemical names on them. All the products are brought under code names from a number of manufacturers, so no one manufacturer is making all the elements for Erinmore. The key to those codes I have. But there has to be a back-up, so in a locked vault in a bank in Belfast there are a number of files covering the manufacture of that particular unique flavour—if I walk under a bus someone can have access to it." 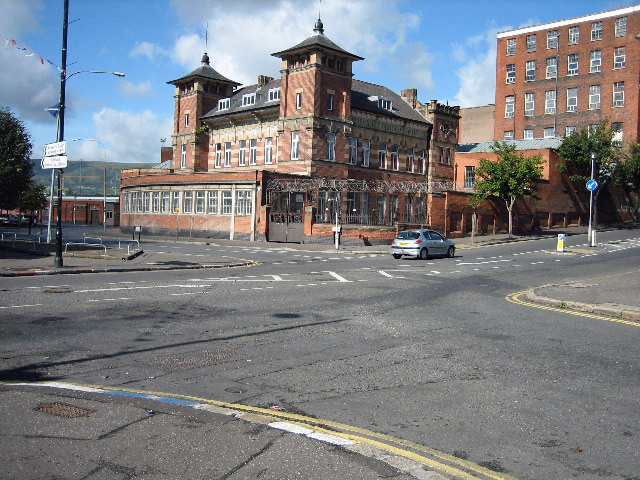 Whitehall Tobacco Works, Linfield Road, Belfast, as it stood in 2005.
© Copyright Brian Shaw and licensed for reuse under this Creative Commons License

Any agricultural product will of course vary from batch to batch, year to year, due to the fluctuating availability and flavor of leaf. Additionally, the ecosystem of commerce leads to companies being bought, sold and absorbed into larger entities; as brands change hands, they also seem to have a tendency to change recipes, at least on occasion. By all available accounts of my research, though, the recipe for the singular taste and aroma profile associated with Erinmore has remained consistent throughout its nearly 100-year span of production. Beginning with the Murray’s product, which became their flagship brand, it endured through 2005-2007 when Orlik absorbed that blending house and continued production of their blends, which included many of the Dunhill stable of brands. Now a property of the behemoth Scandinavian Tobacco Group, it is produced in Denmark, still at the Orlik factory. For more information see the video tour of the factory that Kevin took with SmokingPipes.com’s Sykes Wilford a couple of years ago.

But back to Erinmore and that signature topping. What is it? A common misnomer is that it’s pineapple, owing to the prominently displayed image of one in the Erinmore shield logo, and perhaps the bright yellow field of the label. Another quite common association is to Juicy Fruit gum, a candy that has enjoyed a similar longevity in the market, being introduced in 1893. This was a rumor I’d hoped to dispel with this review. However, when comparing the gum to the tobacco, I was impressed by the similarities in the aromatic notes, and must concede that more than a passing resemblance exists. The Wrigley Company is equally tight-lipped about the characteristic flavoring of their product, declining to comment for this reporter. Digging a little further, and enlisting the help of a chemist friend with a wine tasting kit, we agreed that isoamyl acetate—a food flavoring agent used to evoke banana or pear—is a likely culprit for producing that juicy, slightly floral top note for which Erinmore is known. For the purposes of this review, we’ll compare the flake and mixture preparations of the current production only, not wishing to wade into the waters of historical analysis. 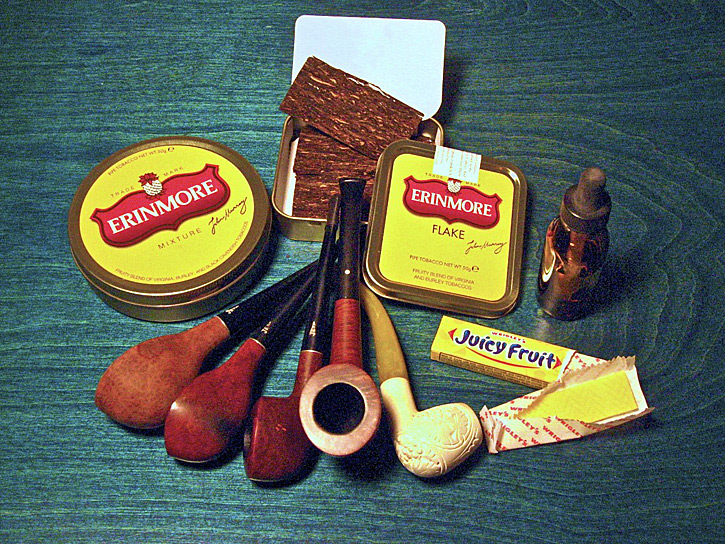 Two hot blondes, a pack of gum and a bottle of (technically speaking) booze. It’s a party!

Tin: Once opened, the bright fruity essence expands from the tin and envelopes one with the jubilant aroma. It is quite unmistakable, and can be polarizing amongst pipe smokers—many fall stolidly to one extreme of either loving or hating it. Personally enjoying quality aromatics, it was love at first light for me. The Flake, in its compact rectangular tin, is the more regal of the presentations; peeling back the gold sticker and unfolding the waxed paper wrapping reveals two dozen dark brown sticks, flecked with brighter leaf, each measuring 1/16″ by 1-1/2″ by 2-7/8″, all stacked rather precisely and awaiting your preferred preparation. The Mixture, which adds Turkish Samsun leaf to the recipe, presents as a predominantly lighter brown flecked with black bits in a comfortably loose ribbon, and with a slightly hushed version of the top note. Mixture also mentions a vanilla flavoring on the tin, and it is noticeable alongside the fruit. The iconic gold and crimson tin art is a worthy update to the historical incarnations of the logo, with John Murray’s signature added in recent years.

Char: The charring light evinces the biggest hit of the fruity topping, which commingles superbly with the bright and orange Virginias. While apparent throughout the smoke, it calms considerably after the char, where the tobaccos’ natural sweetness dominates. The flake tends toward being a bit more moist, and demands a bit of experience on the smoker’s part; suited best for tallish, slightly conical chambers when folded, it takes a few charring lights and rests to attain a good working ember, but when that’s achieved it holds the ember quite well. Mixture is at perfect moisture to pack straight from the tin, and nearly obviates the need for a charring light.

Top: Very similar to another of Orlik’s flakes, Golden Sliced, the Virginias in Erinmore Flake are the star of the show. Slight and sweet with a cool, easy burn tempered by the burley they’re pressed with, they immediately produce a good quantity of fragrant smoke. The topping is thorough, but not necessarily overpowering; a very British style aromatic, it enhances and amplifies notes already in the leaf, adding a few of its own. Not an overly complex smoke, the flavors are all explicit and well balanced, and certainly captivatingly sweet—apart from the Juicy Fruit association, individual nuances are clearly of pear, citrus, honeysuckle and even the sharply tart taste of lychee. The Mixture is a shade more muted, yet a shade more complex, and lends a delectable seasoning with the Samsun which calls to mind spiced apple cider, readily available in this season and making a great beverage accompaniment.

Mid: The pressing adds a good depth to the Flake, sustaining it through a tasty midbowl. The Mixture relies on its slightly more structured blend to carry it through, which it does equally well. Neither has a tendency to bite with calm cadence, and both produce quite a good volume of fragrant smoke which retains hints of the floral and fruity flavor, appealing to bystanders. The topping, though greatly muted after the top of the bowl, remains like honey on the palate in the aftertaste and consistently discernible in the retrohale. With tighter draft holes there is some tendency to gurgle, obviated with a change of instrument. 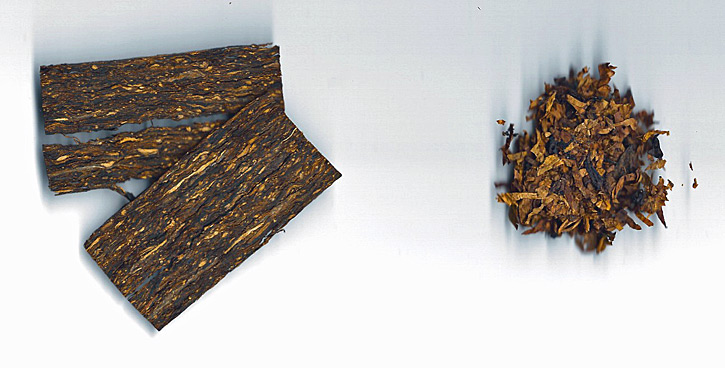 Comparing the flake to the loose ribbon reveals subtle differences.

Finish: While I wouldn’t dismiss the Erinmores as one-note smokes, they don’t exhibit a dynamic interplay or changing nuance of flavor. Their strength is in the consistency of flavor through to the heel, and they both perform quite admirably down to the ash. Both show a steady curve from the bright top to a gradually deepening bottom, all while maintaining the pleasant sweetness apparent from the tin. Overall they are both satisfying medium-bodied smokes with a good apportioning of nicotine, tart enough to sate one’s sweet tooth. Though not as thoroughly floral as true Lakeland style tobaccos, Erinmore will definitely leave its trademark ghost in a pipe; dedicated aromatic pipes are recommended.

Room Note: A good volume of smoke that carries a fair intimation of the fruity flavor the pipe smoker enjoys. I would classify this as a crowd-pleaser for those who enjoy the aroma of a pipe, and one that is singular enough to be strongly associated with memories.

Erinmore Flake scores huge points for presentation; few tobaccos look and smell so inviting, and such care is apparent in its packaging that it speaks elegantly of the contents. Additionally, the Flake is a classy tobacco to pull out and prepare in a crowd. I’ll award a perfect score here, aromatic haters notwithstanding—a 15 out of 15. Erinmore Mixture, similarly garbed though marginally less regal, earns a 14.

The flake presentation is a personal favorite, and Orlik really knows how to make them. Thin, precise and consistent, and remarkably easy to fold and stuff (particularly in smaller-sized bowls, which suit this blend best), the draw and burn is perfect for the experienced flake smoker to elicit the full flavor of the blend—34 out of 35. Mixture earns accolades for good straight-from-the-tin moisture content, an effortless light and easily managed ember—again, 34 points for the draw and burn scoring.

The Erinmores have a timeless, unique flavor that aromatic smokers can appreciate. It has endured for nearly a century, and should do well into the next. While singular for its flavor + aroma profile, it is an experience with limited depth and breadth, so I cannot score as highly here. The nicotine content is comfortable, even a bit strong for the genre, and satisfying. After much deliberation, I’ll settle on a finely shaded 38 for Flake and a 36 for Mixture, which speaks to my own preferences of course.

A confirmed aromatic fan, Erinmore has been a favorite of mine since I first tried it several years ago, and I maintain a few tins in the cellar for when the mood strikes. While not necessarily destined for aging, I always make sure to have some on hand, for there is really no comparable blend when one desires its unique flavor profile. The square tins of the Flake are not ideal for longer term storage, and never seem to last more than a year in any case; the round tins of Mixture, though, with its solid structure and Oriental component, should do well for more extended periods.

Flake: The leaf tobaccos for Erinmore are selected from only premium tobacco growing regions of the world. The blend consists of mature Virginia, mellow Burley and sweet dark air cured tobaccos. It is pressed into cakes, aged and cut into slices providing a mellow and cool smoke with a flowery and fruity note.

Mixture: A subtle mix of Danish Dark Cavendish, Burley and Virginia enriched with matured Samsun from Turkey. Vanilla flavours create the soft sweetness and fruity character of the blend. Rich in contrast and with a perfect balance of aroma.