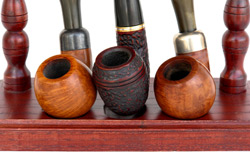 I’m sitting by the pool at my company retreat in Puerto Rico fifteen feet behind the rest of the company. They’re solving complex issues essential to the company, but I’m enjoying some MacBaren Old Dark Fired in my fifty-year old estate Missouri Meerschaum that I purchased off of eBay about two years ago. Priorities and all that.

The sun on my back is a wonderful escape from the ice storm I found myself stuck in the middle of in Kansas last week on the way home from Thanksgiving. I hope your pipes, and over-consumption of Latakia, kept you warm through the holiday.

One of my coworkers asked me last night why they were called “Corn Cob Pipes”, to which I answered, “Because God wanted to give to man a glimpse of the things we’ll have in heaven.”

The confused look on my co-worker’s face reminded me we’re due for our next column. Thank you for submitting questions, please keep them coming (use the form below).

I like getting free things. I would like to get free tobacco and pipes, but I seldom do except maybe on birthdays or Christmas. I can’t seem to free up enough money to buy these things without my wife finding out, and I just can’t steal them! So I was wondering how I can get more free pipes and tobacco, cause it would make me really, really happy. Also, if you use this question, do I get some kind of free prize?
Sincerely, Cheap Bastard 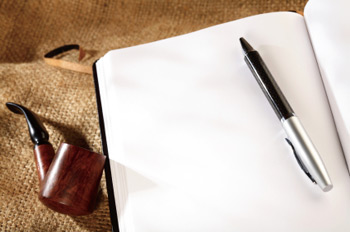 I’m sorry to hear you’re not comfortable enough with your stealing skills to go that direction. As far as quickly building a good collection of artisan pipes there are few other methods so efficient. That said, discussing some legitimate ways to obtain quality pipes is probably worth my time.

There is always the route of participating in online contests, be they Youtube contests, or the monthly caption contest offered here on PipesMagazine. I have attempted this myself, but I unfortunately find there are people out there substantially more clever than myself. So I seldom am awarded pipes purely for “wit.”

The way I see it here are the three best methods to go about this:

1) You can buy a lathe for the price of one artisan pipe and learn to carve. If you’re semi-competent you might build a decent pipe collection for relatively cheap within just a few years. You probably won’t be able to sell any at first, but with some charisma and flashy graphics you might eventually fool a few of the uneducated at a pipe show and trade for something better than your own handiwork.

2) Blackmail a prominent pipe collector (claim you have pictures of them smoking Mixture 79 and obviously enjoying it).

3) Find a country crossroads (this has to be two dirt roads, pavement simply won’t do) and head there at midnight. There the devil will meet you and trade you a collection of quality pipes in exchange for something you have that he values. While he used to only accept souls, rumor has it he has had quite enough of those and will settle for something like your Netflix password and three bags of Borkum Riff tobacco. Even he wants off of Comcast, and you probably can imagine how he enjoys tongue bite.

As for what you get for our using your question in this month’s column? I’m sorry that all I can offer is the deep feeling of satisfaction you’ll get from seeing it used on Pipes Magazine. That, and the ten pipes I’m totally going to buy you when we meet up at the next big pipe show.

Distributing mediocre ideas to the masses since 2015,
Hank

I’m terrible at buying gifts for my wife. One year I bought her a leather belt from a grocery store. I honestly thought she’d like it, but really I’m just that bad at gifts. Rather than struggle the whole season for ideas just to fail, I want to know, is there a way I can I buy a pipe for myself but give it as a gift to my wife for Christmas?

Yours,
The Leather Belt Guy 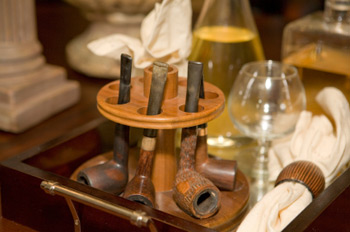 Like with most things with your spouse, it’s about the long game. If you go straight out this year and buy her that green Peterson pipe you’ve had your eye on, you’re looking at a whole world of hurt. However, if this year you buy her an iron and a vacuum, then when you gift her a pipe next year she’ll be so thankful for the improvement she might even share a bowl or two with you.

Then again, you could always do what I did, and just buy worse and worse gifts (maybe next year shoot for some faux-leather belts from a 7-Eleven) until she asks you to stop. This method removes the heartache and frees up some budget for pipes.

Really either of the above two options are great.

Giving is better than receiving (except with pipes),
Hank

I am new to pipe smoking, and yesterday I saw a man outside of town with a big wagon of corn selling handmade corncob pipes. I decided it was time for me to start the hobby, so I pulled over at his stall. Upon making inquiries about his wares, I purchased one. I then brought it home to my brother to show him. When I took the pipe out of the box, he gasped, ” there’s a corn worm in there!” I said no its not, that the man at the tent explained that it’s an exotic creature from the country of Mylantis on the earth’s left hemisphere called a pipe-worm, and that I bought it for $50.00 to go with my new pipe. I explained that the man at the stall said that after every smoke, the pipe worm crawls through the stem and around in the bowl to clean up. My brother thinks I have been taken for a ride, but I don’t believe him. Do you think so too?
Clueless in the Carolinas

Dear Clueless in the Carolinas,

First of all, your brother is a lying sack of dried-out vanilla-flavored discount tobacco. Secondly…. he’s not entirely wrong.

You see, on the one hand, you have been taken for a ride. There is no such place as Mylantis (what is it, a place where the people live off of Scotch and Mylanta?), and there is no such thing as a “corn worm”. At least in name. On the other hand, what you’re describing does indeed exist. It has been (until now) a carefully-kept-quiet project being undertaken by the pipe-cleaner company BJ Long. The “McCleans,” (as it’s been code-named) is not yet complete and ready for mass production. And the cleaner, while very life-like, is not an actual worm. In fact it’s a small machine powered by magical energy cells called “batteries.”

Rumor has it the technology is somehow stolen from the (I hope very distant) future, a time where people no longer want to actually smoke tobacco, they simply want to feel like they’re smoking tobacco. Apparently in this future age, people will buy a tobacco-substitute in liquid form and then use a pipe-substitute machine to give them the feeling of smoking with none of the delight of actual burning tobacco or actual smoke. The “McCleans” is an experiment by the company to invent something that cleans the pipe so well that people will have reason to continue smoking traditional pipes.

Even if the McCleans is futuristic technology from more evil times to come, I suggest you find a secret place to store it when you’re not using it, treat it as a special gift, call your brother a lying pile of still-moist pipe-mud for trying to deceive you, and be sure not to reveal your true identity to anyone.

You know when people win the lottery and end up getting killed because their friends fight over their money? Imagine what would happen to you in your sleep if you’re friends ever found out this was why your pipes smoked so clean.

Let’s agree to never speak of this again. 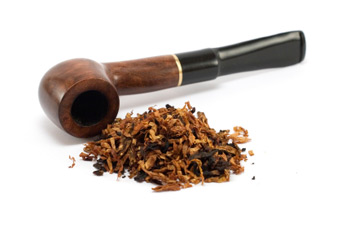 Long time reader, first time writer. My uncle lost the tip of his right ring finger in the war (I have no idea which war) and as a result he has a little synthetic nub on the end starting where his last knuckle would be. When people are watching, he’ll just stick that finger in his pipe to tamp since it has no feeling, but looks real. People are always impressed and he never tells any of them what’s really going on. He just smiles and says, “It’s my tamping finger, when you’re man enough, you’ll have one too.”

I want a pipe-related party trick of the same sort, but preferably without going to war or losing a finger. Any suggestions?

Nope. It sounds like your uncle was a badass. That can’t be faked.

Then again, I don’t think you would have spent the hours you did thinking about, writing, revising, and submitting this question just to have me tell you to no. Therefore, let’s consider this. I recall hearing that, in the 20’s, flatulence related pipe tricks were all the rage. Those were different times though, and now you’ll hardly get a reaction worthy of your time investment from practicing any of those. Unless you never smoke in mixed company.

Learning to blow rings through rings, is rather widely practiced these days and is too over-attempted in windy settings to impress anyone.

With these considerations, I have two good suggestions for you.

1) Learn to smoke the bottom of your pipe hot enough to make a marble sized ember out of the last of your tobacco. While you’re heating up this last lump, pack another pipe, and then before the first pipe burns out, turn it over and dump the burning embers from one pipe to the other and therefore light the second pipe with the dying embers of the previous.

While people stand in awe, claim you haven’t used a match in over three months (leave people to wonder what you do while you sleep, if you answered all the questions it wouldn’t be a “trick”).

2) Practice packing your pipe until you can do so without need to discuss your pipe-packing methodology, your taste in briar, or why you chose the tobacco you’re smoking.

This will literally blow people’s minds. But I’m not sure it can actually be done.

Packing the right way, smoking the best tobacco, and tamping with my toe,
Hank

And with that. I’m out. See you next month.